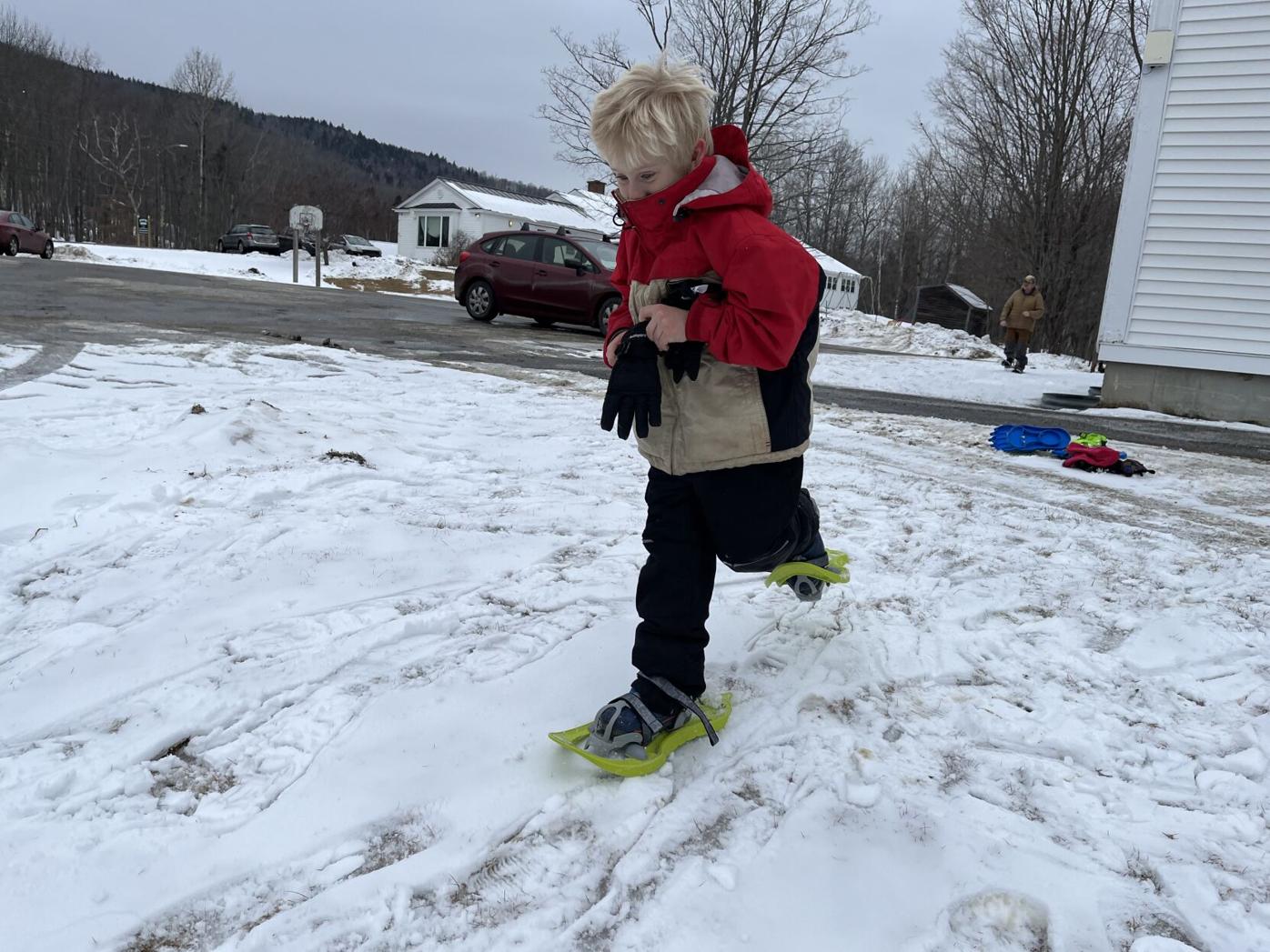 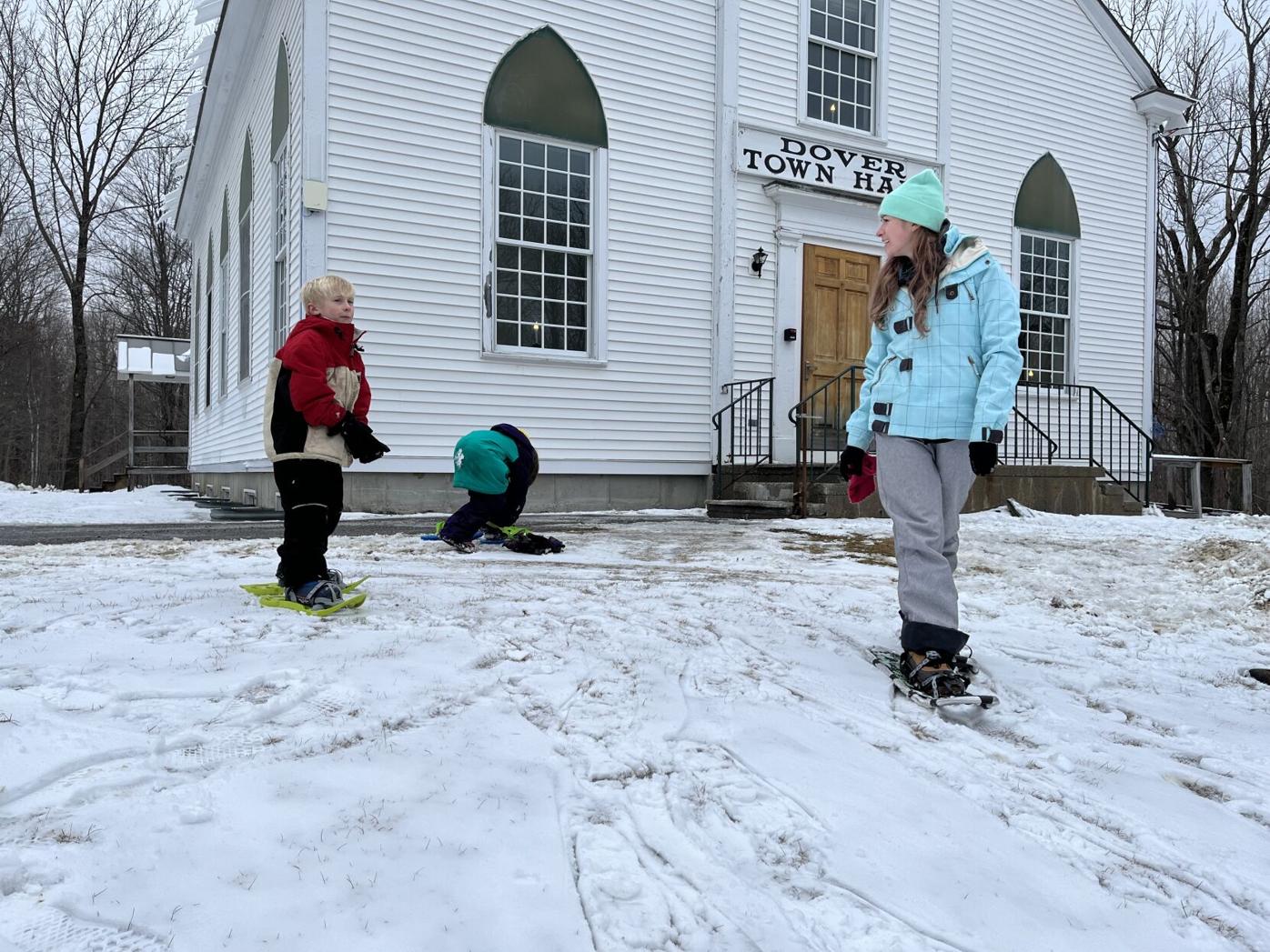 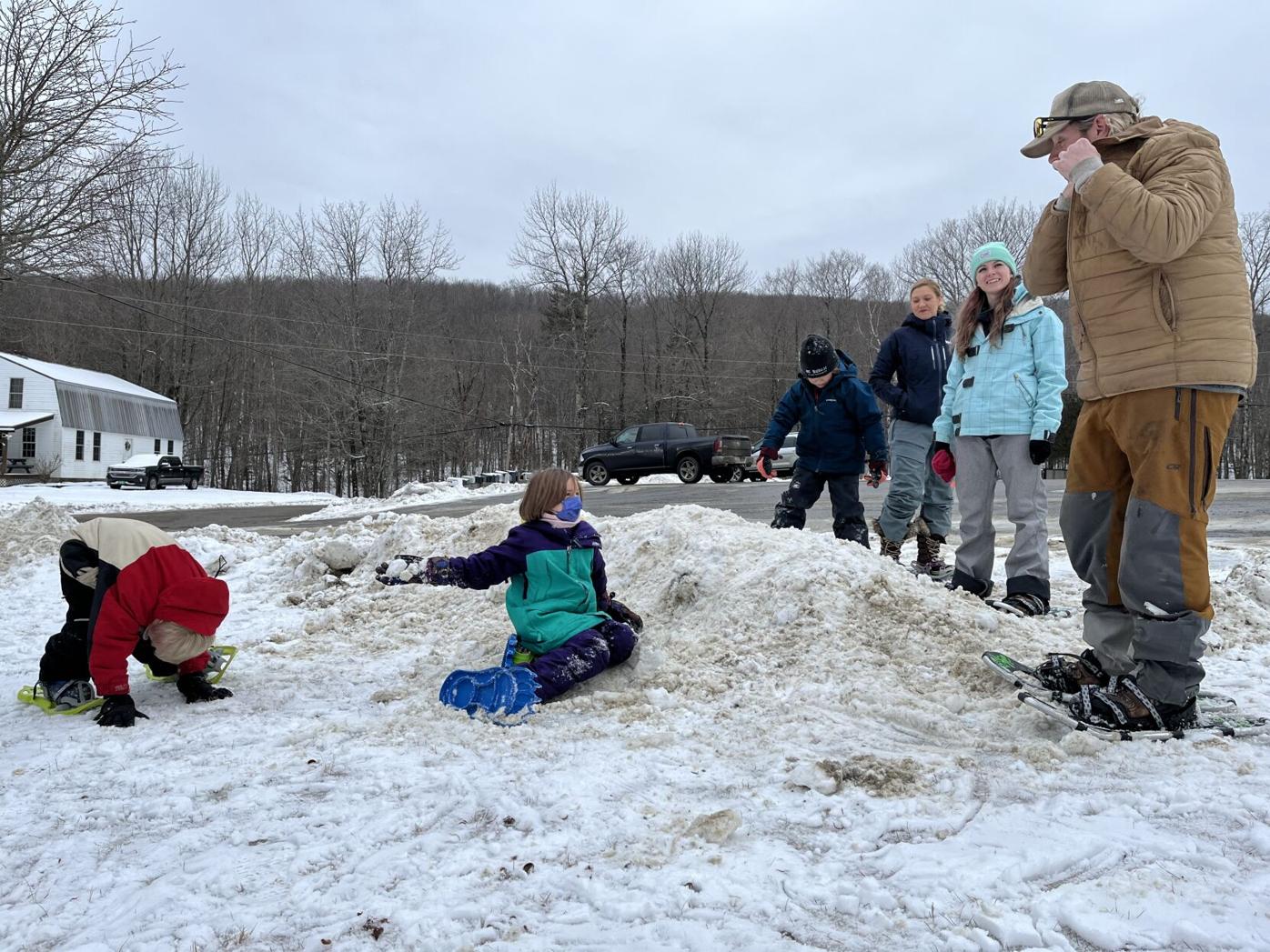 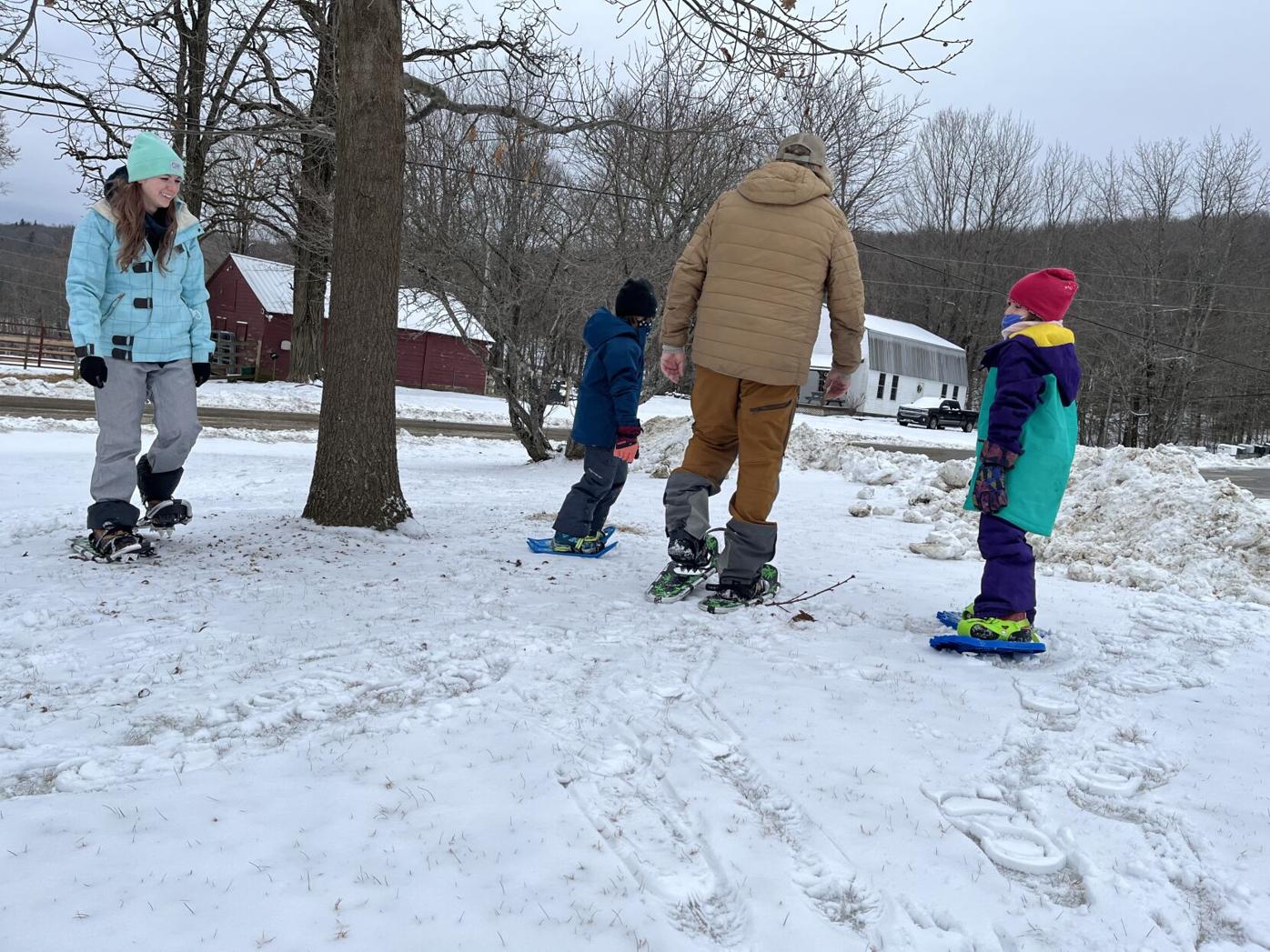 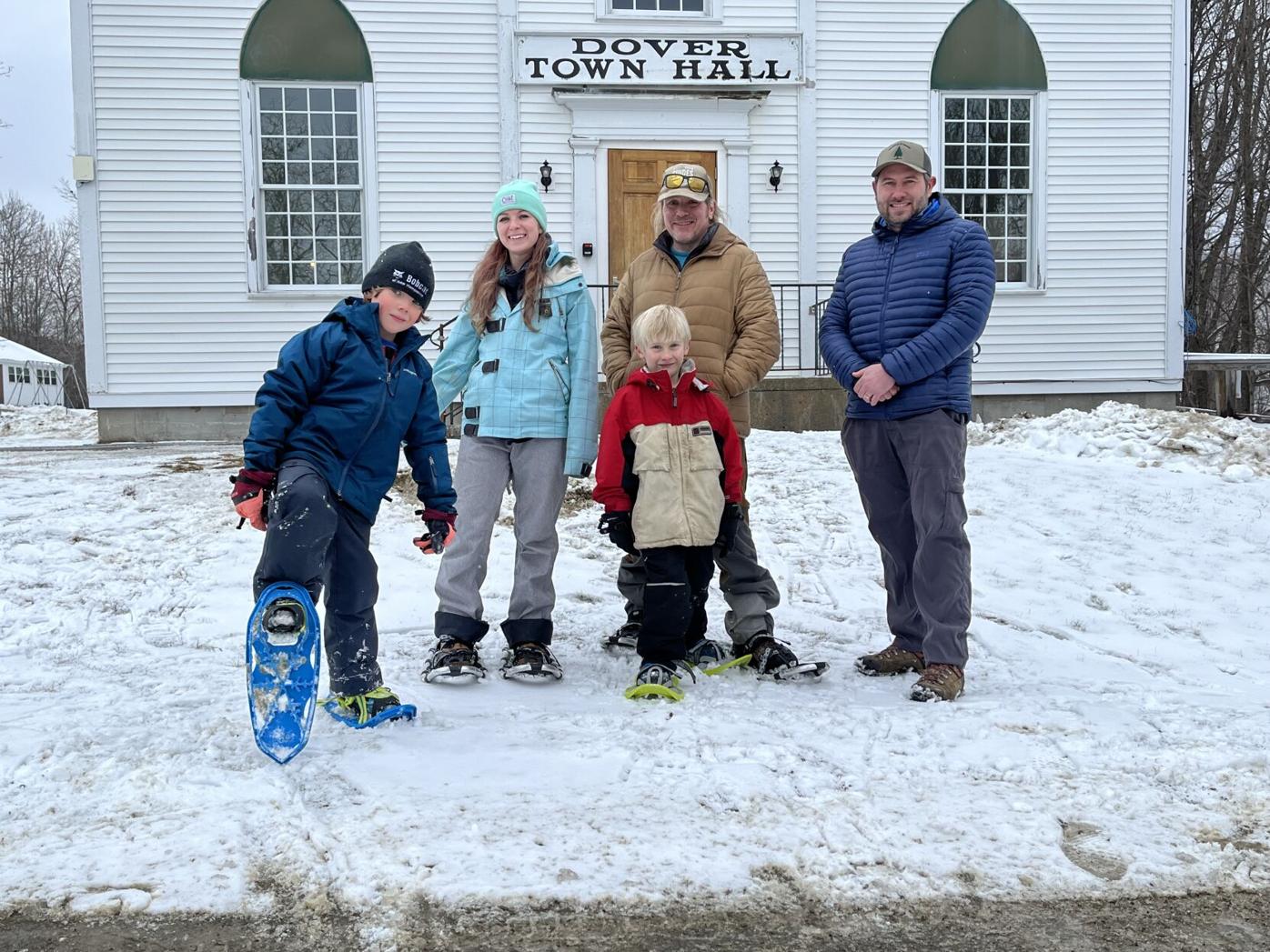 DOVER — Southern Vermont Trails Association’s new Winter Adventure Program kicked off this week with students getting used to clomping around on snowshoes in circles around Dover Town Hall.

Steve Petrik, executive director of SoVTA, said he always envisioned running camps and programs since the organization’s inception a few years ago.

At the Dover Trails and Recreation Committee meeting Tuesday, Tom Oakley of SoVTA said the new camp would provide Dover School students with another winter recreation activity other than the Mount Snow ski program, which has been the school’s traditional program occurring Thursdays during winter.

“We jumped in to fill that gap,” Petrik told the Reformer.

“It’s great,” he said. “It’s a tremendous program, however, every year there’s some children who are not going to ski or snowboard. Entry into that sport is a roadblock or maybe just getting to the mountain is a roadblock.”

Oakley said his organization wants to provide an alternative “fun thing to do in the afternoon.” Dover Economic Development Director Eric Durocher called the new program “awesome” and “a great opportunity for our youth to be out there using the trails.”

Snowshoes were donated by a parent organization, Oakley said. And in the future, he would like to add more activities to the program.

A syllabus says the program is “focused on introducing students between the ages of 7 and 14 to responsible backcountry and trail usage as a means to promote healthy lifestyles.” The program is free for students living in Dover.

“This program empowers Vermont youth to enjoy an active, outdoor lifestyle during the winter,” the syllabus states. “We hope that the Winter Adventure Program participants will develop a lifelong affinity for outdoor recreation and the natural areas of Dover while continuing to recreate with friends, family, and community members.”

The weekly three-hour program will take place in Dover Town Forest, Horace Hill and Dover Town Hall over five weeks. Petrik said he hopes for a large snowfall over the weekend so the campers could go to Horace Hill next time.

About seven students are anticipated to participate in the program this winter. One who attended Thursday said he tried snowshoeing before.

“I do it every year,” said Kaleb, a fourth grader.

Petrik said his group will be hiring more instructors.

“We are so excited about this new partnership with the SoVTA,” Dover School Principal Matt Martyn said.

Martyn credited Tera Adams, a parent of one of the school’s sixth graders, with spearheading the program which “will offer a super fun alternative to skiing and riding for our students.”

“The kids who were planning to participate were super excited,” Martyn said. “One even brought in his own snowshoes.”