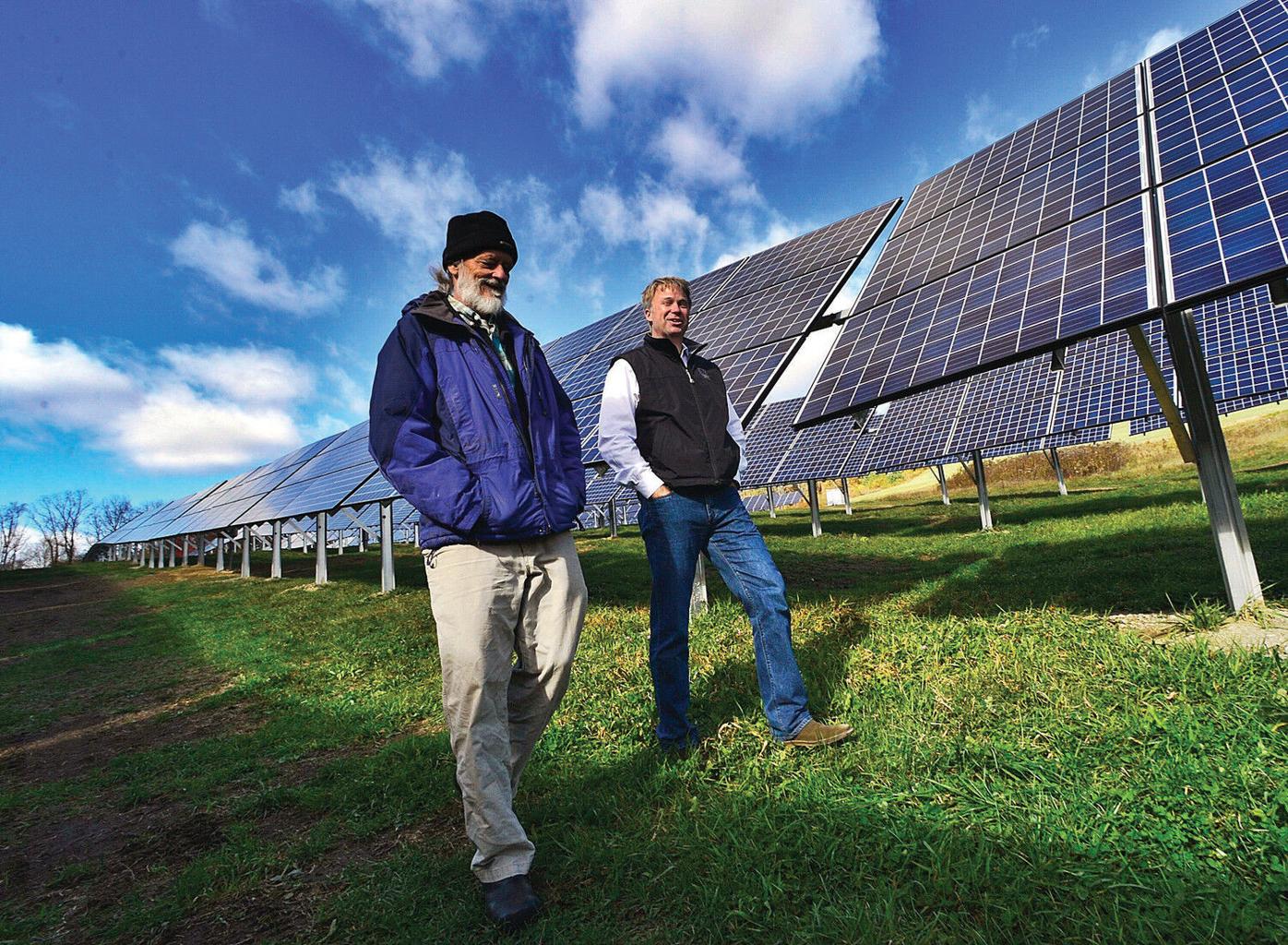 Rob Miller, CEO of Vermont State Employees Credit Union, and Peter Thurell, owner of Soveren Solar, talk about how the solar panels work during a ribbon cutting ceremony in Guilford on Oct. 25, 2016. 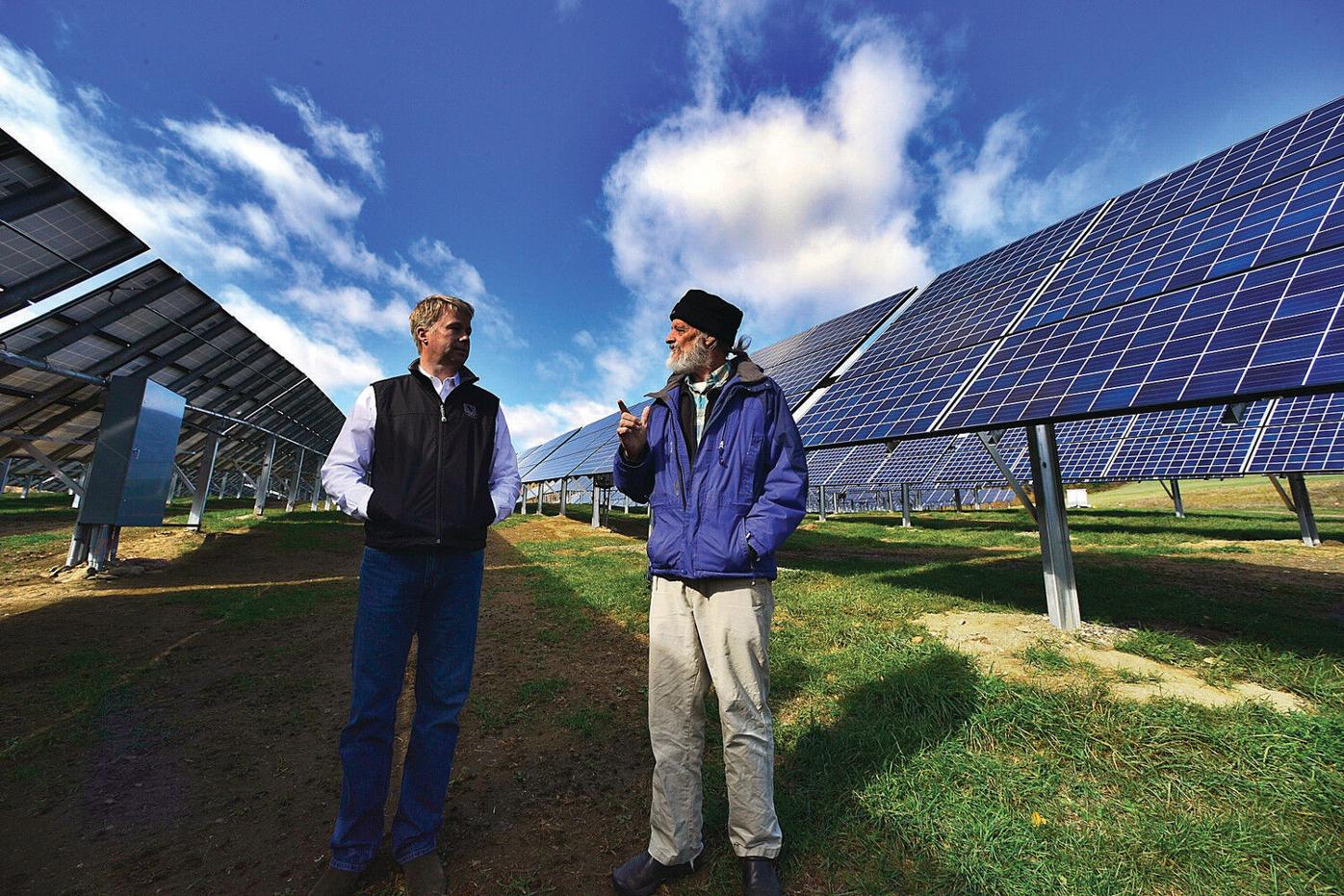 Rob Miller, CEO of Vermont State Employees Credit Union, and Peter Thurell, owner of Soveren Solar, talk about how the solar panels work during a ribbon cutting ceremony in Guilford on Oct. 25, 2016.

DUMMERSTON — Peter Thurrell said President Donald Trump's new tariffs on solar equipment are nails in the coffin — the last contributing factor leading to the closure of his company, Soveren Solar, after eight years in operation.

"It is the latest of a series of blows to solar in Vermont, and we already decided it was too much," he told the Reformer. "Not only the new [net-metering] rules but all of the hidden policy changes embedded in all of those."

Trump-approved taxes on imported solar equipment, announced last week, start with levies of 30 percent for the first three years, then fall to 15 percent in the fourth year.

Thurrell believes his Dummerston-based company invented the concept of community solar in Vermont. Residents, businesses and municipalities participating in these projects buy panels or net-metering credits to offset their power bills.

Soveren has one solar array in Brattleboro, three in Guilford, two in Townshend, two in Putney and one in North Springfield.

"We just stayed in Vermont," Thurrell said. "If I was going to try and stay in business, I would go to Massachusetts, Connecticut and New York. All of them have better net-metering rules than Vermont does."

As far as projects go, he said, "I'm pretty much wrapped up now."

"I've hit retirement age and said, 'They've taken all the fun out of it,'" said Thurrell, who estimates about 30 changes have made net metering less attractive in Vermont.

Thurrell said he decided to close down his multi-million-dollar company sometime after the new rules came out last year. He had 16 employees.

"But we saw this thing coming with Trump and we said, 'If he does that, that will be the nail in the coffin,'" he said.

One of his employees, Simon Piluski, formed his own company in Putney called Southern Vermont Solar. Other Soveren employees are joining him.

"They're going to go on and keep on trying, probably focus more on residential and relatively small business systems," said Thurrell.

Rule changes made by the Vermont Public Utility Commission last year have been unpopular among solar developers. Thurrell expressed frustration with the new rules containing a "huge financial penalty" for developers building arrays on farmers' fields. His company had leased land from 14 farms.

Thurrell also took issue with limitations around creating net-metering groups. If a customer purchased more credits than they generated in power, he said, Green Mountain Power would take the credits if they were not used after one year. Net metering is defined as "a system in which solar panels or other renewable energy generators are connected to a public-utility power grid and surplus power is transferred onto the grid, allowing customers to offset the cost of power drawn from the utility."

"There used to be ways around that," he added. "They have to buy less than they need so they don't lose it."