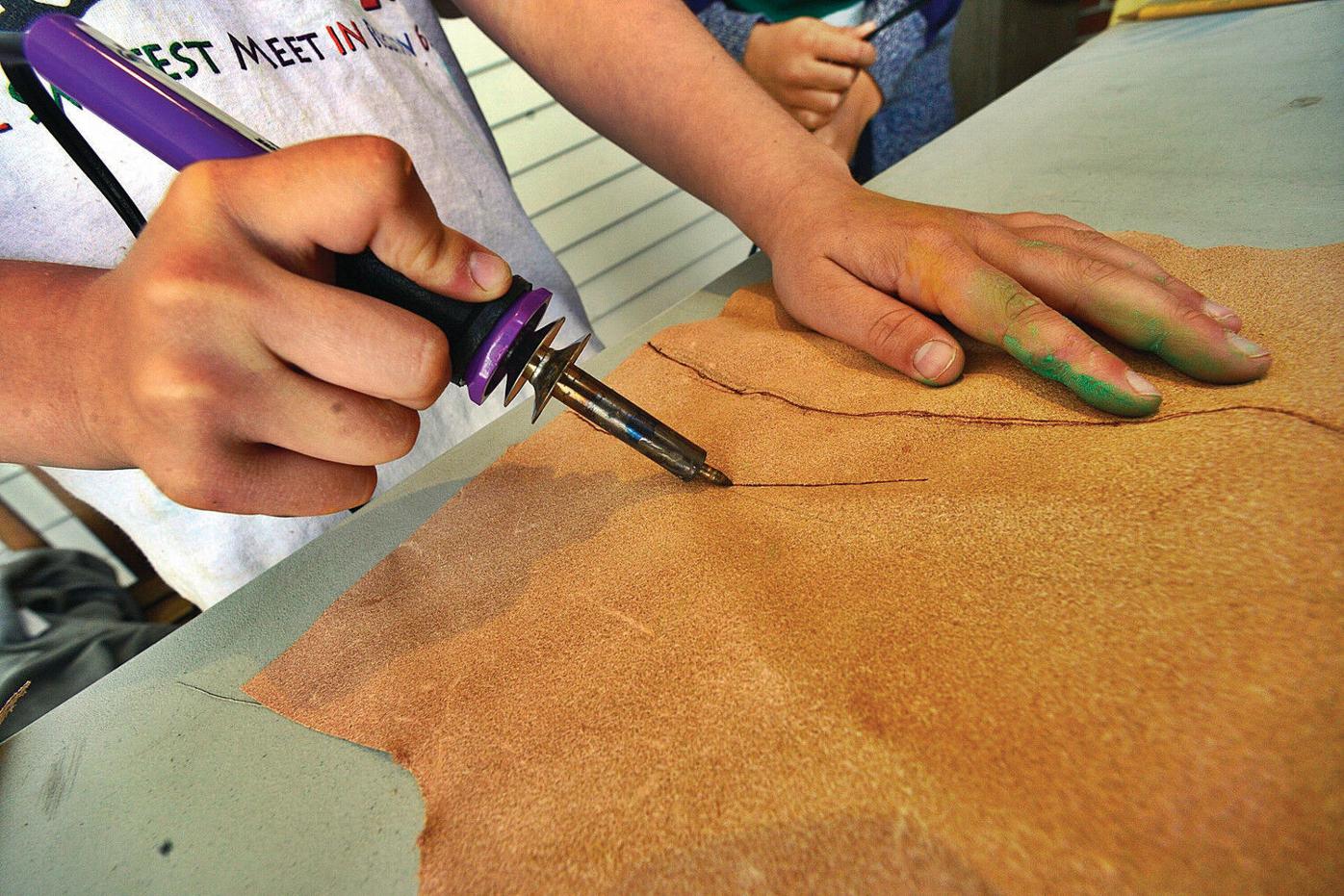 Paige Renaud, a fourth-grader at Guilford Central School, burns a design into a piece of leather during a project on eugenics on Thursday. 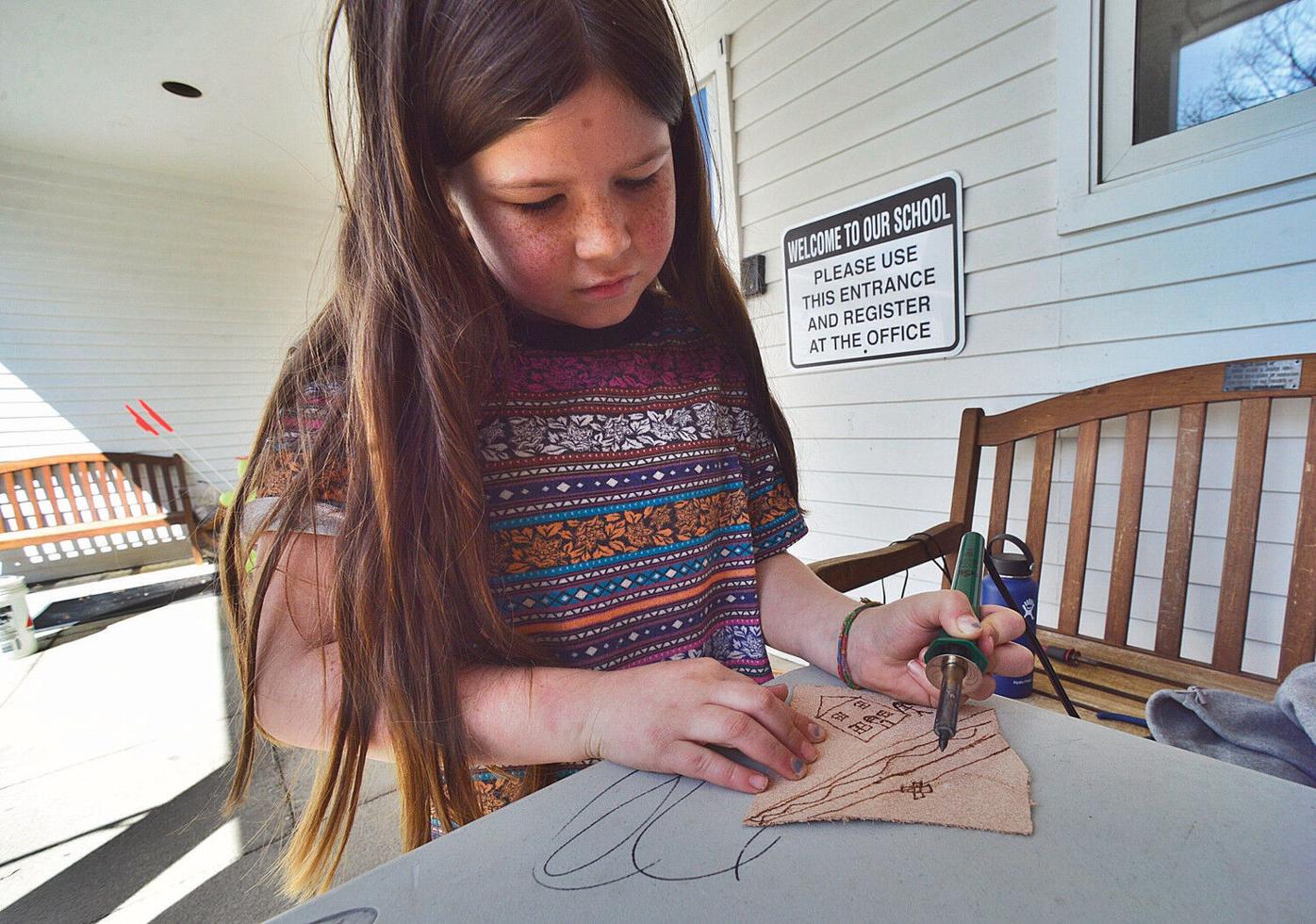 Kylie Jarvis, a fourth-grader at Guilford Central School, burns a design into a piece of leather during a project on eugenics on Thursday. 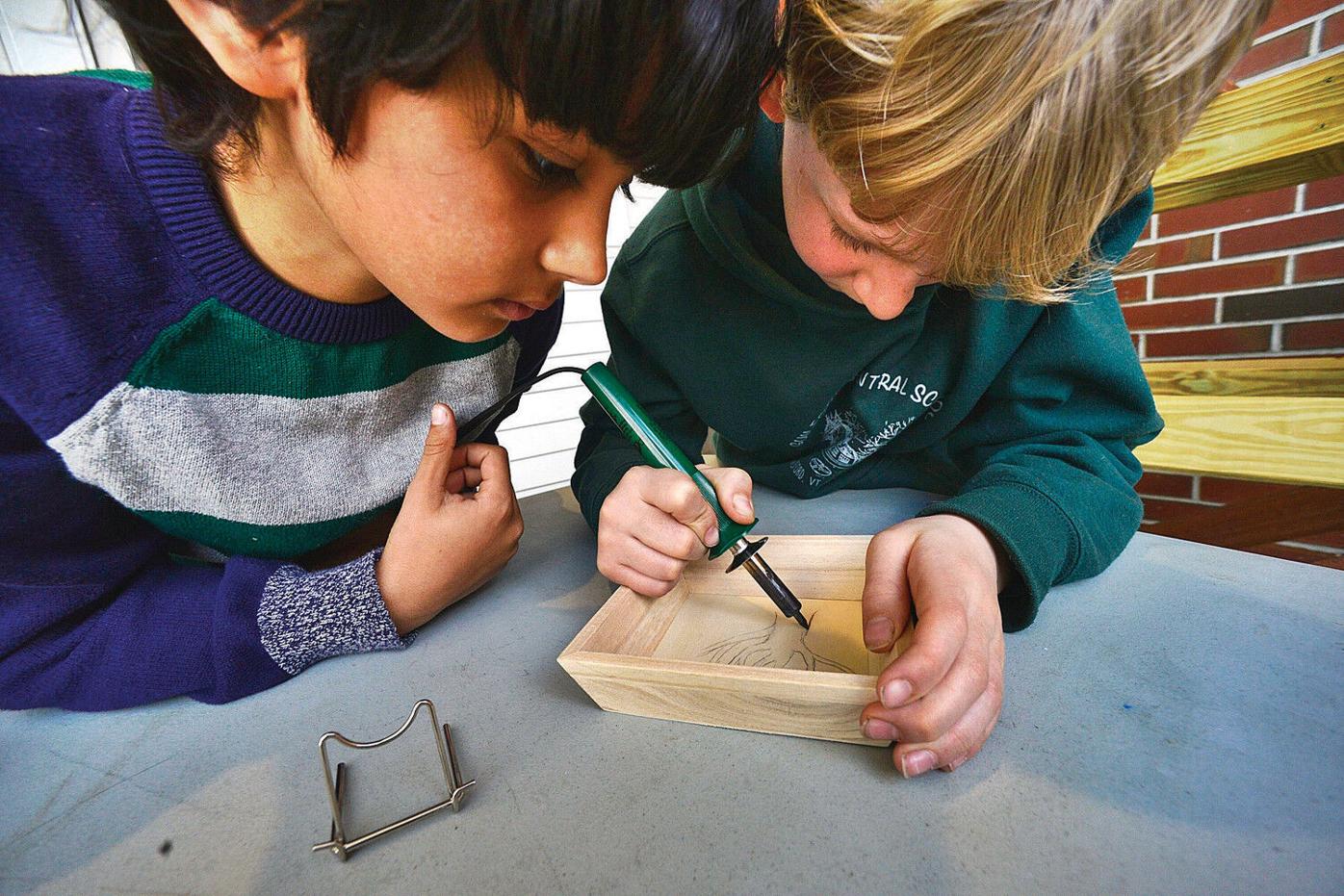 Willow Sharma watches Nico Jonathan Leach as he burns into a piece of wood a tree design for a project on eugenics at Guilford Central School on Thursday. 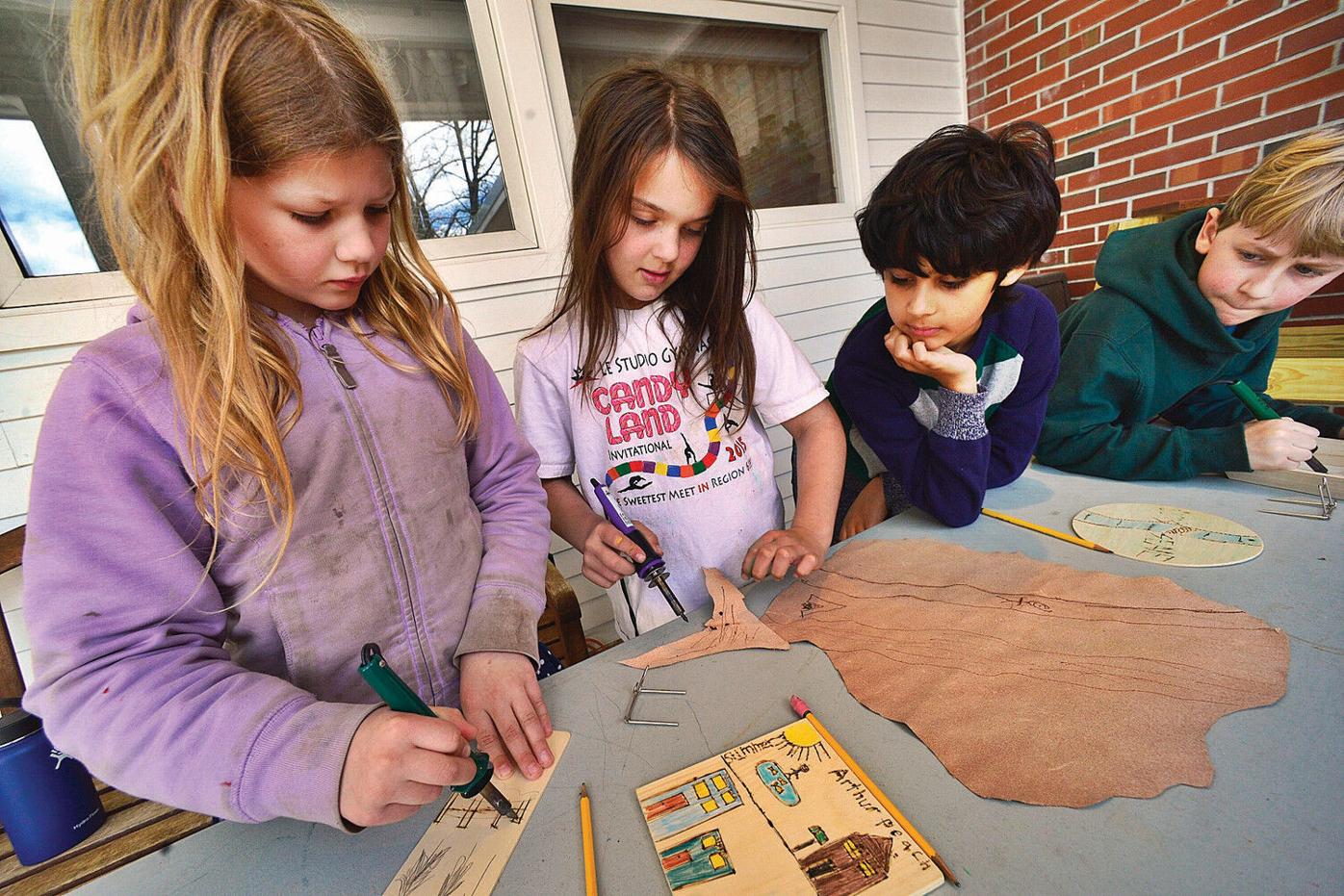 Paige Renaud, a fourth-grader at Guilford Central School, burns a design into a piece of leather during a project on eugenics on Thursday.

Kylie Jarvis, a fourth-grader at Guilford Central School, burns a design into a piece of leather during a project on eugenics on Thursday.

Willow Sharma watches Nico Jonathan Leach as he burns into a piece of wood a tree design for a project on eugenics at Guilford Central School on Thursday.

BRATTLEBORO — Between 1931 and 1941, thanks to an act of their Legislature, more than 200 Vermonters were sterilized — many of them Abenakis and French Canadians — for the perceived social crime of being "idiots," "imbeciles," "feeble-minded" or "insane."

With the hindsight of history, it's hard for many people — especially school children — to believe an official eugenics policy was written into law in the Green Mountain State.

"It's been really powerful hearing about this," said Rose Stone, a student at Guilford Central School. "My dad's part Indian, so I am learning his history."

"As a French American ... my own history could be in that," said Cooper Cooper LaFlam.

"It's a really important thing for us to learn," said Emily Matthew Muller, one of Stone's classmates. "A lot of people would just tell history as Christopher Columbus came to America and everything was fine and nothing happened. But it wasn't that way at all"

With the help of Judy Dow, an Abenaki basketmaker, Amy Skolnick and Cory Sorensen are leading Guilford's fourth- and fifth-graders through an exploration of the story of eugenics in Vermont.

"This all happened in their backyard," Dow told the Reformer during a visit to Guilford Central School on Thursday. The discussion she brings to schools allows students "to talk about the past, how it impacts the present and think about what we can do about it in the future."

The sterilizations were one of the outcomes of the Eugenics Survey of Vermont, which was organized in 1925 by Henry F. Perkins, professor of zoology at the University of Vermont. One of the missions of the survey was to provide academic support for social legislation that would reduce the apparent growing population of Vermont's "social problem group."

As a result, in 1931, Vermont passed "A Law for Human Betterment by Voluntary Sterilization."

"At a time when Vermont's population was stagnant, and agricultural towns seemed to be in decline, and the native Yankee stock was perceived to be replaced by alien French Canadians, such perceptions in the 1920s fed into concerns about Vermont's backwardness and the decline of a population of a state that prided itself for its self-reliance and ruggedness," wrote Nancy L. Gallagher in "Breeding Better Vermonters: The Eugenics Project in the Green Mountain State."

Poor and socially ostracized families were targeted for investigation of the three D's (delinquency, dependency, and mental defect). These families usually lived "outside the accepted moral or social convention of middle-class America," wrote Gallagher.

According to an overview of the Eugenics Survey of Vermont assembled by the University of Vermont, the three D's were used to target the poor, the disabled, French-Canadians, and Native Americans. Women were targeted more than men. French-Canadians and Abenakis were seen as a foe and threat to the early colonial settlers of Vermont. They represented "an insidious and continuous invasion" of Vermont and were therefore targeted. Studies done on degenerate family lines were often traced back to French Canadian or Native American ancestry and were used to target these groups.

It's especially important, Dow wrote for UNH's Center for New England Culture, because "The Vermont Eugenics Survey usually started with the children. Lists were created, that showed those children who were delinquent from school, those who received aid from the Vermont Children's Aid Society, those that missed Burlington's 8:50 p.m. curfew, and so on."

Principal John Gagnon told the Reformer the coursework is in an inquiry-based unit that includes standards connected to forming opinions, doing research using primary and secondary resources, connecting history to present day, and using multi-media tools such as digital mapping.

"This unit grew out out of the class reading 'Hidden Roots,' by Joseph Bruchac," said Gagnon. "It's a story from the viewpoint of an 11-year-old boy whose family fled Vermont escaping the Eugenics Survey, hiding his Indian identity."

Under the supervision of Skolnick, Sorensen and Dow, the students learned the basics of the Vermont Eugenics Program.

"They learned about this subjective practice that was declared a pseudo-science in 1960," said Gagnon. "It is a controversial topic, and one that captured the students interest and concern. Students connect to stories about people who are or were marginalized and it informs the development of each child's social conscience and citizenship skills."

"They've been really receptive," said Dow. "I take an approach of spiral learning. Let them form an opinion and then move on. The next year, add more details. If you do this type of learning with children, they get to learn each year something more in depth."

"We learned about the history of the indigenous people of Vermont, how they were treated and how they are today," said Willow Sharma.

"It was pretty sad that people had to go through that," added Nico Conathan Leach.

"I learned that sometimes, being Native American can be hard because some people don't give you the same rights," said Brianna Kinley. "It all goes to the golden rule. People aren't treating the Indians with respect, they are being mean and acting like they don't care."

"One of our district goals is to build a global community and global citizens," said Sorensen. "As fourth- and fifth-graders, students start to develop a sense of justice and a sense of global community. This is a perfect age to start talking about some of those things."

"We know what's actually going on in real life so we can fight against the bad people," said Stockton Woodruff.

Skolnick said she sees her job as encouraging her students to feel empowered. "They are the ones who bring up current issues in the classroom," she said. "Kids everywhere have this sense of what's right and what's wrong and how people deserve to be treated. They are the one who drive these projects because they feel so empowered."

Skolnick said she's feels fortunate to teach in a district such as Windham Southeast Supervisory Union. "We are pretty lucky to have an administration we can sit down with and talk about why we feel this is important and why we need to address it," she said. "They are open and accepting if we can show how it aligns to standards."