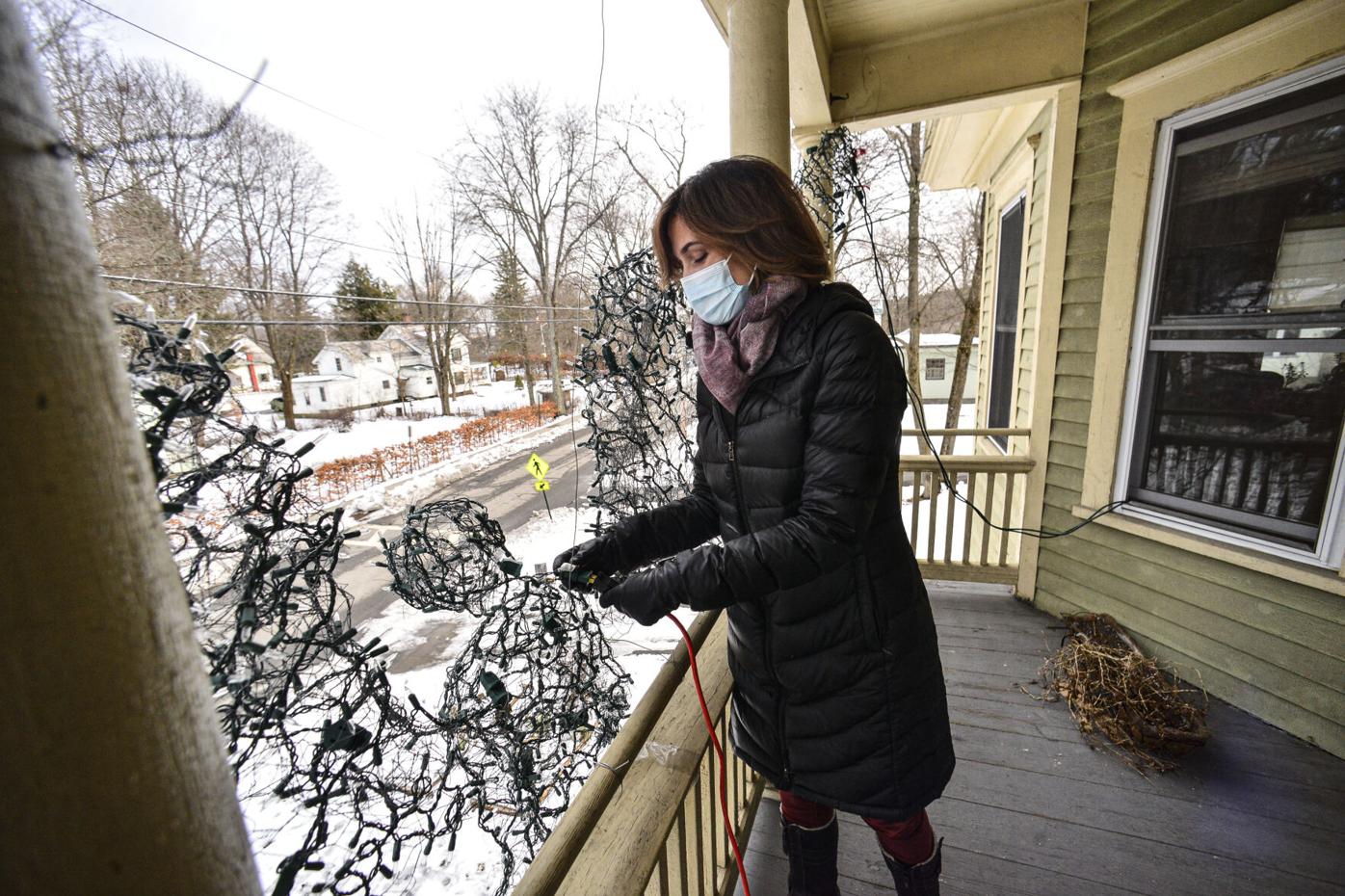 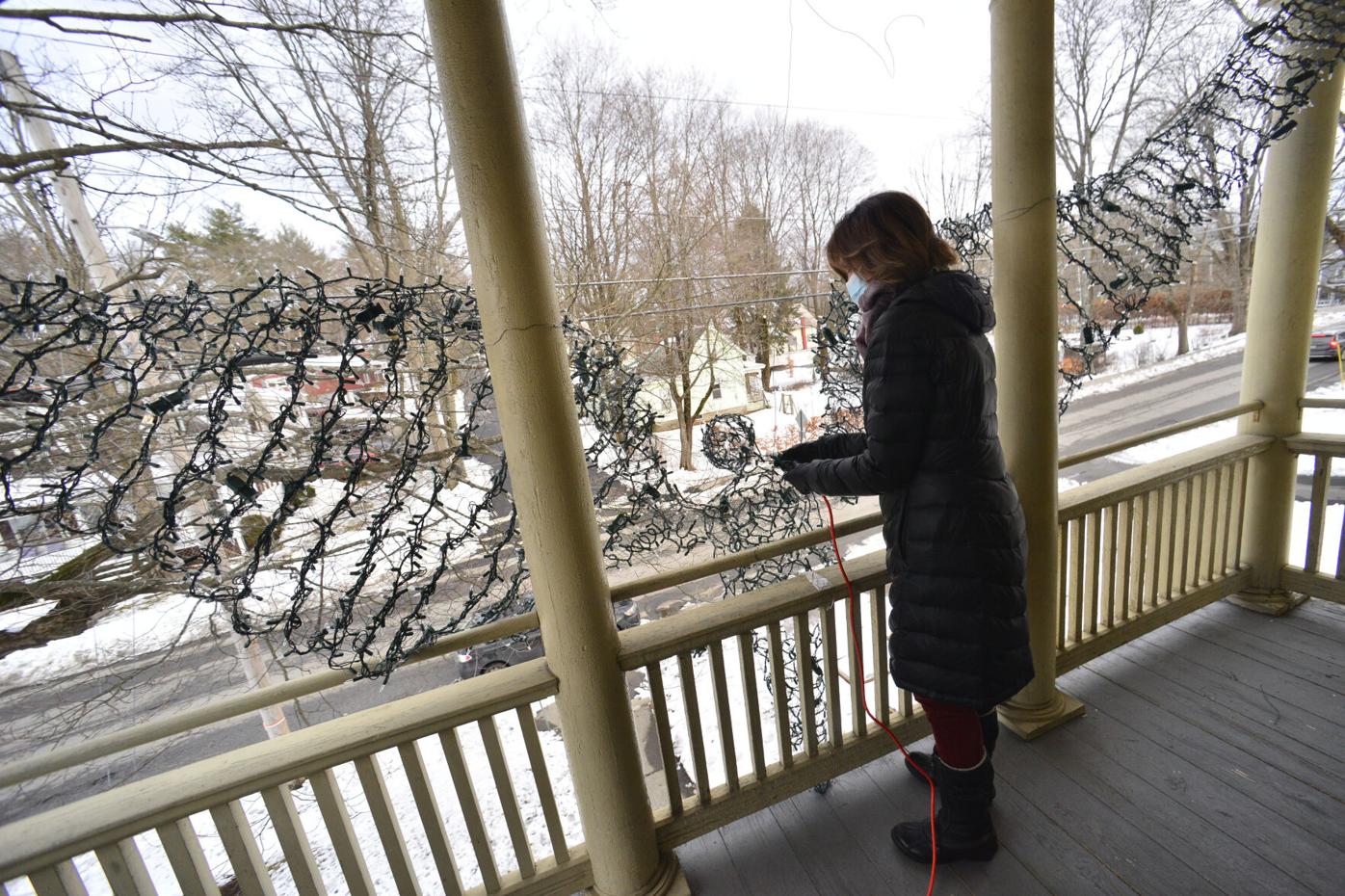 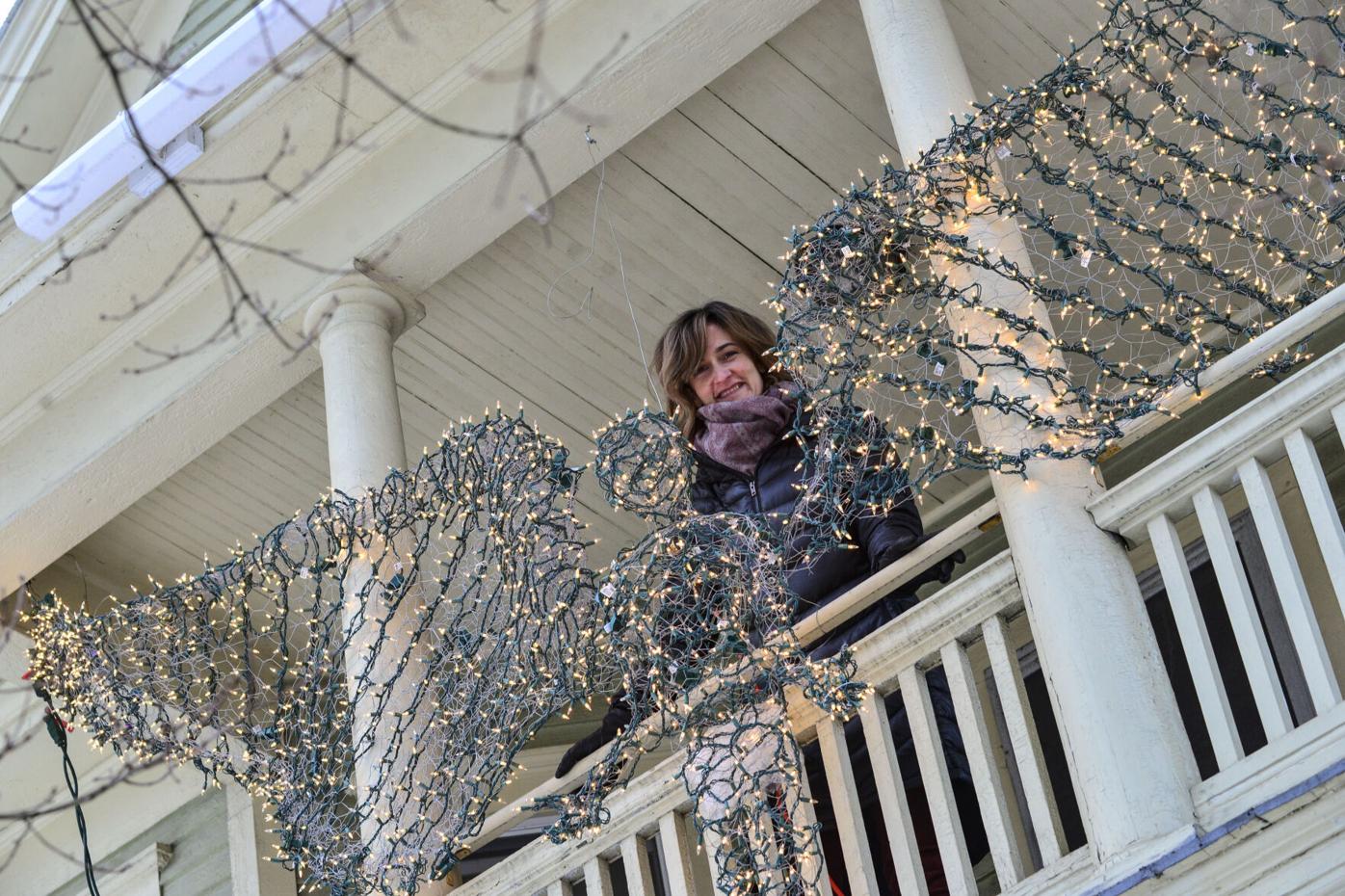 Amelia Shillingford, of Brattleboro, created the angel that hangs from her porch on 22 Canal St. 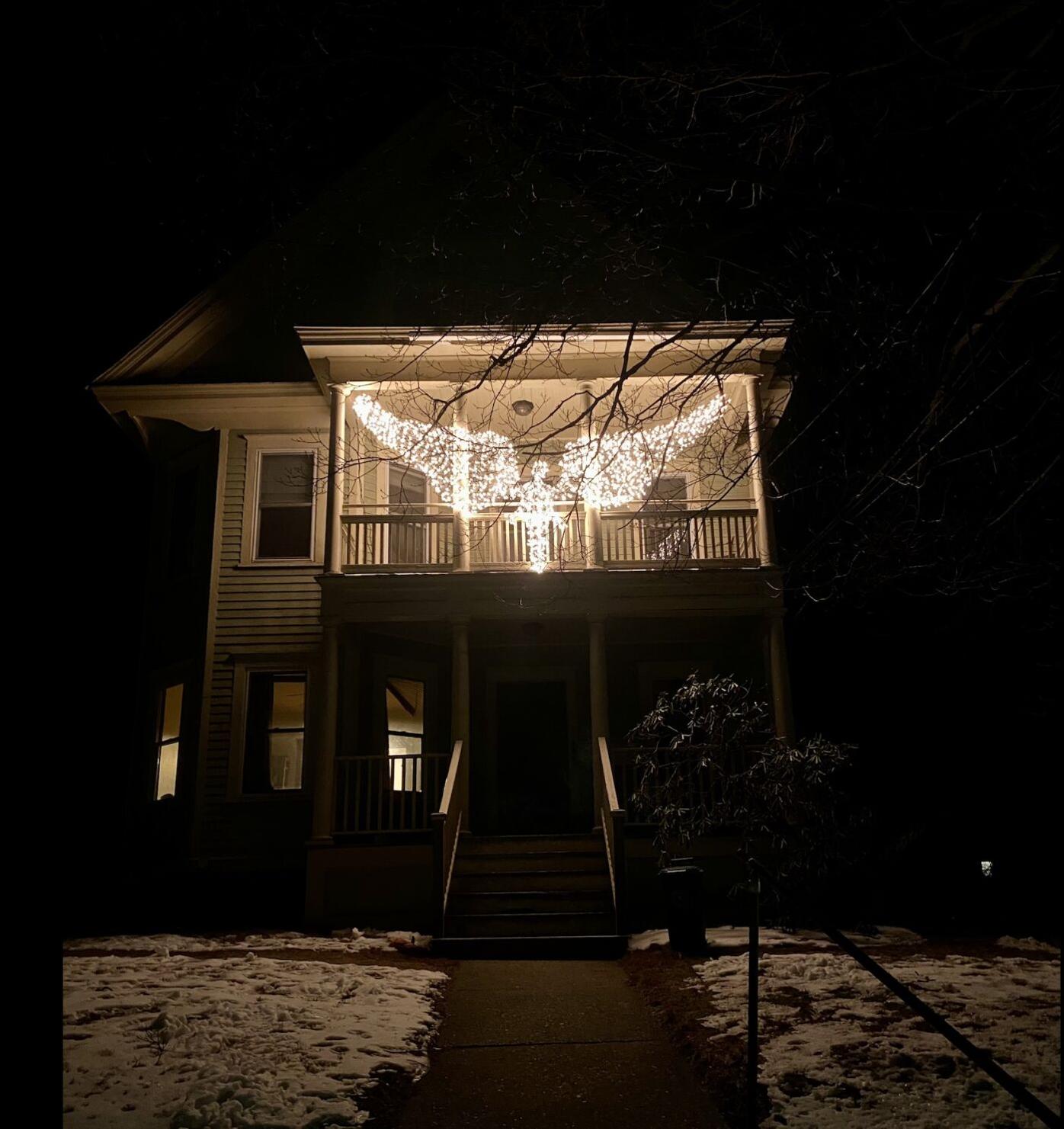 Amelia Shillingford created this angel light display in the front of her home on Cedar Street in Brattleboro. 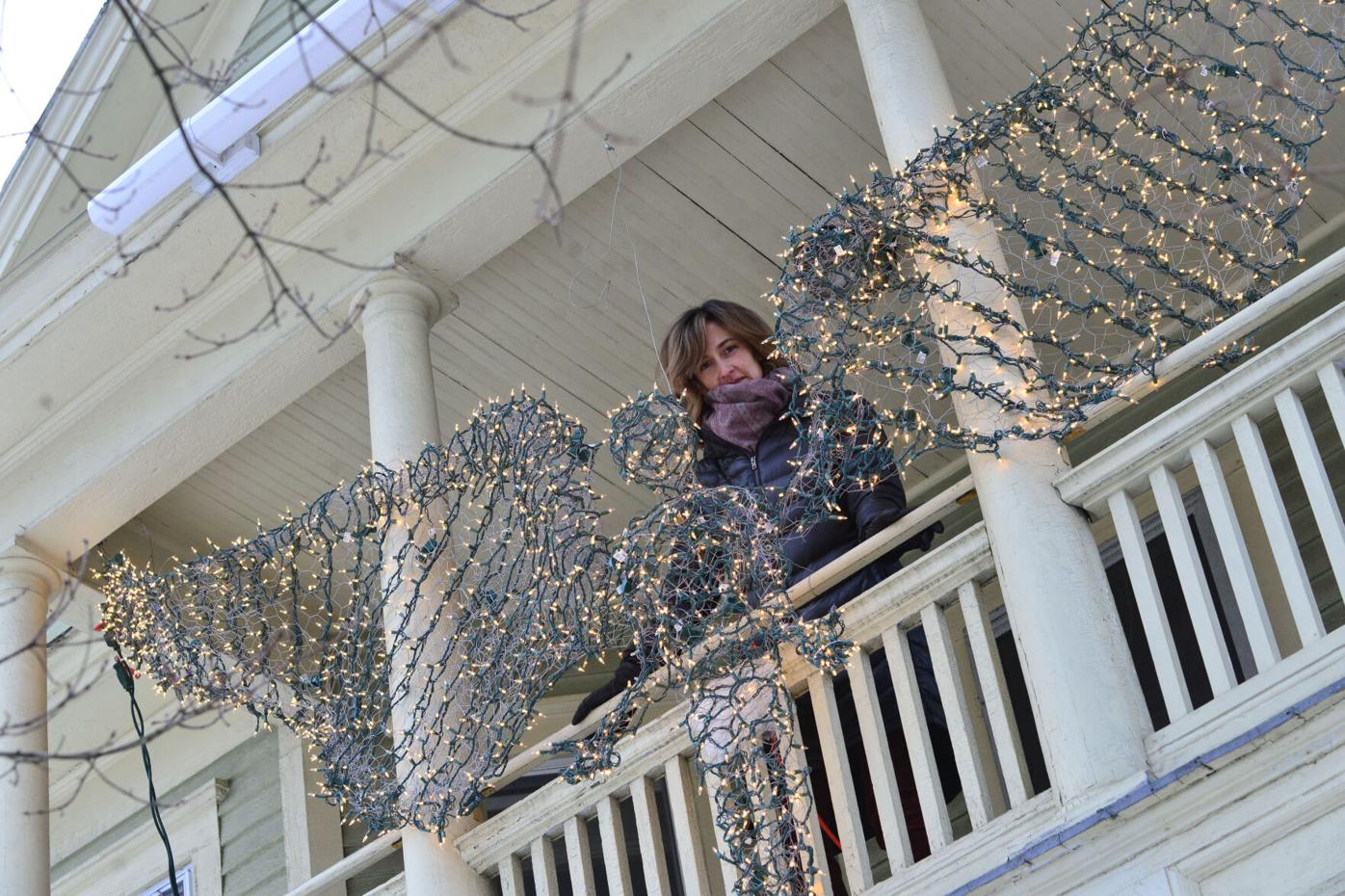 Amelia Shillingford, of Brattleboro, Vt., created the angel that hangs from her porch on 22 Canal Street.

Amelia Shillingford, of Brattleboro, created the angel that hangs from her porch on 22 Canal St.

Amelia Shillingford created this angel light display in the front of her home on Cedar Street in Brattleboro.

Amelia Shillingford, of Brattleboro, Vt., created the angel that hangs from her porch on 22 Canal Street.

BRATTLEBORO — Amelia Shillingford grew up outside of Boston, but in her heart she’s always been a Vermonter.

“Vermont is about sense of purpose. It’s about community and connection and nature and simplicity of life,” said Shillingford, who has lived in Vermont since 2011 and has worked at the Brattleboro Retreat since 2016. “I’ve always been connected to Vermont and its values.”

Shillingford spent summers in Vermont, at Aloha Camp, a girls camp, in Fairlee, where she experienced all of those things.

“I was loved and valued, not for how smart I was, just for who I was,” she said.

Over the past year, Shillingford has been, like many Vermonters and other people around the world, shuttling between work and home, bemoaning the loss of connection that has been forced on everyone due to the COVID-19 pandemic.

“It sounds a little pathetic, but I go to work to socialize,” she said. “But I am grateful to have this job. It allows me to connect in person to other people.”

Shillingford, a psychiatric mental health nurse practitioner, moved from Chester to Cedar Street in in 2018. She said she is grateful for the community she lives in, one that embodies the Vermont values she treasures.

But the break in the connection between friends and neighbors, folks at the store and on the street, has been strained and, in many cases, broken.

Shillingford said she wanted to find a way to shine back a little love to her community.

“I want people to feel hope,” she said.

Many people walking or driving along Cedar Street as the sun starts to set have gotten a little boost of that hope shining from a creation on Shillingford’s front porch — a luminous “angel” made of bright, white lights.

“I want people to feel something larger than them,” she said, “something that is driven by kindness, truth, hope and inclusivity.”

In late November, Gov. Phil Scott encouraged Vermonters to deck their communities with holiday lights to “lift our spirits” and “show the world that Vermonters are here for each other.”

“I wanted to reflect that feeling back, to magnify it, to radiate and share light and hope,” said Shillingford, who twisted figurines out of wire when she was still living at home in Milton, Mass. “That is the feeling I want to inspire in people.”

She said that, though she wasn’t looking to create an angel, she was inspired by London’s Regent Street Christmas Angels, what has been billed as London’s largest display of Christmas lights. Shillingford said she had also been watching a bit of HBO’s “Raised by Wolves,” which has a not-so-angelic character that resembles one when it flies.

She got chicken wire and wire cutters from a local hardware store, and ordered about 350 feet of lights online. With the help of Lindsey Coward, a neighbor and co-worker, Shillingford stitched together her “angel.”

“I call it an angel, because that’s the most obvious thing it looks like,” she said. “But it’s like the spirit of Vermont ... the spirit of Brattleboro.”

And Shillingford and Coward are not quitting with this one display.

“We would love to show community members how to make similar wire-light sculptures and have a collection of sculptures on the Common next December,” wrote Coward in an email.

Coward said she got inspiration from last fall’s Scarecrow in the Park, in Bernardston, Mass.

“The sculptures would be a new, beautiful and fun touch to a park many of us drive by every day,” she wrote.

Shillingford, who just turned 40, said the light display was a way to fight her own feelings of powerlessness in the face of all of the challenges and tragedies happening in the community, around the country and around the world.

“If anything, by forcing us to disconnect to survive, this virus has shown us how connected we are to each other,” she said. And that time alone in your head leads to existential questions, said Shillingford, such as “Why am I here” and “What am I doing to uphold my values.”

For Shillingford, going to work every day and caring for her patients — a relationship she terms sacred — is the most important way she can continue to connect and uphold her own values.

Despite her dedication to her patients, Shillingford knows personal time is also very important. Stringing together her angel was one way to decompress from work while sharing something nice with her community.

“I would get home from work and this was my catharsis, the artistic process,” she said.

Shillingford said she plans to leave the display up until June 20, the summer solstice. Hopefully, she said, by that time, there will be a feeling that things are getting just a little better.

Shillingford’s father, John Shillingford, went to Yale and worked at NASA, and her mother, Prentiss Shillingford, worked as an assistant director at The Aloha Camps, which she also attended as a teenager. And, in an interesting side note, Shillingford counts one of her ancestors as John Prentiss, who founded the Keene Sentinel in 1799.

Shillingford is also a graduate of Yale, as well as the Yale Graduate School of Nursing.

While her family was by no means wealthy, she said, they were able to afford good college educations for her and her brother.

“But it’s not enough for me to say I am so fortunate and then just go on about my merry life,” said Shillingford, who originally went to school to become an attorney. She called that kind of work too “adversarial” for her tastes.

While working as an attorney in Washington, D.C., she volunteered as a victim advocate with a local rape crisis center.

Shillingford said responding to hospitals, she witnessed the work put in by nurses and nurse practitioners.

“I had this ‘Oprah, ah ha,’ moment,” she said, and decided to switch careers. “I wanted a career that I believed in,” she said. “I needed to feel I was doing the right thing for humanity.”