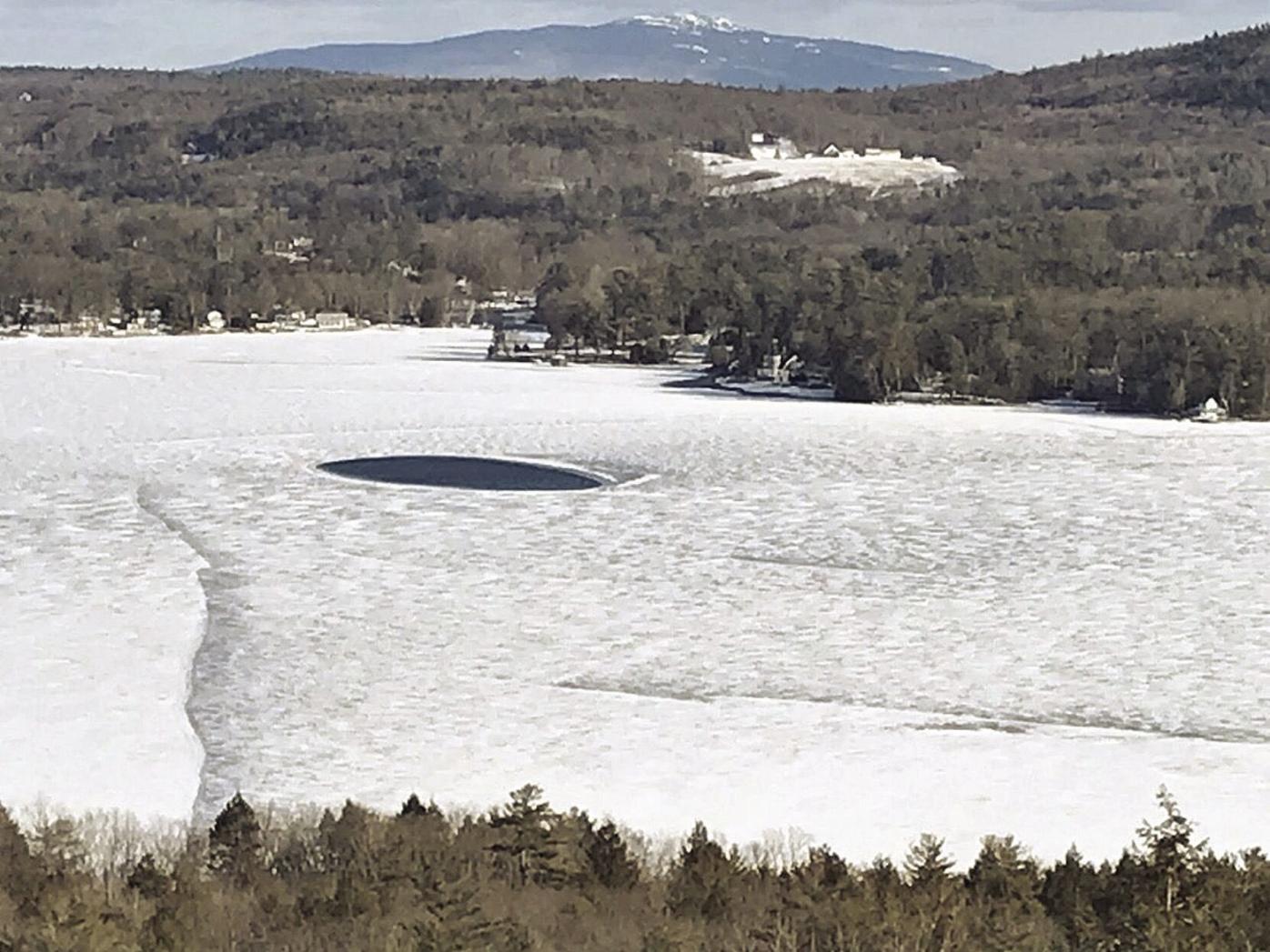 The hole in the ice at Spofford Lake as viewed from Pinnacle Springs on Jan. 23. 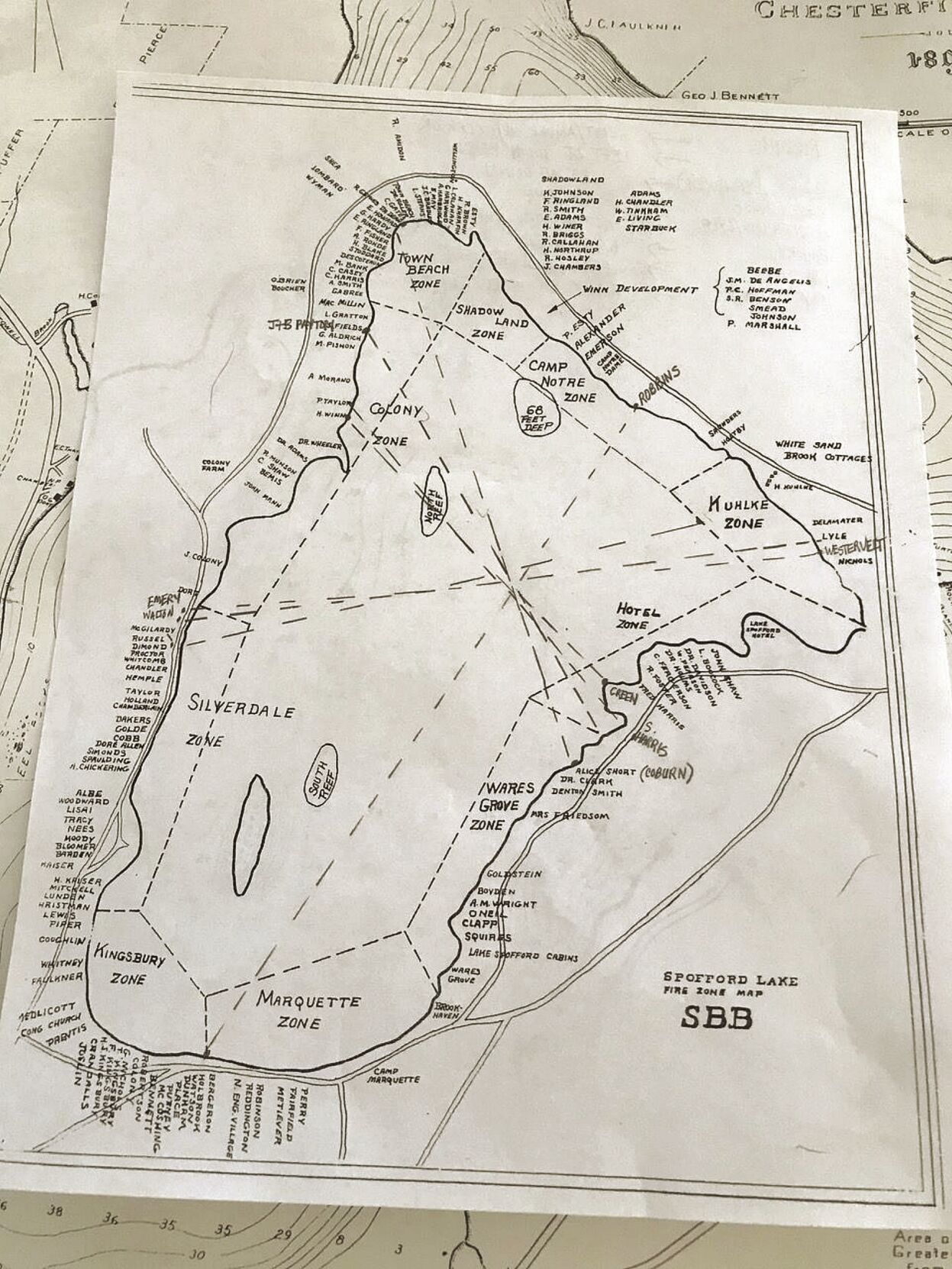 The ice hole on Spofford Lake is located near where the lines intersect near the middle of the lake. 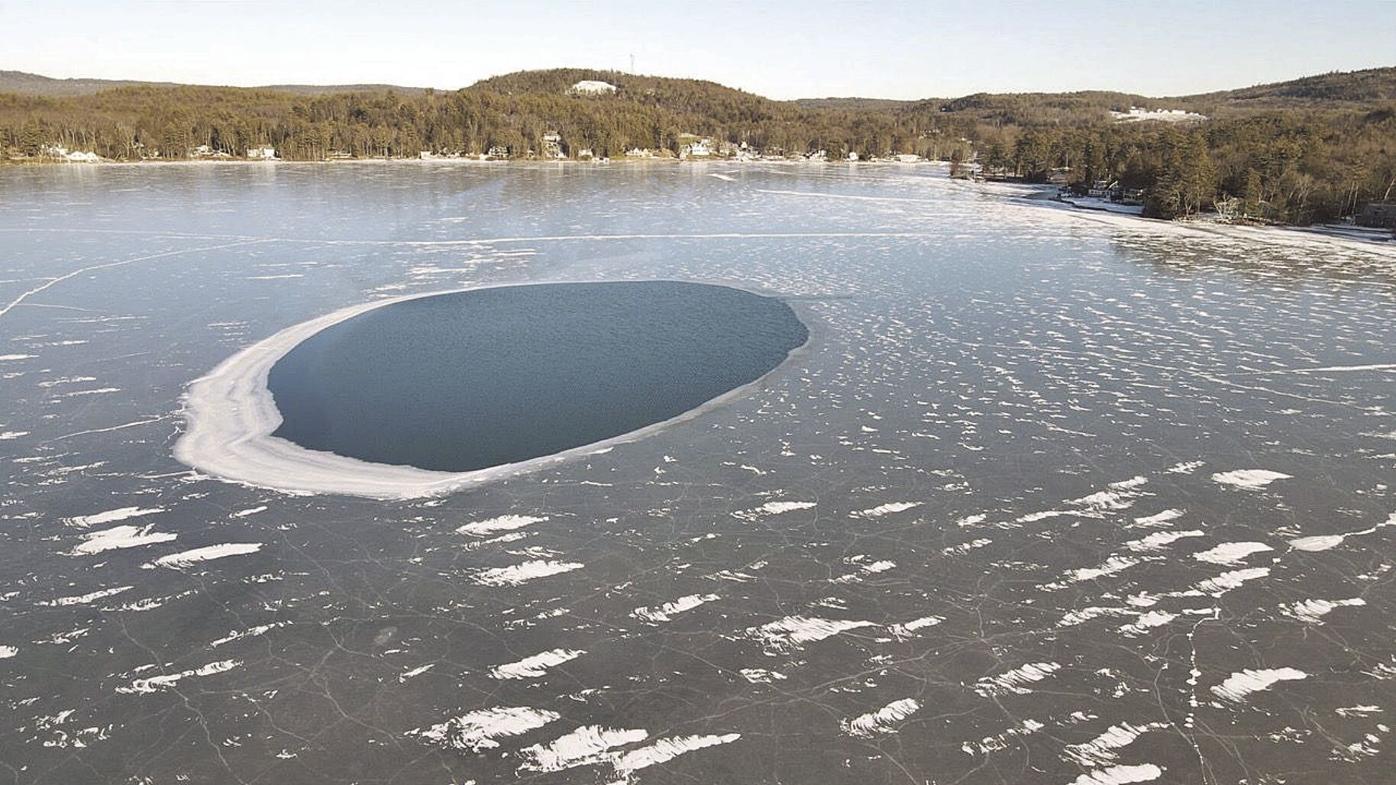 Spofford Lake is almost totally frozen over, as shown in this photo taken Monday.

The hole in the ice at Spofford Lake as viewed from Pinnacle Springs on Jan. 23.

The ice hole on Spofford Lake is located near where the lines intersect near the middle of the lake.

Spofford Lake is almost totally frozen over, as shown in this photo taken Monday.

CHESTERFIELD, N.H. — The first ever “ice out” lottery on Spofford Lake is raising money for both the Spofford Lake Association and the Chesterfield Historical Society.

“This is just a contest to have some fun and keep the Lake Association and the Historical Society in the top of the mind when everything is closed up for the weather and for pandemic reasons,” said Bayard Tracy, president the board of directors of the SLA.

Lottery tickets are $10 each and predictions are being taken on the SLA’s website at spoffordlakeassociation.org/ICE-OUT-LOTTERY-PAGE.

The deadline for entries is Feb. 15 and if there is more than one entry for the winning date, a single winner will be selected by a random drawing conducted by a special committee, which will also make the determination of the official ice out day.

“It’s not scientific, but ice out is the day you can cross the lake without encountering any ice,” said Tracy, who noted members of the committee will not be able to enter the contest.

To be exact, states the SLA’s website, “Consistent with previous precedent for state reporting, this will be the first date on which there is no visible ice anywhere on the lake surface, at 2:00 o’clock in the afternoon.”

But by noon on Tuesday, the lake wasn’t totally frozen over. Tracy said there is a hole in the ice where one hasn’t been seen before. Tracy said a hole in the mostly frozen lake surface was visible late into the winter last year as well, but that has not historically been the case.

Pam Walton, who was the SLA’s treasurer and secretary for about six years, said the hole is slightly north of the center of the lake, near a spot that is about 60 feet deep.

“I can’t find anyone who’s ever noticed an ice hole on the lake prior to last year,” said Walton. “Today [Jan. 25] the temperature is 10 degrees and the hole remains open water.”

According to information from the N.H. Department of Environmental Services, when deeper, warmer water moves toward the surface it can prevent freezing, creating areas of open water.

Other factors include turbulent currents, methane bubbles from decomposing organic materials, and warm groundwater bubbling up from an aquifer.

Tracy said it’s uncertain what has caused the ice hole these past two years, but noted there have been changes to the lake over the years and there was a cyanobacteria bloom last year. The bloom was linked to a type of cyanobacteria that grows at the bottom of lakes. Certain conditions can cause the algae to detach from the bottom and float to the surface and decaying algae can also produce methane.

According to the director of the state’s beach program and harmful algal and cyanobacterial bloom program, the cyanobacteria that showed up on the surface of the lake might have been growing on the bottom for many years and some sort of disturbance detached it to rise to the surface.

Tracy said Spofford Lake is predominantly spring fed, with some inflow from winter runoff and rain storms. The lake also has a remarkably low flushing rate of .2 percent, he said.

“Every drop of water that goes into the lake takes five years to leave the lake,” said Tracy. “If you have a very low flushing rate, sediment coming into the lake is not going to be moved out. It will stay there. The same thing is true for pollutants. There is no natural process to flush it out.”

Most of the water loss at Lake Spofford is due to surface evaporation. Some of the water flows out of the lake’s spillway, at its eastern edge, into Partridge Brook.

“In the deep basin of Spofford Lake, concentrations of [iron, manganese, and molybdenum] progressively increase above background levels starting shortly after settlement in A.D. 1660, after A.D. 1775 and 1830, after A.D. 1925 and more sharply after A.D. 1955, with the highest rate of increase after A.D. 1985,” states the final report. “At each of these inflection points, Spofford Lake’s bottom waters would have become less oxygenated over longer intervals. Many of these transitions are coincident with significant climate and land use changes and watershed development.”

“More sediment at the lake bottom has occurred since 1980 than in any 40-year period over the past 300 years,” he said. “I can’t draw a straight line, but I can tell you the lake is filling in and we know that development creates runoff into the lake.”

That increased sediment, piling up on the bottom of the lake, might also be contributing to the ice hole in the lake, he said. The water from the springs that feed Spofford Lake might be bubbling up somewhere other than in the past.

The report notes that in the last 40 years, the nature of the sediment has changed from mostly sand to organic material washed away from the shore of the lake by increased water levels. Turbulence and waves created by boats and small personal watercraft also contribute to shoreline erosion, states the report. In response, two years ago, the Board of Selectmen agreed to lower the level of the lake by adjusting the boards at the spillway at Partridge Brook.

The increase in runoff from the basin that surrounds the lake and the type of materials being washed into the lake at the shore have contributed to low oxygen levels in the lake.

Part of the reason for the “Ice Out” lottery is to also draw attention to the lake’s condition, said Tracy.

“The hole in the ice has come up completely at random, but it does point to the changes at the lake,” he said.