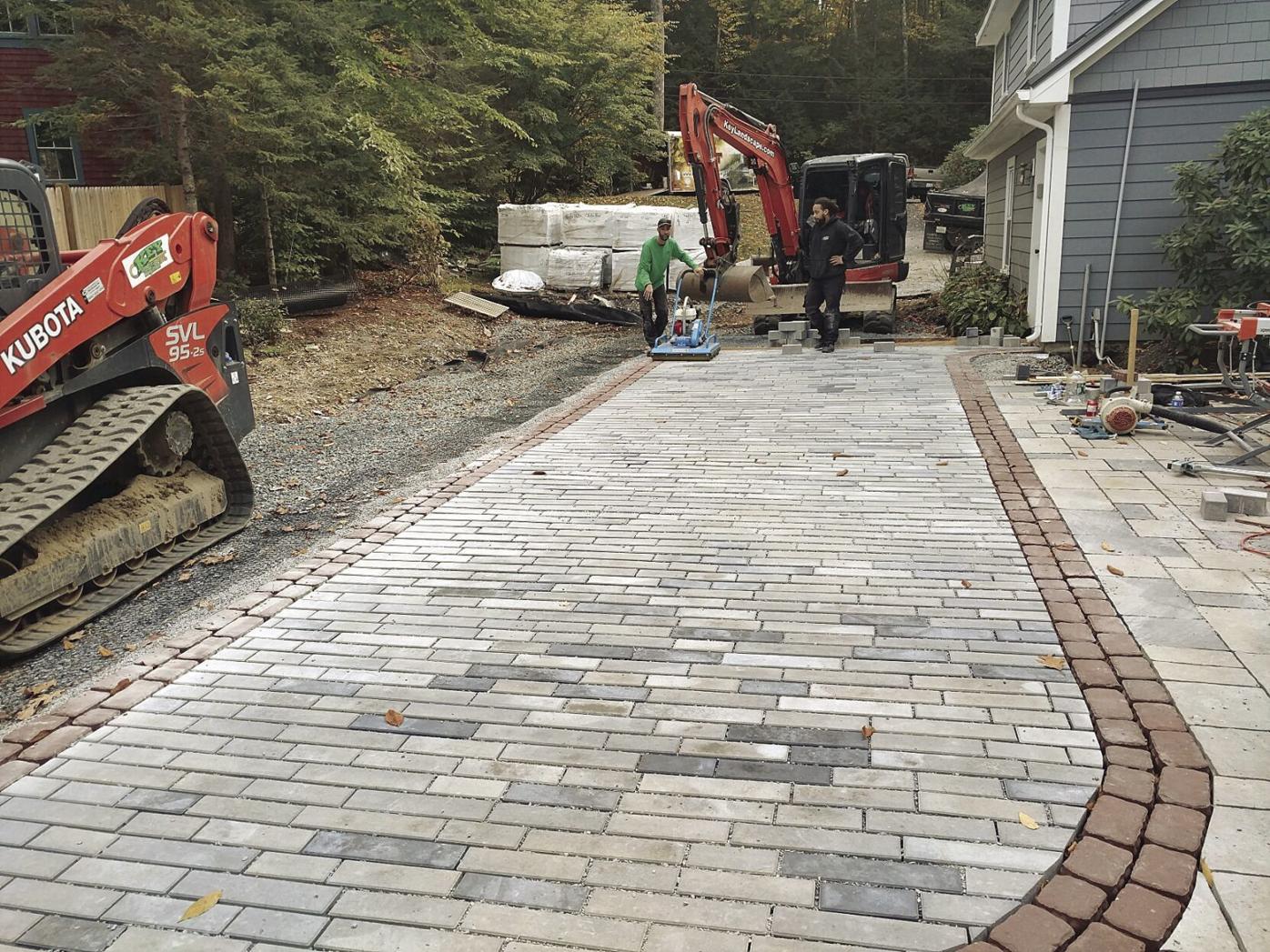 Workers with Key Landscape and Irrigation work on a new driveway at a home on Spofford Lake in Chesterfield, N.H. 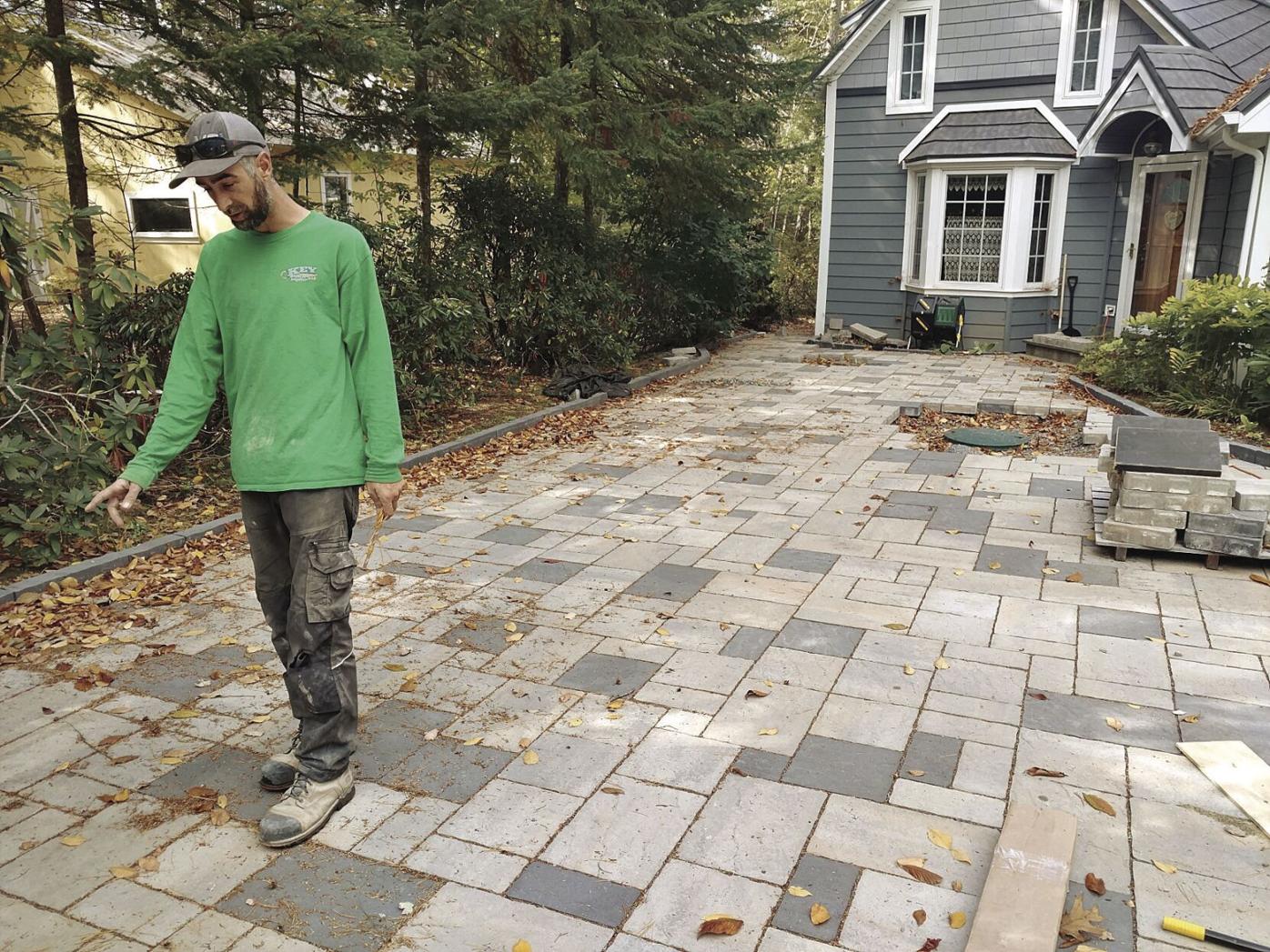 Zach Key, of Key Landscape and Irrigation, points out features of a permeable paver system installed at a home on Spofford Lake in Chesterfield, N.H.

Workers with Key Landscape and Irrigation work on a new driveway at a home on Spofford Lake in Chesterfield, N.H.

Zach Key, of Key Landscape and Irrigation, points out features of a permeable paver system installed at a home on Spofford Lake in Chesterfield, N.H.

Editor's Note: This story was edited at 11:10 a.m. on Oct. 13 to correct a mistake related to lot coverage.

CHESTERFIELD, N.H. — A disagreement over how a town zoning ordinance is written means a Zoning Board decision is likely to end up in court.

Michael Bentley, a Keene attorney representing the owners of a property on Spofford Lake, said during the Board’s Thursday night meeting the zoning ordinance “clearly says” all uses of property on the lake “shall first be regulated by the Shoreland Protection Act and then permitted in compliance with the existing residential district ...”

“Our position is that the clear wording of the zoning ordinance, means that the town, by adopting these provisions, pre-empted or ceded its authority in the ‘first’ instance to the Department of Environmental Services,” said Bentley. “Regrettably, I’m not sure how this will all get resolved unless we come to an agreement tonight or some judge tells how it’s supposed to fit together.”

Bentley came to the board after he requested a hearing to appeal a decision by the Zoning Board on June 11 that affirmed a cease-and-desist order issued by Chesterfield’s zoning enforcement officer. His clients, Robert and Christine Sugarman, purchased 217 Route 9A in 2011. In April 2019, the Sugarmans received a permit from the DES to replace two walkways and a rotted wood deck with 504 square feet of permeable pavers. However, the Sugarmans did not apply to the town for a permit to do the work.

On Nov. 7, 2019, the code enforcement officer issued a notice of violation after a visit to the site when he learned another 1,567 square feet of pavers, this time without a permit form the state or the town. He notified the owners that they had to remove the additional pavers by Nov. 29, 2019, or face fines of up to $550 a day.

On Oct. 28, 2019, the Sugarmans submitted an “after the fact” permit for the additional pavers, which was approved by DES on Nov. 21, two weeks after the code enforcement officer issued the cease and desist order. However, again the Sugarmans did not receive approval from the town.

According to the zoning ordinance, in the Spofford Lake District, “Total impermeable coverage (including building coverage) shall not exceed twenty percent ... of the area of the lot.”

Bentley argued because the pavers were installed with DES approval, which does recognize pervious system such as that installed at 217 Route 9A, his clients have not increased coverage at their home.

“We believe that decision by DES is binding on the town and such the decision made by the code enforcement officer was in error,” he said.

Board member Richard Aldrich, who uttered an expletive that Bentley asked be entered into the record, said the Sugarmans did not follow the correct process because the state permit specifically states an applicant in the lake district has to also go before the town.

“They didn’t do what the DES permit required,” he said.

Board member John Zanotti agreed, saying the Shoreland Protection Act allows a municipality to apply more stringent standards than outlined in the act.

McKeon pointed out that the DES permit has a box that an applicant must check that states a DES permit does not exempt an applicant from having to follow other local, state or federal regulations.

She said an applicant doesn’t install that much additional coverage “by mistake.”

Bentley admitted the applicant had installed more than allowed by the original permit, but DES, after inspecting the work, issued the after-the-fact permit.

“In the state’s eyes, we were then in compliance with the DES regulation,” he said, adding the zoning ordinance doesn’t detail what to do when there is a conflict between regulations.

“When you obtained the permit for the shoreland it did not exempt the applicant from meeting any other ... approvals,” said McKeon, “and they didn’t even try to get any.”

“They had to apply to us for a permit that we couldn’t issue because of our codes,” asserted Aldrich. “It’s really simple. It just seems to me that somebody is trying to cloud the whole issue with this ‘first’ ... it just doesn’t make any sense to me.”

McKeon asked if the Sugarmans had talked with the town’s building inspector before proceeding with their project. Bentley said he has nothing in his files that indicate they approached the town during the permitting process.

McKeon also noted that the Sugarmans are replacing a paved driveway with pavers, and they don’t need to apply to the town for a permit for that work as long as it doesn’t exceed the size of the original driveway.

Steve Key, the owner of Key Landscape and Irrigation, told the Reformer on Oct. 6 that the town’s zoning ordinance is too vague and this could be an opportunity for Chesterfield to rewrite it to be clearer.

“Especially being a town that has a lake that is as nice as Spofford Lake,” he said. “The benefits will help keep the lake clean and cut way down on stormwater runoff. These paver can handle from 500 to 900 inches of rain an hour and that doesn’t happen anywhere on Earth.”

The Board voted 5-to-0 to uphold its original decision.