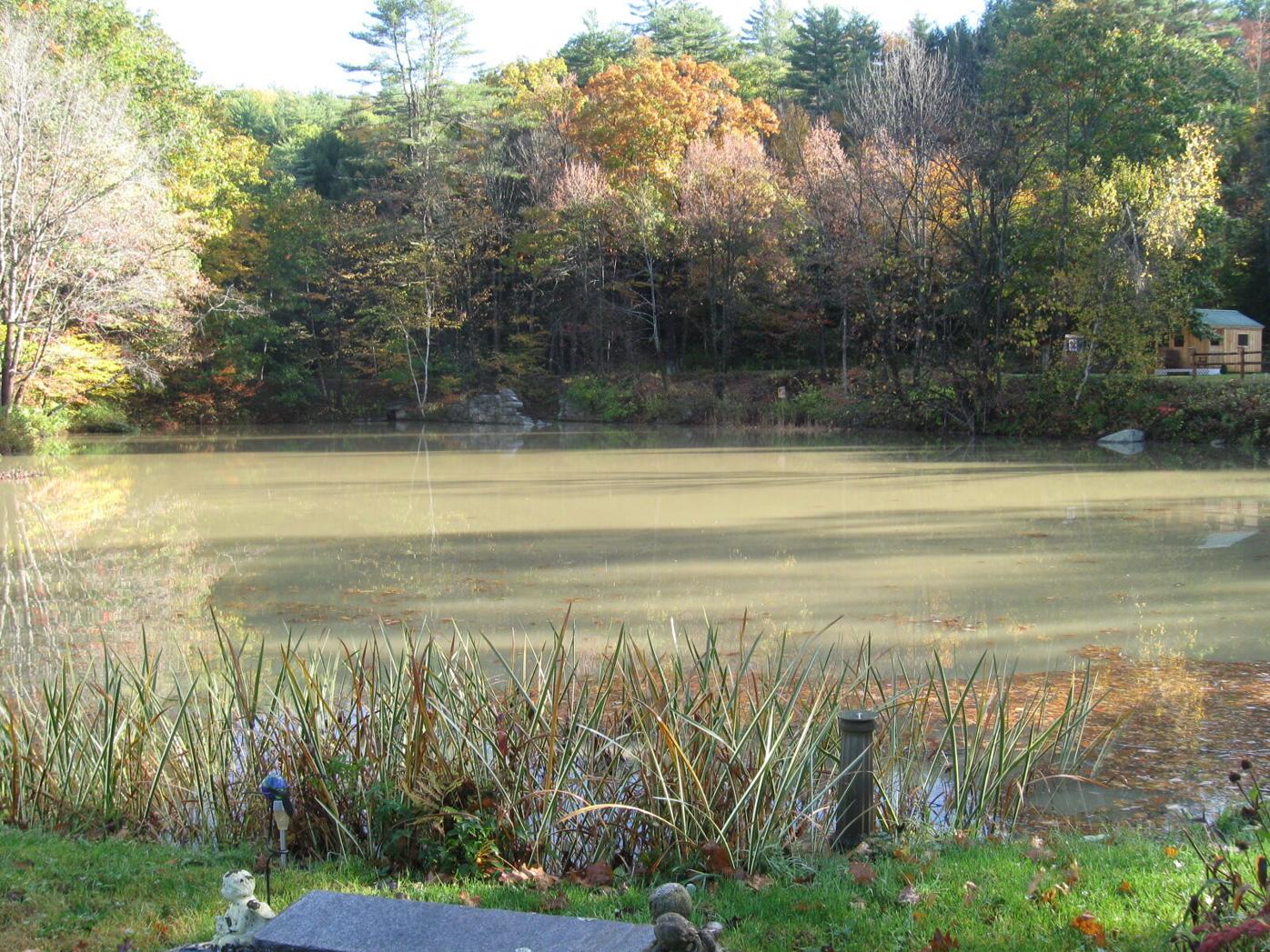 A photograph taken last week shows one of the privately-owned Bartonsville mill ponds with a strange milky color, the result, according to an Agency of Natural Resources officer, of "clay in suspension" in the brooks. 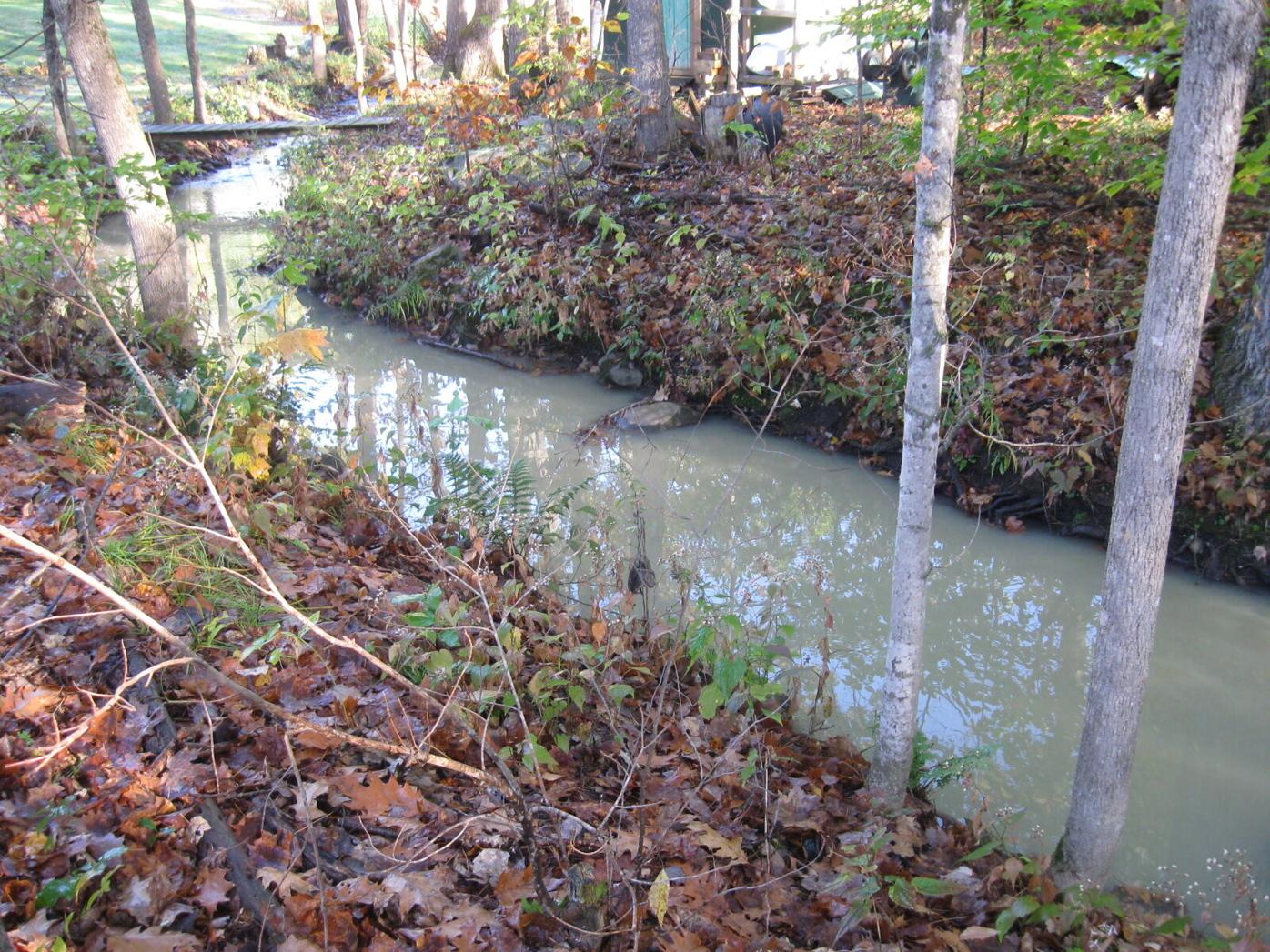 One of the brooks from Bartonsville Pond is running a strange milky color through the woods.

A photograph taken last week shows one of the privately-owned Bartonsville mill ponds with a strange milky color, the result, according to an Agency of Natural Resources officer, of "clay in suspension" in the brooks.

One of the brooks from Bartonsville Pond is running a strange milky color through the woods.

LOWER BARTONSVILLE — The Agency of Natural Resources has issued a notice of alleged violation to an out-of-state landowner and his local excavating firm for building a pond and polluting state waters without the necessary permits.

Sean McVeigh, the chief of enforcement, said that Brian Desrosiers of Essex, Mass., as well as Peloquin Construction LLC, a Rockingham construction firm, were served with a notice of violation last month, and ordered to take immediate steps to stop the pollution.

But while a Ludlow engineering firm has been brought in to try to address the environmental problems, the run-off is continuing, Bartonsville residents said, and winter is getting closer.

Photographs taken recently show one of the privately-owned Bartonsville mill ponds a strange milky color. McVeigh said he believed the milky color was a result of “clay in suspension” in the brooks, which drain into at least two private ponds, eventually emptying into the Williams River.

The problem was first brought to the attention of the Rockingham Select Board about three weeks ago by local resident Susan Brace. She said she knew enforcement of environmental regulations rested with the state, and not the select board, but she said she felt they should be aware of it.

The problem, according to McVeigh and emails from Desrosiers’ engineer, is that an attempt to build a pond was undertaken on steep slopes, late in the year, and on some of the “worst soils” for such a project.

Paul Hendrickson is one of the Lower Bartonsville landowners most affected by the polluted runoff, since he owns the mill ponds. “The issue is getting out of hand,” he said last week.

Hendrickson said he is disappointed with both the state and Desrosiers’ actions since the problem is continuing, if not getting worse on some days.

Desrosiers, an attorney from Essex, Mass., said he is working to resolve the issues.

“We hired the state recommended engineer for our pond/home site project. The engineer has been working hand and hand with the state of Vermont.” he wrote in an email.

“Whatever concerns, suggestions and questions the state has had have been addressed by the contractor as directed by the engineer. The state is aware of the work being done and wants to see the project completed and stabilized for winter,” he said.

The Desrosiers project is located on Petty Road, a steep dirt road off Eldredge Road. According to Hendrickson, Desrosiers has owned the land for several years, but there is no home there.

McVeigh, the chief enforcement officer, said the state is continuing to monitor the situation to make sure corrective action is taken. Desrosiers has applied for a state stormwater permit, as well as a discharge permit.

“While this is an ongoing investigation, I can tell you that we are doing what can be done to facilitate the abatement of the ongoing issues at the subject site. Unfortunately, this is not a simple problem to correct and it will likely take more time than anybody wants it to for the site to fully stabilize. There is no tap to turn off here,” McVeigh wrote in an email.

He said that Tim McNamara, one of the state’s environmental enforcement officers, has been on site and in contact with the Desrosiers and Peloquin “numerous times.”

He said Desrosiers and Peloquin “have largely complied with the Notice of Alleged Violation issued to them and with further directives from (McNamara) and Department of Environmental Conservation staff, but their initial failure to obtain the required stormwater permit and to implement adequate erosion control measures at the start of the project and to improve/expand them as necessary, combined with the extensive areas of open earth, steep slopes, extremely fine and erodible soils, and lateness in the growing season has unfortunately resulted in discharges,” he added.

“Until the site is stable and the discharges cease, we will continue to monitor the situation and request adjustments be made at the site, but again due to many factors this is not a quick fix situation.

According to Hendrickson and Brace, once the problem started, Desrosier posted his land so residents couldn’t check on the status of the pond making or the cleanup, but he said the discharges have continued.

But a series of photos that Hendrickson took this week showed a small stream, running a strange milky color, through the woods, and small fabric buffer dams collapsed in the stream.

He said another neighbor, Reed Duncan, has a smaller pond behind his home, and that is polluted too by the silt and sediment.

Susan Hammond, a member of the Rockingham Select Board and a neighbor to the project, said the problems are continuing, even with corrective work by Desrosiers.

”Before Ed came on there was no engineer plan. And it shows; the pond is leaking so we are getting more silt this week even without it raining,” Hammond said.

Hendrickson said the neighbors downstream are worried about the stability of the dam, and whether, with the increasing rainstorms and winter runoff, it would hold.

McVeigh said the state could not remedy the effects of the Desrosiers pollution on private property, and he said the landowners can take the Desrosiers to court to have their property repaired.

“The neighbors are free to pursue a civil case of their own. The state does not order remedial actions on private property not owned by the respondent,” McVeigh said.