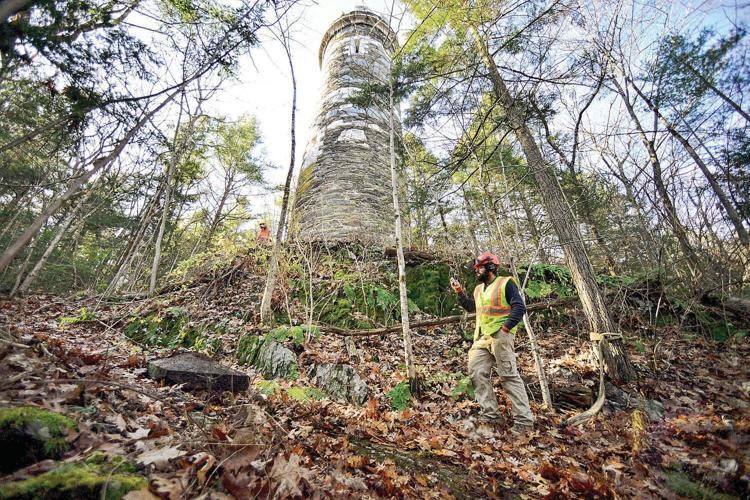 In this present-day photo, Brian Post operates a winch, which is dragging a concrete cap 150 feet up a slope to the base of the Retreat Tower. 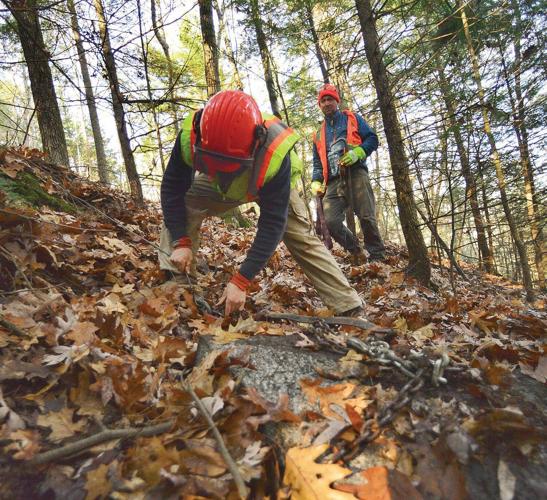 Brian Post puts a chain around a concrete cap before it can be dragged 150 feet back up to the base of the Retreat Tower on Thursday, Nov. 21, 2019. 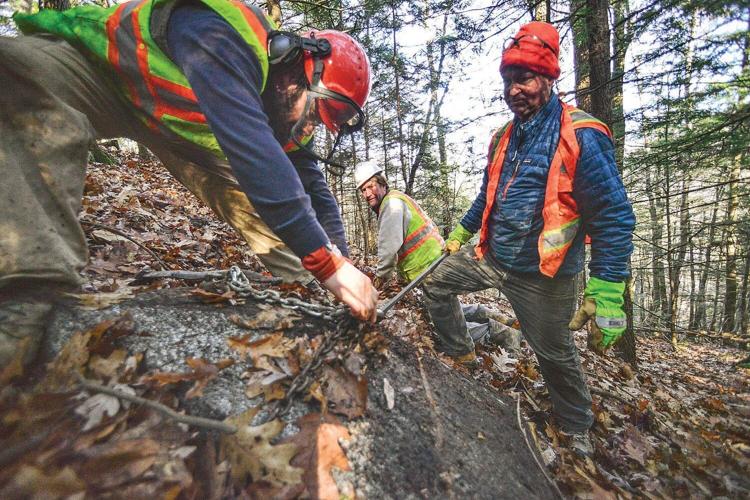 Brian Post puts a chain around a concrete cap. 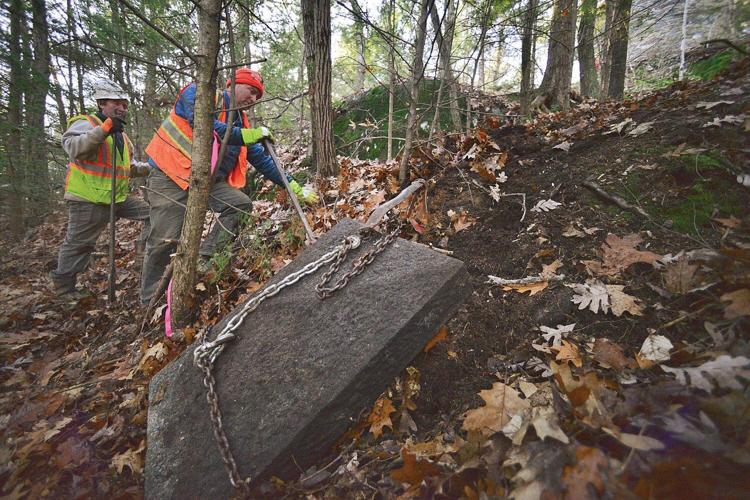 Jared Flynn helps free a concrete cap that got hung up on a rock as it was being dragged up a 150-foot slope to the base of the Retreat Tower on Thursday, Nov. 21, 2019.

In this present-day photo, Brian Post operates a winch, which is dragging a concrete cap 150 feet up a slope to the base of the Retreat Tower.

Brian Post puts a chain around a concrete cap before it can be dragged 150 feet back up to the base of the Retreat Tower on Thursday, Nov. 21, 2019.

Brian Post puts a chain around a concrete cap.

Jared Flynn helps free a concrete cap that got hung up on a rock as it was being dragged up a 150-foot slope to the base of the Retreat Tower on Thursday, Nov. 21, 2019.

BRATTLEBORO — The Retreat Tower, from the top of which an observer can get sweeping views of Brattleboro, the Connecticut River, Wantastiquet Mountain and the Retreat Meadows, was built between the years of 1887 and 1894.

This was 50 years after the Vermont Asylum for the Insane was founded with a $10,000 bequest from Anna Hunt Marsh, who was born in nearby Hinsdale, N.H., in 1769. Now known as the Brattleboro Retreat, doctors at the facility believed labor was conducive to restoring mental health and thus, they and patients built the 65-foot-high cylindrical Gothic tower, as a testament to 50 years of care provided by the asylum.

"It was quite a remarkable feat," said Jared Flynn, a member of the Friends of the Brattleboro Retreat Tower, an informal group of mostly stone workers that pitches in to maintain the structure.

The Retreat Tower was the brainchild of Dr. Joseph Draper, an enthusiastic advocate for outdoor recreation who served as the Brattleboro Retreat's superintendent from 1873 until his death in 1892, one year before the Tower was finished.

According to information prepared by Stephen Sanders in 1973 for the Retreat's application for historic designation, the Tower has a brick core, faced with uncoursed ashlar, or stones laid in irregular horizontal layers, and rubble stone.

"All of the materials are locally sourced," said Flynn.

Ledge materials were harvested from below where the Tower now stands and granite came from the Retreat Quarry on West Dummerston Road.

The T ower was capped with granite quoins, or masonry blocks, weighing up to 500 pounds, quarried from J.E. Lyons on Black Mountain Road.

Sometime during the 1980s though, said Flynn, vandals somehow managed to dislodge the quoins and flip them to the ground. Some of the quoins landed on uphill side of the Tower and remained there for going on 40 years, while others tumbled down the steep bank on the east side of the structure.

For the past few months, Flynn, with the help of Rosinski Masonry in Brattleboro, has been scouting the locations of the quoins and devising a method of retrieving them.

What happened to the 10th is unknown, but Flynn couldn't imagine someone dragging off a stone that large.

Getting the quoins up the hill proved to be quite a conundrum, until they spoke with Brian Post, a dry stone wall master craftsmen and former executive director of The Stone Trust, which is located at the Scott Farm in Dummerston. Post told them about a machine his father, the late Irwin Post of Chester, a woodworker and forester, had built in the 1980s called a radio-controlled logging winch.

"He designed it for low-impact logging in hard-to-access places," said Brian Post.

The winch is built on top of a sled that holds 1,200 feet of cable. To move the sled through the forest, the operator unspools the cable and ties it to a tree, engaging the winch, which winds the cable back on the spool, dragging the sled as it goes.

"You can position this on one side of your wood lot and fell and skid everything out without any impact from logging," said Post.

He thought the winch might be the perfect tool for getting the quoins back up the slope.

So on Thursday, Post, Flynn, Torben Larsen, another stone worker, and Dan Healey, a forester who lives in Brattleboro, arrived at the Tower with the winch, chains, webbing and prybars.

"With a log, you can just latch on to it with a grapple and just pull," said Post. "But with the rock, we had to be a little creative and wrap it with a chain."

Because it wasn't a straight pull up the slope, Healey had to rig webbing to allow the tow cable to zigzag up the hill.

"This is not something I do every day," said Healey. "But we made sure we brought all kinds of webbing, blocks and chains so that we could monkey around with all these different directions we have to pull in."

Healey said he was "totally down" with helping the Friends when Post asked if he could lend a hand.

"I used to live at the bottom of the hill," he said. "It's kind of my backyard."

Flynn said that the Friends has no official connection to the Retreat, but does receive assistance from John Sohl, facilities manager.

"It's nice to give back and use our skills in the community, especially for the hospital," he said.

Konstantin von Krusenstiern, the Retreat's vice president of development and communications, said the Retreat Tower was closed many years ago because of ongoing vandalism and because the old stairs were deemed unsafe and didn't meet code.

"We are delighted by this volunteer effort to preserve the Retreat's historic architecture and ensure the Tower continues to stand as a beacon for all to enjoy," said von Krusenstiern. "It's a significant undertaking that symbolizes both a connection to our past and an ongoing spirit of community pride."

The Friends of the Brattleboro Retreat Tower can be found on Facebook. To see a video of the radio-controlled logging winch, visit the Reformer's Facebook page.