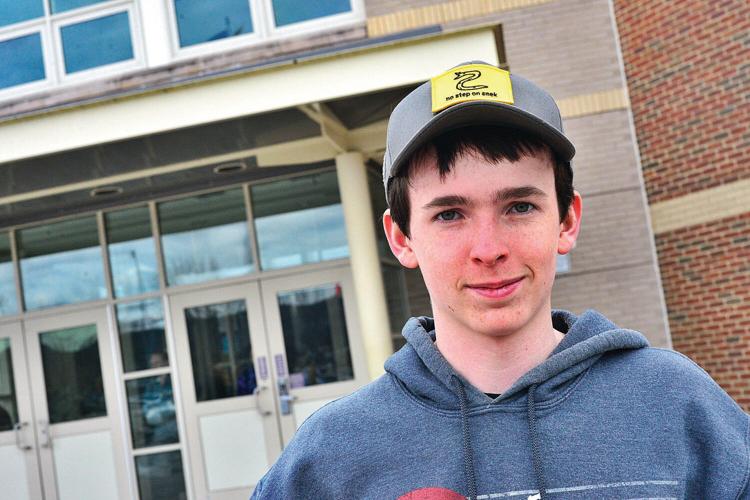 Thomas Drummey, a junior at Brattleboro Union High School, stands in front of the school on Friday, as he and roughly 30 of his fellow students came together to support the second amendment and patriotism. 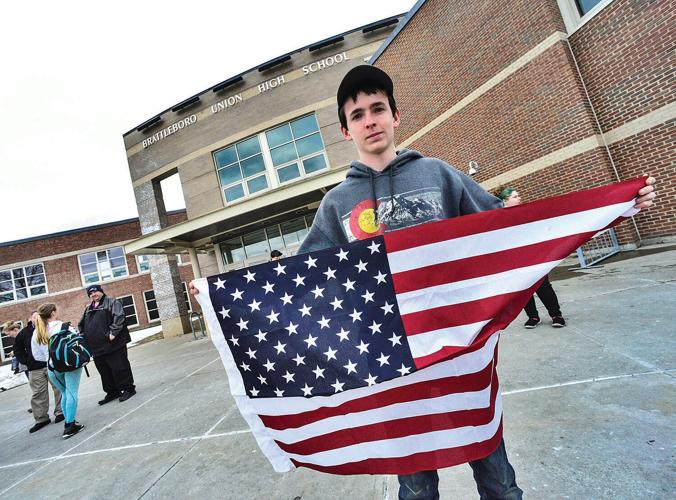 Thomas Drummey, a junior at Brattleboro Union High School, holds an American Flag in front of the school on Friday, as he and roughly 30 of his fellow students stood together to support the second amendment and patriotism.

Thomas Drummey, a junior at Brattleboro Union High School, stands in front of the school on Friday, as he and roughly 30 of his fellow students came together to support the second amendment and patriotism.

Thomas Drummey, a junior at Brattleboro Union High School, holds an American Flag in front of the school on Friday, as he and roughly 30 of his fellow students stood together to support the second amendment and patriotism.

BRATTLEBORO — Students at Brattleboro Union High School staged a rally in favor of second amendment rights outside the school on Friday morning, saying their goal was to show there is support for gun rights among the student body.

Junior Thomas Drummey said the rally was to show general support and pride for the United States and the second amendment.

The rally had roughly 30 students, parents and community members in attendance.

"It wasn't to get people upset but to get our voices heard," Drummey said. "It was a demonstration of patriotism."

BUHS has a reputation for being largely liberal and largely anti-gun, Drummey said. He and other students wanted to showcase the differing opinions at the school. At the rally itself, Drummey said, there were diverse opinions. Most people, he said, see gun supporters as being hateful and uneducated. He believes that most of the people at the rally are respectful to different groups such as LGBTQ people. He also added that the majority of students at the rally were Sen. Bernie Sanders supporters, though some did support President Donald Trump.

The students also made sure to hold the rally outside of class time, before school, because they wanted to minimize disruption.

"People didn't have to engage with us if they didn't want to," said Ryan Struthers, a senior who helped coordinate the rally with Drummey.

Adults who observed the rally agreed that it was tastefully done.

"It was peaceful, calm and kids were respectful of each other," Brattleboro Police Capt. Mark Carignan wrote in a text message to the Reformer.

The superintendent of Windham Southeast Supervisory Union, Lyle Holiday, was also in attendance.

"[The students were] all very respectful and peaceful. Students were holding 'Don't Tread On Me' flags and an American flag," she wrote in an email to the Reformer.

Drummey also emphasized that the rally wasn't a counter-protest to the National School Walkout Day on March 14. Friday's rally, he said, had been in the works for about a month.

Both Drummey and Struthers said they're able to talk to their peers who have opposing beliefs. Drummey said he's even bringing a friend who participated in the March 14 walkout to a gun shop because she discovered that she didn't really know about the parts of guns she was fighting to regulate.

But despite students' best efforts, hostility still exists. Both Drummey and Struthers said they've been yelled at for trying to discuss their opinions about guns.

"It's definitely stigmatized," Drummey said. He thinks many students may be afraid to voice their opinions about the second amendment.

Both also say that gun violence is a problem that needs to be addressed.

Struthers believes the conversations surrounding school shootings are centered too much on objects rather than people.

"People don't want to believe it's a people issue," he said. To him, bullying is a big factor in gun violence. "Everyone needs someone to talk to," he said.

While guidance counselors and teachers help, he said, it's not the same as being able to rely on your peers. He also believes there needs to be more money and support put towards mental health across the board. From watching the news, he's gathered that most shooters tend to be people with a poor quality of life.

"You feel so hurt personally that you want payback," he said.

Drummey disagrees that bullying is the issue. When his father was in high school, he said, students would bring rifles to school. Bullying existed in the past, maybe even worse than it does today, but school shootings weren't as common, he said. Drummey isn't quite sure what the cause of increased shootings is. He thinks the media bears some responsibility for sensationalist coverage of mass shootings and their perpetrators.

Both Drummey and Struthers are in favor of increased background checks and keeping guns out of the hands of people with a potential for violence or history of violence. But no matter what, both said, it's not possible to completely do away with guns.

"We've had guns in all of U.S. history," Struthers said. "People are going to find a way to get them."

Drummey used heroin as an example. "Heroin's illegal but people still find a way to get that," he said.

Though neither Struther or Drummey is old enough to own a gun, they said that they support them for hunting, sport and protection. Both think that guns in the hands of law-abiding citizens would deter violence.