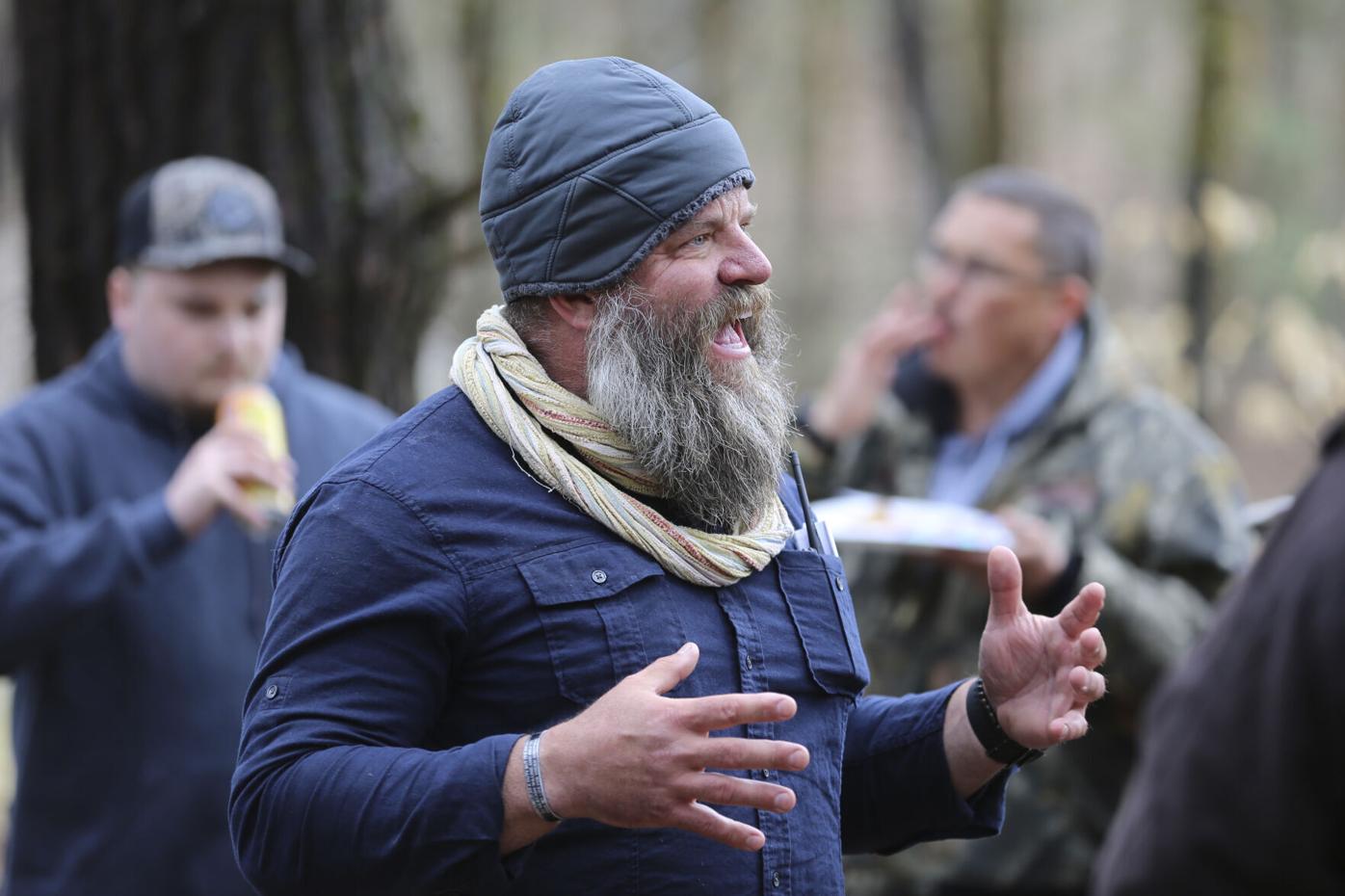 Daniel Banyai, the owner of Slate Ridge, speaks to supporters on April 17, 2021, in West Pawlet during a Second Amendment Day Picnic at the unpermitted gun range and firearms training center. The Vermont Supreme Court has upheld a lower court's verdict against Daniel Banyai of West Pawlet in a decision made public Friday. 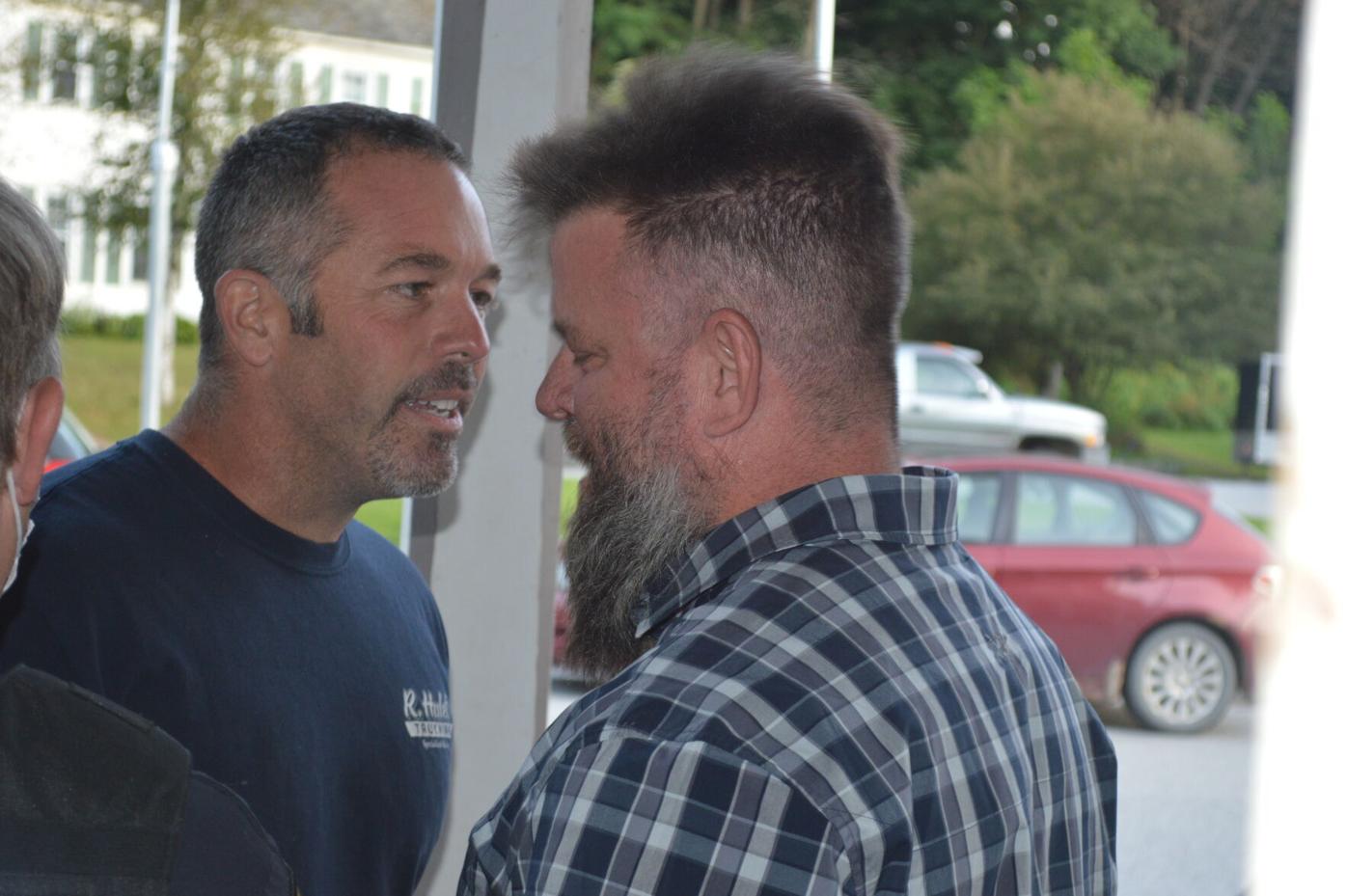 Rich Hulett, left, speaks to Daniel Banyai in front of the Pawlet Town Hall after Banyai's tax hearing in late August. Hulett's wife and daughter have an order of protection against Banyai for their home and property, as they were subjected to a campaign of intimidation and threats by Banyai. On Friday, the Supreme Court upheld another lower court's verdict against Banyai.

Daniel Banyai, the owner of Slate Ridge, speaks to supporters on April 17, 2021, in West Pawlet during a Second Amendment Day Picnic at the unpermitted gun range and firearms training center. The Vermont Supreme Court has upheld a lower court's verdict against Daniel Banyai of West Pawlet in a decision made public Friday.

Rich Hulett, left, speaks to Daniel Banyai in front of the Pawlet Town Hall after Banyai's tax hearing in late August. Hulett's wife and daughter have an order of protection against Banyai for their home and property, as they were subjected to a campaign of intimidation and threats by Banyai. On Friday, the Supreme Court upheld another lower court's verdict against Banyai.

WEST PAWLET — The Vermont Supreme Court has upheld a lower court’s verdict against Daniel Banyai of West Pawlet in a decision made public Friday.

The Supreme Court affirmed the decision issued by the Environmental Division of the Superior Court earlier this year, upholding the $46,600 in fines issued to Banyai for 466 days of noncompliance at $100 per day.

Banyai had argued the fines were not justified because he claimed he had a valid permit; the court had allowed some evidence to be admitted improperly during a merits hearing; and that the fines were excessive.

The justices denied all of these claims, saying the lower court did not abuse its discretion in assessing the fine and made appropriate decisions on the other matters.

The long-simmering dispute in West Pawlet began when Banyai began building a tactical shooting training facility on his 30 acres at 541 Briar Hill Road without first obtaining the appropriate permits from the town.

According to court documents, Banyai began operating Slate Ridge, the name he gave the property, in 2017.

He later told the courts under oath that he didn’t charge for any of the classes and it was not a business, and therefore should not be regulated as one.

He also had feuds with neighbors, regularly posting vile comments about them on social media and forcing at least one neighbor to obtain a protective order against him.

The only valid building permit Banyai has for the property is for a garage with an apartment over it. In addition to that structure, YouTube videos have shown the property to include two shooting ranges with related structures and developments for tactical training.

“I’m super happy we were able to be heard,” said Beth Duquette. “It wasn’t a gun issue; it was a bylaw issue. We’re just super relieved.”

Her husband said enforcement will now be the issue.

“Hopefully, somebody will enforce these laws,” Ray Duquette said. “Up to now, everybody’s been afraid of the guy. Maybe now they’ll pay attention.”

The Supreme Court justices didn’t agree with the arguments Banyai’s attorney, Cindy Hill of Middlebury, made during oral arguments.

The trial court had accepted the town’s argument, and the Supreme Court agreed.

The judges also denied Banyai’s claim that evidence was admitted inappropriately during various stages of the trial. The justices said it was Banyai, himself, who caused most of the issues while serving as his own attorney.

The court identified seven exhibits the town attempted to submit into the record during a merits hearing, only four of which are of interest to the decision. One was a newspaper article published with statement’s Banyai made during an interview, two Facebook posts made on the Slate Ridge page controlled by Banyai, and an unofficial transcript of another hearing in which Banyai was accused of stalking a neighbor.

Three of the four exhibits were admitted by the trial court judge after Banyai refused to answer questions under cross-examination. The fourth item was admitted after he was found in contempt, and the sanctions included admission of the documents, including one in which Banyai had admitted he owned and controlled the Facebook page and was responsible for the posts.

Hill argued the trial court lacked authority to admit otherwise inadmissible evidence as a sanction. The court ruled that the fourth item might have been admitted in error, but the error was harmless, because it was redundant to live testimony given by a witness.

The final issue the court decided was the fines.

Banyai was fined $100 per day for 466 days he was in violation, which Banyai argued was excessive.

The justices pointed out that state law allows for fines of up to $200 per day with each new day counting as a new violation, but the court must balance any continuing violation against the cost of compliance.

“We determine that the Environmental Division did not abuse its discretion when it fined landowner $46,600 for the violations,” the justices wrote.

The justices wrote that Banyai’s failure to disclose specifics of his shooting facility in the form of a permit application “prevented the town from assessing potential risks to neighbors and the environment.”

Specifically, the court said, “the unpermitted shooting range could interfere with neighbors’ use and enjoyment of their property, and bullets and shells could damage the environment.”

Also, the justices wrote there was no credible evidence of any mitigating factors, because the landowner refused throughout the proceedings to comply with the bylaws and delayed the town’s ability to enforce the bylaws.

The justices also pointed out that Banyai knew, or should have known, that his 2018 permit was not valid for the uses of his property.

“The landowner had history of noncompliance with the bylaws, despite warnings from town officials, [and] a significant daily fine was required to deter landowner from future violations based on landowner’s previous investments in improvements and stated intent to make further improvements on the property,” the justices wrote.

The court concluded by adding that the decisions by the Environmental Court are “final and binding … and landowner is precluded from challenging any of the violations contained in it.”

The decision, written by Associate Justice Harold Eaton Jr., was affirmed by four of the five justices on the court, with Justice Beth Robinson participating in arguments but not the decision.

Meanwhile, back in West Pawlet

Banyai has said on social media in recent months that he was beginning work on a third long-distance range, as well as a “bunkhouse.” In a Slate Ridge post on Twitter, Banyai says, “The foundation for the second drom [sic] which will comfortably house 12 to 16 is completed,” the post read.

That was followed by a video showing a delivery of wood, and neighbors have reported what they said sounds like construction coming from the property.