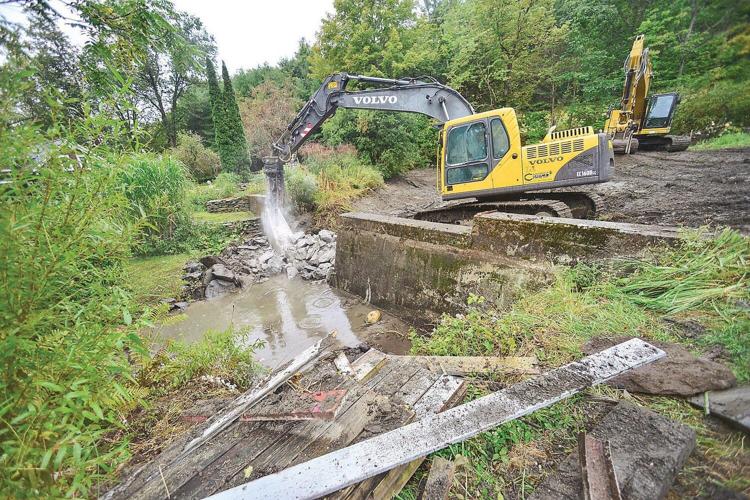 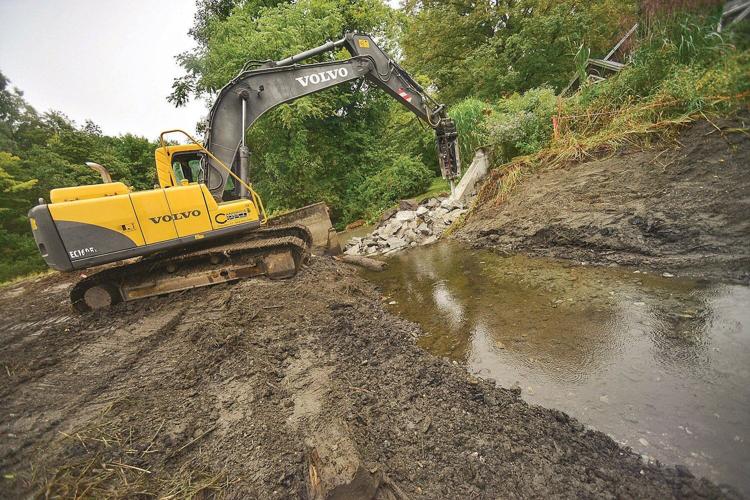 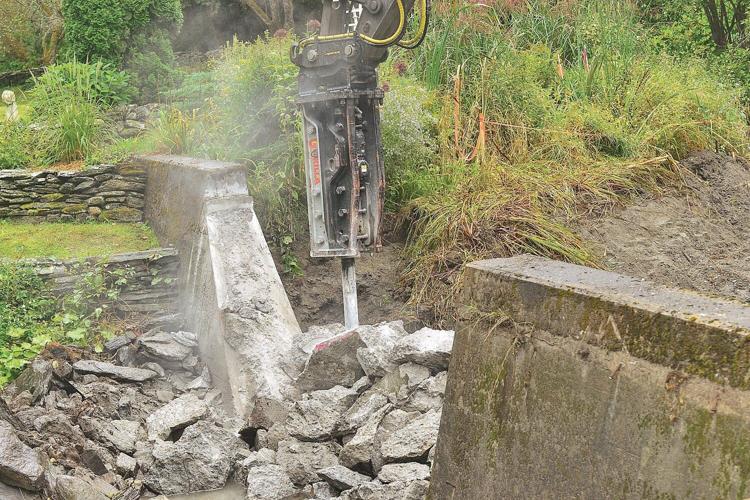 DUMMERSTON — A 1940s-era dam that was built to create a swimming pond has been torn down by the Connecticut River Conservancy.

The dam was on Crosby Brook, which originates in the hills of Dummerston, at about 1,000 feet. It flows 6 miles directly into the Connecticut River just below the U.S. Navy Seabees Bridge that connects Brattleboro to Chesterfield, N.H. Crosby Brook follows Middle Road toward Brattleboro, where it joins with the southern branch of Crosby Book, which itself follows Black Mountain Road, flowing under Interstate 91 and then into the river.

According to the Dummerston Conservation Committee, Crosby Brook has also been referred to as Black Mountain Brook and Sergeant Brook.

Crosby Brook is one of a number of waterways in Vermont classified as impaired, which means stormwater doesn't naturally soak into the ground because of roofs and paved surfaces, and instead results in an increased flow of water that is often contaminated with pollutants.

"This one project is not going to take Crosby Brook off the impairment list," said Ron Rhodes, a river steward with the Connecticut River Conservancy. "But every little project helps."

The CRC, with the Windham Regional Commission, arranged the dam removal, including applying for grants from the state and federal government, about $55,000 in total.

While removing what is known as the Vaughn-Johnson Dam at the corner of Tucker Reed Road and Middle Road won't get the brook off the impaired list, the work still has multiple benefits, said Rhodes, including improving water quality and reducing the water temperature, making it more conducive for brook trout.

"And because we are removing the sediment that is trapped behind the dam, we're expanding the flood capacity so the next time we have another [Tropical Storm] Irene, there's a lot more room for the flood water to spread out, reducing damage to the culvert and the bridge that is downstream."

"Judging by 1951 and 1962 aerial images, the original impoundment was wider than today's and likely deeper," wrote Paula Sagerman, a historic preservation consultant. "Since then, it has been affected by erosion, silt build-up and the growth of brush and cattails."

The dam was built for George and Helen Vaughan and their family, who purchased a circa 1860 farmstead in 1940, she wrote.

According to Sagerman's report, Helen Vaughan died there in 1968, and in 1989, six years after George's death, the property was sold to Esther Kemp. She lived in Massachusetts and sold the property in 1996 to Cyril and Phyllis Meadow of New York City. They subdivided the parcel, and the present 36-acre parcel, with the residence and dam, was sold in 2009 to the present owners.

The Connecticut River Conservancy contracted with Canonica Farm & Forest Services, Derrig Excavating of Putney and Ripple Natural Resources to take down the dam.

"Ben [Canonica] is very careful and conscientious, and since we are in someone's backyard, we need to make it look right when we are done," said Rhodes.

In addition to knocking down the cement dam, sediment was removed from the former pond and given to the town of Dummerston, which hopes to use it for its own remediation work, said Rhodes.

Matthew Murawski, an engineer with Ripple Natural Resources, said that there were no unusual challenges in removing the Vaughn-Johnson Dam.

"On this particular project, like other ponds that are built for recreational projects, the pond above the dam was excavated so that people could have a nice deep swimming hole, but that means there's no natural channel material here," he said.

Gravel and cobble, rocks that range in size between softball and soccer balls, will be brought in.

"When you knock the dam down you can't just let the water go because you have material that may not be able to stay in place when the stream comes through," said Murawski. "We need to bring in material to build a natural channel. If we do our job well, what we build looks a lot like the natural channel downstream or upstream."

It's not just rocks that are added to the channel, he said. "If you look at the natural channel up or downstream, there is a lot of wood from a lot of fallen trees that are in the channel, so one thing we will do is incorporate some logs into this channel."

The Connecticut River Conservancy removes about three dams a year.

"There are a thousand of these dams out there," said Rhodes. "Next year we are working with Magic Mountain in Londonderry."

In 2017, the Conservancy removed a dam on a brook with no name near the intersection of East West Road and Green Mountain Camp Road. Like the dam on Tucker Reed Road, that dam was also installed to create a swimming hole.

"When we were doing the project on East West Road the property owner of this dam saw the article in the paper and they called us," said Rhodes. "We have 10 other projects around the state in process right now. I just had a landowner in Newfane call me and the state just sent me another one."

After the channel has been restored, the banks will be reseeded and native vegetation will be planted to stabilize the area, he said.

Because this dam was privately owned, said Rhodes, there was no need to go through a public hearing process, but in the past, it's not always been that easy.

"We did one in East Burke a few years ago that was 15 years in the making. It was very controversial. And now that it's gone, even those who were originally opposed to it see it and like it."

For more information about dam removal, contact Rhodes at rrhodes@ctriver.org.

According to Sagerman's report, an 1869 map shows the first record of a home on the property, owned by Charles O. Reed, a farmer who lived there with his wife Angie and their sons Herbert, Albert and Henry. Albert acquired the property from his parents in 1914 and lived there until 1939. In 1940, the property was sold to the Vaughans, who within a few years had acquired other adjacent parcels, enlarging the property to 188 acres.

"The acquisition of old Vermont farms by people from the New York and Boston metropolitan areas was not an uncommon occurrence. The State of Vermont began to promote the sale of farms in 1891, when "Vermont, Its Resources and Attractions, With a List of Desirable Homes for Sale," was published by the Vermont Department of Agriculture. This trend picked up as time went on, and the Vaughans may have been influenced by the Vermont Bureau of Publicity's 1930s publications such as Vermont Farms for Sale, Vermont Farms and Residential Properties for Sale, and Vermont Summer Homes, which actively advertised Vermont country living to out- of-staters. It is likely that many of the summer people who acquired old farms built small dams on their properties in order to create swimming ponds."