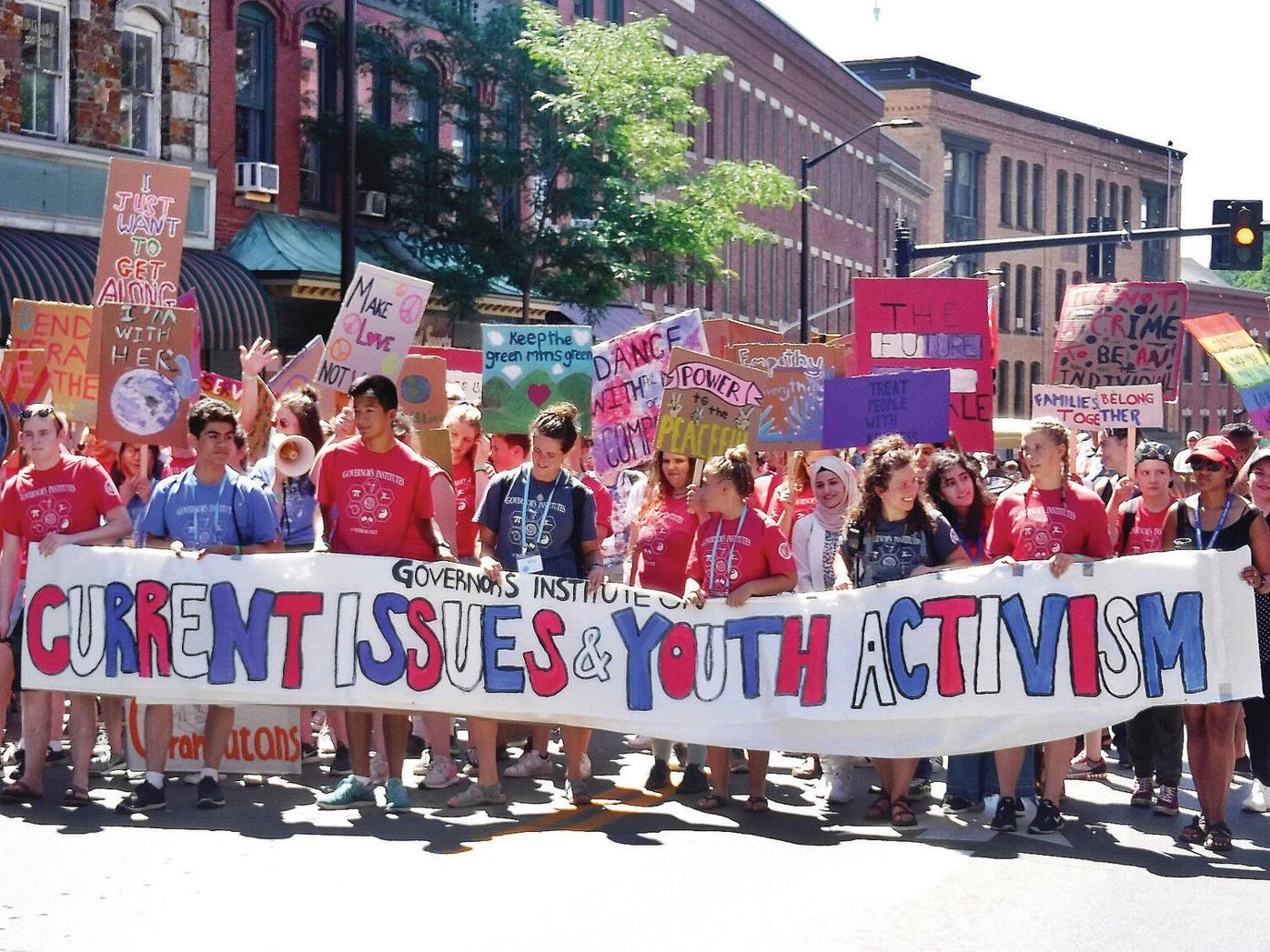 Kevin O'Connor - Reformer CorrespondentTeenagers from the Governor's Institute on Current Issues and Youth Activism parade through downtown Brattleboro this Fourth of July. 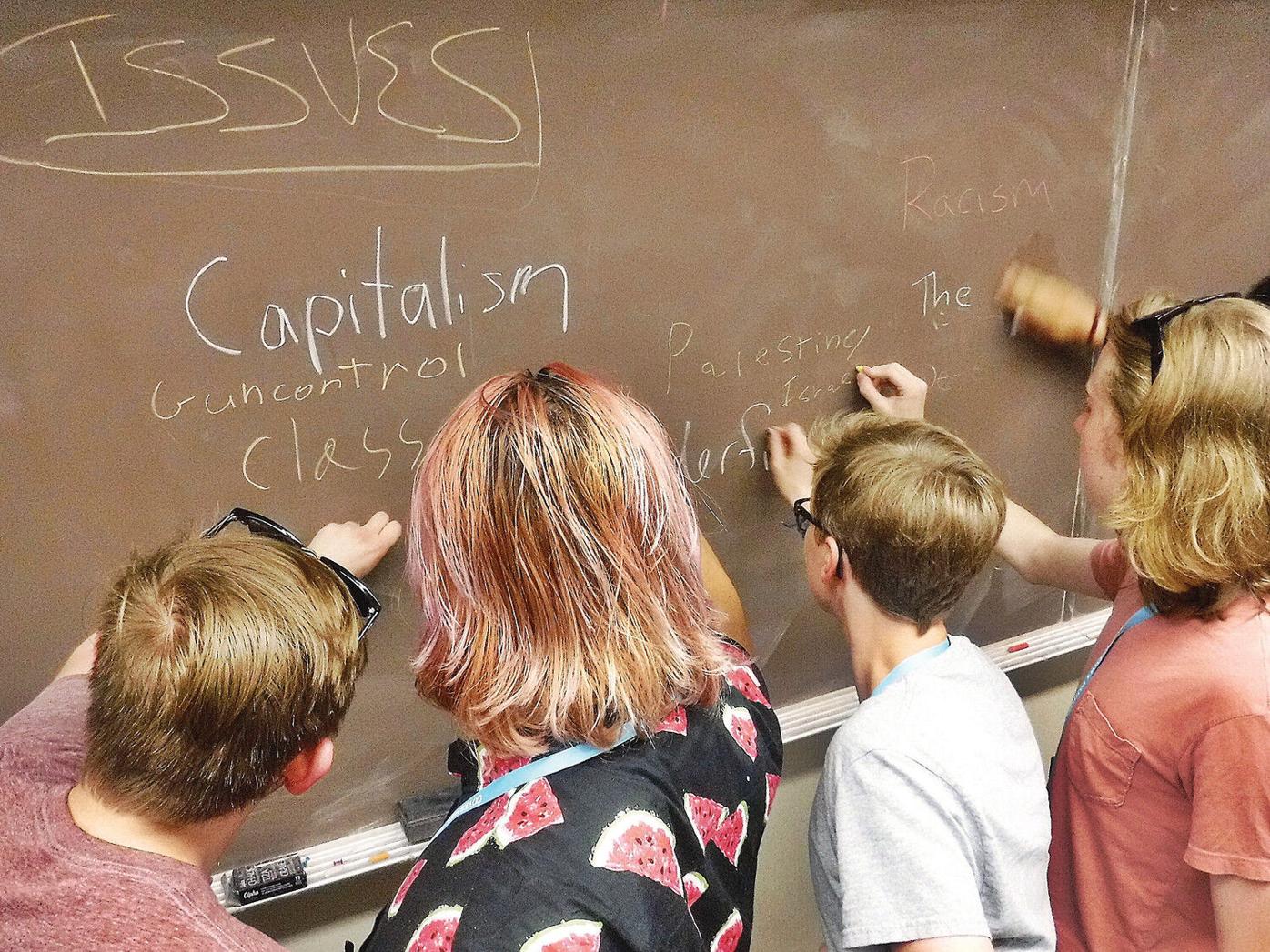 Teenagers write down issues they're interested in at the Governor's Institute on Current Issues and Youth Activism at Brattleboro's School for International Training. 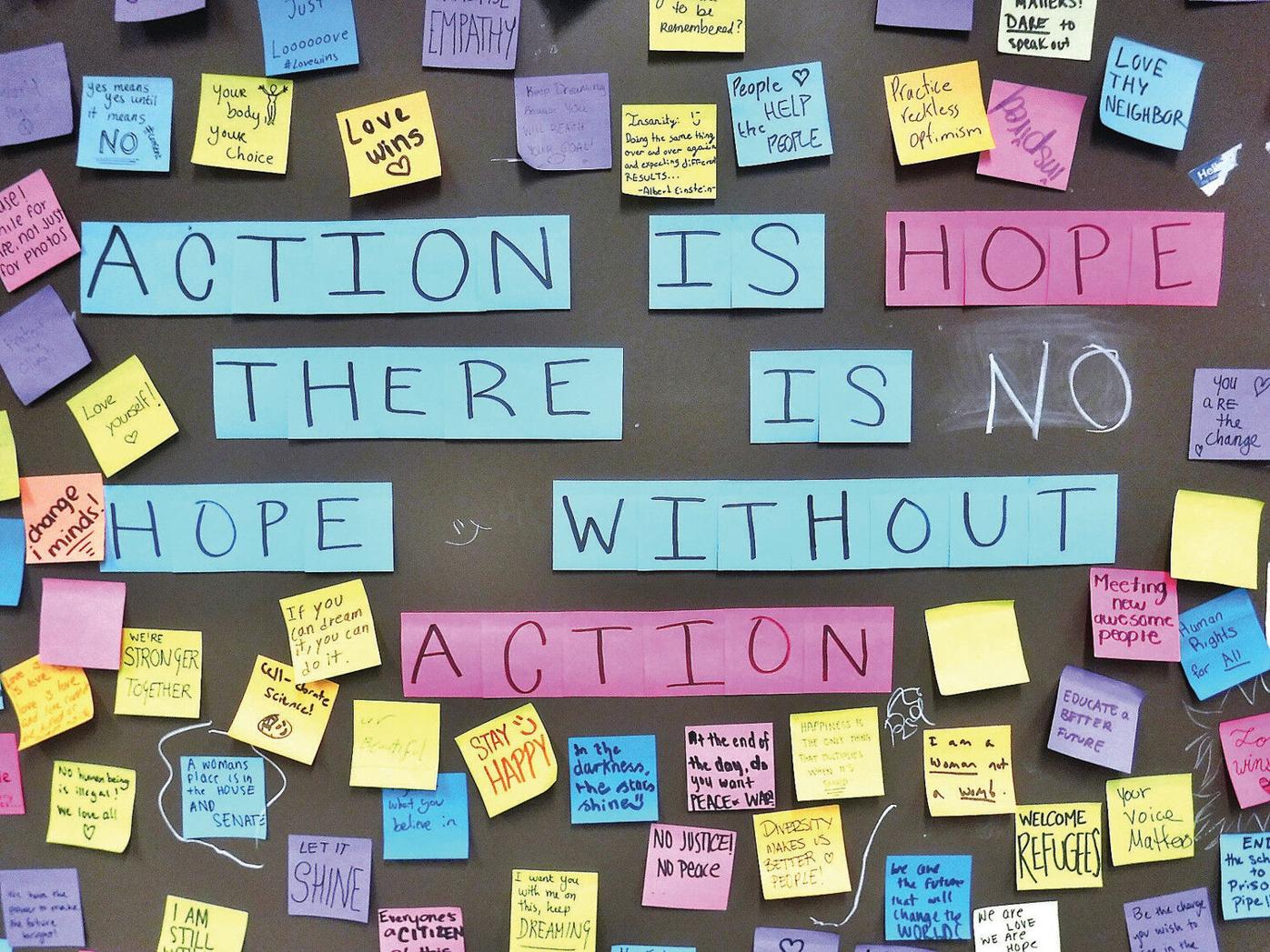 A student-made bulletin board greets visitors to the Governor's Institute on Current Issues and Youth Activism at Brattleboro's School for International Training.

Kevin O'Connor - Reformer CorrespondentTeenagers from the Governor's Institute on Current Issues and Youth Activism parade through downtown Brattleboro this Fourth of July.

Teenagers write down issues they're interested in at the Governor's Institute on Current Issues and Youth Activism at Brattleboro's School for International Training.

A student-made bulletin board greets visitors to the Governor's Institute on Current Issues and Youth Activism at Brattleboro's School for International Training.

BRATTLEBORO — When teacher John Ungerleider began leading what's now the Governor's Institute on Current Issues and Youth Activism in 1990, he hoped to link Vermont teenagers to the world at a time before smartphones and social media. Today, students need only tap a screen to stay in touch. But Ungerleider still believes some things are better left unplugged.

"I wouldn't say that online is not bringing people together," he said of an electronic era that also powers cyberbullying and political polarization. "But here, there's direct human connection."

Some 70 institute participants are discovering that at Brattleboro's School for International Training this month as they trade Facebook for face time to learn how to respectfully and responsibly talk — and listen — about the latest trending topics with local, state and national leaders.

Take Ethan Fritz, 15, of Bristol, a self-described "pretty right" (as in conservative) student who raised his hand when U.S. Rep. Peter Welch, D-Vt., arrived to discuss his recent visit to a migrant detention center along the Texas-Mexico border.

The soon-to-be sophomore at South Burlington's Rice Memorial High School said the Trump administration was receiving criticism for separating children from their parents. But the student questioned why, as he had read online, the Obama administration supposedly had done the same thing.

Welch called that latter claim fake news. Fritz, pausing for a moment to consider the statement and its source, apologized for any confusion and expressed appreciation for the clarification. What could have sparked a war on Twitter instead turned into an unscripted demonstration of de-escalation.

"I think he respected where I'm coming from, and I respected where he's coming from," said Fritz, who in turn is respected by his liberal peers. "A lot of what goes down today is two ignorant sides pointing at each other. I've always liked debating people, but there's no point in arguing if you're just going to fight."

Students increasingly are finding themselves in the news — not only as targets in school shootings but also, as seen in the case of Parkland, Fla., teenagers on a recent cover of Time magazine, as advocates for themselves.

"I think some of the challenges and struggles young people are facing today are more intense than those of 10 or 20 years ago," says Simon Norton, the institute's co-director.

"It's your time to be the leaders," colleague Ungerleider told participants at a welcome session. "How do we work on issues without just yelling at each other?"

Teenagers began by writing down all the topics they wanted to explore. Take income inequality. And immigration. Gun rights and regulation. Government transparency. Why are schools being closed under the state's education governance law Act 46? Who can reduce the cost of college and the number of people in prison? And what about addressing drug abuse and the larger health of people — not to mention racism and sexism — and the planet?

"How do you feel looking at that?" Ungerleider said of the list. "It's a lot. We can't take this on ourselves."

Students spent the past week learning communication and collaboration skills with SIT faculty and fellow teenagers from Ireland and Iraq, as well as through a phone call from U.S. Sen. Bernie Sanders, I-Vt., and in-person visits from regional leaders.

Former Rutland City Mayor Christopher Louras, for example, explained how his support for a plan to welcome Syrian refugees cost him re-election. Blaming the loss on fear held by longtime locals, he nonetheless voiced hope for the future.

"Who is making the difference?" he said. "Students."

"These are the same board members who wrote letters to stop refugee resettlement," he said. "They supported it unanimously because the students articulated the need so well."

Youth often are ahead of the curve, organizers here confirm. Institute participants annually make and march with signs at Brattleboro's Fourth of July parade, having advanced causes such as same-sex marriage and marijuana legalization years before the state Legislature adopted them.

In a state that cast the lowest percentage of votes for President Donald Trump (30 percent), students tend to lean more left than right. Fritz, for example, was the lone marcher with a sign declaring "my gun hasn't killed anybody." But the institute, as seen in all the diverse messages around him, is open to every opinion.

"This isn't about presenting an agenda — what they're learning is how to think about issues, not what to think," says the program's executive director, Karen Taylor Mitchell. "The need for teaching skills that give people the power to work together — listening, respect, balance, understanding of others — has never been more timely."

The institute is one of nearly a dozen taking place this summer at campuses statewide. The program on mathematical sciences just received a $250,000 endowment. For its part, Current Issues and Youth Activism may see a few changes as a result of SIT restructuring, although organizers continue to see a need.

Says Norton: "We are at an incredibly divided time. Part of our task is to find a way — despite all our differences, which are amplified and exaggerated — to come together and have civil civic discourse."

And Ungerleider: "It's not about arguing to show 'I'm right,' it's about the spirit of inquiry. We're hoping this trickles out. It's something that could and should be replicated on the outside. At a time when there's not much respectful, deep dialogue, we need to learn how to have it."

Kevin O'Connor is a Reformer and VTDigger.org correspondent who can be contacted at kevinoconnorvt@gmail.com.