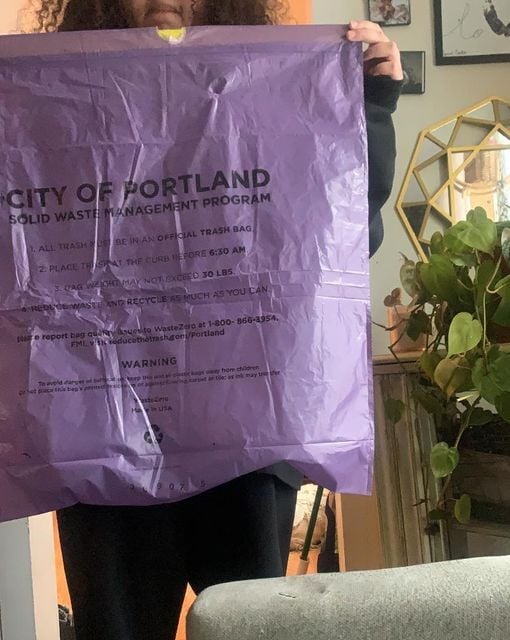 Rose Billetdeaux of Brattleboro holds up one of the Pay As You Throw trash bags labeled "City of Portland" mistakenly sent to Brattleboro residents last week. 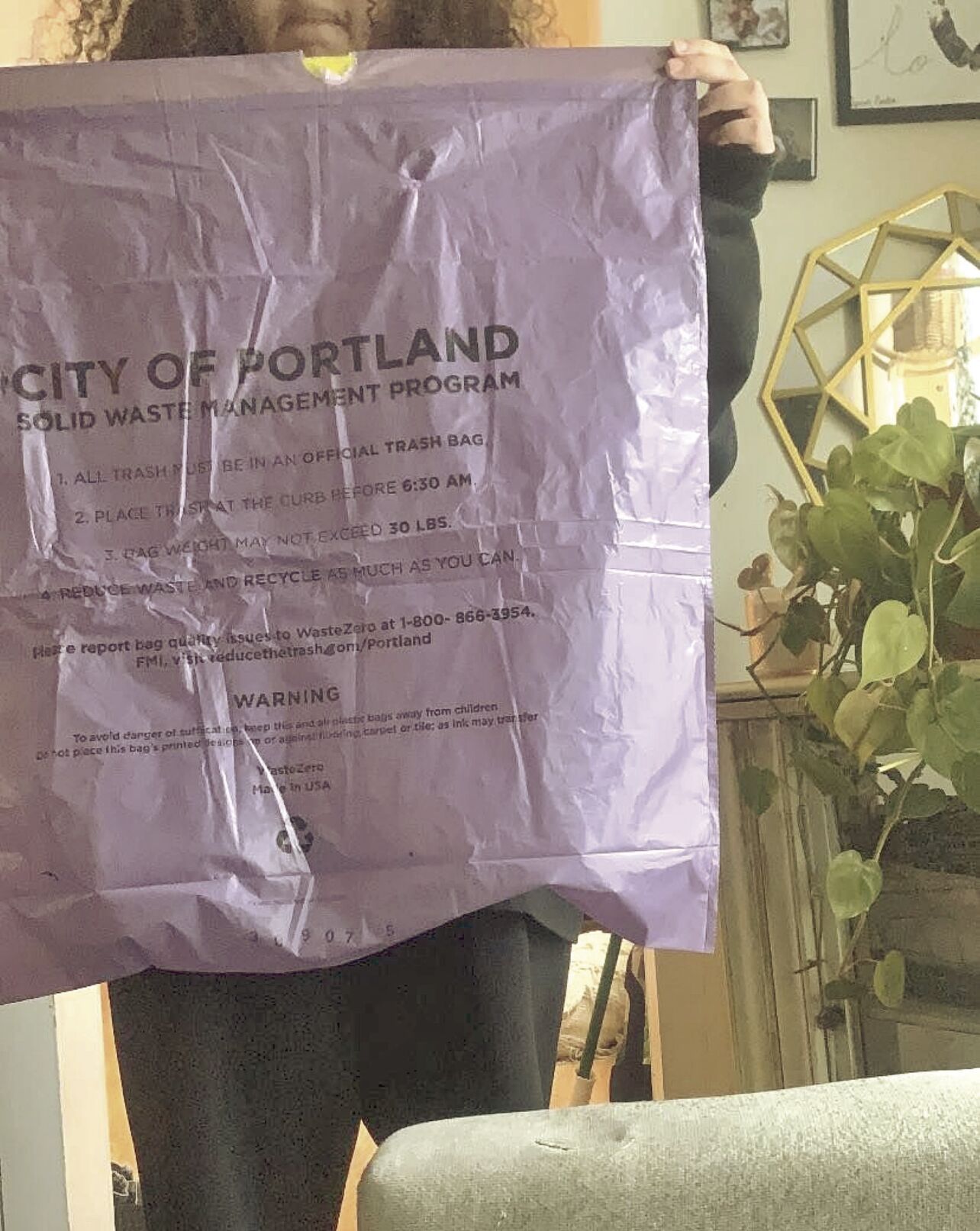 Rose Billetdeaux of Brattleboro holds up one of the Pay As You Throw trash bags labeled “City of Portland” mistakenly sent to Brattleboro residents last week.

Rose Billetdeaux of Brattleboro holds up one of the Pay As You Throw trash bags labeled "City of Portland" mistakenly sent to Brattleboro residents last week.

Rose Billetdeaux of Brattleboro holds up one of the Pay As You Throw trash bags labeled “City of Portland” mistakenly sent to Brattleboro residents last week.

BRATTLEBORO — Phone lines went down and mislabeled garbage bags went out, causing some frustration around town.

When postcards about absentee ballots for the March 2 election started going out last week, the town’s phone lines stopped working for about two days due to an issue within the system that affected other groups as well. The state’s online My Voter Page also wasn’t working around the same time.

“The card is encouraging people to either call the town clerk’s office or go to MyVoterPage and people were striking out in both efforts through no fault of their own,” Town Manager Peter Elwell said at the Select Board meeting held remotely Tuesday. “There was a lot of frustration around that understandably.”

The website is back up and the town clerk’s office can again take calls. Emails also work.

About a week ago, the town experienced an issue with bags for its Pay As You Throw residential curbside trash pickup program.

“There was a snafu at the manufacturer a couple of weeks back and they shipped to Brattleboro some purple bags that were marked for Portland that were meant to go to Portland, Maine,” Elwell said. “This is funny for most of us. It’s not funny for the one group of people who filled purple bags and put them out at the curb the first time Triple T encountered these bags and said, ‘I don’t know who thinks they’re cute but we’re not picking up Portland.’”

Elwell said Triple T “understandably” didn’t pick up the Portland bags but the issue didn’t came to the attention of town staff until the hauler was on to its next route. The missed households had to wait until the next pickup. Trash in town is picked up every other week.

The issue is believed to be corrected by the supplier, WasteZero, and any leftover Portland bags will be accepted at the curb or exchanged by contacting the town treasurer’s office at 802-251-8153, ddesrosiers@brattleboro.org or bemery@brattleboro.org. The Portland bags hold about 3 gallons less than the 33.5-gallon Brattleboro bags.

“We expect that the supply of Portland bags is relatively small and will be used up quickly, and we’ll all get back to normal,” Elwell said. “This was the manufacturer’s error and they were also really good about how responsive they were and they threw out a lot that they discovered before they got distributed. They also made arrangements with folks who sell these bags in town.”

Select Board Chairman Tim Wessel said the bags will now be “collector’s items.”

Elwell said the Select Board didn’t make any policy decisions to put articles about withdrawing from and dissolving the Windham Southeast School District on the March 2 ballot.

“It’s important for folks to understand that in the time when there was a town school district, the town ballot included things that were put there by the Select Board and things that were put there by the school,” he said, adding that the consolidated regional school district doesn’t have any authority to put an article on the local ballot. “So when the regional school board decided to pose these two questions to the participating towns, they needed to ask the select boards in the participating towns to put the items on the ballot. The School Board did ask us to do that.”

Elwell said he consulted Town Attorney Bob Fisher then presented it to the board, which agreed to warn the articles on behalf of the School Board. He noted there have been questions in the community about whether the questions should even be considered and how residents should vote on the matter. He suggested reaching out to the School Board with questions.

The board approved applying for $12.5 million of financing through the state’s Drinking Water State Revolving Loan Fund for the town’s proposed replacement project at the Pleasant Valley Water Treatment Plant. Town Meeting members will decide whether to seek funding at annual Representative Town Meeting on March 20 and 21, but town staff encouraged submitting the application now to “preserve the town’s high priority status on the state’s list of projects for 2021,” according to an administrative report.

There could be a subsidy covering as much as 25 percent of the project if the bond vote is approved, said engineer Christina Haskins. The hope is to start opening bids in early May.

An informational meeting about the project will be held at 7:30 p.m. March 17 via Zoom.

“I’m excited about it,” said Steve Barrett, director of the town’s Department of Public Works. “It’s been many, many years coming.”

The board authorized town staff to accept a quote from Green Mountain Power to upgrade to three-phase power at the Signal Hill Pump Station for $18,662. Barrett anticipates the station will operate more efficiently.

The board also ratified the town manager’s decision to spend about $12,777 to rebuild a grinder at the wastewater treatment plant after the Muffin Monster grinder recently failed. Barrett called the grinder “very important” and said it worked reliably for the last decade or so. His crew suggested a rebuild rather than replacing it.

Elwell described some “good news” about the quarterly transfer from the state for local option sales tax receipts. He said the sales tax for October, November and December brought in $240,653, the highest quarter yet, beating last quarter by $10,000, which had previously been the best.

The rooms and meals tax isn’t performing well compared to what had been budgeted. Elwell noted the budget had been created prior to the pandemic.

“I think it’s really important for us to recall,” Elwell said, “back in the summertime, there actually was a fair amount of outdoor dining going on, then the cold weather came and people had to go back to curbside pickup ... Just with meals alone, it would make sense there would be a drop off.”

The latest quarter looks low, Elwell said, but it would have looked normal as recently as 2015.

“So given everything that has happened in the economy and public health, not bad,” he said.