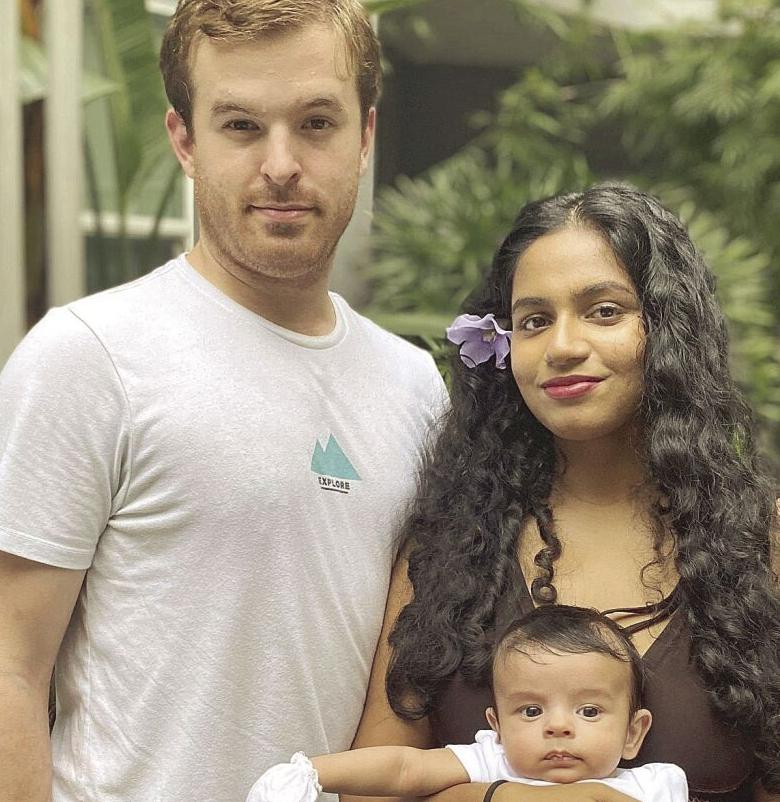 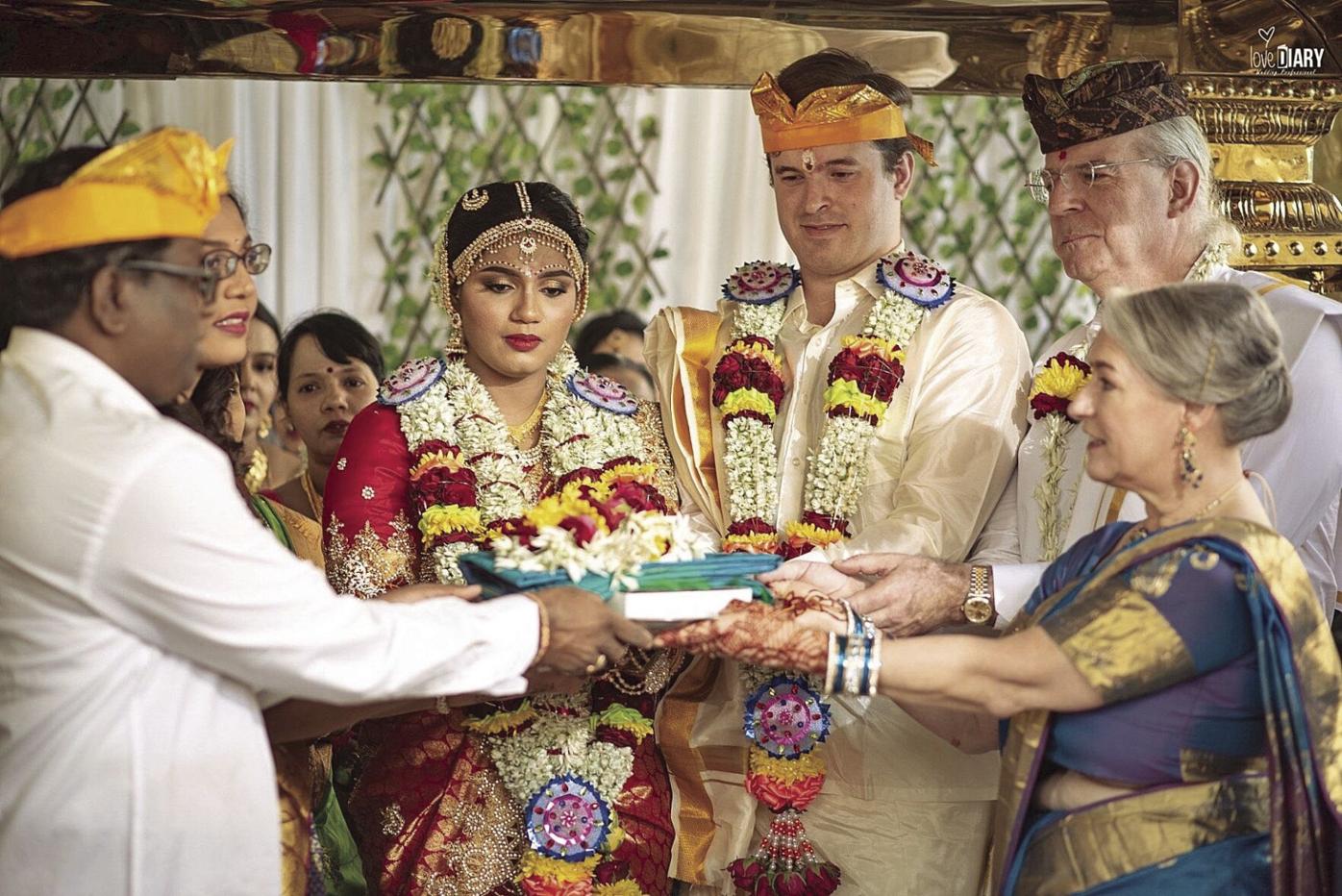 Audrey and Flint Rowell, surrounded by family, were married in Yangon, Myanmar, in a traditional Hindu ceremony in 2019.

Audrey and Flint Rowell, surrounded by family, were married in Yangon, Myanmar, in a traditional Hindu ceremony in 2019.

A Myanmar native with ties to Vermont is bemoaning the loss of her country’s fledgling democracy.

“The safety net called ‘back home’ has been destroyed,” said Audrey Rowell, wife of Flint Rowell, a former Townshend resident and a Putney School graduate. “There is no future there. It’s basically a dictatorship and I don’t want to bring my son home to that.”

Audrey met Flint in 2017 while both were attending Drexel University in Philadelphia.

“We had a plan to have our son spend summers in Yangon,” said Flint. “He could learn the language and the culture and have connection to his heritage. But I’ve realized he may never get to do that. That future has been robbed from him.”

In 1990, the National League for Democracy won 81 percent of the seats in the country’s Parliament, but the results were nullified and the military-backed government refused to hand over power to the NLD’s leader, Aung San Suu Kyi. From 1989 to 2010, Suu Kyi spent 15 of those years under house arrest. But in 2011, Suu Kyi was released from custody and in 2015, the NLD took 86 percent of the seats in the Assembly of the Union, the bicameral legislature of Myanmar. She took on the newly created role of State Counsellor of Myanmar, which is similar to a prime minister or a head of government.

On Feb. 1, the Myanmar military overthrew Suu Kyi and her government and reasserted control over the country.

Those years leading up to the 2011 release of Suu Kyi were heady days, said Audrey, when it looked as if the Myanmar military was loosening its grip on power.

Audrey took advantage of the relaxation of rules to visit the library of the British Council in Yangon, where she read books by Judy Blume as well as “The Princess Diaries,” and the Harry Potter novels.

“The embassy library was like a crack in the bubble we lived in,” she said. “I began to see beyond the community I lived in. From those books, I learned about the systems in the United States and Britain. All these books made me think my childhood was so different from what it could have been in another country. The more you read, the more you understand what freedom is. I wanted to find that and I fixated on going abroad.”

Audrey, whose family is Tamil, an ethnic minority in Myanmar, even went as far as to take the entrance exams that would allow her to travel to the United Kingdom, but at the last minute, she chose the United States, going to Harvard University in Boston in 2012 to participate in a summer school.

In 2018, Audrey and Flint flew to Yangon and spent the next two years traveling around Southeast Asia. They married in 2019 in a traditional Hindu ceremony in Yangon and shortly afterward, she became pregnant. In early 2020 they traveled to Florida to visit with family.

“And then COVID happened,” said Audrey. “We have been in Florida since last March.”

Audrey, who had traveled to Vermont to meet Flint’s parents, says she looks forward to returning to Vermont when the pandemic is over.

“I love Vermont and Townshend,” she said. “It’s amazing.”

“I cannot tell you how much I miss the cold weather,” said Flint. “We are really looking forward to returning so my grandmothers can meet their great-grandson.”

“Flint’s marrying Audrey has expanded my world immeasurably,” said his father, Rob Rowell, who grew up in Wilmington as the son of a Vermont game warden.

Rowell and his wife, Susan, visited Myanmar for the wedding and to meet Audrey’s family; he said he was shocked by the way their son’s in-laws were treated as an ethnic minority.

“I saw this in action when I was there,” said Rowell, a former attorney who practiced in Townshend but now lives in Newfane. “We stayed in a very nice hotel and became friendly with the wait staff in the restaurant. They asked why we were there and we shared for our son’s wedding. That was well received until we showed a picture of Flint and Audrey and got ‘She’s Indian?!?!’ as a response. In tourist areas things went OK until Audrey spoke fluent Burmese which identified as a local and not a tourist and the mood changed quickly, and not for the better, in how she was treated.”

“Minorities in my country are usually very poor and very oppressed,” said Audrey, whose father runs a factory in the country. Because of his position, Audrey was raised in a relatively privileged household, especially when compared to other Tamils in Myanmar. But her parents knew there wasn’t much of a future for her in her native country.

“They loved me enough to let me leave the nest,” she said.

She still pines for her country, but realizes she will probably be in the United States for many years to come.

“Myanmar is so beautiful,” she said. “But we have no choice but to settle down here because of our son, Will, who is now eight months old.”

“I worry that what we have seen in Myanmar since Feb. 1 is just the beginning,” said Flint. “I am going to miss the country, because when I was there I really didn’t get to do everything I wanted to do. For a country that was just starting to open up, now it feels like they’ve had everything taken away.”