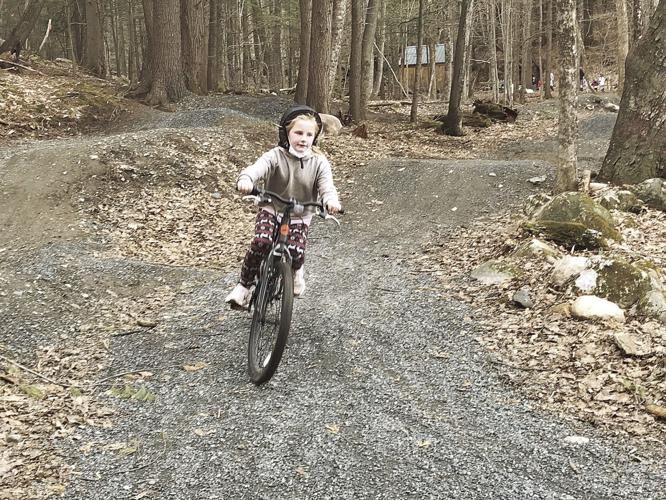 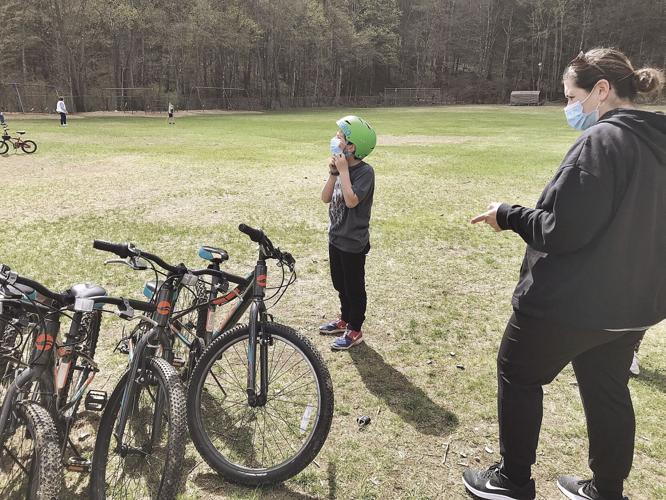 Vinny Doell gets ready to borrow a bike after his mother, Desiree Stango, brought him to Academy School on Monday, April 19, 2021. 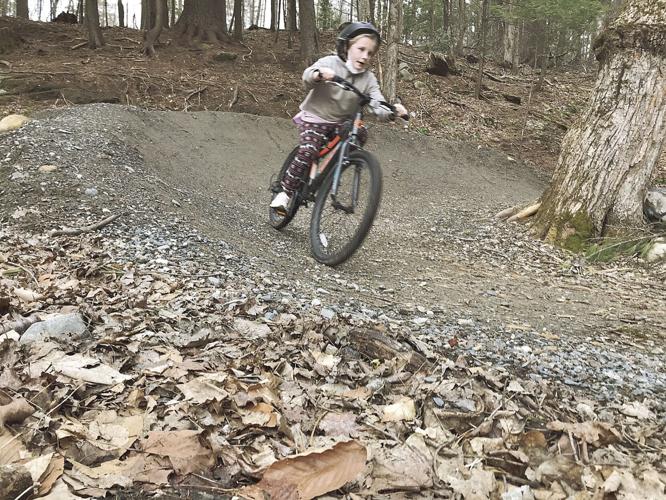 Vinny Doell gets ready to borrow a bike after his mother, Desiree Stango, brought him to Academy School on Monday, April 19, 2021.

BRATTLEBORO — Third-grader Vinny Doell was glad to hear he’d get to go biking on trails behind the school over spring break.

Stango brought Doell and her niece Lexi Corpela, a third-grader who formerly attended the school, to hit the trails Monday morning.

“The pump track is really fun and I like biking with my friends,” Doell said.

Corpela called the jumps “way too scary.” She avoided them but navigated the berms of the pump track with a smile.

Inspiration for the trail system came from Putney Central School, which had a biking program for years and also is part of the Windham Southeast School District.

“They built a pump track and have a collection of school bikes,” said Jon Sessions, assistant principal at Academy School.

Over the last couple of years, Sessions worked with the Academy School community to achieve the same thing. Last summer, he built some trails behind the school with a group of parent and student volunteers.

Now, there’s a big pump track with cross-country trails and bridges. It’s all on land owned by the Smith family, who allowed the school use of about 200 acres behind the school.

Sessions said a collection of bicycles at the school has been building up for use during recess, physical education, after school and other times. And in the last few weeks, Local Motion of Burlington brought a trailer with 50 mountain bikes for children to the school to encourage the sport.

“For us, it’s just been an incredible experience,” Sessions said. “The kids are so excited to ride the bikes.”

Stango said her son comes home from school saying his favorite part is bike riding. On Monday, he said a new trail was too wet from recent rain to ride.

Some students who never learned how to bike now know how to and the program has “very much increased activity on the playground,” Sessions said. He was happy to report there had been no behavioral challenges for any students in the last two weeks, since Local Motion dropped off the bikes.

“Kids are just excited to be out there biking, developing confidence in themselves and developing really healthy habits,” he said. “It aligns with the mission of our school, too, that school extends beyond just academic development.”

School staff look for ways to promote physical health, emotion wellbeing and learning outside in the nature.

“It’s a real priority for our school,” Sessions said, noting that teachers embraced outdoor learning this year and before the COVID-19 pandemic. “It’s really become part of our identity and now with the bike program, it’s really great.”

Daq Woods, a local mountain bike teacher and bike mechanic, is anticipated to start a biking club at the school soon.

The bike park at the school is available to the community outside of school hours. Sessions said a lot of children come ride the park on weekends.

“We’d like to see the trails as a community resource,” he said. “It’s all volunteer designed and built.”