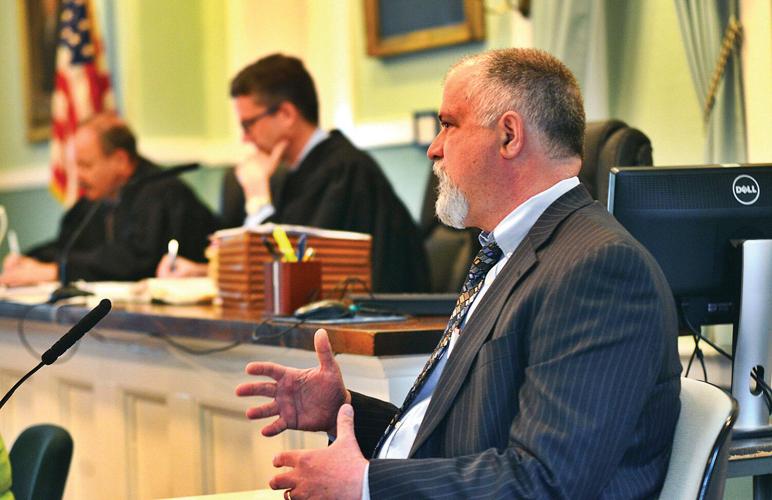 Peter Landauer, who manages loans at Berkshire Bank, gives testimony during a hearing on Thursday, May 10. 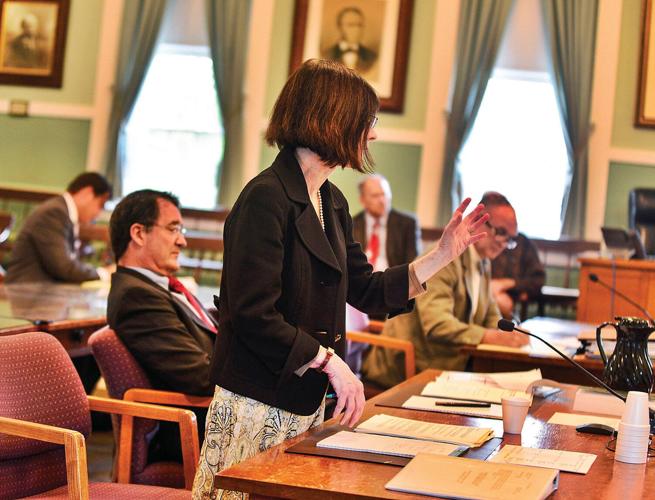 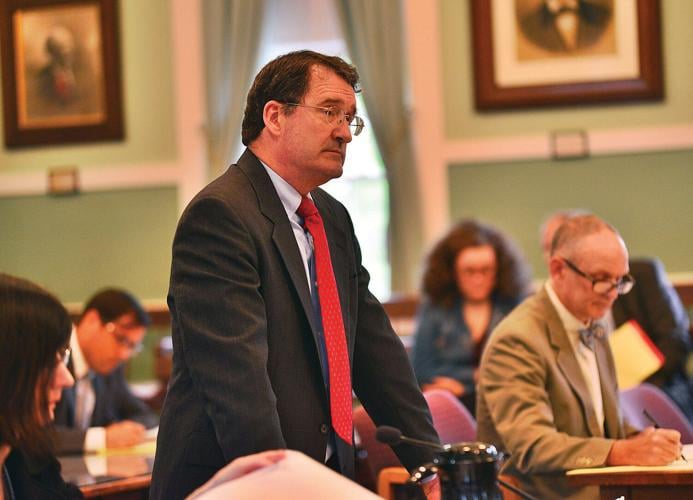 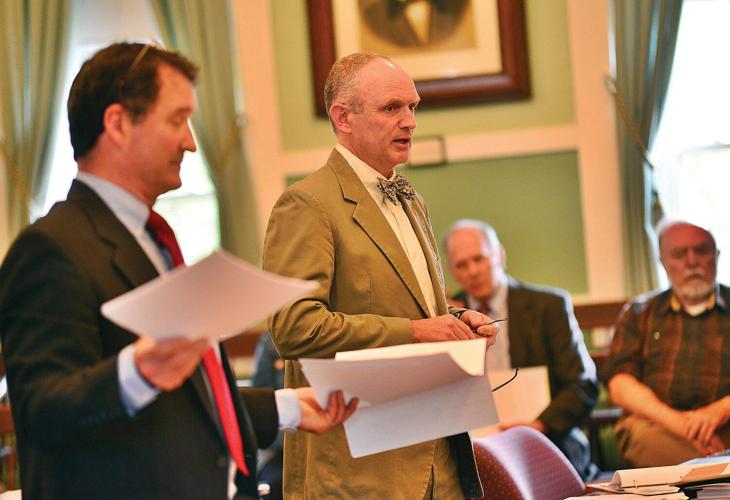 Peter Landauer, who manages loans at Berkshire Bank, gives testimony during a hearing on Thursday, May 10.

NEWFANE — A second investment group willing to take on the financially troubled Hermitage Club's mortgage debt emerged Thursday at a hearing that will decide whether the court will appoint a receiver for the private ski club and vacation resort.

No decision was reached during the hearing, at Windham Superior Court Civil Division.

Berkshire Bank is seeking to have a receiver appointed for the club, which it foreclosed on in February for nonpayment of the mortgage.

In court filings two weeks ago, the Hermitage Club said an unnamed lender — revealed Thursday as Rich Bonnanzio of Milford, Conn. — had extended the Hermitage a $26 million term sheet, being held in escrow by Wells Fargo Bank.

As for Berkshire Bank, its attorneys insisted that despite the multiple offers, a receiver should still be appointed to make sure the property retains its value and remains protected.

Trip Morse, a member of the Hermitage Club who runs a West Dover office for the Keene, N.H.-based Clark-Mortenson Insurance, said he brought Bonnanzio, a founder of North One Capital Partners LLC, to Barnes about seven weeks ago after a client of 10 years introduced them. North One is listed as a Salt Lake City, Utah, company.

"We vetted him for about 10 days before I introduced him to Jim [Barnes]," said Morse, noting that Bonnanzio has connections to Vermont and once had plans to redesign Magic Mountain in Londonderry.

Morse told the court the terms of a redacted Wells Fargo Bank term sheet that would give the Hermitage $26 million to pay off the debts were "absolutely" still alive. He believes more investment in the local community would follow.

"My understanding is they fine-toothed all the money that's owed from liens to banks to creditors and everything, and his mission is to make everyone whole," he said. "There won't be any, 'I'll give you 70 cents on the dollar or anything."

Morse told the court that Paul Lockyear, who owns the Nutmeg Inn in Wilmington and has a background in investigating financial crime, could not be at the hearing but had introduced him to Bonnanzio.

Fisher made the revelation that the bank had a separate term sheet with Mark Greenberg, who owns a real estate company in Connecticut. Fisher said Greenberg intends to buy the note from the bank on May 15 and would have the Hermitage ready for the upcoming ski season.

Attorneys for Berkshire Bank would not comment about the new development after the hearing. But Peter Landauer, a vice president who manages "above-average risk" loans for the bank, told the court he had spoke with Greenberg as recently as Tuesday.

Landauer claimed to be unaware of any restructuring plans. He said the bank wants a receiver as long as it owns the note.

Berkshire Bank has the right through its mortgage agreements to call for the appointment of a receiver before the sale of the properties.

"I am trying to get this foreclosure processed through as quickly as I can," said Elizabeth Glynn, a Rutland attorney who represented Berkshire Bank. "It's probably the largest foreclosure I've been involved with. It might be one the biggest foreclosures in the state of Vermont."

She worried the properties would "deteriorate in value" if a receiver is not appointed to watch over the assets until they are sold.

"The court is going to take this under advisement and we'll plan to issue a decision shortly," Judge John Treadwell said at the end of the hearing. "The court just needs some time to consider all of the proposals here."

Landauer said he has seen several proposals from different firms or lenders to refinance the bank's loans but none of them had gone anywhere. The Hermitage was assigned to him in August 2016.

"It caters to very wealthy members," he said, describing the private ski resort at Haystack Mountain, a golf course and four inns that are subject to the foreclosure, span about 838 acres and are worth more than $32 million.

Landauer provided the court with some insight into the bank's efforts to work with the Hermitage before it foreclosed.

"When a borrower is having severe liquidity problems, which the Hermitage was, it's very common for the bank to request that the borrower engage a chief restructuring officer to help solve the liquidity issues," he said. He pointed out that the Hermitage defaulted on more than $17 million worth of loans with the bank, failed to pay property taxes in Dover and Wilmington, and owed Suburban Propane and Green Mountain Power as well as a list of vendors and contractors. "They ran out of cash in the first quarter of 2018," he said.

Landauer said a future owner would have the same rights to sewer and water allocations as the Hermitage. He believes it would be best to sell everything lumped together to maximize the value. He called the appointment of a receiver "crucial" to maintaining the value of the properties and getting good bids from potential buyers. He worried buildings could be broken into or vandalized if not properly guarded.

"Someone has to preserve and protect this asset," he said. "I don't know exactly how many people would be required but it's our judgment that this collateral requires 24/7 security."

His group would like Alan Tantleff, of FTI Consulting, to be appointed as receiver at a rate of $32,500 for the first two months then $16,500 for every month until the sale. The bank would pay the cost of the receiver but the fees would be added to the amount owed under the mortgage as long as the court agrees to the terms. Treadwell expressed concerns about the bank's proposal to have the same attorneys representing the receiver and itself.

Landauer said several other firms were interviewed but Tantleff was preferred because of his experience including a ski venture similar to the Hermitage called Yellowstone Club in Montana.

Attorney Jim Anderson, who also represented the bank, argued against allowing the Hermitage to run the property and pointed to $12 million in liens.

"It's a small village and it needs to be looked after and the Hermitage has demonstrated no ability to do that," he said.

He said the receivership could be dissolved if new financing is arranged.

Treadwell asked about the bank noting in court documents fraud allegations in other ongoing litigation. Anderson did not have any evidence but mentioned there had been claims in the community. He said, "Let's just say it's not a well-run business, your honor."

Anderson called Morse's testimony "hearsay," as he is not a principal or agent of North One Capital. He said any portrayal of Bonnanzio as "a white knight" is a fantasy.

"He couldn't pay his $5,000 for condo fees," Anderson said, referring to separate litigation. "He filed for bankruptcy. I wouldn't put a lot of stock in that."

Fisher argued that since the Vermont Department of Taxes shut down Hermitage establishments in March, there has been no business and a "skeletal crew" has maintained and kept watch over the properties. He requested that if the court chooses to appoint a receiver, that it should be limited in scope and happen in 60 to 90 days.

Attorneys representing several subordinate lien holders, listed as defendants in the foreclosure complaint, were also present at the hearing.