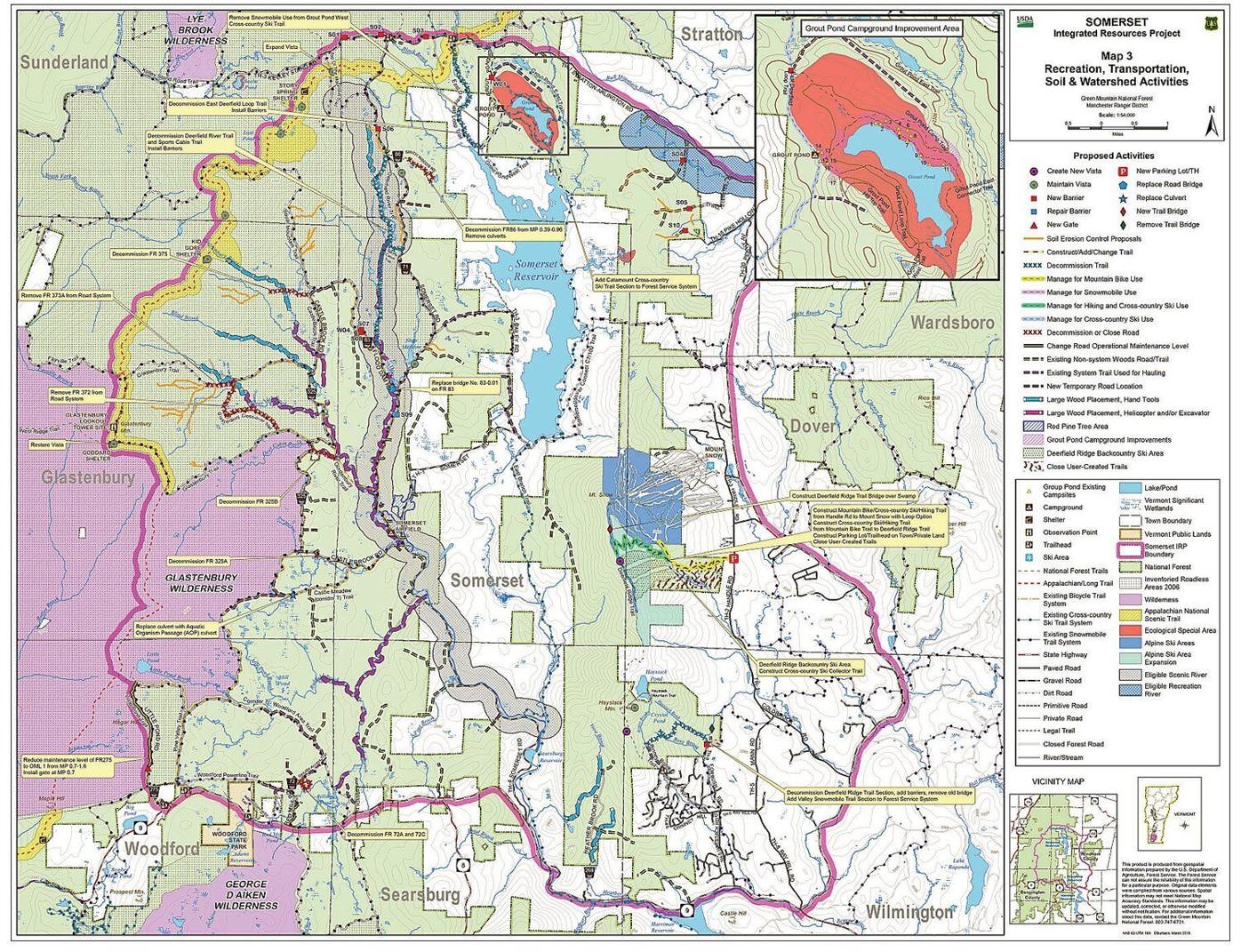 DOVER — A large part of a new plan for United States Forest Service land spanning more than 70,000 acres over Windham and Bennington counties is dedicated to the Deerfield Ridge Trail.

"It's everything we had in mind," said Andy McLean, a member of the Dover Area Recreation Trails Committee and Southern Vermont Trails Association board who helped spearhead the project. "It's really, really cool."

The plan calls for expanding backcountry access for a trail sitting between Mount Snow and Haystack Mountain for biking, hiking and skiing. McLean, who also serves as Dover's town clerk, has been advocating for the project for years.

A 45-day period for objections to what is called the Somerset Integrated Resource Project will end Oct. 2. The project includes "activities to improve wildlife and fish habitat, restore soil and water conditions, increase recreation and scenery viewing opportunities, improve and sustain the road network, and protect heritage resources," states a public letter about the process from Manchester District Ranger David Francomb.

The plan received a final environmental assessment, a draft decision and a finding that "no significant impact" will occur with the outlined actions. Reaching this point "means the Forest Service is behind it," McLean said.

"They've had plenty of comments and they've anticipated all the objections, I'm sure," he said. "I'm really excited about it."

For many years, McLean said, the Forest Service's mantra has been "no new trails."

"They don't have the personnel or budget to really maintain and deal with the trail system they have, so adding new trails, it just hasn't happened in recent memory," he said. "They chose our project. Everyone wants new trails in the National Forest, all the different users, but our proposal happened."

McLean credited a partnership developed between the Forest Service with the town of Dover and the Southern Vermont Trails Association. He described the project as "high-profile."

"It would be good for the Forest Service — the more people who are having fun in the national forest and enjoying the beautiful project like that, the better the light they are casting," he said. "We just manage to be the lucky project, you know, that they got behind. It's really fantastic for Dover, for sure."

With final approval anticipated to come in the colder months, McLean said construction will have to wait. But he still sees the opportunity for people to begin exploring the area in the winter.

"So it doesn't need to be built to be used necessarily — anyone can go up there," he said. "It's tight. It's difficult without any glading."

McLean suggested the potential for the area to be visited more heavily than in the past if chairlifts at local resorts are compromised by the coronavirus pandemic.

"For the stuff that we can't handle, people will be hired," McLean said. "They need partners, is the bottom line. They don't have the personnel or budget to get it done. We're there."

The plan involves constructing about 2 miles of new trail to connect the town to Mount Snow trails and the National Forest Trail System. Segments are set to include 1.6 miles from Handle Road to the southern Mount Snow ski slopes and 0.4 miles for a beginner-level loop.

The backcountry area is defined as three zones totaling about 180 acres. According to the plan, vegetation would be removed or thinned within the zones to a width of 15 to 30 feet, but that would not include removal of all the trees within a skiable line — trees are being retained "to maintain a closed canopy to support continued natural ecosystem processes and the characteristics desirable for a backcountry skiing experience."

Signs at a trailhead on Handle Road would indicate what skill levels are necessary for the trails and include notes on "safety information, backcountry ethics and wayfinding," the plan states. A parking area, 150-feet wide by 25-feet deep, is anticipated to fit about 13 vehicles with design and construction to be covered by the town of Dover.

The ridge trail will "absolutely" bring more people to town, Durocher said. He noted there being a big focus on outdoor recreation since the start of the pandemic.

"We don't know how long it's going to be around," he said of the virus. "We're seeing levels of hikers and bikers on our trails, I don't know if we've ever seen."

Durocher described the ridge trail as a way "to enhance the opportunities that we have here in town" and bring more visitors to the ski-resort community all year long.

"Any time we can expand on our offerings, it's something we want to do," he said.

The Forest Service's plan also includes improvements at Grout Pond and adding to the National Forest Trail System 0.7-mile existing segments from the Catamount Trail on the northeast side of Somerset Reservoir and the Valley Trail in Wilmington at the end of Forbush Road.

"The completion of the Somerset project final environmental assessment is the culmination of over four years of field inventory and resource analysis conducted by Forest Service staff working closely with the public throughout the process," Francomb wrote.

Project documents can be viewed at fs.usda.gov/project/?project=53706.