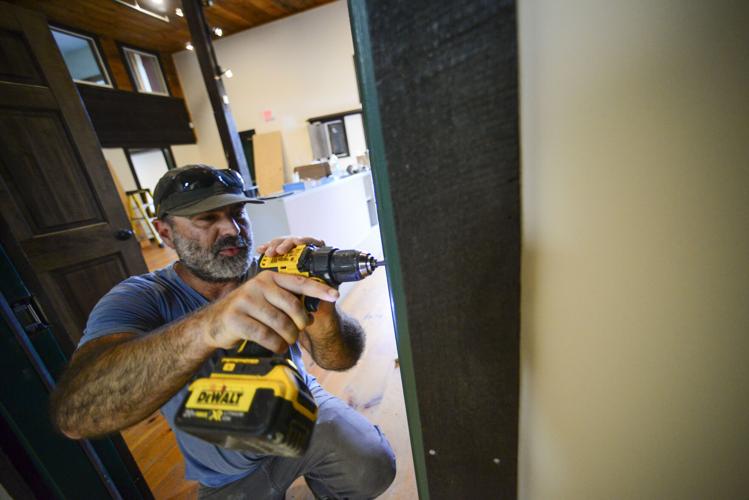 Adam North, a carpenter for Delta Vermont, helps install some of the security features at the Vermont Bud Barn in Brattleboro. 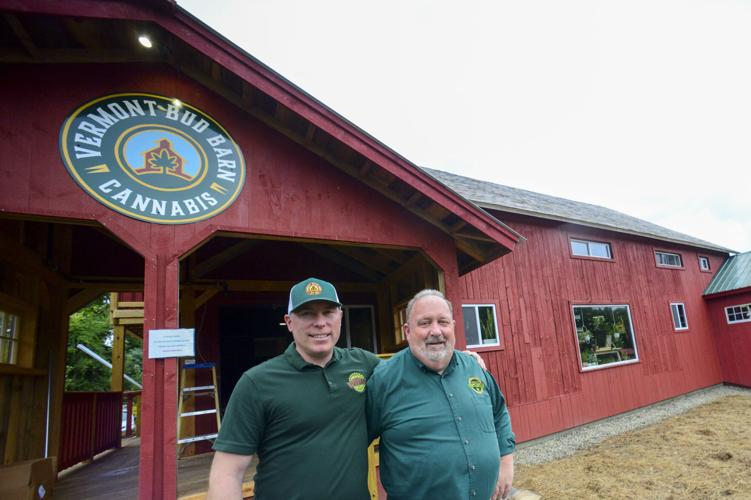 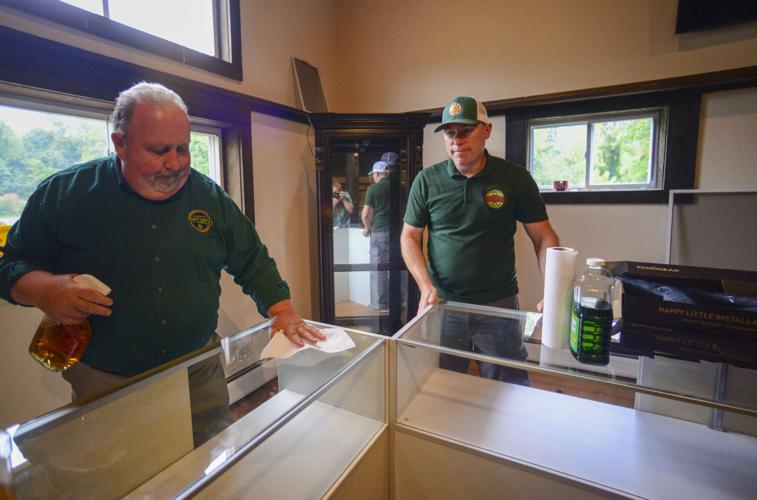 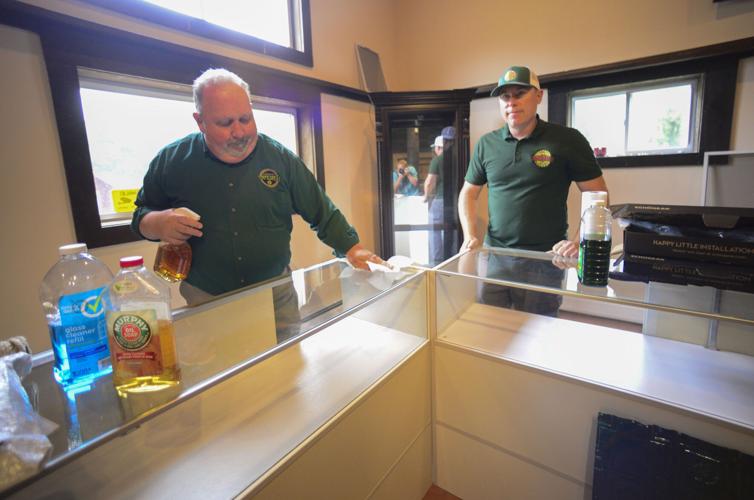 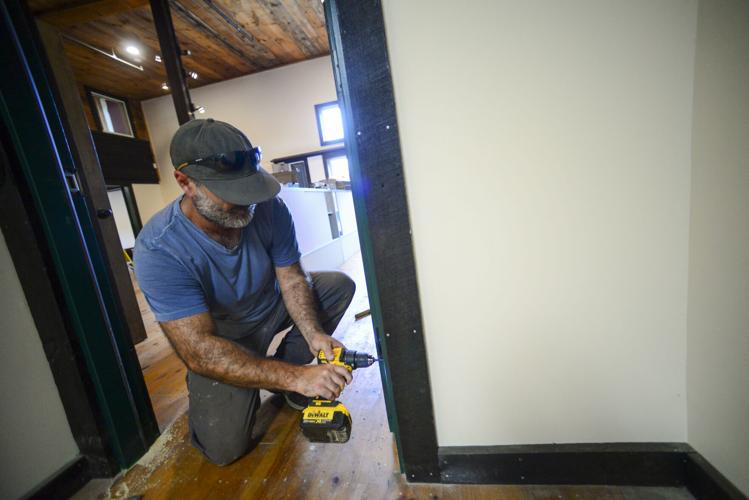 Adam North, a carpenter for Delta Vermont, helps install some of the security features at the Vermont Bud Barn. 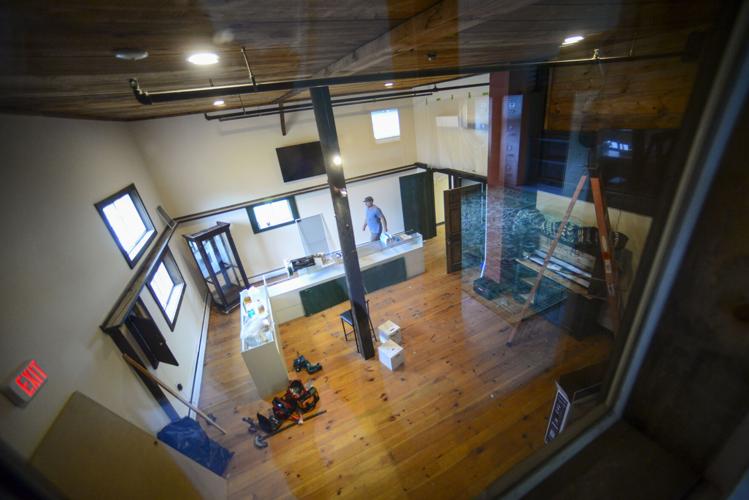 The Vermont Bud Barn in Brattleboro.

Adam North, a carpenter for Delta Vermont, helps install some of the security features at the Vermont Bud Barn in Brattleboro.

Adam North, a carpenter for Delta Vermont, helps install some of the security features at the Vermont Bud Barn.

The Vermont Bud Barn in Brattleboro.

With cannabis set to be sold in retail spots around Vermont next month, licenses will soon be going out.

“Early October definitely remains our goal,” Nellie Marvel, outreach and education manager for the Vermont Cannabis Control Board, said in an interview Thursday. “We have begun review of retail applications. We have a number of applications that are looking good, and we might be able to take action on them soon, but licensing retail outlets is complicated. It’s certainly our most complicated license type that we offer.”

So far, 47 retail applicants have been prequalified. However, Marvel noted, they’re not guaranteed to be licensed. At the time of the interview, 21 applicants from the prequalified list submitted their final licensing applications.

Vermont has licensed 223 entities — 217 are cultivators and the others include three manufacturers, a wholesaler and two testing labs.

Marvel said she can’t say where the first cannabis retailers might pop up in Vermont.

“We have a few that are nearing completion,” she said of license applications. “But I can’t unfortunately disclose right now where they might be.”

Scott Sparks, founder of Vermont Hempicurean and Vermont Grow Barn in West Brattleboro, is waiting to get his license to sell cannabis at what will be called Vermont Bud Barn. He’s already been prequalified.

Candidates who are Black or Hispanic, or have been arrested for cannabis-related crimes will be prioritized as “social equity applicants.” Since Sparks fits neither group, he said, “I’m bottom of the pack.”

Once he secures a license, he expects to be up and running in four to seven days.

“I can’t buy any product until I have a license, then I need to train staff on the product,” he said. “By the time I have that all together and everything into the software, it will take me a few days.”

Sparks anticipates a need for 12 employees, or bud tenders, to sell the cannabis. He recently started the interview process.

Within three days of advertising the jobs on Indeed.com, he received more than 150 applications and took the ad off the job site. He also used Front Porch Forum to find candidates.

Construction in the Bud Barn is nearly complete, Sparks said. He described how the project includes a “beautiful new vestibule,” a new entrance way, a cabinet system and getting electricity inside.

Sparks said he expects cannabis to bring in far more revenue than the hemp and CBD products he sells. Between all his businesses, he has invested about $200,000 since opening in 2018.

His ultimate goal when opening Vermont Hempicurean was to enter the retail cannabis market.

“This was far ahead on the horizon, and here we are,” he said.

Since the beginning, because hemp is federally illegal, he has experienced challenges with banking. He said he recently encountered an issue with Vermont State Employees Credit Union, which had been one of the only banks willing to accept cannabis businesses.

“A month before everyone was opening, they basically said, ‘We’re not going to open any accounts,’” he said, as the credit union put a temporary pause on cannabis business accounts.

At the time of the interview, Sparks had plans to use a virtual bank. However, just hours before, he received an attractive offer from Brattleboro Savings & Loan, which he’d been waiting to hear from as it was still working out details.

Sparks said he needed to provide the banking information to the Cannabis Control Board with his license application, so he “went with a virtual bank for that.”

Marvel said the licensing process is complicated, as it involves several jurisdictions such as fire safety, the Department of Taxes, local municipal issues and background checks.

“There’s a lot that goes into these applications that aren’t necessarily in the board’s purview nor do we have control over it,” she said. “But we’re doing the best we can.”

After licensing, Marvel said, “we’re likely going to be seeing some supply chain issues for the first little bit as the market works to stabilize itself.”

“There’s going to be bottlenecks in production, in testing,” she said, noting how retailers can’t get cannabis from out of state. “With cannabis being federally illegal, there are a lot of hoops that need to be jumped through. Cannabis is not tomatoes. They’re very different plants with very different issues that surround them.”

Marvel said the board has a responsibility to ensure that every licensee is “appropriate for licensure, that they’re not going to endanger public safety or consumer safety. That is absolutely something that the board takes very, very seriously.”