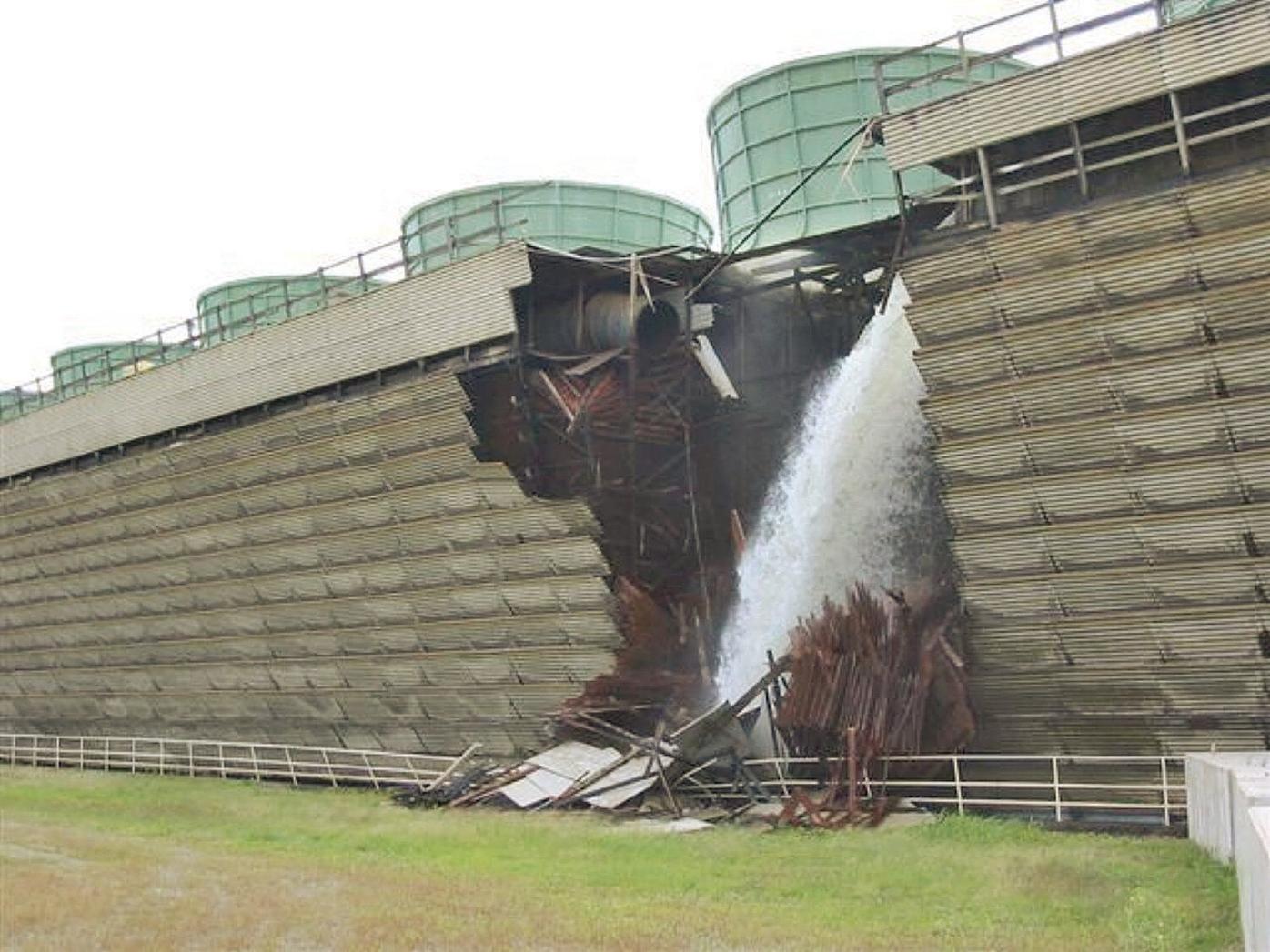 Water spills out of a cooling tower at the Vermont Yankee nuclear plant in Vernon, Vt., on Aug. 21, 2007. The old cooling towers will soon be demolished as part of the decommissioning of the plant. 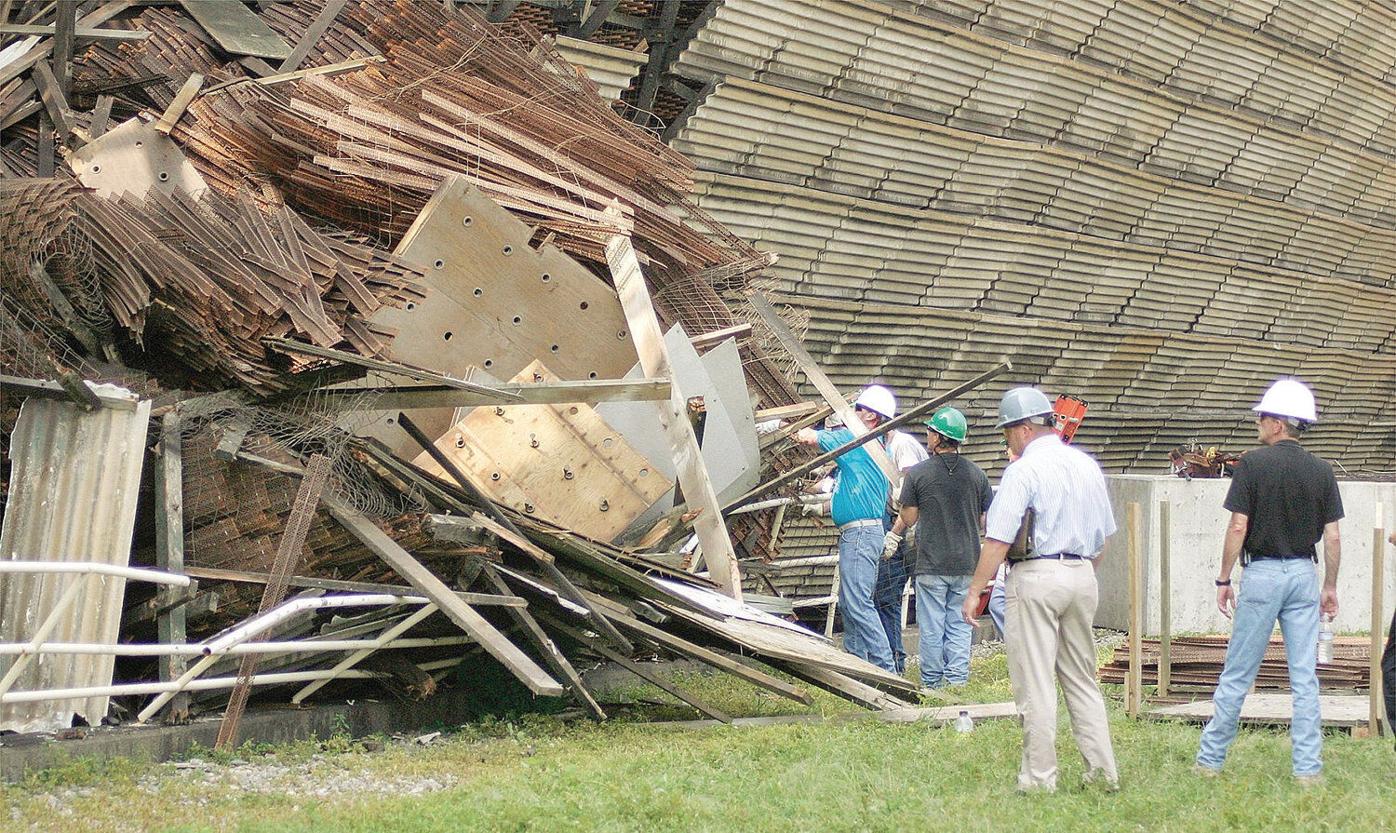 Workers sift through the rubble of one of the two cooling cells at Entergy Vermont Yankee in August, 2007.

Water spills out of a cooling tower at the Vermont Yankee nuclear plant in Vernon, Vt., on Aug. 21, 2007. The old cooling towers will soon be demolished as part of the decommissioning of the plant.

Workers sift through the rubble of one of the two cooling cells at Entergy Vermont Yankee in August, 2007.

VERNON — They once gave Entergy Nuclear a giant public relations headache. But soon Vermont Yankee's old cooling towers will be demolished, a NorthStar executive said Monday, as decommissioning at the Vernon nuclear plant gets underway.

Corey Daniels, a former Entergy Nuclear decommissioning manager who now works for the new owner of the closed nuclear plant, told members of the Vermont Nuclear Decommissioning Citizens Advisory Panel that the cooling towers would be likely gone before the panel's next meeting, which is slated for September.

Daniels said asbestos abatement at the cooling towers was in process, and once completed, the demolition would begin. He gave the panel an update on the first four months of NorthStar's ownership and the demolition schedule at Vermont Yankee.

The partial collapse of one of the cooling towers in August 2007 - and a leaked photograph of the damaged towers to anti-nuclear groups - sparked renewed calls by environmentalists for the Vernon plant to be shut down and earned the plant a raft of unwelcome national press and political attention. The partial collapse, which forced Vermont Yankee to reduce power but was not considered a safety problem by the Nuclear Regulatory Commission, was eventually blamed on poor maintenance and inspection by Entergy. Unlike many nuclear plants, Vermont Yankee's cooling towers were made up of two banks of largely wooden cooling cells, unlike the huge, parabolic concrete towers associated with Three Mile Island. But the infamous photographs brought increased state and federal scrutiny to Vermont Yankee.

The cooling towers ultimately played no role in Entergy Nuclear's decision to shutter Vermont Yankee in 2014; the company cited economics fueled by the low price of natural gas.

NorthStar, a New York City industrial demolition company, bought Vermont Yankee from Entergy in January, and it has plans to complete the demolition by 2026, decades ahead of a long-term schedule endorsed by Entergy.

Daniels said that since January, NorthStar has completed many projects at the Vernon site, including demolition of the construction office building, the construction of a new rail spur, and the clean out of the spent fuel pool to prepare it for use during the decommissioning process. But most importantly, the demolition of the reactor core is starting, he said, noting that key components are being cut up in smaller pieces and placed in special boxes - which looked bigger than a compact car.

"The big work that is coming up is segmentation work," he said, noting that he was giving the panel of local officials, state regulators and legislators the view "at 10,000 feet" of the decommissioning work. Orano, another one of NorthStar's partners, is leading the reactor core work, and has devised specialized underwater cutting equipment. Most of the key radioactive components will be shipped to Texas, where the state of Vermont has long had a share in a low-level radioactive waste facility, now owned by one of NorthStar's business partners.

Allison Wannop, special counsel for the Vermont Department of Public Service, said that so far nothing was overbudget in NorthStar's decommissioning. She said the state had recently received audited financial reports from both NorthStar Group Holdings and NorthStar Group Services.

She said the state is in the process of ramping up its oversight role, and is in the process of hiring its consultant for the decommissioning. She said the state had reissued its request for proposals after only receiving four responses, and now officials are evaluating 13 responses from firms. And Wannop said the decommissioning trust fund is currently at about $528 million, with the site restoration fund at $60 million.