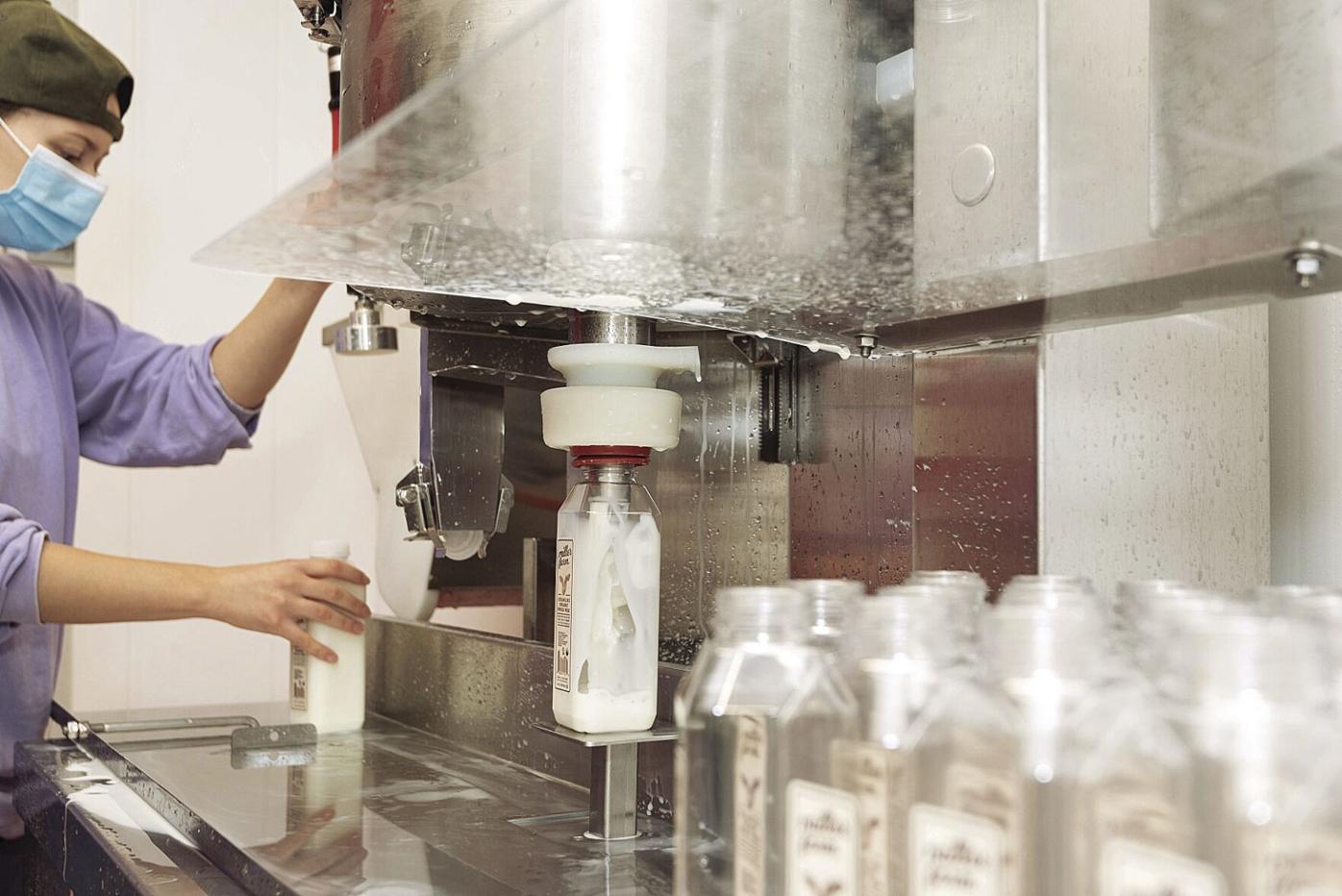 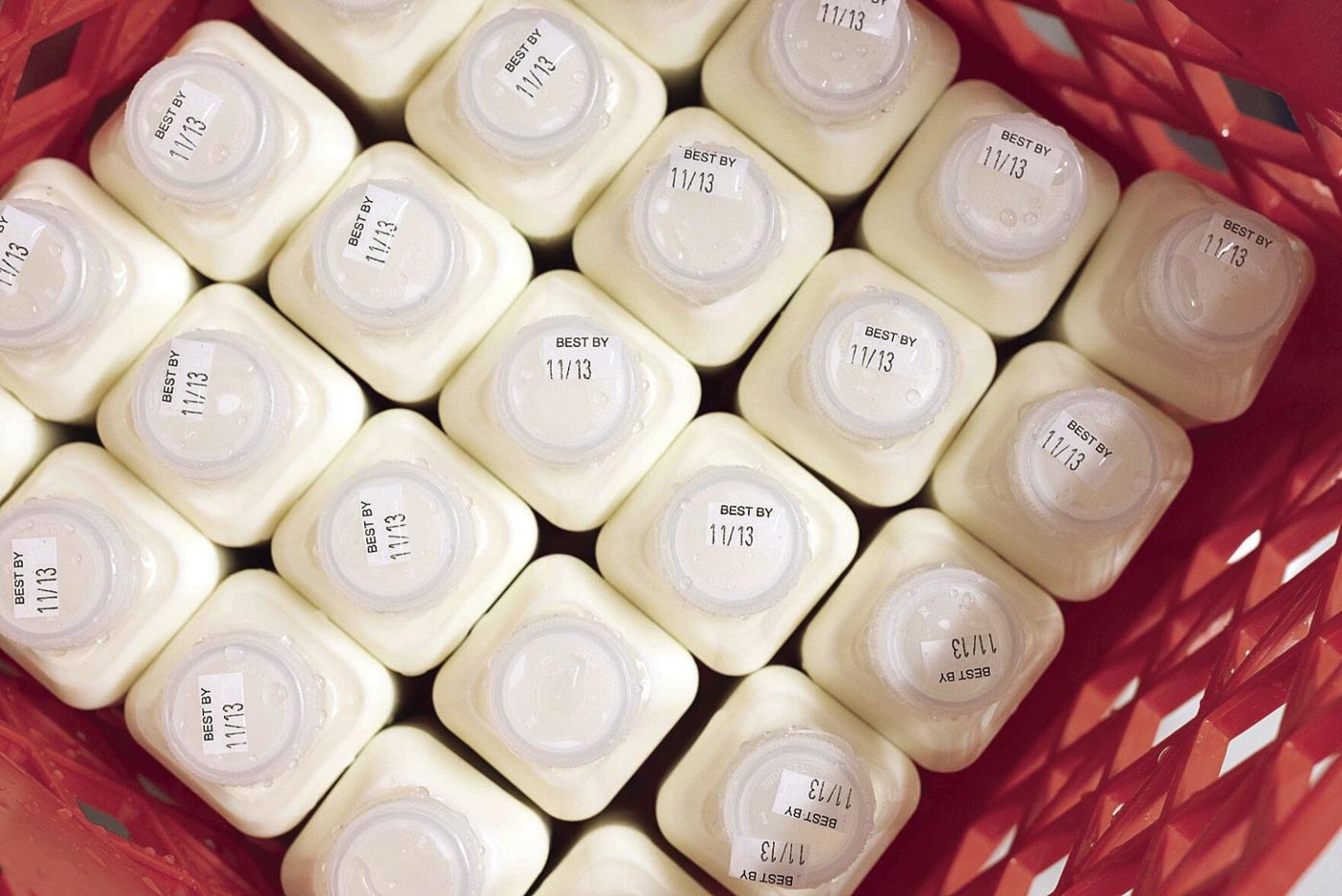 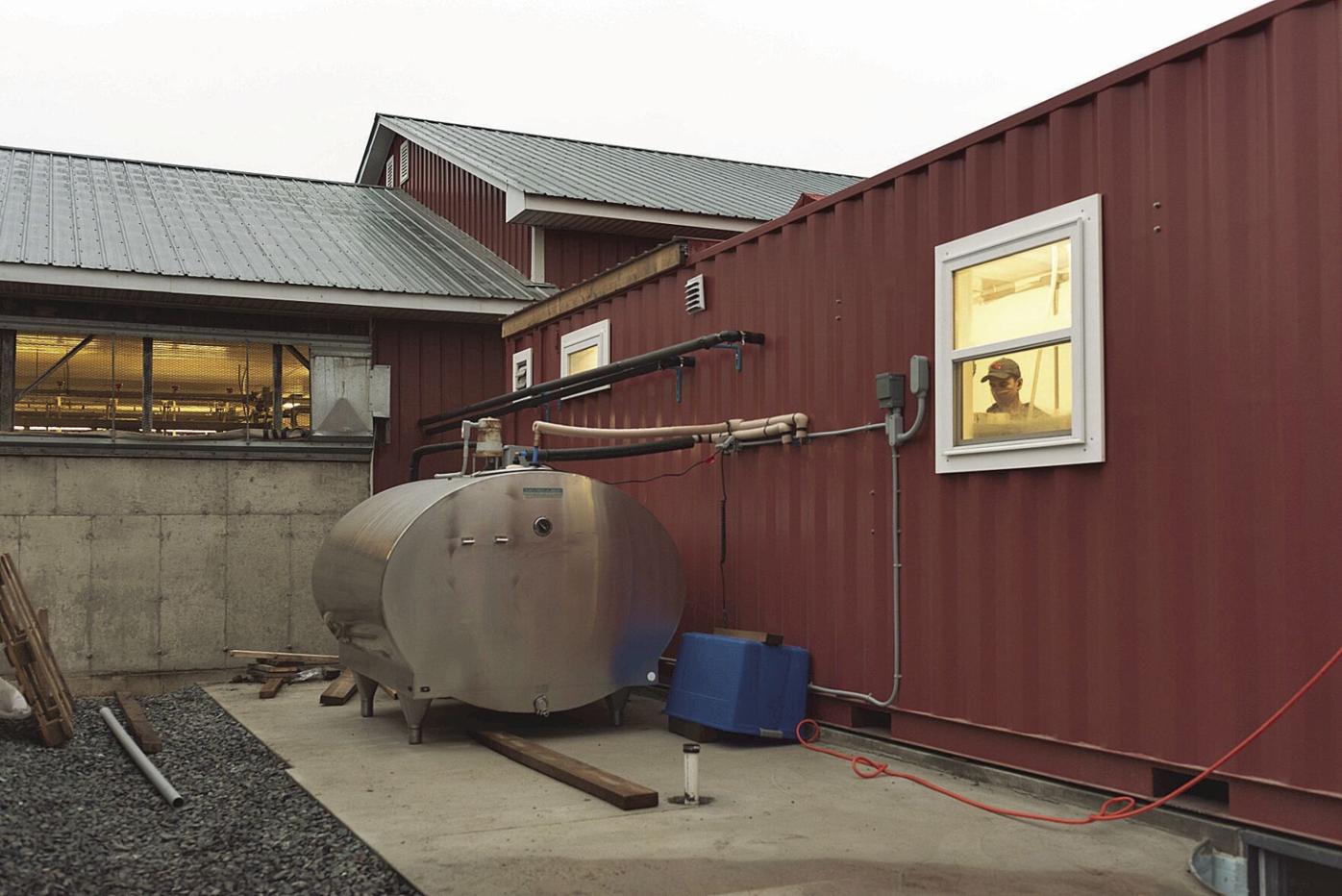 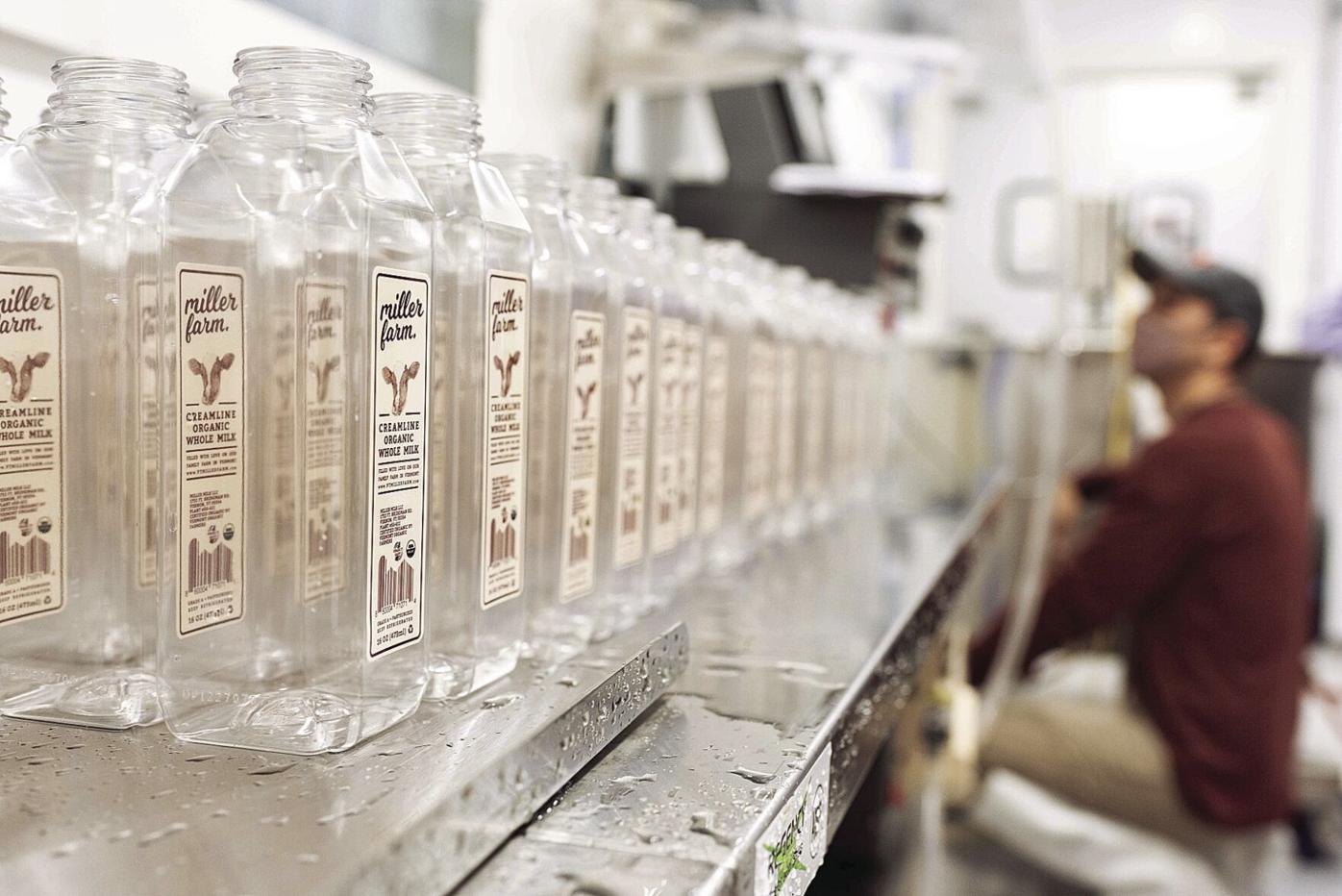 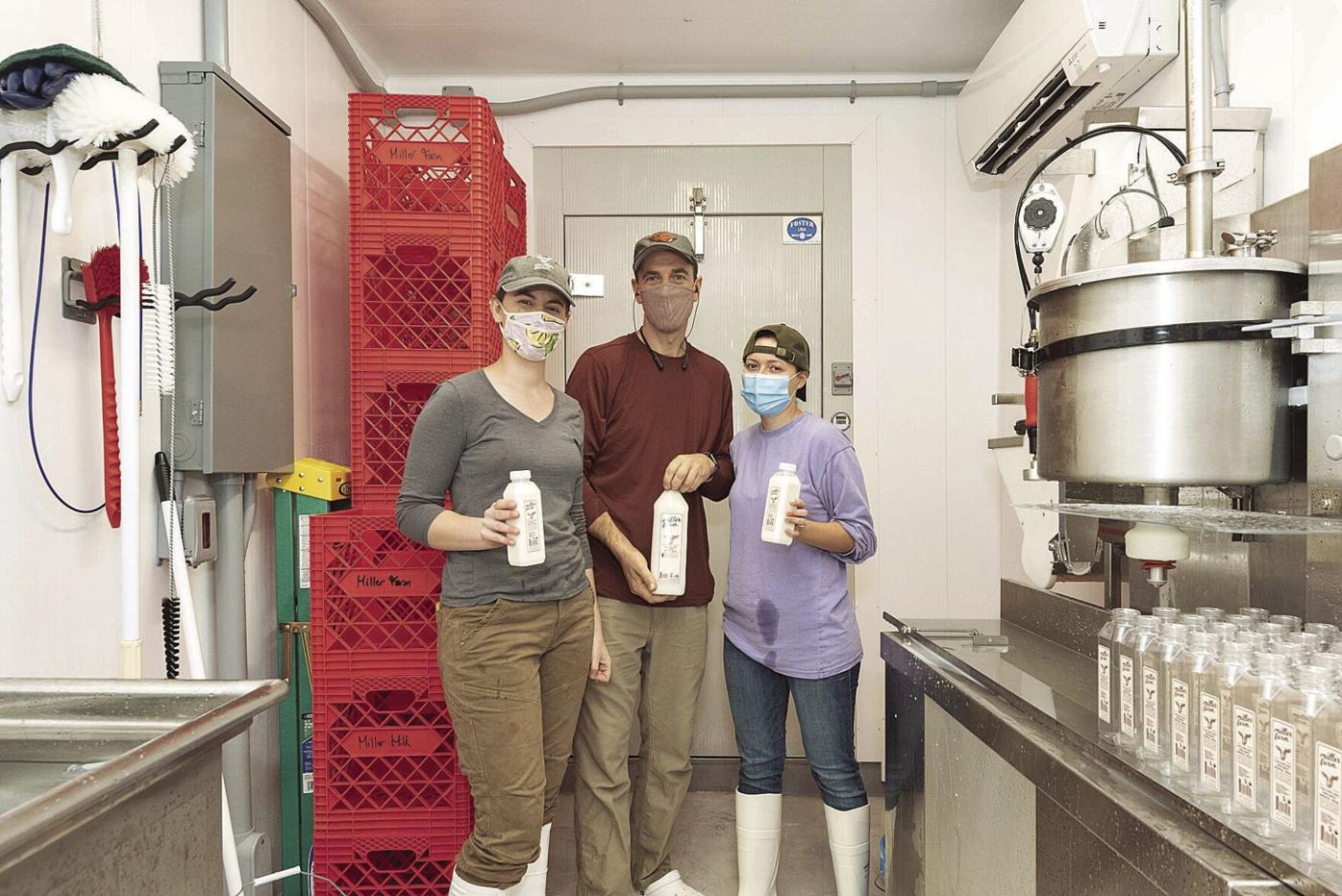 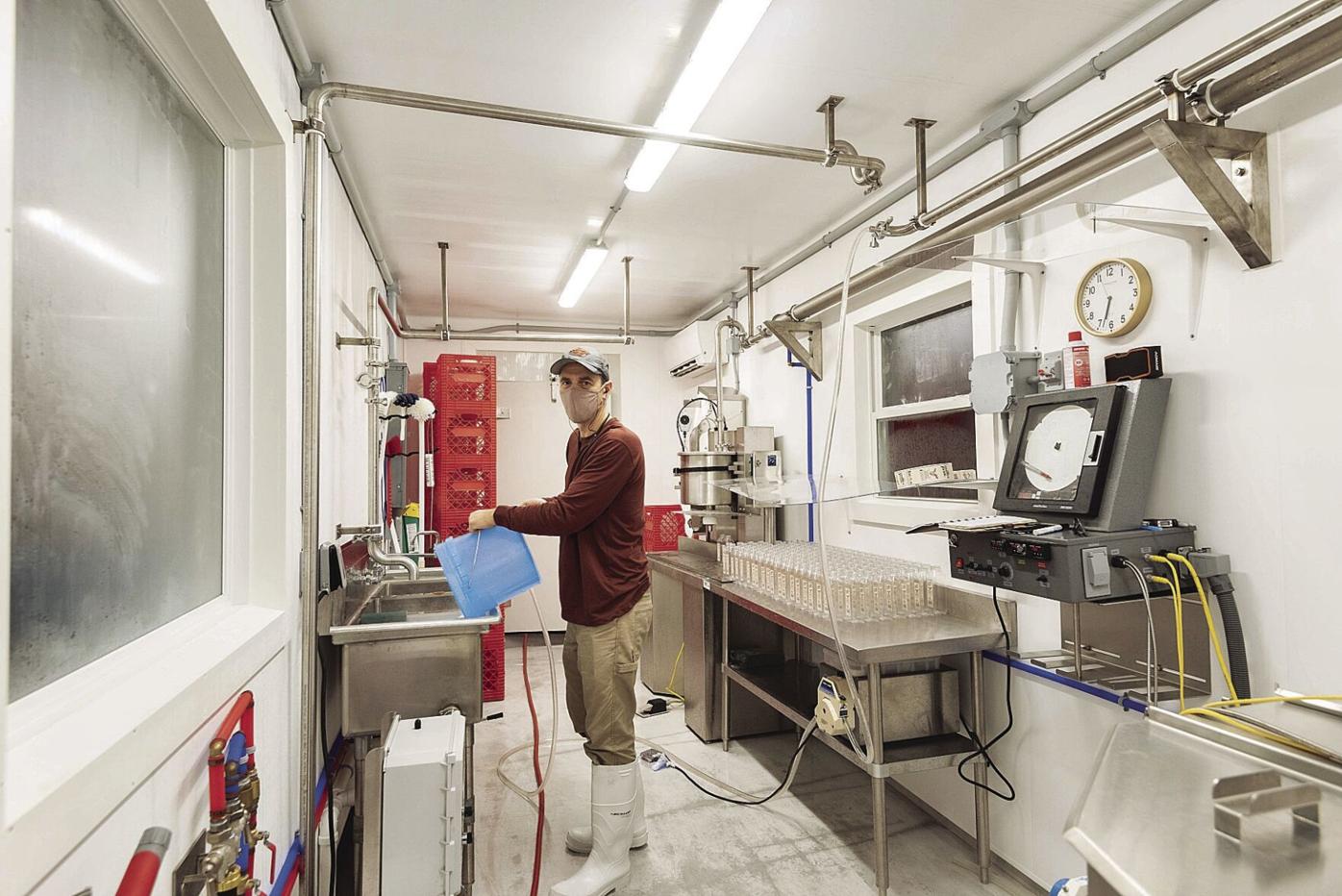 Peter Miller in the newly acquired pasteurization and bottling space at Miller Farm in Vernon. 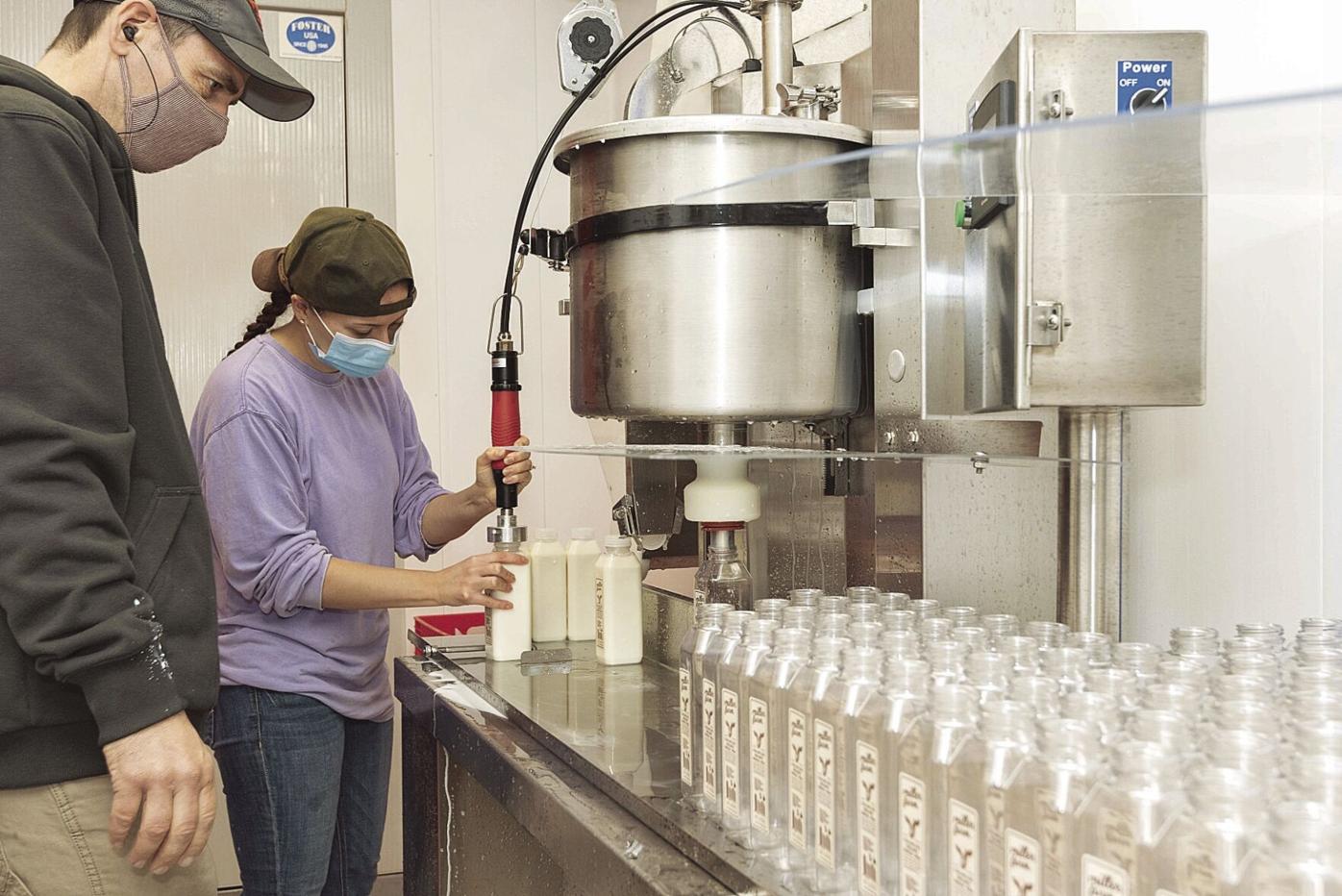 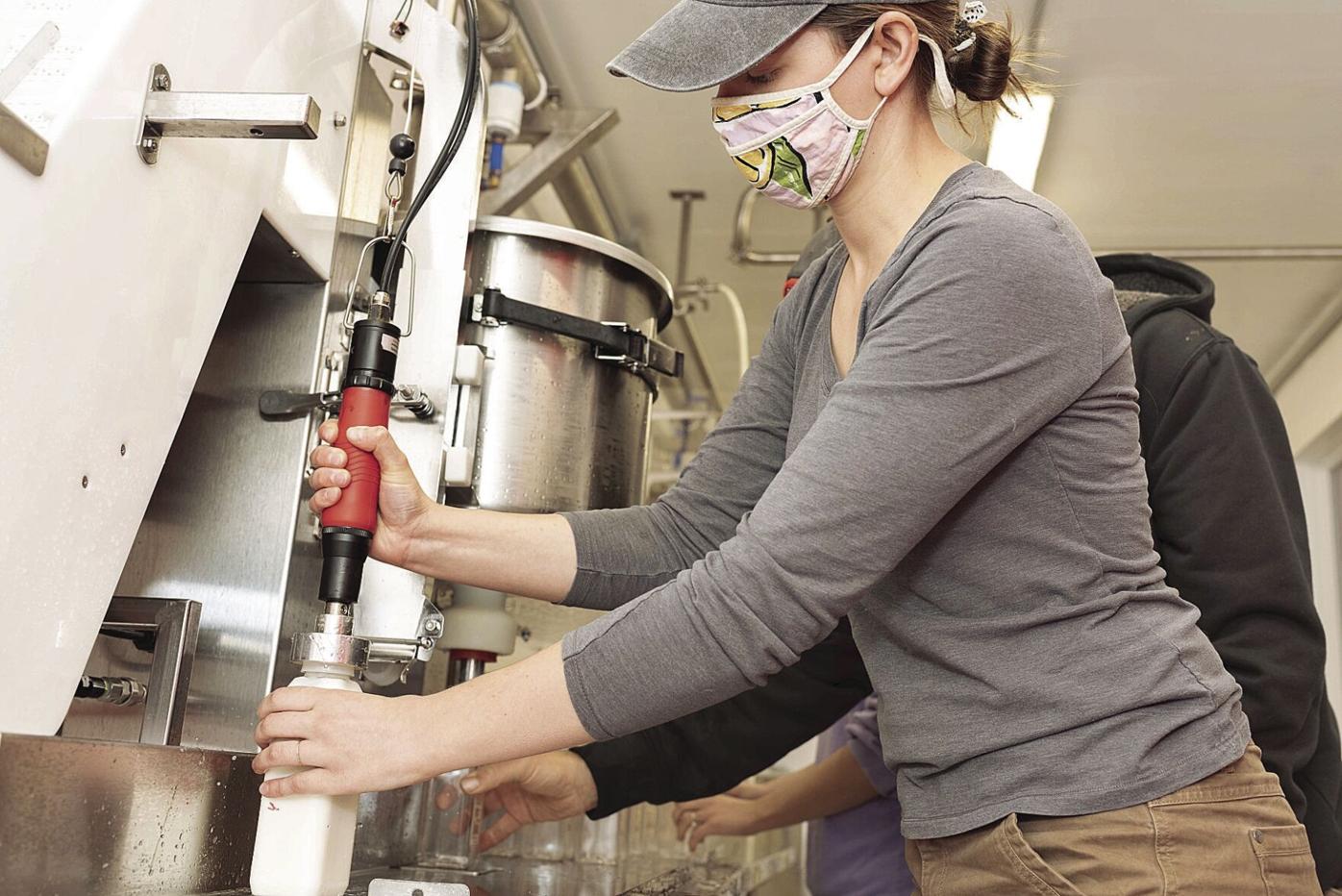 KELLY FLETCHER — REFORMER CORRESPONDENT Abigail Miller helps fill and cap milk bottles at Miller Farm in Vernon. When she’s not helping out at her family’s farm, she works as an OR nurse at Brattleboro Memorial Hospital. 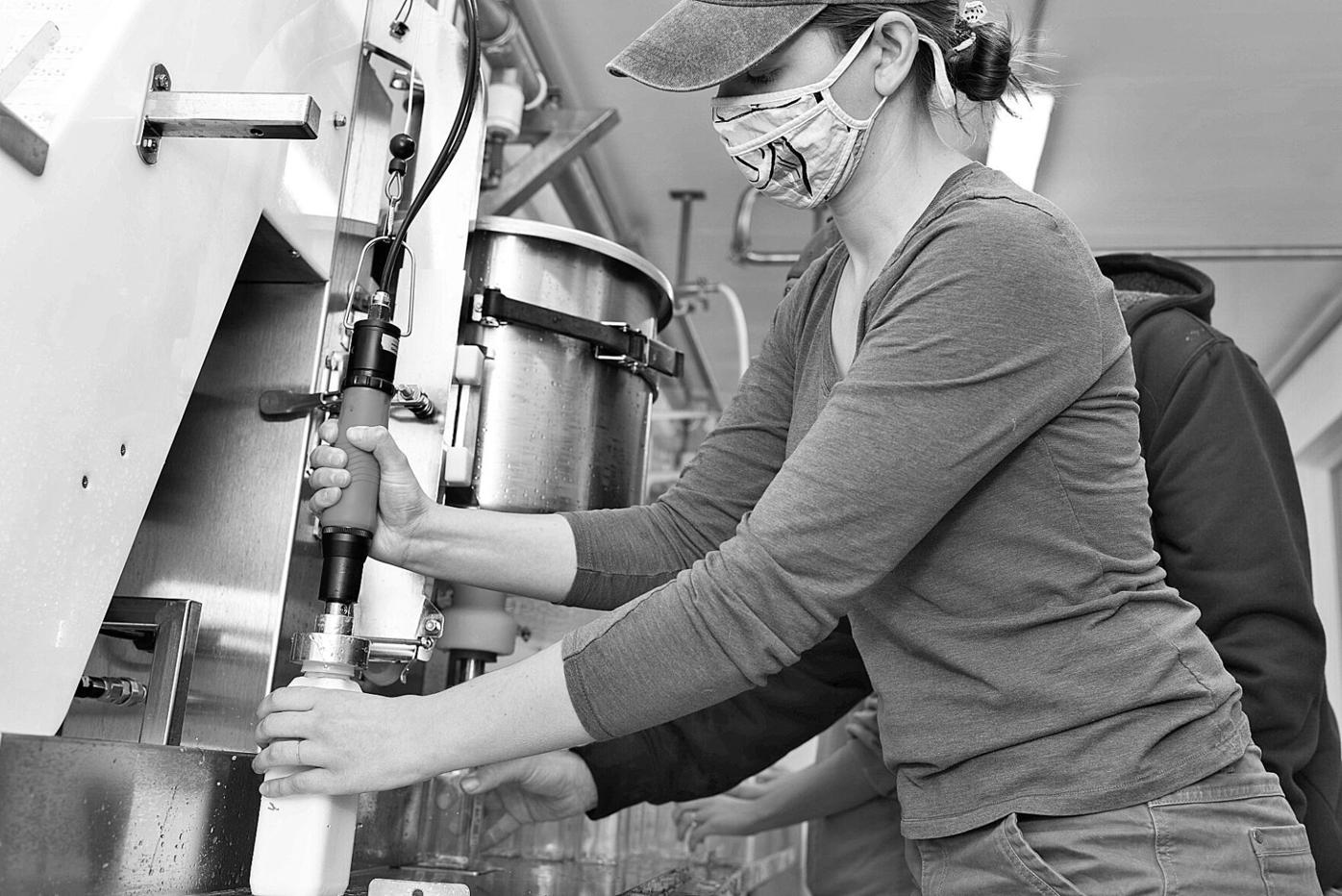 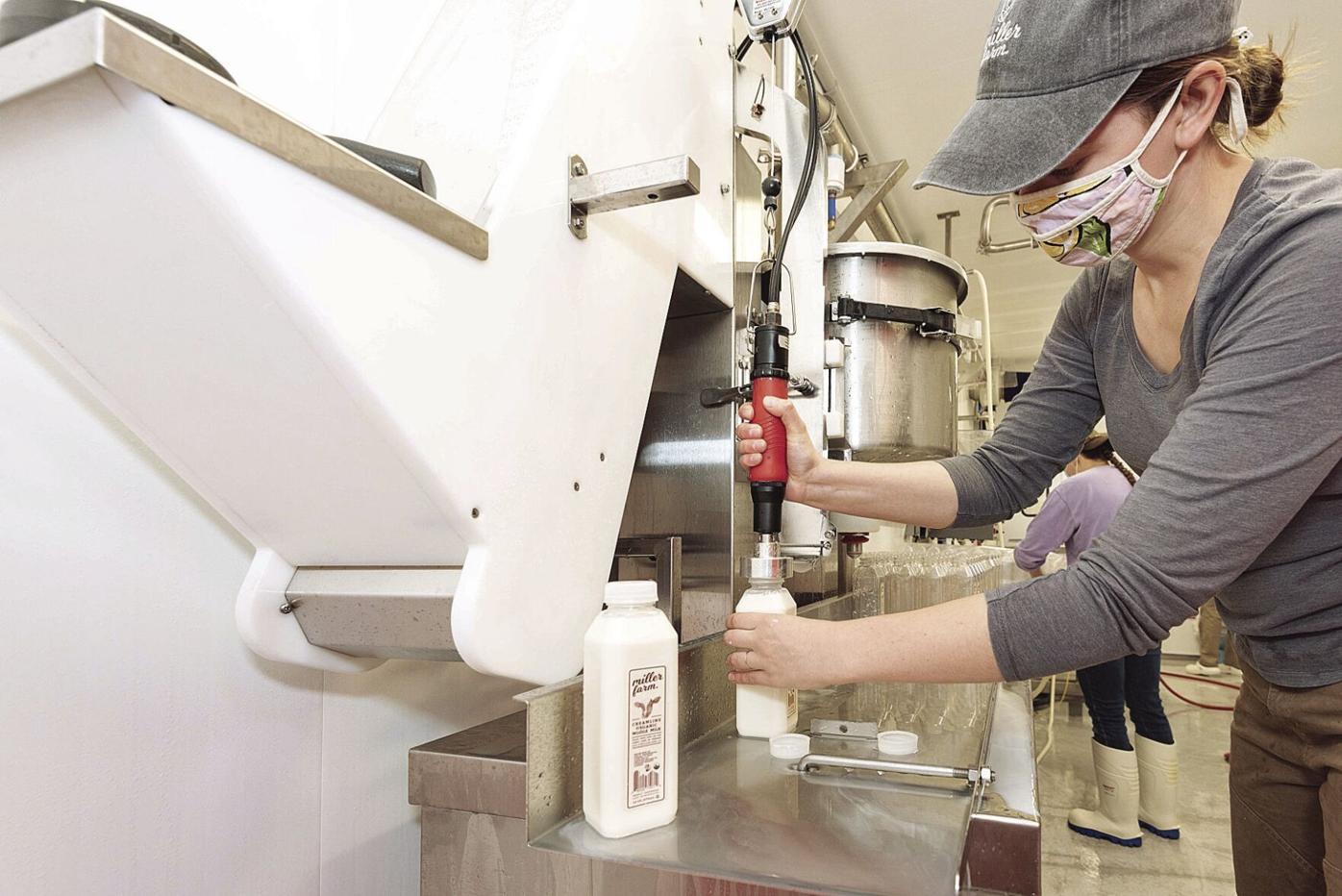 Peter Miller in the newly acquired pasteurization and bottling space at Miller Farm in Vernon.

KELLY FLETCHER — REFORMER CORRESPONDENT Abigail Miller helps fill and cap milk bottles at Miller Farm in Vernon. When she’s not helping out at her family’s farm, she works as an OR nurse at Brattleboro Memorial Hospital.

VERNON — For 104 years, the Miller family has been dairy farming at the crossroads of Fort Bridgman Road, Governor Hunt Road and the New England Central Railroad.

And while technology and consumer tastes have changed over the past century, one thing has stayed constant — the desire for healthy, fresh, local milk.

“It’s been a while since we sold milk off the farm,” said Peter Miller, who, with his business partners — his wife, Angela, his brother Arthur and his wife, Judy, and Keith and Tina Franklin — milk 175 Holstein cows.

While Miller Farm sells most of its 1,500 gallons of organic milk to Stonyfield Yogurt, it is now setting aside up to 100 gallons a day for local sale.

“The price that Stonyfield gives us is a good price,” said Peter Miller. “However, we have seen three price decreases in about 18 months. That really galvanized our interest in doing something that could stabilize our income.”

Miller said despite the drop in price, Stonyfield has been a lifeline for dairy farms in New England and upstate New York.

“They are providing a tremendous service to us,” he said. “I don’t know of any other milk supplier that would allow us to divert milk for local sale. That is a great kindness.”

For a time, Miller Farm sold its product to Agri-Mark, which uses conventional milk from its suppliers to produce Cabot and McCadam cheeses.

“They were good to us,” said Miller. “But we’ve been organic so long [since 2009], the relationship is getting further and further in the rear-view mirror.”

With the help of a Coronavirus Food Assistance Program grant from the federal government and an assistance grant from the Vermont Department of Agriculture, Miller Farm was able to purchase pasteurization equipment and get it hooked up at the farm.

“The reception has been extremely warm and encouraging,” said Miller. “These places are starving for a local product. This whole thing is flying because of the huge support we are getting from these little stores and the co-ops.”

That’s especially true since the closure of Rutland’s Thomas Dairy on Oct. 1.

“Retailers want a full spectrum of products to replace those lost due to the closure,” said Miller, who, for now, is not providing products such as half and half.

“We’re only about a week into this,” said Miller.

However, he said, because the farm’s milk is not homogenized — a process reduces the size of the fat globules, or the cream that rises to the top of the container, into smaller portions that are dispersed evenly throughout the milk — the cream rises to the top.

“You can either shake it up or pour the cream off into your coffee or even drink it before anyone else in the house gets to it,” said Miller. “We actually put a label on our containers that say ‘Shake it, baby.’”

The next step for Miller Farm is to expand into smaller sizes, such as a 16-ounce container, he said.

“Those should be available in stores this week. After that, we plan on maple milk, but we are just waiting on the labels. That will probably be a couple of weeks. And then chocolate milk will be after that.”

Miller Farm will not be offering raw milk, however, said Miller, who drinks it that way.

“We’ve dabbled a bit in raw milk, but the regulations are a little too much, though they are prudent,” he said.

Right now, Miller Farm can’t sell its products across state lines, but that should change in a couple of weeks, said Miller.

“We do intend to sell in Massachusetts and New Hampshire,” he said.

Folks can also purchase milk right at the farm, said Miller, where they have set up a small refrigerator for self-service customers who can pick up liters for $4. Pints are available, too, he said.

The milk is being sold by Miller Milk, a collaboration between Miller Farm, Inc., and Miller’s daughter, Abigail and her husband, Brandon Bucossi.

“They’ve invested in the dairy processing business,” said Miller. “They represent the next generation on the farm.”

What is now the Miller Farm was originally part of the extensive estate of Jonathan Hunt, Vermont’s lieutenant governor from 1794 to 1796. Over the years, the land passed through various hands before being purchased from Harold Akley in 1916 by Arthur Lyman Miller, great-grandfather of the current generation of Millers running the farm.

Arthur Miller was born in Dummerston and got his start at Walker Farm, where Captain Issac Miller first started farming in the early 1770s. In 1835, the farm changed hands when it was purchased by Abial A. Walker, from Westmoreland, N.H., and his wife, Sabrina Briggs.

It is now operated by Jack Walker Mannix and his wife, Karen.

In 1969, J. Maynard and Marjorie Miller transferred ownership of the Vernon farm to Paul and Mary Miller and in 1998, the farm was transferred to the current generation.

Today, there are five full-time people working the farm along with part-time, seasonal workers and a handful of volunteers.

“We have several people who volunteer their time here,” said Miller. “We are extremely grateful for that support.”

In return, the volunteers often get a container of milk to bring home.

“This place has a community feel to it,” said Miller, who is also grateful to fellow dairy farmers for their insight and advice, including Sam Canonica and Sarah Costa, of Manning Hill Farm in Winchester, N.H., whose milk can be found in stores such as Hannaford in Keene, N.H.

“Sam has been very helpful in helping us to understand the market,” said Miller.

Miller said this type of collaboration helps ensure the viability of local food producers who are adapting to uncertain times, such as a pandemic.

“We have huge vulnerabilities in our national food infrastructure,” said Miller, which were laid bare when the COVID-19 pandemic resulted in the closure of meat packing plants and other food production facilities. “Having local food producers and distributors really seems to make sense for our regional food security.”