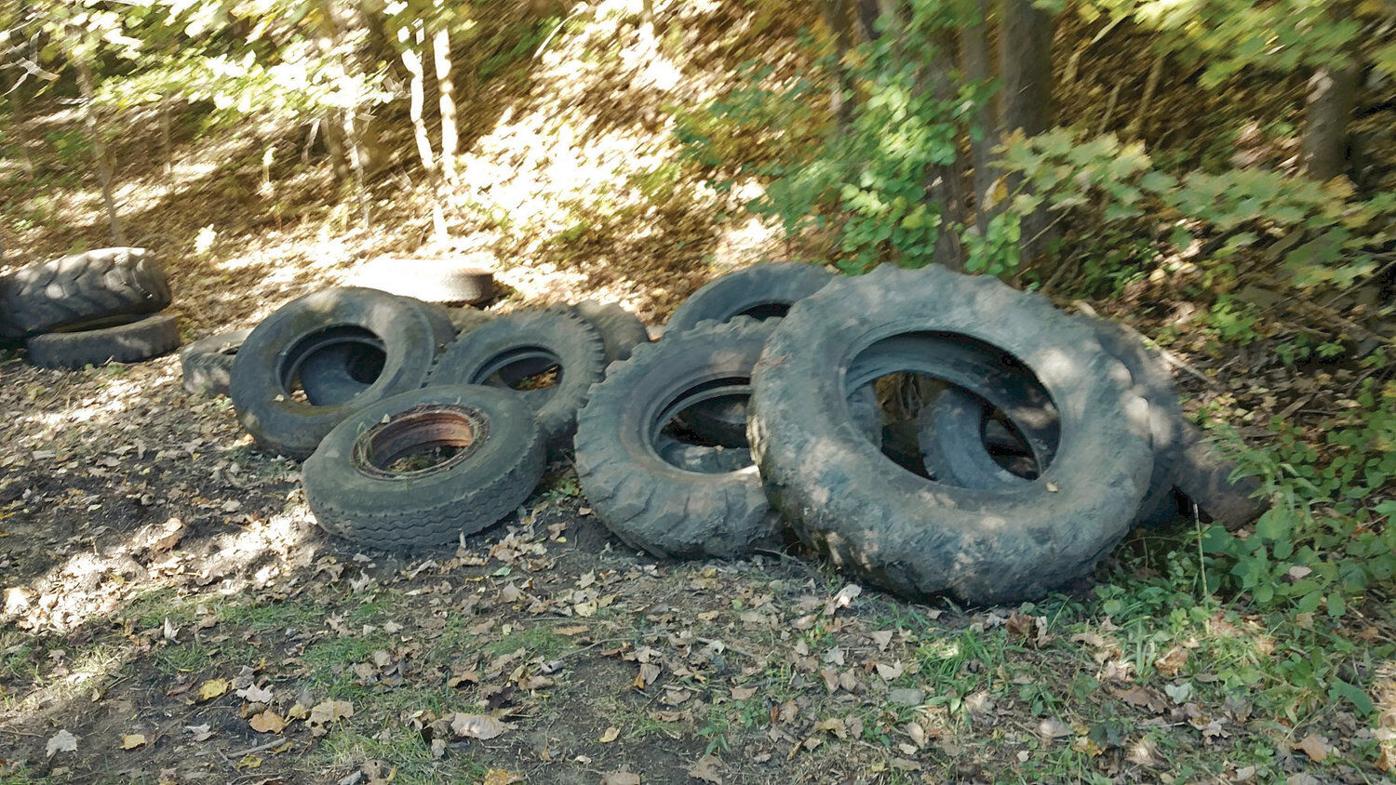 These truck tires were pulled from a marsh near Spring Tree Road in Brattleboro by volunteers with the 22nd Annual Source to Sea River Cleanup organized by the Connecticut River Watershed Council. 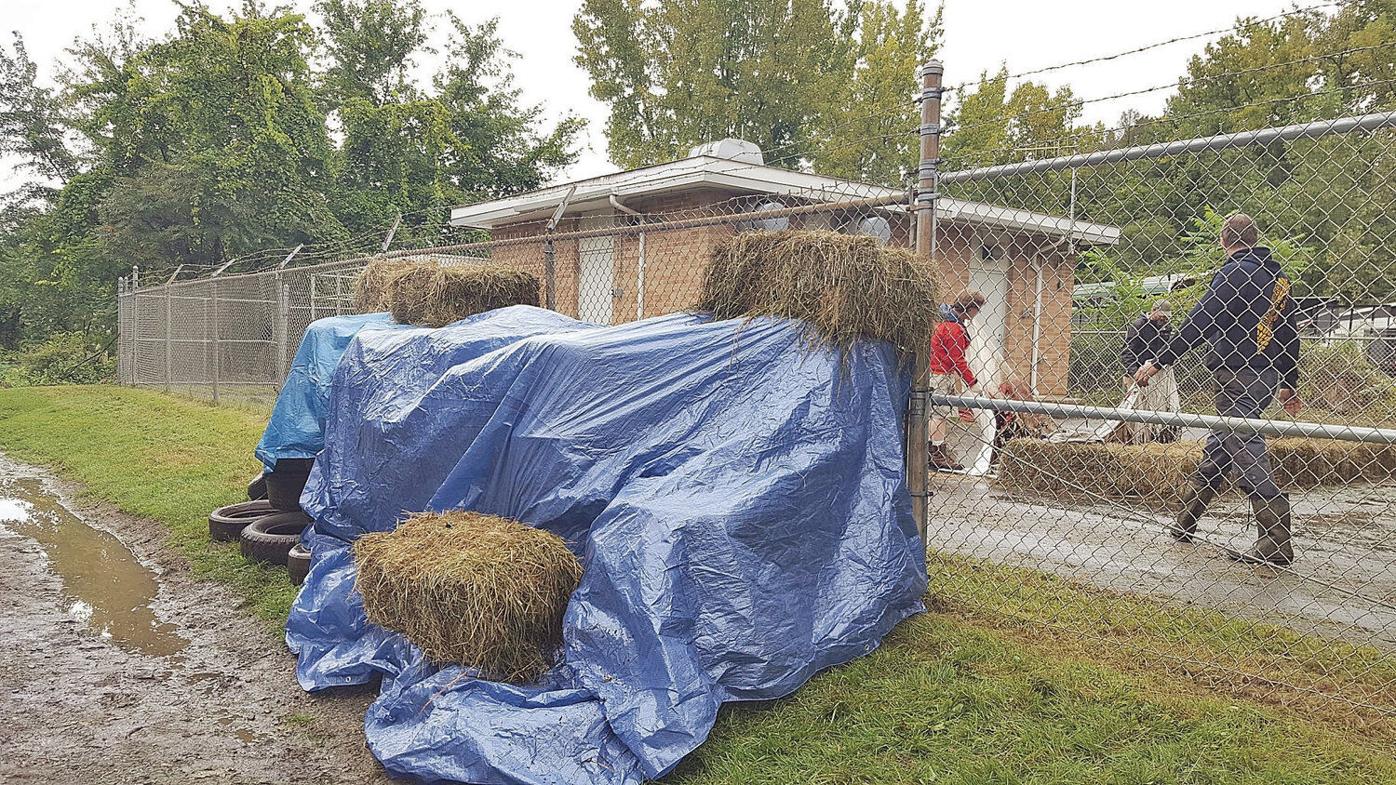 Volunteers pulled more than 100 tires out of a wetland on Spring Tree Road. 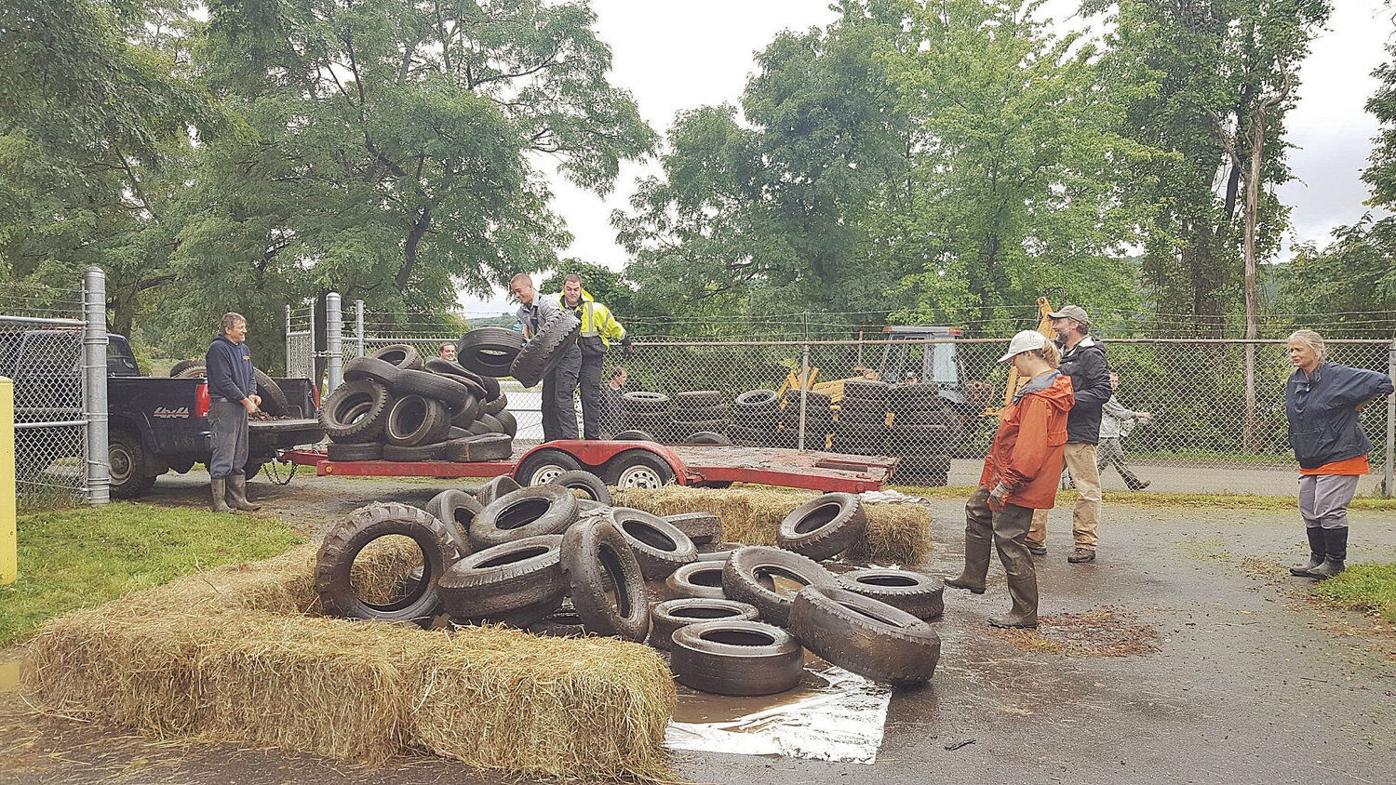 Tires are hosed down before being picked up for recycling. 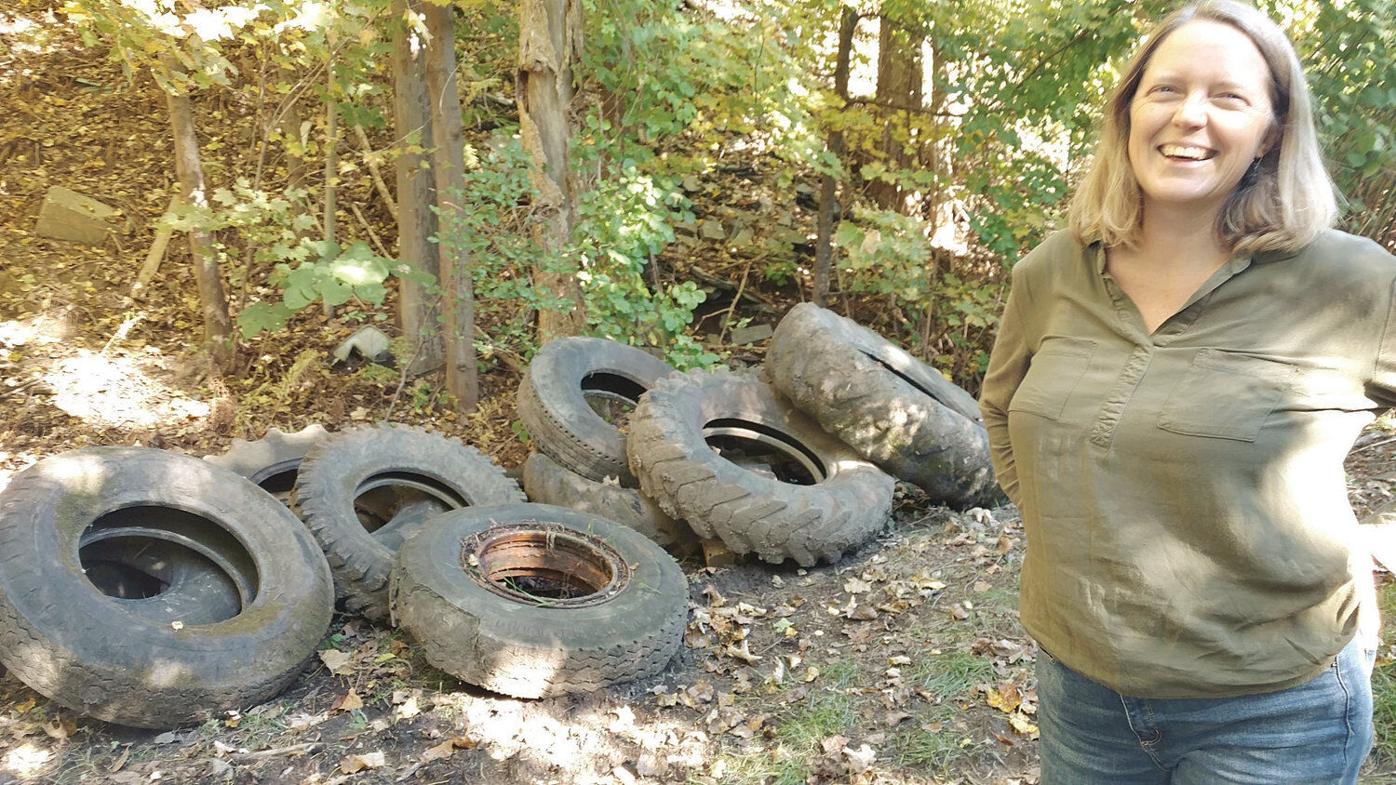 Kathy Urffer, the Connecticut River Watershed Council's River Steward for Vermont and New Hampshire, stands next to truck tires that were pulled from a marsh near Spring Tree Road. 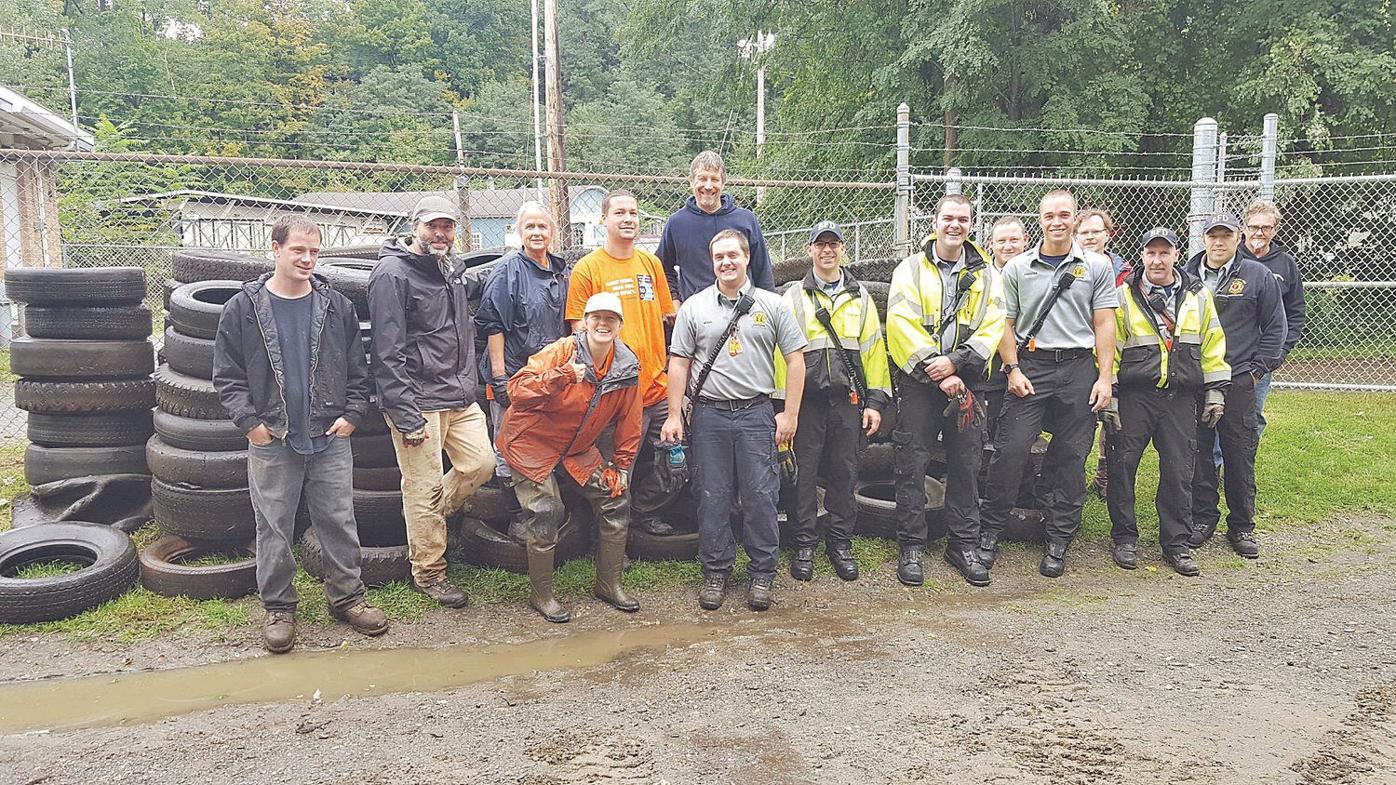 Volunteers donned muck boots and hip waders to pull tires out of a local wetland as part of the Connecticut River Conservancy's 22nd annual Source to Sea Cleanup.

These truck tires were pulled from a marsh near Spring Tree Road in Brattleboro by volunteers with the 22nd Annual Source to Sea River Cleanup organized by the Connecticut River Watershed Council.

Volunteers pulled more than 100 tires out of a wetland on Spring Tree Road.

Tires are hosed down before being picked up for recycling.

Kathy Urffer, the Connecticut River Watershed Council's River Steward for Vermont and New Hampshire, stands next to truck tires that were pulled from a marsh near Spring Tree Road.

Volunteers donned muck boots and hip waders to pull tires out of a local wetland as part of the Connecticut River Conservancy's 22nd annual Source to Sea Cleanup.

BRATTLEBORO — On Friday, Sept. 28, and Saturday, Sept. 29, nearly 20 volunteers came together to pull tires from a wetland on Spring Tree Road as part of the Connecticut River Conservancy's 22nd annual Source to Sea Cleanup.

"We pulled out about 135 tires," said Kathy Urffer, the CRC's River Steward for Vermont and New Hampshire. "All of those came out of the water."

All of the tires pulled out of the marsh dated before 2000, and many of them were deposited decades ago. Urffer believes that at one time, maybe the 1940s, there was a landfill on the site, and the bank above the marsh appears to be composed of mostly trash that has been overgrown by weeds and brush.

Teri Carter, a local artist, brought the tires to the attention of the town and the Connecticut River Conservancy in the spring.

"I've been walking here for years," said Carter in April. "Even before there was a West River Trail. I have always appreciated the wildlife that is here. It's heart-wrenching that this is being allowed to persist."

In early September, Carter learned that the marsh on Spring Tree Road would be a particular focus of the local Source to Sea Cleanup.

"I am thrilled," said she at the time. "I am so happy and so impressed how certain organizations have gotten together and organized volunteers and a strategy for removing as many tires as possible."

In total, more than 3,000 volunteers came together at more than 100 locations along the Connecticut River and its tributaries in New Hampshire, Vermont, Massachusetts and Connecticut the last weekend of September.

Volunteers outfitted with work gloves and trash bags got dirty and some got wet in their effort to remove approximately 50 tons of trash from in and along our rivers. In Brattleboro, the volunteers donned muck boots and hip waders to pull the tires out of the water. Dennis Smith, the owner of the Marina Restaurant, supplied a canoe, from which volunteers dropped ropes with hooks on the ends and Dan Dietz, the owner of Brattleboro Tire, supplied a truck to move the dredged tires to a cleaning area.

"The tires themselves are relatively benign," said Urffer. "But they look disgusting and it's obviously not the best use of old tires. And animals get stuck in them. A big part of the trash issue is the affect it has on wildlife."

The tires don't biodgrade, said Urffer, but there's no telling what's in the muck and decomposing materials that filled many of the tires. So, after the tires were dragged from the water, they were moved to a temporary cleaning station near the town's Spring Tree Sewage Pumping Station, where firefighters from the Brattleboro Fire Department hosed them out.

Urffer said the water from the cleanup was allowed to soak back into the ground, but the sludge and mud that remained was shoveled up and removed from the sight.

Most of the automobile tires that the volunteers removed from the marsh were taken away as part of Bridgestone's Tire4Ward program. "Since the Tires4ward program launched in 2012, Bridgestone has supported more than 450 community clean-up events and recycled almost 120,000 tires from rivers, streams and communities nationwide," states the Bridgestone website. According to UTires, recycled tires can be used as civil engineering materials and ground and railroad materials as well as tire-derived fuel.

Even though the marsh is not connected via surface water to the West River or the Connecticut River, said Urffer, they are all interconnected as part of the underground water table. She said water moves throughout the system as weather conditions change.

Urffer still has to find a disposal site for about a dozen truck tires that were pulled out of the marsh because Bridgestone only takes car tires, she said.

Final trash totals are still being tallied. Source to Sea Cleanup volunteers cleaned rivers from Stratford, N.H., near the Canadian border all the way to the mouth of the Connecticut River near the Long Island Sound in Old Saybrook, Conn. Volunteers turned out from faith communities, watershed groups, schools, community and youth organizations, and at least 25 businesses and employee service groups.

"Source to Sea Cleanup volunteers' hard work and dedication is inspiring and makes a real difference for our rivers," stated Stacey Lennard, CRC's cleanup coordinator. "But our work isn't done until we put ourselves out of the river clean-up business."

"We all have a responsibility to solve this problem — individuals, manufacturers, businesses, and government," said Andrew Fisk, CRC executive director. "After cleaning up over 1,000 tons of trash over the course of 22 years, it's clear that repeated cleaning is not the solution to our trash problem. We need to redesign our economy so there isn't waste in the first place."

"It's great to be able to take action that makes a difference," said Eversource President of Corporate Citizenship Rod Powell. "At Eversource we're always ready to roll up our sleeves because we believe actions speak louder than words, especially when it comes to protecting and preserving our environment. So, we're pleased to be hitting our waterways with buckets, rakes and gloves in hand to help clean and preserve our natural heritage. Together with the folks at the Source to Sea Cleanup, we're in good company."

To learn more about CRC, or to make a contribution to help protect the Connecticut River, visit www.ctriver.org.