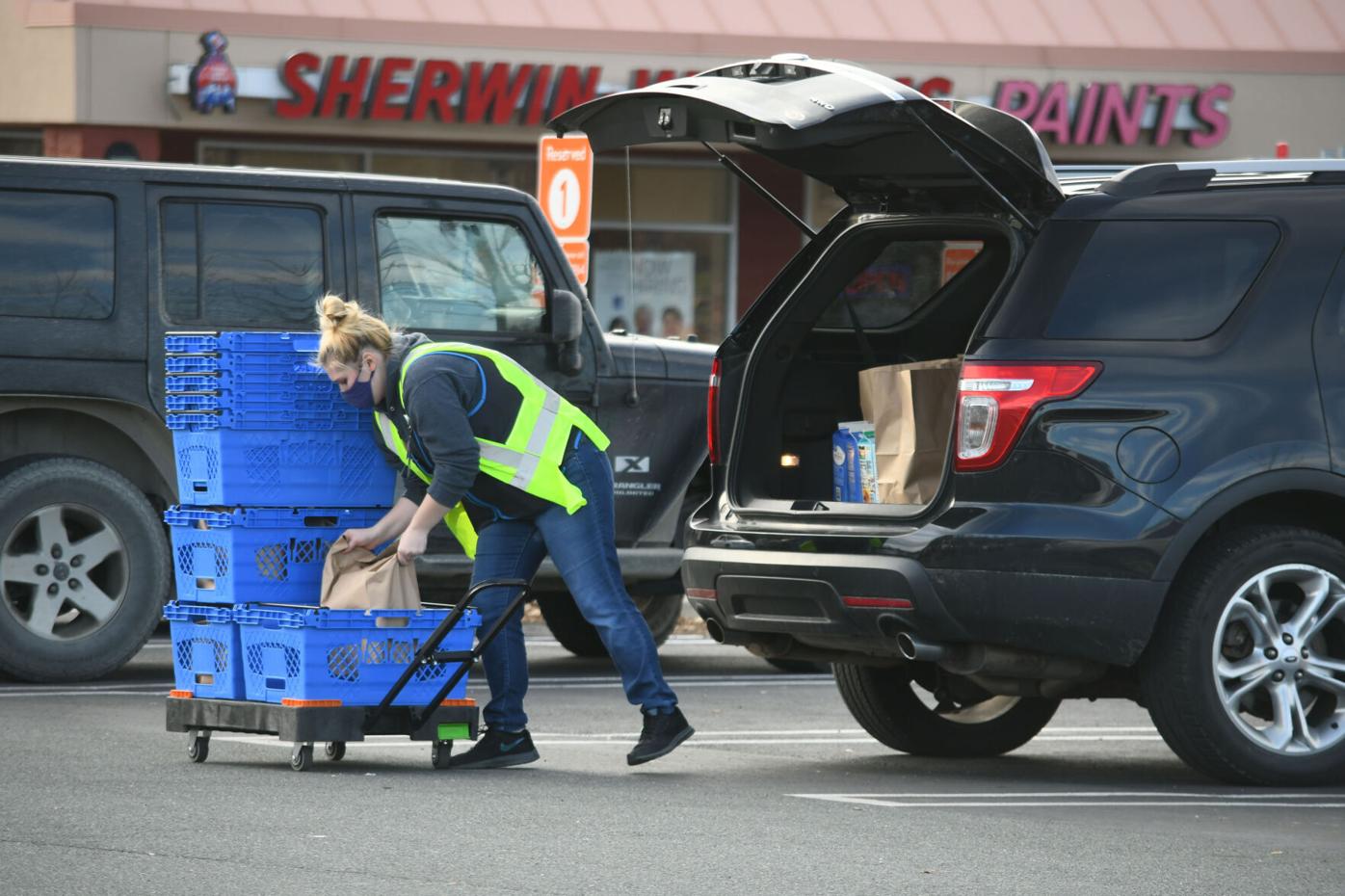 Walmart has not applied on behalf of Vermont employees eligible for up to $2000 in hazard pay benefits. This Walmart employee puts purchases in the car of a shopper taking advantage of the pick-up service, in Bennington on Thursday, November 5, 2020. 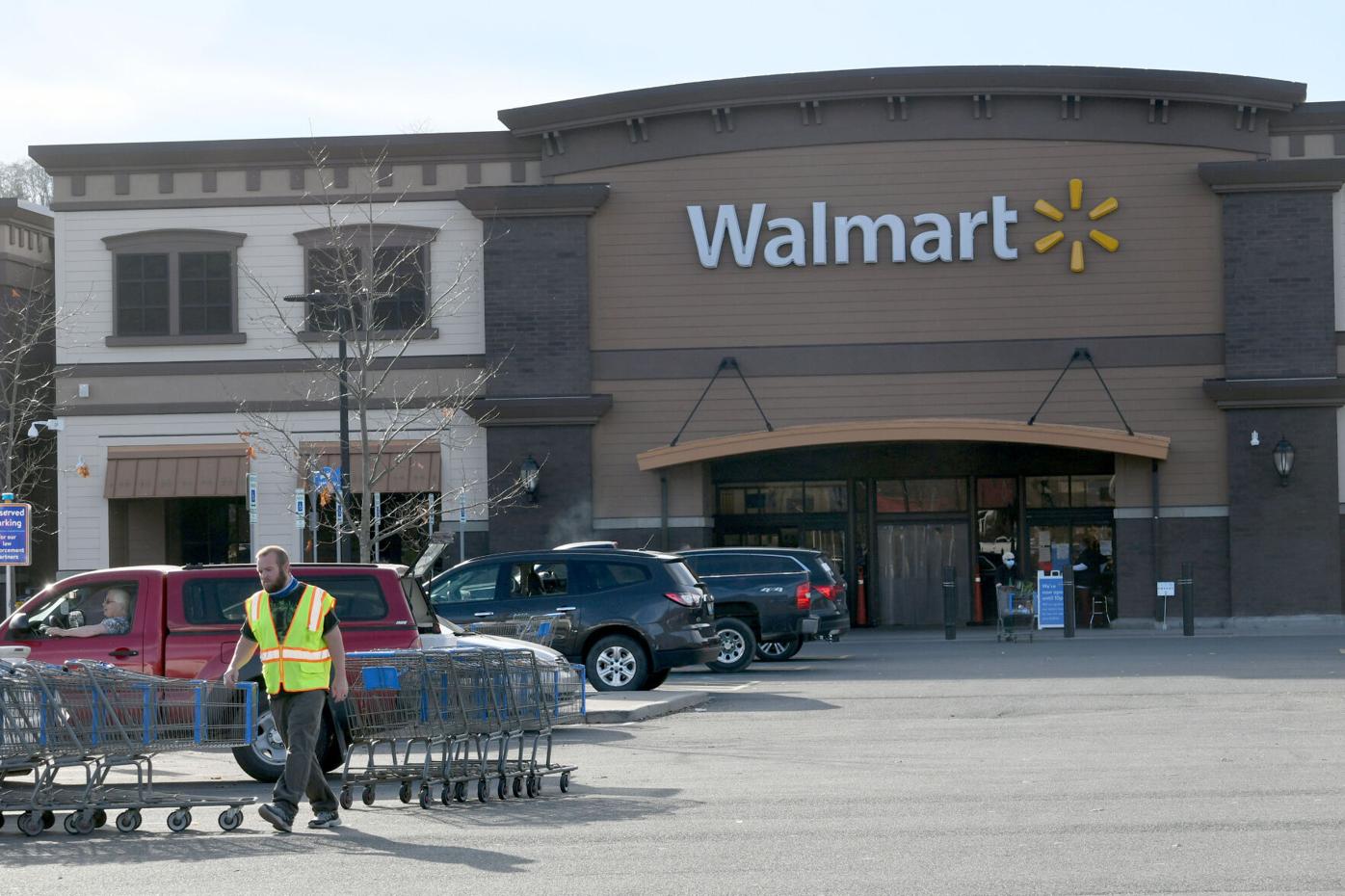 Walmart has not applied on behalf of Vermont employees eligible for up to $2000 in hazard pay benefits. This Walmart employee collects shopping carts in Bennington store parking lot on Thursday, November 5, 2020.

Walmart has not applied on behalf of Vermont employees eligible for up to $2000 in hazard pay benefits. This Walmart employee puts purchases in the car of a shopper taking advantage of the pick-up service, in Bennington on Thursday, November 5, 2020.

Walmart has not applied on behalf of Vermont employees eligible for up to $2000 in hazard pay benefits. This Walmart employee collects shopping carts in Bennington store parking lot on Thursday, November 5, 2020.

Members of the Vermont State Senate are criticizing Walmart, saying the massive retailer has not allowed its employees to benefit from the state’s hazard pay program for front-line workers who provided essential services at the outset of the COVID-19 pandemic.

Through the law workers in specified professions earning less than $25 per hour are eligible for grant funds — $1200 for part-time employees as defined in the bill, and $2000 for full-time workers.

But state Senate President Pro Tem Tim Ashe said he and other senators heard from constituents that the massive retailer had decided not to take part in the program.

The statement, signed by Ashe and senators Cheryl Hooker, Jane Kitchel, Chris Pearson, and Michael Sirotkin, pointed out that Walmart was denying hundreds of lowest-paid workers benefits they deserved for risking their health during a crisis. They asked the Bentonville, Ark.-based retailer to reverse course.

“While we believe most employers of eligible employees are indeed applying on behalf of their workforce, we are extremely concerned that Walmart has indicated they will not,” the senators said. “This means that many hundreds, if not more than a thousand, Walmart employees at their six Vermont locations will not receive either the $1,200 or $2,000 grants to which they are entitled.”

State Sen. Dick Sears, D-Bennington, said Thursday that he had also heard from constituents that Walmart was not taking part in the program. The Bennington Walmart is one of six in the state, and several others are located within a short drive of the state line, including Hinsdale, N.H., and North Adams, Mass.

“It’s frustrating that it took so long for the money to get approved and now we have some employers standing in the way of these workers getting the hazard pay they deserve,” Sears said.

In an emailed statement, Walmart spokesperson Jami Lamontagne said the company had paid its own bonuses to frontline workers instead.

“We are proud of the important role Walmart associates continue to play to ensure our communities have access to necessities like food, medicine and cleaning supplies,” Lamontagne said. “Recognizing the critical service provided by retail workers during this current historic health crisis, we’ve invested more than $1 billion in our associates nationwide, with three special cash bonuses, in addition to our quarterly incentive bonus program.

“We believe the intent of the taxpayer-funded Vermont Frontline Employees Hazard Pay Grant Program is to assist small and medium employers in the state who might be unable to pay a similar bonus, and we hope those funds can be more appropriately used by those employers,” Lamontagne said.

“It seems like such a no-brainer,” Ashe said. “If the state wants to recognize the sacrifices and risks by frontline workers during a global pandemic, I don’t understand why a company would not want to facilitate that.”

“It’s demoralizing for their workers for sure. But it also misses a chance to do something our society does too little of, which is to recognize the value of work many people perform, which often goes unnoticed,” Ashe said. “During COVID we have realized that work is more critical than society has been willing to admit or acknowledge.”

Ashe said he had been in contact with a Walmart regional communications specialist, but had not heard from that person that the company would participate.

Gov. Phil Scott’s administration is “aware of the concerns around larger retailers not applying and is proactively reaching out to them” to answer their questions, said communications director Rebecca Kelley.

“The law makes it clear that the decision to apply is the employer’s alone,” Kelley said. “Their employees appear eligible, so we do hope they apply. “

The hazard pay program was launched in June with $30.5 million in federal coronavirus funds, and was largely dedicated to healthcare workers. Another $20 million was added to the program in the fiscal 2021 budget to include retailers, food service workers, child care workers, pharmacists and other frontline positions not addressed in the original bill.

The funding is not a grant to employers; it merely passes through the employers to workers, the senators said in their letter.

The Legislature decided to have employers rather than employees apply for the grants for the sake of efficiency — and preventing the state from having to deal with as many as 30,000 applications.

“Adding insult to injury, since eligible retail employees must earn less than $25/hour to qualify for a grant, Walmart’s decision solely disadvantages its lowest-paid employees. And since eligible workers must have been on the job from mid-March to mid-May, these employees can only be considered very loyal to Walmart,” the senators said.

“Walmart’s nonparticipation in the essential worker hazard pay grant program is the coldest of shoulders to these most loyal of employees,” the senators said. “We strongly urge Walmart to reverse course and allow their employees to receive hazard pay grants. It is the right and decent thing to do.”

The Legislature’s Joint Fiscal Committee added another $8 million to the program on Thursday out of unspent CARES Act funds.

MONTPELIER — A number of large retailers, including Walmart and Shaw’s, have joined up for the state’s hazard pay program for frontline employ…