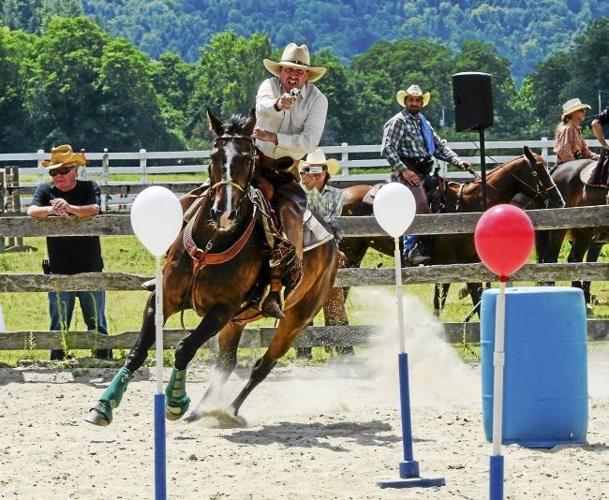 Riders from across New England compete in the first mounted shooting contest at West River Stables in Brookline on Sunday, Aug. 2. 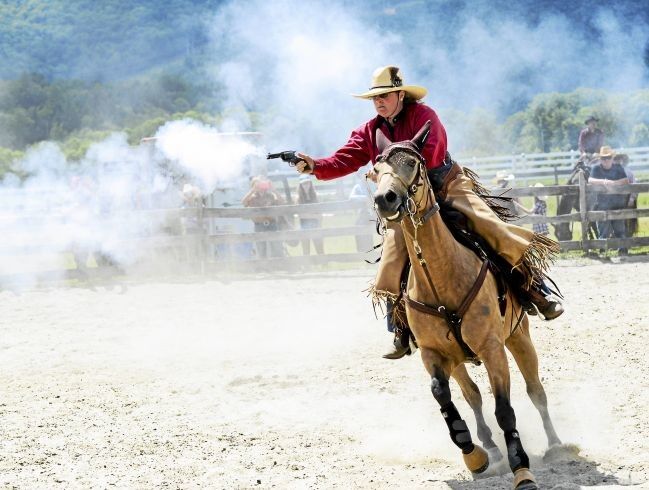 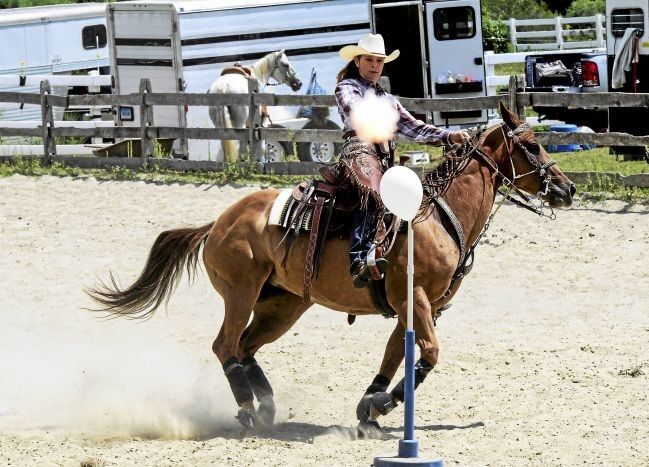 Lynn O'Connell shoots at a balloon during the first mounted shooting contest at West River Stables in Brookline on Sunday, Aug. 2. 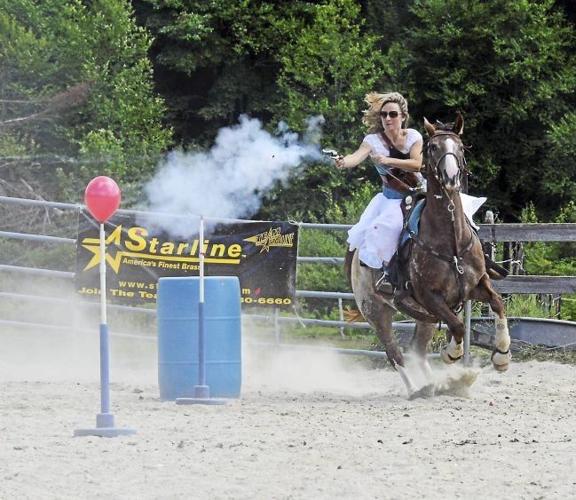 Dina Baratta shoots at a balloon during the first mounted shooting contest at West River Stables in Brookline on Sunday, Aug. 2.

Riders from across New England compete in the first mounted shooting contest at West River Stables in Brookline on Sunday, Aug. 2.

Lynn O'Connell shoots at a balloon during the first mounted shooting contest at West River Stables in Brookline on Sunday, Aug. 2.

Dina Baratta shoots at a balloon during the first mounted shooting contest at West River Stables in Brookline on Sunday, Aug. 2.

Twenty-eight horses, cowboys and cowgirls of different experience levels, arrived at the West River Stables in Brookline to compete in a series of six stages. Each of the six stages is different from one another and is selected from the 36 CSA designed stages. Some of the ladies at West River Stables wore saloon dresses, while other men and women chose the classic wide-brimmed hat, leather chaps and button-down shirt. Though style points could have easily been earned, the real attention was drawn to the horse/rider combo.

The competitors laughed and encouraged one another outside the white fence that contained barrels, 10 red and white balloons, along with one horse and his or her rider. Each contestant was equipped with two .45 caliber single action revolvers, both loaded with five rounds of blank ammunition – black powder – that can reach about 15 to 18 feet in distance.

Shooters entered the arena one at time, waited until given the go-signal, then took off through a laser-timed course. Each shooter would fire their gun at the first five balloons of the same color and then switch revolvers to shoot the next five of a different but corresponding color. The total score times are determined by taking the raw score plus the penalties. Five-seconds are taken off an individual's time if they miss a balloon, drop their gun or knock over a barrel. The lowest time wins.

"It's a careful balance between energy and control," says Steven Roy, competitor and a member of the Northeast Six Shooters. "And you're never going to see a better set of equitation than out there today because your horse is working on the edge of its adrenaline and yet has to be able to control himself enough to listen to where you want him to turn."

Christine Boudreau of Belmont, Vermont and the CT Renegades – an established group of mounted riders – co-organized this inaugural event at the West River Stables, which is managed by Roger Poitras. Boudreau explained that it was "a long road," in making the event possible. Vermont has the most permissive laws in the nation regarding the purchase and open or concealed carry of firearms. Prior to the event, it was the only state that had not yet held a CSA event. Boudreau hopes this will spark an interest in other Vermonters who will participate locally.

"Safety is the primary concern, fun is second," said Boudreau. Shooters must load their guns in a designated area, which is chaperoned by an armor man or woman, and the revolver(s) must be placed in the individual's holster until they enter the arena.

After stage four of the event on Sunday afternoon, Amy Lunt, of Weare, N.H., lead the pack with a grand total of 56.004 seconds, next to Shad Smith with 58.625 seconds and Rob Baratta with 59.617 sec. With only two more stages left in the competition, spectators and fellow opponents were putting their trust in Amy for the win. "I don't think I'm going to place first, I'm thinking second or third today, but I don't think I can catch the leader," said Baratta of Londonderry, N.H., after his fourth run.

Baratta's apprehensions were proven false, as he took home the first place prize at the event with a total time of 96.310 seconds followed by Allison Forsyth, vice president of Renegades, with 105.049 seconds and Steve Armato with 106.940 seconds for third place. Baratta, Forsyth and the top Vermont shooter, Boudreau, were awarded buckles.

Lunt who held first place after the fourth stage, broke the timer during her fifth turn, which made it an automatic 60 seconds for that run. Smith had two misses during the next two stages, which dropped him out of the top five. Despite losing her first place seat, Lunt said she doesn't worry about where she places, but tries to improve her skills a bit more each time. "Always have fun, that's the most important part," said Lunt.

Other competitors ranged from all ages at the event and Shyanne Ostrander, 15 of Torrington, Conn., was the youngest rider that day. Ostrander wore up an off-white, floral designed dress that she bought at Goodwill for $5.

Aside from the wide range of ages among the competitors, Marty Luffman drew attention to himself by placing fifth overall and with his slight southern accent. Luffman of Nashville, Tenn., has competed in all but four states of the country, and couldn't help but make the 16.5-hour trip to the inaugural VT CSA event with his walking horse that he named, Doc Holiday. "I love Vermont, I could move here," said Luffman. "Vermont is just like stepping back in time, it's so beautiful."

Luffman and Doc Holiday have travelled across the country twice, and they brought along another Tennessee friend, Dave, who typically competes or captures the action on video for sale at CSA events. "You should check out my YouTube channel, 'DaveandMarty,'" Steve said. The YouTube channel shows clips of cowboys and cowgirls at CSA events falling-off their horses. Steve put down the camera and riding boots this time around and decided to hang tight and enjoy the show.

"CSA is for a bunch of men and women who didn't play enough Cowboys and Indians as kids," Steve said with a chuckle.