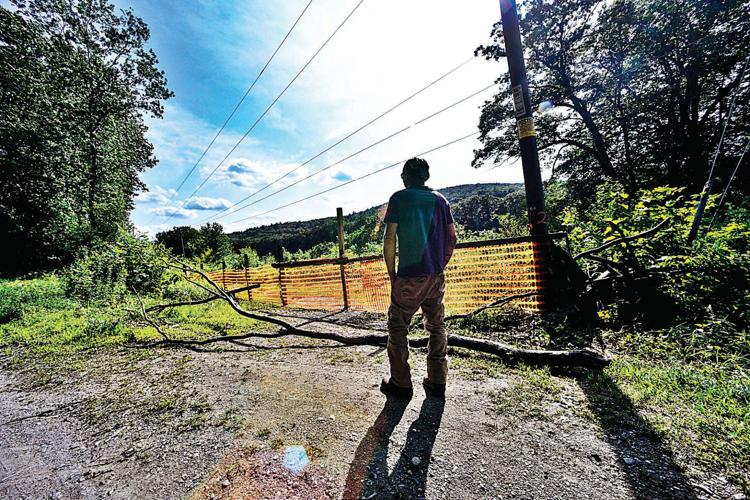 KRISTOPHER RADDER - BRATTLEBORO REFORMERMike Frost, of Newfane, looks at an orange barricade that blocks the entrance of the West River Trail on Wednesday. The trail crosses private land. Frost said, "I hiked the trail, hiked it with my girls. I liked it because it was nice and flat. I can't believe there is a barricade. It's a shame to ruin a good trail." 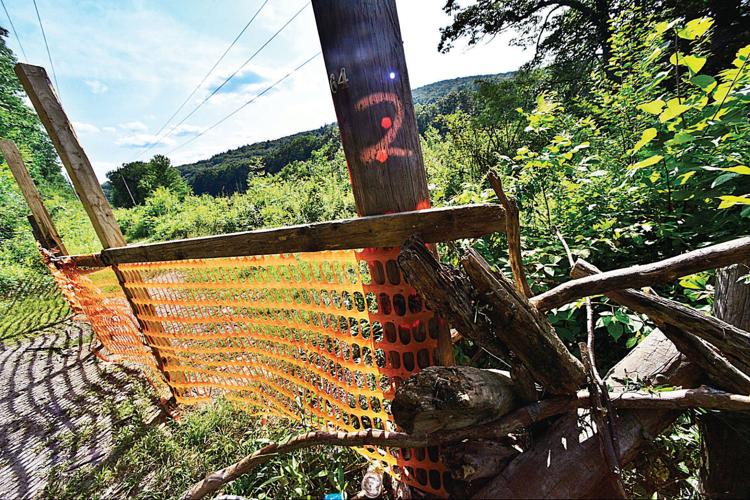 An orange fence blocks the entrance of the West River Trail on Rice Farm Road where it enters private land.

KRISTOPHER RADDER - BRATTLEBORO REFORMERMike Frost, of Newfane, looks at an orange barricade that blocks the entrance of the West River Trail on Wednesday. The trail crosses private land. Frost said, "I hiked the trail, hiked it with my girls. I liked it because it was nice and flat. I can't believe there is a barricade. It's a shame to ruin a good trail."

An orange fence blocks the entrance of the West River Trail on Rice Farm Road where it enters private land.

DUMMERSTON — A property dispute over the West River Trail is bringing parties back to court on Monday.

The two groups — Dummerston resident Melvin Mayo and the Friends of West River Trail — disagree on who owns the trailhead at Rice Farm Road. Mayo has put up a fence to keep people off his property.

Summary judgment was granted in part and denied in part to the nonprofit FWRT group on June 30. Judge John Valente wrote that Mayo's deeds did not convey to him the portion of a northern section from the eastern edge of the old railroad bed to the West River.

"As to all other matters, the motion is denied," his decision stated.

Mayo said the decision tells FWRT "they have no ownership" after going back and forth on the issue of land rights for a year. He pointed to a section where Valente says the group "acknowledges that the land it claims was acquired by the Brattleboro & Whitehall Railroad Company through a condemnation proceeding."

Mayo said he always wanted to let people use the property.

"But when [FWRT] decided to claim ownership, that's a different story," he added. "So I think we're going to have to just see how it all plays out in the coming year."

Mayo told the Reformer he would be open to granting access to a new group or another group. But he called FWRT "disreputable" and "underhanded." He said he gave the group a chance to talk about easements but no one took his offer. That, however, was disputed by the other side.

For Mayo, the issue was mostly about land ownership. But he said trail users have engaged in nudism, drug use, public drunkenness and littering. His putting up a fence is meant to signal that there needs to be some type of regulation.

Mayo said the hearing on Monday will be about whether the public has rights to the property.

"It's a last gasp of a breath to try and get some rights," he said. "But they can't even prove the public has been doing [recreation there] for that long."

His argument is that there is no West River Trail.

"There's a difference of opinion," said Lester Humphreys, chairman of the FWRT's Lower Section Committee. "It's not about our access. We're a Friends organization, which means we support the public's access to the trail.

Humphreys said that on Monday, Aug. 21, his group will be presenting deed evidence requested by the court, which is intended to show that his group does own the trailhead by deed.

"Mayo does not own the two acres down to the river by deed is what the judge has said and has said that they're open to the possibility for adverse possession," Humphreys said. "The other decision about the railroad land reverting to the landowners, that's something that we are considering appealing but we haven't made a decision yet."

The confusion, according to Humphreys, has to do with the town's tax map being incorrect.

"What Mayo's deed says is that he owns two acres up to the former railroad so his deed does not include the trailhead and the trail at that point, and the judge in that summary judgement agrees with that," Humphreys said. "We've gained a deed for the other two acres from the other two owners and the judge has asked for more evidence on that chain of deeds that we will be presenting."

Humphreys said the trail existed before his group was formed about 20 years ago — when the railroad tracks were ripped up in the 1930s or possibly before that.

"We're talking 70 years of the public using that trail and our organization was set up as a nonprofit to support the trail, and it's the public's right to use this existing trail," he said, calling it "unfortunate" that Mayo has "decided to obstruct trail users and the public from using the trail they've used forever and claimed property that's not his."

Most of West River Trail users access it from the end by The Marina in Brattleboro, according to Alex Wilson, a member of the steering committee for the Lower Section of FWRT. But people entering from Dummerston or taking a longer hike have been affected.

"I think it's discouraged a lot of people just in the last few days since that fence has been up," said Wilson.

He said he has been involved with an initiative to create a trail along the property in question since 1996. He claimed efforts to reach out to Mayo about easements were unsuccessful.

"It's really disappointed us that he hasn't been willing to talk with us and see if his needs could be set aside as well as ours," Wilson said. "It's too bad because we're just a group of volunteers wanting to create a resource for the region, a nice amenity that will benefit everybody. When something like this happens, that really sets that back and really harms the public."

"I think it's well supported by the deed research we've done but beyond the actual deeds, the trail itself has been in use for decades and so we believe strongly that there exists a prescriptive easement on it to let the public continue to enjoy the trail," he said. "Our goal from day one has been to create a public recreation trail for bicycling and walking, a place where people can enjoy nature, enjoy beautiful vistas and have it be a trail that everyone can use. That's still our goal today. We're real excited the trail, despite a few hiccups, is really well used and people love it."

On Wednesday afternoon, Newfane resident Mike Frost was at the trailhead. He told the Reformer he hiked the trail with his daughters.

"I liked it because it was nice and flat," he said. "I can't believe there is a barricade. It's a shame to ruin a good trail."

A post about the fencing on FWRT's Facebook page saw 53 comments by Thursday morning. One user summed up the situation as "a curious, unfortunate fuss."

"I absolutely love that trail it's such a nice relaxing hike and so beautiful," another user added. "Have taken my kids there's waterfalls to explore and places to stop down by the river."

Other users defended Mayo or the rights of private property owners as explanations were offered by members of FWRT.

"It's funny how everyone just believes what's posted," one user wrote. "Stop crying and call the town office for clarification. He owns and pays taxes on it."