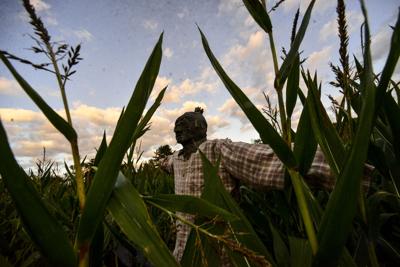 GUILFORD — At Gaines Farm in Guilford, you can pick your own pumpkins, buy down-home maple syrup, knock heads in a bouncy house, take a dusty roll in the “corn box,” pet a piglet, stroke a pony and for an extra 13 bucks, be chased in the dark through a 7-acre corn maze by a pack of axe wielding killer clowns.

Gaines Farm has held fast for eight generations — since 1782. The family dries hay (40 acres), tends squash (20 acres), grows corn (a butt-load), and raises 55 head of Kobe beef. In 1994, Bob and Jacqueline Gaines used the outlying woods of their farm as a haunted hayride fundraiser for the high school. It was a smash. Today, the hayrides consist of four tractors, each hitched with a 20-seater wagon that rumbles through the forest as actors dressed like serial killers and spawns of Satan leap from the trees with butcher knives, chainsaws, and assault rifles. While the hayride is truly scary, the haunted corn maze at Gaines is notorious for inspiring a loss of bodily functions.

Now, every weekend for the month of October, throngs of people flock to the farm. At dark, the tractors start to roll and a line of hundreds snakes the main field. Kids toss corn husks into a snarling bonfire. Groups of middle-schoolers will laugh nervously as they inch their way to the head of the line.

But at 5 p.m., it’s still light, and there’s work to be done. The Devil and a Goblin have to resituate a fog machine on account of the wind. Two strobe lights must be moved. There’s more blood to be spattered and Pennywise needs his head fixed. Plus, somebody is missing a chainsaw.

“That’s not gonna work,” the Goblin tells a demon who struggles to hang a plastic tarp.

Corn maze basecamp for “skit three” is five rusty chairs and a small fire pit resting on a grassy strip between the last row of corn and the isle of trees that run along Route 5. Above, is a 10-foot makeshift scaffolding that looks out over the maze. It’s strung with severed limbs, trails of extension cords, and fake cobwebs.

It’s clear the Goblin is the maze foreman. “There’s Jerry, Mike, and Keith,” he motions to the north end of the corn field where one of three smoke signals rise. “I trained them four years ago, so they know what they are doing. They are in the skit before us.”

There are three “skits” devoted to separate sections of the maze. The Goblin explains it’s like a play. When a chainsaw goes off during Jerry, Mike and Keith’s skit, this cues the Goblin and his underlings. They put down their hot dogs, scuttle to various hiding spots amongst the corn, then, when a group of terrorized teenagers comes barreling down the path, they leap out with their own chainsaws and scare everybody back in the direction of skit two.

“See all this trampled corn,” the Goblin points at some mashed stalks along the path’s curve. His chest puffs a little. “That was cuz of us.”

Scaring the life out of people is a point of pride shared among all cast members of the haunted corn maze.

“Don’t tell us you don’t like clowns, because we are gonna harass you,” Uncle Sam Clown announces by the fire at skit one’s basecamp. It’s true. All the clowns agree, if you show fear, it just makes your situation worse.

Uncle Sam Clown is from Turners Falls, and got the gig on account he used to bail hay with one of the haunted hayride wagon drivers. His gal Hailey, a retired clown, is reclined in a lawn chair beside a red pick-up. She says she quit the clown biz a few years ago because somebody did not react well when she lunged at them from the corn. In fact, she got socked in the chest pretty hard, which apparently is not uncommon. The Goblin has been punched a few times during his corn maze tenure. He says, “You can’t take it personal. When you scare them like that, it’s a fight-or-flight thing.”

So now Hailey just hangs out at basecamp and tends the fire.

Attractions at Gaines farm have grown to include “non-scary” hayrides during the day, along with a “twilight corn maze” (also not scary). From 11 a.m. to 5 p.m. there’s tons of little-kid activities: A permanent bouncy house (well, it’s more like a bouncy floor), the “corn box” (a variation of the sand box but with dried corn kernels), a shiny new jungle gym, a baby animal petting farm, and a family of silky golden retrievers who prance like royalty around the outdoor pen of the Gaines Farm dog kennel.

Jackie Gaines has bred golden retrievers since 1978. She is a no-frills lady who likes to keep busy and believes in “diversification,” though she admits, “My husband and my sons would rather be doing something strictly to do with agriculture.” But Jackie is a realist. “I will be straight-up,” she motions to the cornfield where smoke rises and Werewolf howls have begun to echo. “This helps us keep the family farm.”

The haunted hayride at Gaines Farm costs $15, the corn maze is $13; you can get a combo pass for 25 bucks. The previous Saturday, over 900 people visited Gaines Farm to have their bodily fluids scared out of them. You do the math.

Still, Jackie is not happy that “non-necessities make money ... the value of food is not considered enough in this area or even the United States. If you want to make money around here, make chocolates. Make scented candles.” She says it makes her angry.

Though the hardships of the Vermont dairy industry have captured the headlines, livestock and vegetable farms also face increased production expenses with simultaneous pressures to reduce their prices. The change of assets to younger generations is also tricky. Not everybody wants to keep up the family farm. To stay afloat can be a fight.

During the autumn festivities at Gaines Farm, you may find Jackie: gently breaking up scuffles in the bouncy house, ensuring no corn kernels get shoved into compromising places, discouraging tail-yanks, mane-pulling, and any type of baby animal torture. In the afternoon, she strides purposefully back and forth over the fields, across the parking lot, to the ticket booth, to concessions.

At 5:30 p.m., an hour-and-half before everything goes down, Bob Gaines sits at a picnic table by the port-o-potties and stares blankly at a massive pile of wood scraps soon to leap with 15-foot flames. If it gets really busy, he says, he will pull out the fifth tractor and help with the hayrides.

He and Jackie have four kids. Some of them still help regularly on the farm. One of his boys plays Leatherface from Texas Chainsaw Massacre along the hayride. His eldest son was in charge of the corn maze for a year, “but it wasn’t really his thing.” Anyway, he just moved to Florida.

Bob is not a talker, though he does mention a chance of rain tomorrow, which is bad timing since Saturday is their big night. He stares at the wood pile for a bit longer.

Back at basecamp, things are ramping up. It’s close to dark. From atop the scaffolding the Goblin stares out at the fields, the yellow oaks, the orange maples, a sky that — blessedly — gives no indication of rain.

One might imagine the maze looks less foreboding from up there. That it’s pretty easy to see the way out. The withered corpse that dangles like a scarecrow above the corn rows may appear less menacing. Pennywise is just a silly puppet with duct tape stuck to his head. From up there, it’s probably hard to believe that when night falls, when your boots are back in the dirt, you might be tearing blindly through the corn with no exit in sight. And that if something scary should lunge from the shadows, there are just two options: flight or fight.