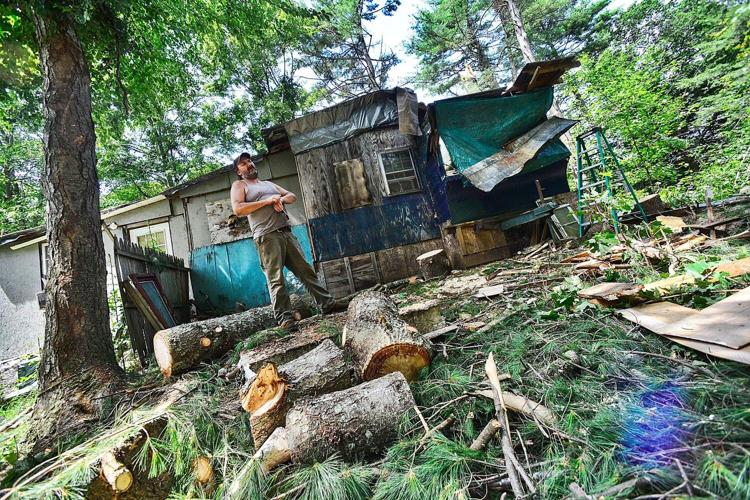 Photos by KRISTOPHER RADDER - BRATTLEBORO REFORMERMelvin Lowell shows the damage at 168 Trail Road Extension in Westminster on Monday after a tree fell on the roof during the powerful storm on Saturday. 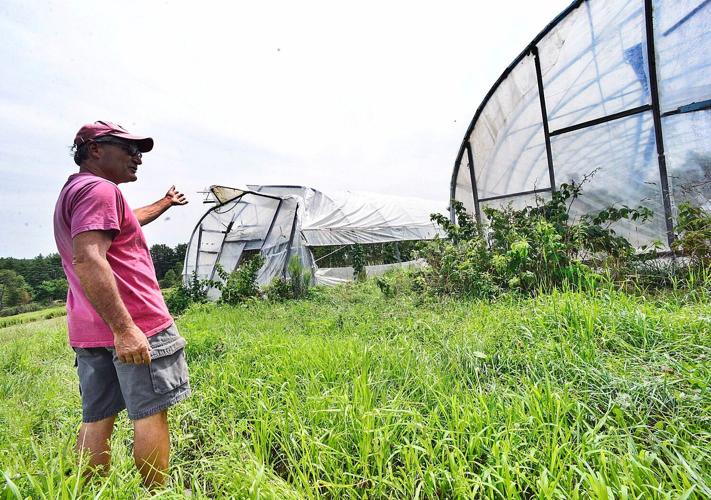 Howard Prussack, owner of High Meadows Farm, in Putney, Vt., shows the damage to one of the greenhouses from Saturday's storm. 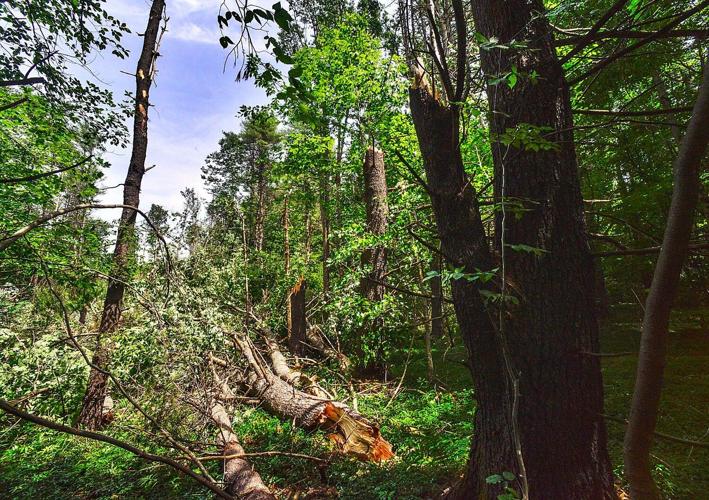 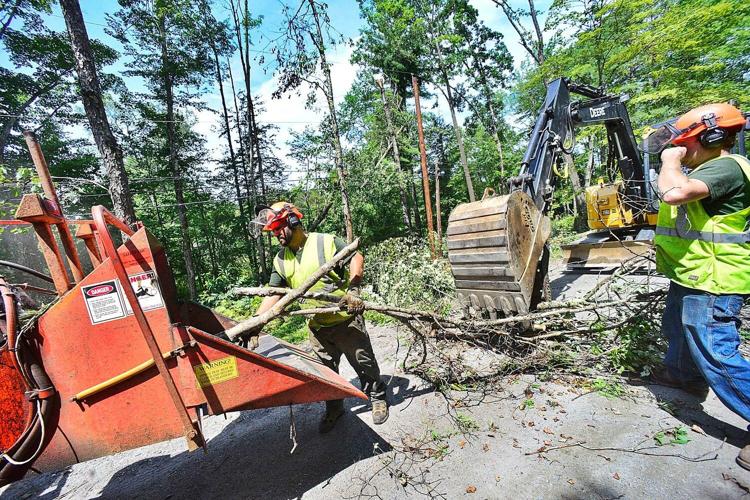 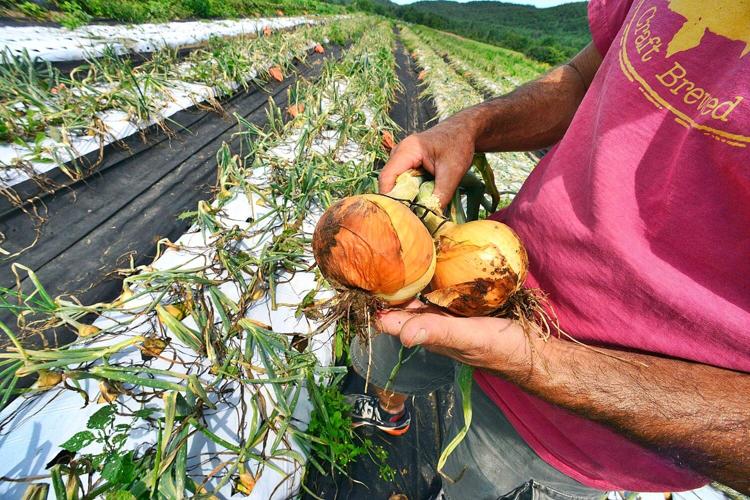 Howard Prussack, owner of High Meadows Farm, in Putney, Vt., holds an onion while talking about the damage to his crops on Monday. 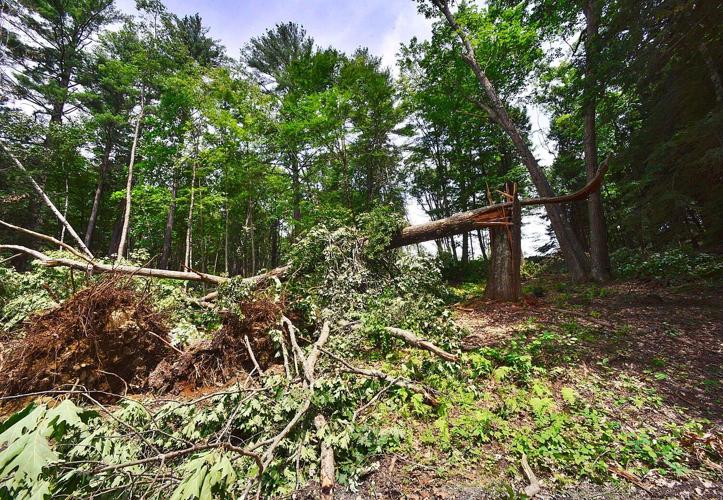 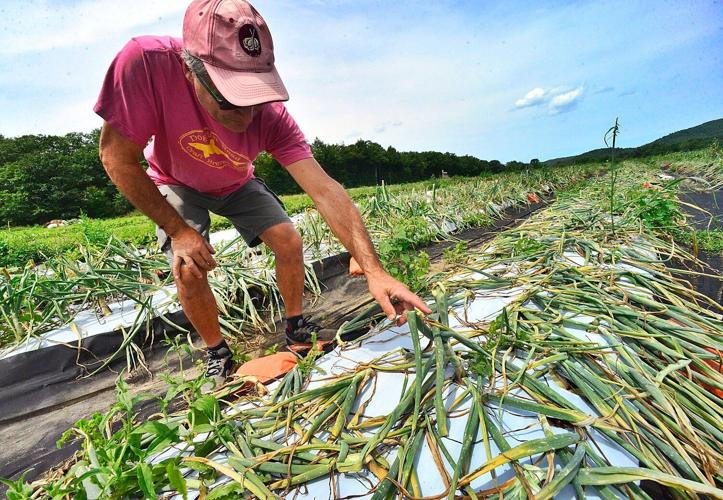 Howard Prussack, owner of High Meadows Farm, in Putney, Vt., holds an onion while talking about the damage to his crops on Monday, July 30, 2018.

Photos by KRISTOPHER RADDER - BRATTLEBORO REFORMERMelvin Lowell shows the damage at 168 Trail Road Extension in Westminster on Monday after a tree fell on the roof during the powerful storm on Saturday.

Howard Prussack, owner of High Meadows Farm, in Putney, Vt., shows the damage to one of the greenhouses from Saturday's storm.

Howard Prussack, owner of High Meadows Farm, in Putney, Vt., holds an onion while talking about the damage to his crops on Monday.

Howard Prussack, owner of High Meadows Farm, in Putney, Vt., holds an onion while talking about the damage to his crops on Monday, July 30, 2018.

No one was hurt during the storm, despite its violence, which sent trees into homes, blocked more than a dozen roads and even landed on a car being driven by a Springfield woman on Route 5, near the Putney town line.

Vermont State Police said Christie Hunt escaped injury Saturday afternoon when a very large tree fell on top of her 2015 BMW as it was headed south.

Hunt, 44, was able to free herself from the vehicle, which was crushed by the tree that fell across its hood.

Westminster Town Manager Russell Hodgkins said Monday the National Weather Service determined that it was a straight-line wind storm that hit Westminster, just north of the Putney-Westminster town line, despite suspicions that it might have been a tornado or even a micro-burst storm.

"We did get confirmation it was straight-line wind," he said.

Jennifer Vogt, a meteorologist with the National Weather Service in Albany, N.Y., said a review of the radar from Saturday afternoon showed no indication of rotation in the winds, a prime indication of a tornado.

She said photographs of some of the damage from the storm showed trees falling in the same direction, which is a prime indication of straight-line winds.

In a tornado, the trees fall down in every direction.

The Westminster highway crew was busy cutting fallen trees and moving brush off Pine Banks Road Monday morning, one of the hardest hit areas of town.

Highway employee Chuck Lawrence said he got the call Saturday afternoon, and he tried to respond to Westminster West and immediately hit a tangle of downed trees on Patch Road.

But as he got to work with his personal chainsaws, he said about 15 people stopped and just pitched in, hauling brush out of the road.

Lawrence said the storms just seem to be getting fiercer and fiercer.

"I don't know if it's climate change," he said. "But there's something going on. Now it's happening two or three times a summer."

Town resident Dave Kissell said he was out in a field on his tractor when the storm hit.

Kissell said he worked with his own chainsaws Saturday to open up Pine Banks Road, finishing at 11:30 p.m..

Hodgkins said that it will be three weeks before all the town's roads are cleaned up from all the debris, but he said despite the heavy rain, there was little structural damage done to the town's roads. He estimated that the storm cleanup would cost about $80,000, money the town hadn't budgeted. He said he doesn't expect that to be reimbursed by the state. He said 15 roads were affected by the weather, seven of them severely.

A second car, unoccupied and parked at a home on Pine Banks Road, was also crushed by a falling tree.

He said he had received reports of anywhere from six inches of rain to an inch and a half. "It depends on where you were," he said.

Farmers on Westminster West Road were assessing the damage to both crops and property Monday.

Prussack wasn't home when the storm hit, but he said the hail damaged his squash, pumpkins and early onion crop, and his employees were out harvesting a field of WallaWalla onions Monday morning.

Next to the onion patch, a large field of acorn squash and pumpkins showed damage from hail, and Prussack said salvaging the squash would be a challenge.

He said he was still waiting to see how the plants rebounded from the damage, but he held out a large squash leaf, sporting large jagged holes from the hail.

Prussack said the storm damage really only hit a narrow swath of the town; fellow organic vegetable farmer Paul Harlow, whose farm is located on the Connecticut River in the northeast corner of the town, saw no damage, he said.

Nearby, a large greenhouse which housed a crop of cucumbers and tomatoes, was twisted on one end.

Prussack said fixing the greenhouse, with its interconnected framework, would be harder than building a new one.

But a giant sugar maple tree, which he guessed was planted the same year his 1820s house was built, was twisted and cracked, although it didn't lose a limb in Saturday's storm.

Prussack had had the tree pruned and cabled after a storm three weeks earlier, but the tree surgeon had already been by and had delivered his diagnosis. The tree had to come down, or it would come down by itself — onto Prussack's house.

Just up the road, at Livewater Farm, a centuries old sugar maple tree, one of a pair, had come down, blocking the road Saturday, but by Monday, it was cut in pieces and on the lawn.

"I guess I'll have to get drapes," said Miriam Acquaviva, who along with her husband Bill and son Taylor, run the organic dairy and vegetable farm.

Taylor Acquaviva, who recently took over the running of the farm from his parents, said the worst damage was to the farm's fences, since multiple trees came down on the pasture fences. Other, less obvious, damage would be to the family's sugarbush, said his mother.

Melvin Lowell pf 168 Trail Road Extension said one tall pine tree snapped off in the wind and fell onto another pine, and both hit his family's mobile home.

He said the trees damaged the roof and a window in the home, and he said he and other family members were working hard to clean up and make repairs before the next round of storms hit, expected on Thursday. Despite the damage, the family was still staying at their home.

Lee Lowell was sitting inside the house when the storm hit Saturday afternoon.

"I heard a loud crack and the whole house shaked," he said.

Luckily, no one was hurt, Lee Lowell said.

"Thank god, no one was hurt," echoed Miriam Acquaviva, on the other side of the town.