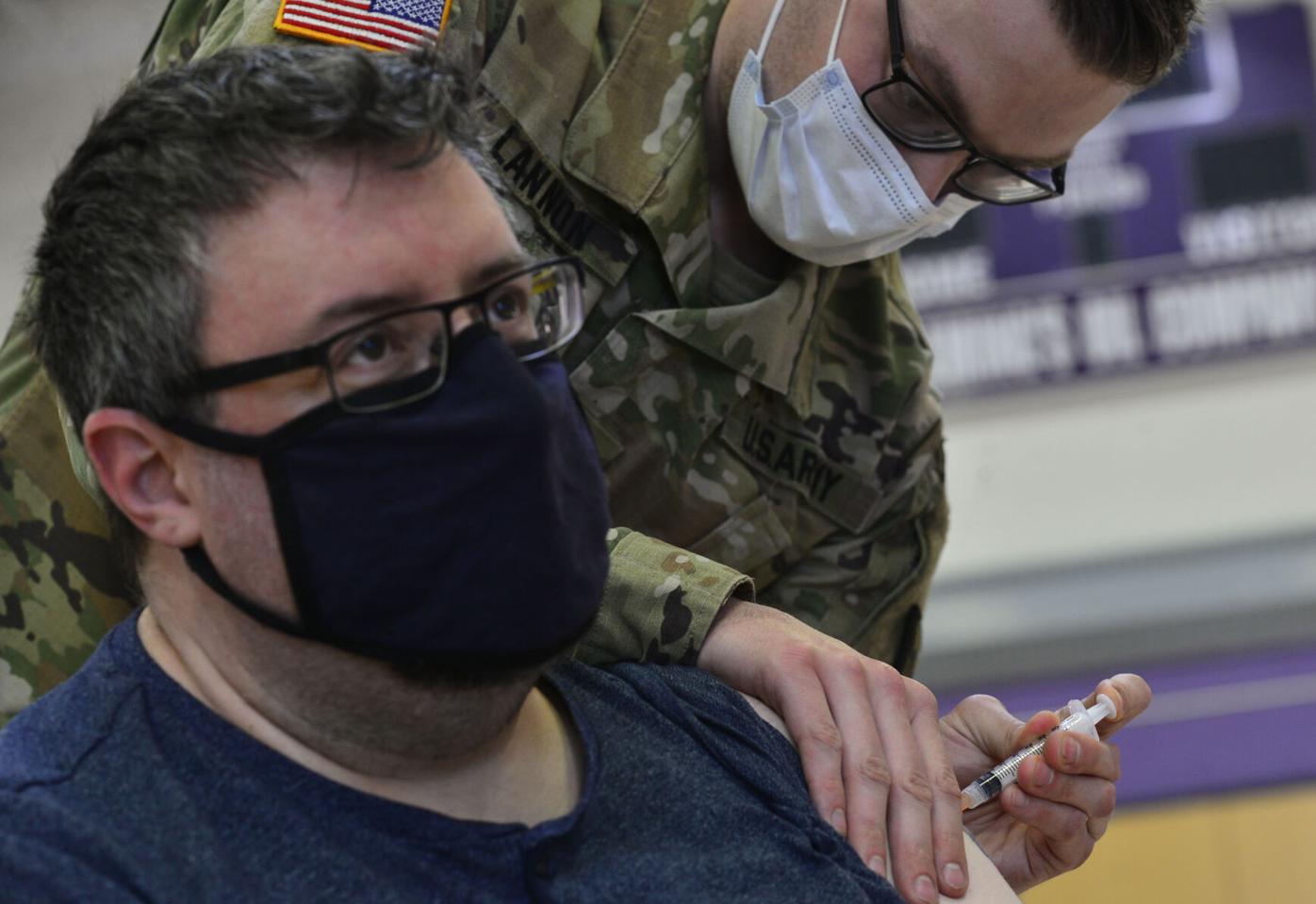 First Lt. Peter Lannon, a nurse with the Vermont Army National Guard, administers a dose of the Moderna COVID-19 vaccine to Frederick Farima Jr., of Brattleboro, Vt., during a vaccination clinic at the Brattleboro Area Middle School on Wednesday, April 14, 2021. 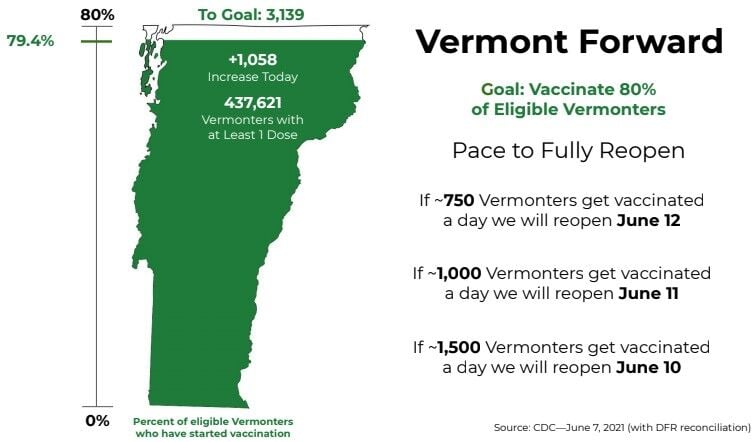 As of Tuesday, Vermont was less than 3,200 vaccinations from lifting its COVIF-19 restrictions immediately. 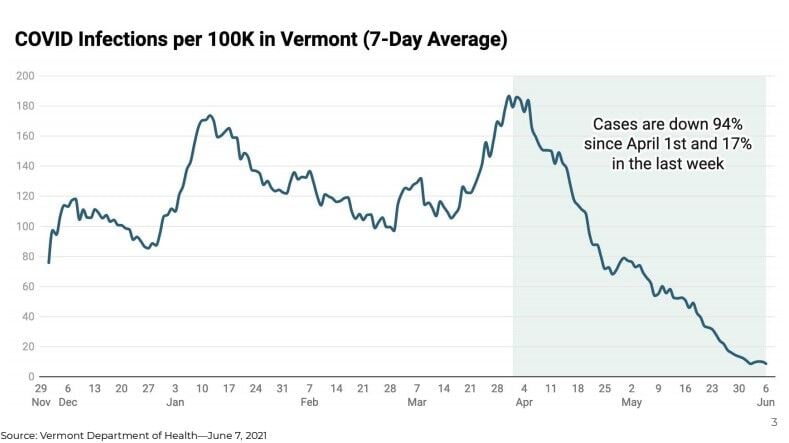 This chart from the Vermont Department of Health shows a steep decrease in COVID-19 cases in the state — 94 percent since April 1.

First Lt. Peter Lannon, a nurse with the Vermont Army National Guard, administers a dose of the Moderna COVID-19 vaccine to Frederick Farima Jr., of Brattleboro, Vt., during a vaccination clinic at the Brattleboro Area Middle School on Wednesday, April 14, 2021.

As of Tuesday, Vermont was less than 3,200 vaccinations from lifting its COVIF-19 restrictions immediately.

This chart from the Vermont Department of Health shows a steep decrease in COVID-19 cases in the state — 94 percent since April 1.

MONTPELIER — We’re so close, but we’re not there yet.

That was the message from Vermont Gov. Phil Scott and his administration on Tuesday, as they urged remaining eligible residents who have yet to be vaccinated to step forward and roll up their sleeves so the state can end its COVID-19 restrictions.

As of Tuesday, 79.4 percent of eligible Vermonters had at least one dose of a COVID-19 vaccine, officials said. Another 3,139 first shots is all it will take for the state to pass the 80 percent threshold. Scott has pledged to end the restrictions the same day that happens, and the administration expects that could happen by the end of the week.

“For now we’re at a stage relying on pop-up clinics a handful at a time, and that’s OK,” Scott said. “We’re going to keep pushing because every single dose can save a life.”

Officials also sought to reassure Vermonters who are concerned about removing restrictions.

Pieciak said Connecticut, New Hampshire and Rhode Island, all of which rescinded restrictions last month, did so when their vaccination rates were lower than Vermont’s current rate. All three states have seen continued declines in COVID-19 cases since, Pieciak said.

He also cited statistics showing Vermont has the nation’s lowest hospitalization rate, most doses administered to persons 65 and older, and the highest percentages of people starting and completing vaccinations.

“All of this should give us confidence we can safety take the final step and reopen Vermont safely when we hit 80 percent,” Pieciak said.

“There are hundreds working behind the scenes handling the logistics to make our efforts a success. It has been an amazing team effort,” Smith said. “And I especially want to thank Vermonters for stepping up and making this possible.”

Asked if 80 percent vaccination is an arbitrary figure and restrictions could be dropped now, Scott said his goal is getting as many Vermonters vaccinated as possible.

“The more work we do right now the better off we’re going to be in fall and winter. We are leading the country in this regard,” Scott said. “We all need goals in life ... this is one I felt was sustainable.”

A number of questions for Scott and Smith centered on what will happen to homeless people now staying in hotels and motels and to persons who have been protected by the eviction moratorium when Scott’s emergency order ends. That is expected to happen several days after restrictions are dropped, Scott said.

On the hotel and motel voucher program, which housed as many as 2,600 people by waiving previous eligibility restrictions, Smith said careful attention has been paid to minimize the impact of a change in policy.

Smith said criteria for the program has been expanded to include people with children, people with disabilities and older Vermonters. He also said the state is allocating federal funds to help households make the transition to permanent housing.

Continuing the hotel and motel voucher program as it has operated through the pandemic would have cost $106 million in fiscal 2022 — a cost that was “not sustainable,” Smith said. Instead, the program, which operated at a cost of between $5 million and $7 million before the pandemic, will cost the state $38 million in the coming fiscal year, he said.

HOPING FOR THE BEST

Several questions were asked about the future of Koffee Kup Bakery and Vermont Bread Co., following Monday’s decision by the company’s receiver to approve a sale of the now-closed company’s assets to Flowers Foods of Thomasville, Ga. The buyers pledged to pay out-of-work employees paid-time-off balances, but has “no immediate plans to reopen the bakeries.”

The receivers’ decision to award the assets to Flowers Foods, based on its ability to make good on the paid time off owed workers, caught the state by surprise. But Scott and Commerce and Community Development Secretary Lindsay Kurrle made clear they have not given up hope that Flowers might yet choose to operate its bakeries in Brattleboro and Burlington.

In 2018, Flowers Foods purchased the Country Kitchen bakery in Brattleboro, and months later ceased operations, putting 60 employees out of work. Flowers now uses that facility as a warehouse.

But if the bakeries are to remain shuttered, the state is ready to help employees get back into the workforce, Kurrle and Labor Commissioner Michael Harrington said.

“We’re certainly hearing from employers looking to hire those employees now,” Kurrle said. “They need them now, and they need their skills.”

Vermont Bread Co., a subsidiary of Koffee Kup, employed more than 90 workers at its facility on Cotton Mill Hill in Brattleboro. It closed suddenly on April 27.

"We're going to keep pushing because every single dose can save a life."