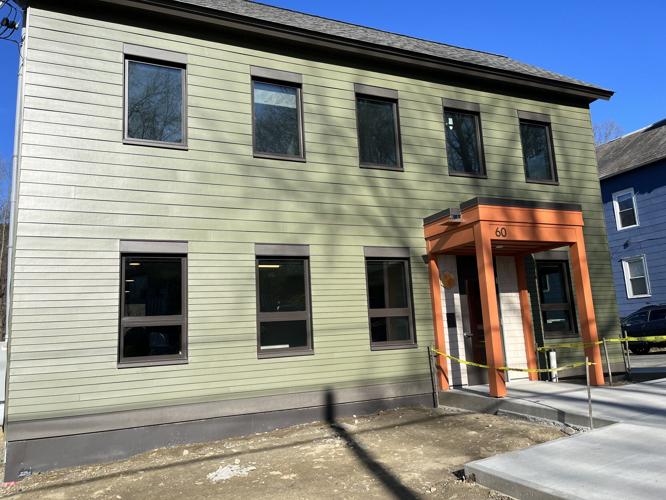 Healthworks and other Groundworks Collaborative services are now based at the newly constructed 60 South Main St. 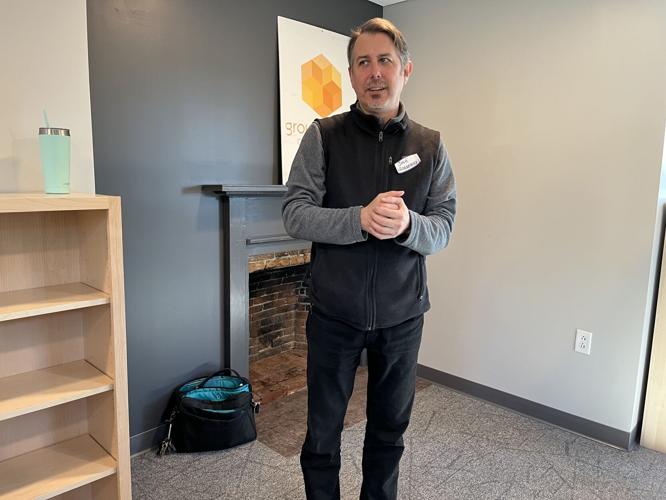 Healthworks and other Groundworks Collaborative services are now based at the newly constructed 60 South Main St.

BRATTLEBORO — A fireplace is all that remains of the former Drop-In Center at 60 South Main St. due to a requirement of a historic review by the state.

Josh Davis, executive director of Groundworks Collaborative, said his group made a good-faith effort to keep the building, which was a Cape Cod style house that first went up around 1788, but it had to be torn down.

“It was 1,900 square feet,” he said in an interview Thursday during an open house event. “The building was in horrible disrepair.”

The new building at 60 South Main St. is now home to Groundworks’ Case Management and Representative Payee programs, as well as a dedicated location for its growing Healthworks collaboration. Healthworks is a program that brings providers from the Brattleboro Retreat, Brattleboro Memorial Hospital and Health Care & Rehabilitation Services on site to work specifically with participants in Groundworks’ shelters and permanent supportive housing programs.

The fireplace is no longer functional, as it’s not hooked up to the chimney.

“So now it’s like a historical artifact,” Davis said. “But it’s allowed us to tear down the rest of the building.”

On one side of the first floor is a space for the supportive services team. His group is getting $681,000 in federal earmark funding from Sen. Patrick Leahy, D-Vt, to expand its embedded provider program.

“We’re basically doing a medical program here on health care for folks who are without housing,” Davis said, “and it’s cutting edge to do it cross organizationally like we’re doing it.”

Davis said the idea is to “try and bring services to people where they are.”

Medical exams will be conducted in another room near the front door. Across the hall is where a representative payee will help participants with benefits and paying bills, and one-on-one therapy sessions will be held.

Upstairs is a case management office.

“We utilized open office space concepts,” Davis said, “because most of the folks that are going to be here are just needing a hot seat to come in and do some notes, take a breath, file some paperwork. It’s not necessarily client space, but just the space for folks that work here.”

Davis said most members of the case management team are serving people who are camping or living in motels, apartments connected with Groundworks or the Groundworks shelter next door, which was recently constructed. In the building with the shelter are offices for support workers, a landlord liaison, a data analyst, and an employee who keeps track of community members experiencing homelessness and their services.

A small room upstairs in the new building, referred to as the “phone booth” or “Zoom room,” offers people privacy to communicate. Another open office space also is located upstairs.

Davis counted 45 employees within Groundworks. He anticipates with the expansion of Healthworks, the program will have the capacity to serve about 150 people.

The program’s inception dates back to about 10 years ago, when Davis first joined Groundworks. He and Kurt White, vice president of outpatient programs and community initiatives at the Retreat, were kicking around ideas.

“We just needed support for clinical support,” Davis said. “We were seeing a big need for that. And Kurt’s like, ‘Well, you know, I’ve worked in these programs. We embed providers.’ And I said, ‘Great, let’s try it.’ And it wasn’t as easy as plug and play.”

Davis credited Rhianna Kendrick, director of operations at Groundworks, with turning a good idea into a program.

“It’s taken a few years to figure out what that magic formula is,” Davis said.

As part of the program, BMH has a “respite bed” for participants at the hospital until Groundworks has a bed ready for them.

Davis said Groundworks is absolutely seeing better outcomes as a result of the program.

“What happens in our shelters, in our programs, we have such a close connection to people,” he said. “But in terms of the depth of what people need in those services around physical health supports, mental health supports, substance use supports, we don’t have the skills to be able to do all of that. It’s good to have the experts be able to come in and do what they’re really good at to support the work that we’re doing. It makes a huge difference in people’s lives.”

Davis called the partnership between the group involved in the program “incredible.” He said the four organizations approach issues from different perspectives and have worked through the logistics of how to come together for Healthworks.

“We’re hitting next level now,” he said. “And so with the funding from Leahy — pardon this — but we can take the groundwork that we’ve done for the last few years and really build on that to take this Healthworks model to the next level. And I really think what we’re doing is really innovative, not just for a rural small town, but really innovative in the work that we’re doing around supporting people experiencing homelessness. This is a model that could be used throughout the rest of the state, if not the rest of the region, and really get people connected to the care that they need.”

GPI Construction of Brattleboro built the facility designed by Duncan Wisniewski Architecture of Burlington. They both came to the project looking at how to best serve the needs of participants, Davis said.

“It’s so uplifting and yet affordable and pragmatic and understands all the different variables that we’re working with,” he said.

Combined with the new shelter and offices next store, he estimated the price tag totaled just more than $4 million.