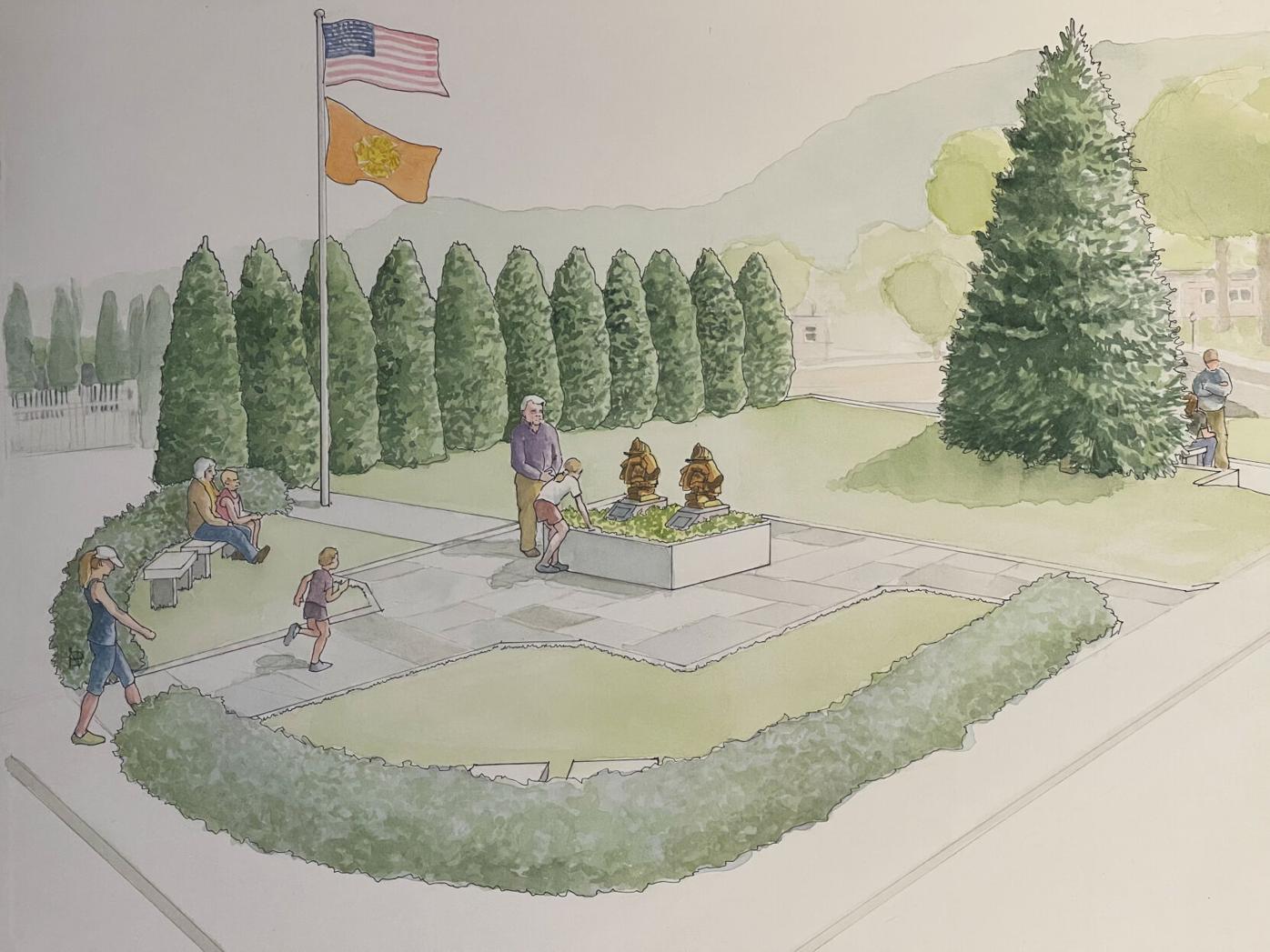 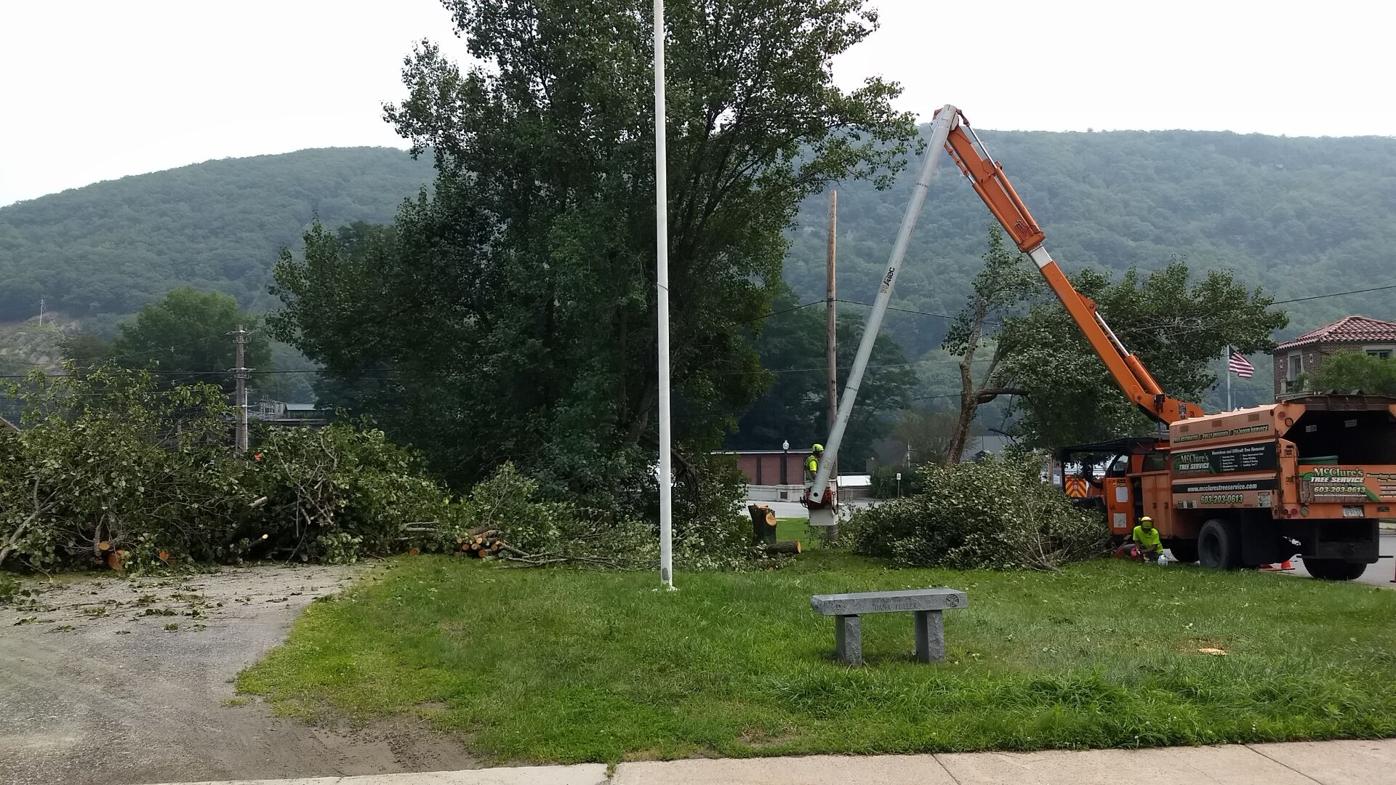 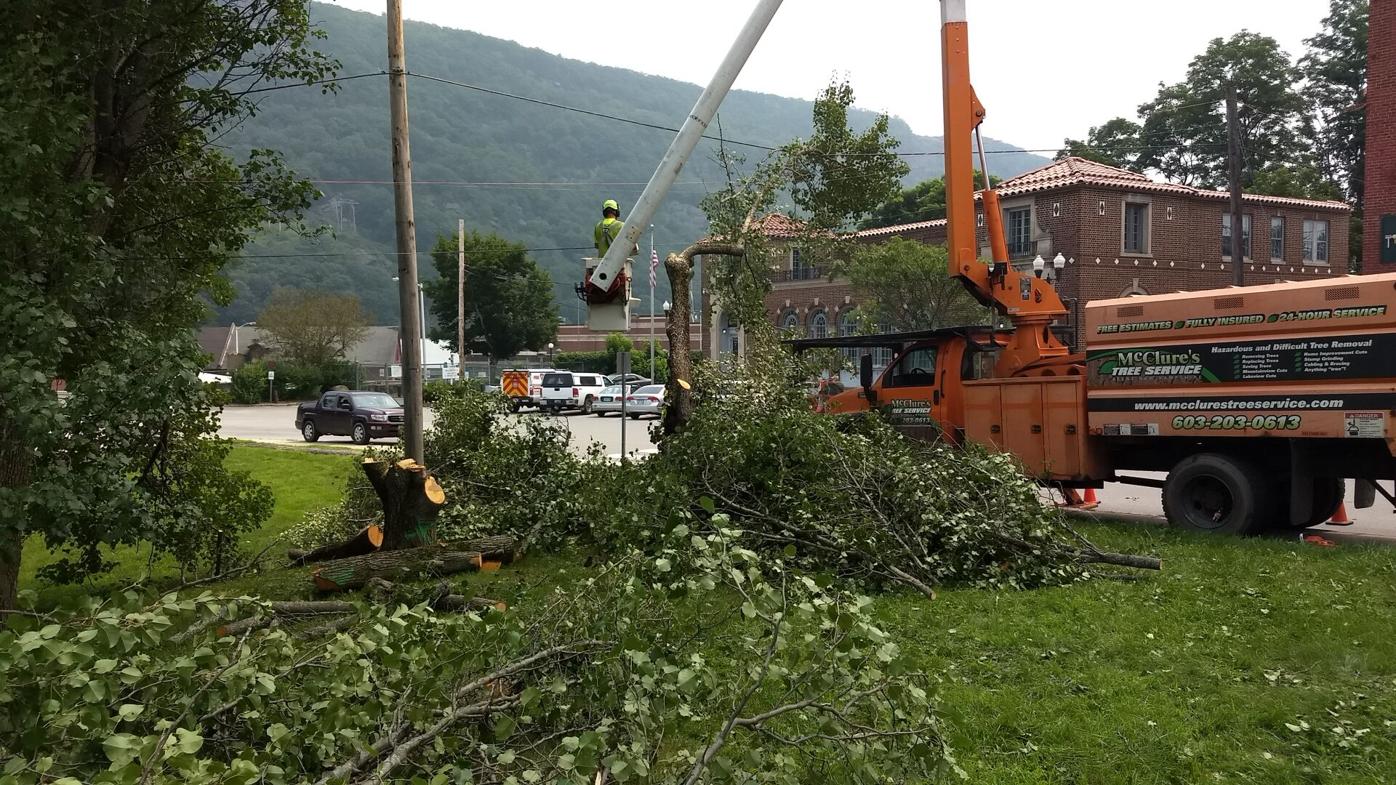 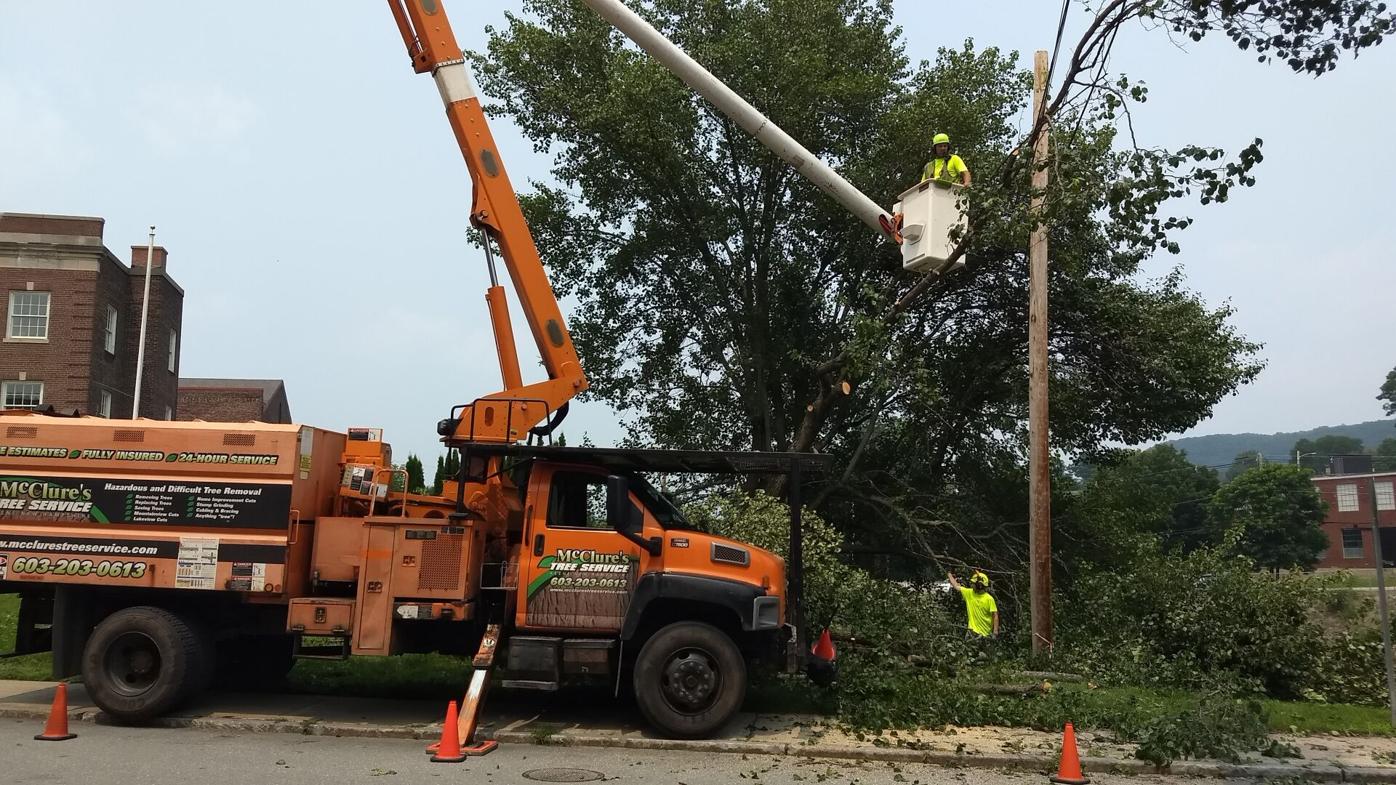 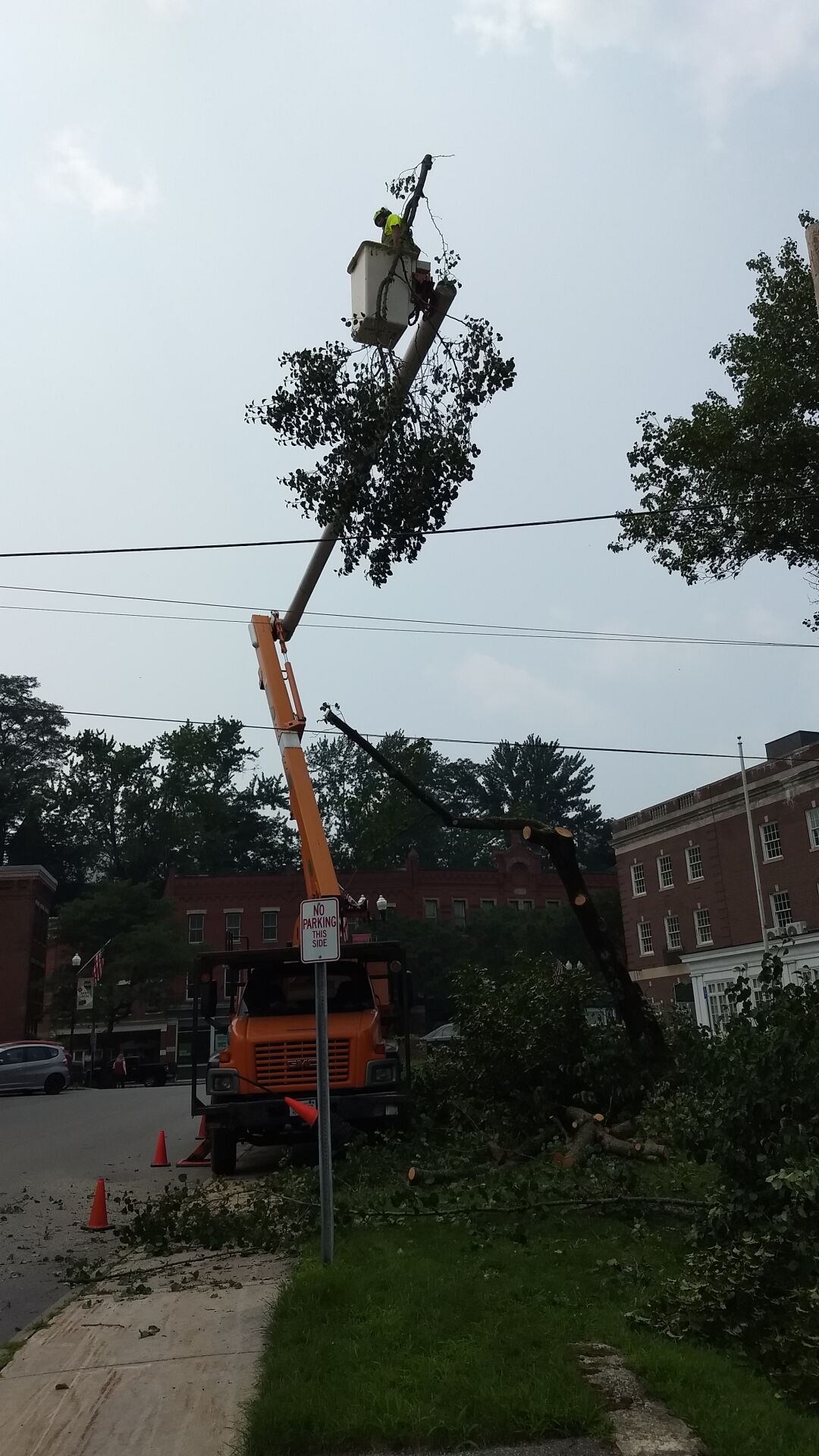 BELLOWS FALLS — Work began Tuesday on the new Brown Fuller Memorial Park, with tree-cutting crews removing overgrown linden and crabapple trees. The park will honor the memory of two Bellows Falls firefighters who died in the line of duty in 1981.

Under the watchful eye of Bellows Falls Fire Chief Shaun McGinnis, workers from McClure Tree Service of Keene, N.H., cut down all but one large little leaf linden tree, which is on property owned by Great River Hydro, whose property adjoins the park.

The two young Bellows Falls firefighters died fighting a fire at the Star Hotel on December 29, 1981, and there’s been a small park and a pair of memorial benches in honor of the fallen firefighters, Dana Fuller and Terry Brown, for decades.

The goal was not just to create a memorial, but also give the downtown village area a commons, or gathering space, for other events.

In addition to the sculptures of firefighter gear to honor Brown and Fuller, McGinnis said Tuesday, there will be a large balsam fir tree planted, which will serve as a community Christmas tree.

McGinnis said that a local man, Tom Call, had volunteered to do the site work at the new park for free, and he is expected to start work next week. McClure Tree Service also donated its time, the chief said.

McGinnis said that Call’s family had been friends with one of the fallen firefighters and had contacted him last year and offered to do the site work.

Bryan, the landscape architect, is expected to finalize the park’s design in the next week, the chief said.

McGinnis said that so far about $15,000 has been raised either through a GoFundMe page or a local fundraiser held at Flex Fitness in Bellows Falls. But he said that an additional $15,000 to $20,000 was needed to complete the park, and he said he was confident that once the community saw that work was underway, donations would come in.

“Every cent will go into making the park nicer,” he said.

He said, for instance, that an adult balsam tree costs about $5,000, and the bronze sculptures of the firefighting gear cost about $15,000.

Those sculptures are completed and now crated and will be on their way to Bellows Falls any day now, he said.

Matthew Cole, a local spokesman for Great River Hydro, said the linden tree that still remains had been pruned and trimmed, but if its presence conflicts with the overall design of the park, it will be removed.

He said the tree’s shade was necessary for events put on by The Nature Museum in Grafton that, using the fish ladder at the Bellows Falls hydroelectric dam, holds classes and events on the land, which is adjacent to the Bellows Falls Canal.

Cole said that small grassy area was in high demand for other events, and wasn’t incorporated in the initial designs of the park.

But he said that if the linden tree interfered with the overall design of the Brown Fuller Memorial Park, Great River Hydro would consider removing it.

McGinnis said he is amazed at what a difference the removal of the overgrown trees meant at the site, opening up a view of Fall Mountain as well as the historic Bellows Falls Canal.

The telephone and cable lines that currently cross the site overhead will be buried or moved. He said they are not power lines.

“There’s a lot you can see from there,” he said. “The overall vision of the park.”

He said the park will be dedicated on Oct. 10, the Sunday of the traditional Bellows Falls Fire Department’s parade, with firefighters from all over the region participating. A separate memorial service on the 40th anniversary of the fatal fire is scheduled for Dec. 29, he said.

He said the fire department struggled with the name of the park, and finally decided to honor the fallen firefighters, Brown and Fuller, rather than its location, the Star Hotel. He said many people refer to it as the Star Hotel Park.

He said Paul Olesniewicz, a retired Arizona firefighter, and his firm, 911 Sculpture, created the bronze statutes of a firefighters’ turnout gear, including jackets and helmets.

“This has been talked about since 1984. Thirty seven years later, something is actually happening,” McGinnis said.

The link for the Go Fund Me page is https://www.gofundme.com/f/the-brownfuller-memorial-park.