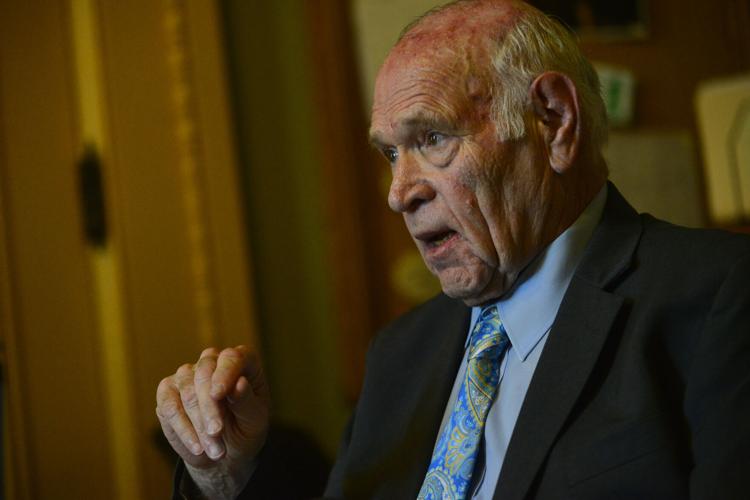 State Sen. Dick Sears of Bennington talks during a committee meeting at the Statehouse in Montpelier in January of 2020. 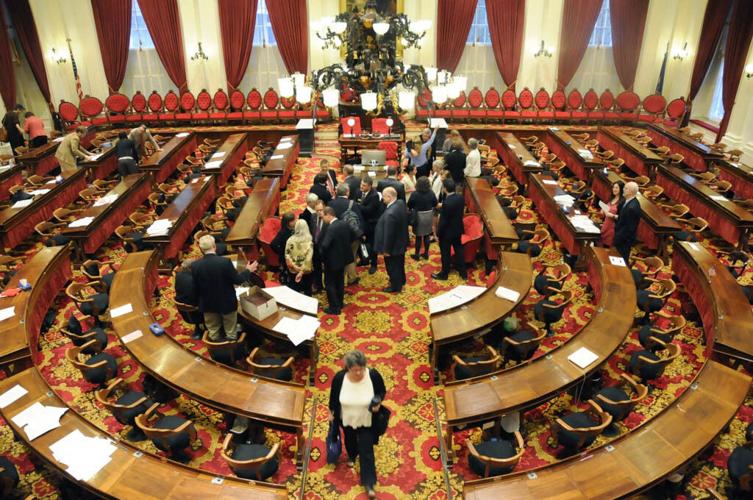 The Vermont House is scheduled to hold a rare floor session on Monday as the General Assembly prepares to adjourn by the end of the week. 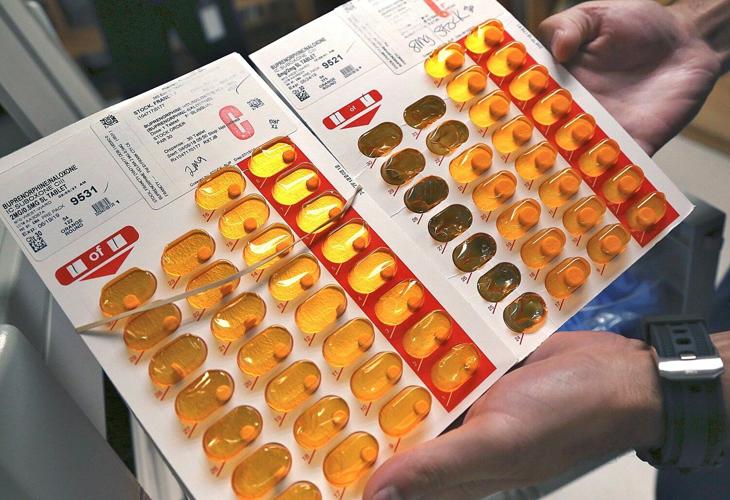 A nurse displays tabs of buprenorphine, a drug that controls heroin and opioid cravings. Last week, the Vermont Senate passed a bill decriminalizing therapeutic amounts of the opioid medication, also known by the brand name Suboxone.

State Sen. Dick Sears of Bennington talks during a committee meeting at the Statehouse in Montpelier in January of 2020.

The Vermont House is scheduled to hold a rare floor session on Monday as the General Assembly prepares to adjourn by the end of the week.

A nurse displays tabs of buprenorphine, a drug that controls heroin and opioid cravings. Last week, the Vermont Senate passed a bill decriminalizing therapeutic amounts of the opioid medication, also known by the brand name Suboxone.

Will the Vermont General Assembly adjourn and go home by the end of this week?

The first, best hint of whether the Legislature will be able to close out its Zoom screens as scheduled comes Monday, as the six-person budget conference committee, including Sen. Dick Sears, D-Bennington, gets back to work on the state budget, and the House holds a rare Monday floor session.

The budget committee has been meeting for about a week, with the House and Senate conferees joined at the virtual table by members of Gov. Phil Scott’s cabinet, including Administration Secretary Susanne Young and Finance Commissioner Adam Greshin on Friday.

The conference committee is due to resume at 11 a.m. Monday, and you can watch them in action here.

The significant hurdle between the Legislature and Gov. Scott remains how much American Rescue Plan Act (ARPA) funding is being allocated by the Legislature, and how.

Another wrinkle has emerged: There’s new federal guidance on the use of ARPA dollars which, according to the Scott administration, limits whether the state’s $1.3 billion windfall from that bill can be used on housing, child care and economic development in the budget. That guidance — which is not yet etched in stone — may require some swapping out of ARPA funds for general fund revenues in the spending plan.

But Rep. Mary Hooper, who chairs the House Appropriations Committee, said Sunday that there’s a path to reconciling the budget and reaching agreement.

The Legislature has proposed spending nearly half of the state’s ARPA haul this year; Scott wants to spend it over four years.

Hooper said the Legislature and the administration share overarching goals that the money helps transform the state as it emerges from a year unlike any other in its history.

“We are supportive of the governor’s proposals,” Hooper said. “We’re just focused in addition to the well being of people and their recovery from the pandemic.”

The hope, Sears said, is that the committee can complete its work in the next two days and get to a compromise by Tuesday night.

For one-stop shopping on all things Fiscal 2022 budget, the Legislative Joint Fiscal Office has an up-to-date page of links including Gov. Scott’s initial proposal, the versions passed by the House and Senate, and the current status of budget line items and where they stand. Here are the differences as of Thursday, but keep in mind this is a fluid and fast-moving process.

Sears remains concerned about the amount of relief in the budget for the hospitality industry, which has been hard-hit by the pandemic.

“They feel like they’ve been shut out of this round,” Sears said. He’s trying to attach some language to H. 159, now in the Senate, to address those needs.

Sears is also working to find funds for adult day care programs such as Bennington Project Independence, and to increase base bunding for clinician salaries for mental health providers such as Bennington-based United Counseling Service.

“UCS is hurting for clinicians,” Sears said. “They have openings but they can’t fill them at the salaries they can pay.”

In addition, Sears would also like to see additional relief money included for independent colleges, given how their finances have been damaged by the pandemic.

It would be one thing if the budget was the only game in town. But several additional priorities are approaching the finish line at the same time.

The House notice calendar points to a jam-packed session on Tuesday, with significant issues awaiting second reading votes: S. 13, the per-pupil weighting formula implementation bill; S. 25, proposing miscellaneous changes to the state’s new cannabis tax and sale laws, including if and how cannabis products are advertised; and S. 101, a smart growth bill being presented by Rep. Seth Bongartz, D-Bennington 4.

So far, three other bills are bound for conference committee: H. 449, the pension governance and reform task force bill; H. 360, the broadband expansion bill; and H. 433, the miscellaneous transportation bill.

Southern Vermont has a stake in all of these discussions.

While there’s not a schedule posted for the pension bill committee, there will be two lawmakers working on that issue. From the House, Wilmington Rep. John Gannon, D-Windham 6, joins Reps. Sarah Copeland Hanzas, D-Orange 2, and Robert LaClair, R-Washington 2; on the Senate side are Putney’s Sen. Jeanette White, D-Windham, Sen. Anthony Pollina, D/P-Chittenden, and Sen. Brian Collamore, R-Rutland.

If you’re wondering how this works, here’s a quick reminder: Committees of conference are formed when the House and Senate return different versions of the same bill, and the differences are too significant to hash out via typical legislative tennis.

The House and Senate both send three representatives to a committee tasked with reaching an agreement from the committee of jurisdiction, with lawmakers from multiple parties. If agreement is reached, the two houses must vote the results of that compromise up or down by simple majority, with no amendments.

This is the intersection where facts, ideas, principles and politics converge, and the details all matter.

The Senate’s passage last week of H. 225, a bill decriminalizing therapeutic amounts of the opioid medication buprenorphine (also known by its trademark name Suboxone), has Sears thinking about the way the state is addressing its opioid crisis.

“It’s an indictment of our treatment system that people have to rely on street purchases of a treatment drug” to stay off heroin and other opioids, Sears said. “I think it tells me we have a long way to go in dealing with our opioid crisis.”

During testimony, Sears heard that people who are fighting addiction are not likely to go to the emergency room and wait for hours to be prescribed a dose of Suboxone. That’s a significant factor in Bennington, where the closest clinics prescribing methadone are in North Adams, Mass., Greenfield, Mass., or Brattleboro.

“As much as Vermont pats itself on the back for the hub and spoke model, that bill told me a lot about where we’re at,” Sears said.

In particular, Sears was appreciative of Julia Larson, of Bennington’s Turning Point Recovery Center, for her testimony before the Senate Judiciary Committee.

The bill is now headed back to the House for concurrence. It’s on the notice calendar for Tuesday.

Floor and committee proceedings are online for you to stream live or watch whenever you like. You can watch any House or Senate proceeding by going to the committee’s page and clicking on the livestream link, or the agenda. You can find listings of committees and their agendas here.

Note: Keep checking back this week, as schedules are subject to change given the work that needs to be completed.