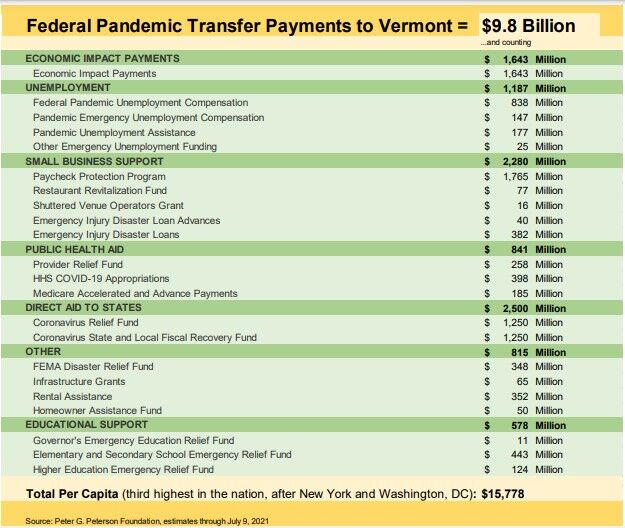 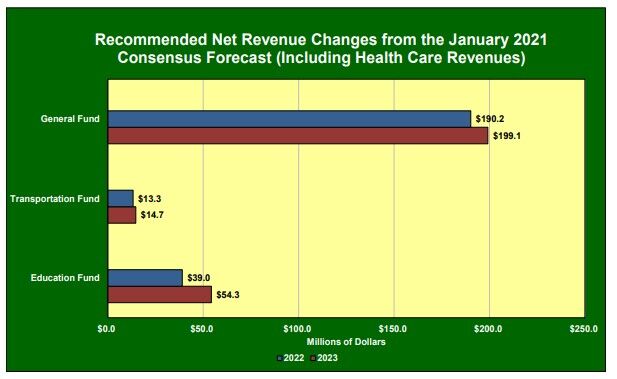 This chart shows consensus tax revenue projections as compared to projections made in January. 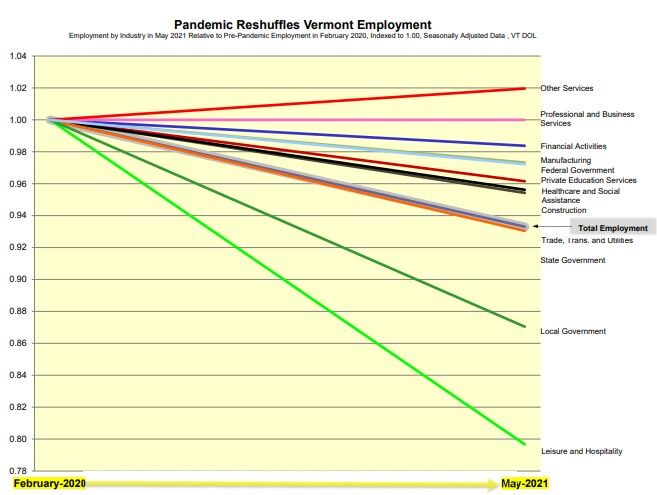 This chart shows how employment levels have changed between the start of the COVID-19 pandemic began and this summer, with the leisure and hospitality industry seeing the most significant change.

This chart shows consensus tax revenue projections as compared to projections made in January.

This chart shows how employment levels have changed between the start of the COVID-19 pandemic began and this summer, with the leisure and hospitality industry seeing the most significant change.

The state’s chief economists are forecasting continued increases in tax revenue for fiscal 2022 and 2023, but warning that unpredictability from the COVID-19 pandemic and the yet-to-be determined consequences of massive federal deficit spending might affect the state’s recovery.

That’s based on trends seen over the past 12 months, in which nearly every class of revenue collected by the state, with the exception of gasoline taxes, exceeded projections that were revised when the pandemic largely shut down the state’s economy.

The saving grace, the state’s economists said in reports presented Friday to the Emergency Board and the Legislative Joint Fiscal Committee, is the massive injection of federal relief dollars allocated to Vermont — a whopping $9.8 billion in federal aid. That works out to a per-capita figure of $15,778 per Vermonter, the third-highest among all 50 states and the District of Columbia. It also equates to or roughly 27 percent of the state’s per capita personal income of $58,650 for calendar 2020.

In the economic review and revenue forecast update, the economists said that extensive fiscal and monetary support “is expected to combine in FY22 to create the highest nominal economic growth in Vermont (9.2 percent) and the nation (10.1 percent) since the 1980s. GDP growth in FY23 will slow to about half that of FY22, but still be among the best years in the last two decades.”

The growth in General Fund revenues was spurred by personal income tax receipts, which, according to preliminary figures, exceeded $1 billion in fiscal 2021, the first time income tax revenues have crossed that threshold. “When final 2020 tax year data are available after final payments are made in October of this year, we will know more about the composition of the tax filings and sources of income,” the economists said.

Perhaps the most surprising aspect of the healthy revenue results and forecast is that they took place in an economy where significant workforce shortages remain, the consensus forecast said. After all, the state lost 63,500 nonfarm payroll jobs due to the pandemic in spring of 2020, and remained 19,200 nonfarm payroll jobs short of pre-pandemic levels, the report said.

“In fact, a cumulative job loss of more than 6 percent in nonfarm payroll jobs across the state’s labor markets would ordinarily be a cause of great alarm, and would hardly be expected to result in a consensus forecast upgrade of any kind,” the report said.

While forecasting growth in revenue ahead, the economists also identified potential downsides:

• The massive infusion of federal spending, at levels not seen since the end of World War II, has led to the federal budget deficit, which had already ballooned during the Trump administration, surging past $3 trillion last fiscal year.

The economists noted that there are two schools of thought about what this means: Some are worried about the size of the national debt, while others argue the U.S. should not be constrained by deficit spending when needed.

• While additional infrastructure dollars are likely, “at least some of the federal assistance programs that have been providing pandemic relief-support over the last year and one half will be ending in the near-term future—the new refundable child credit notwithstanding,” the consensus forecast said.

It remains to be seen what happens when that spending ramps down or disappears entirely, the forecast said. It “will likely have an out-sized impact on state revenue collections and the performance of the U.S. and State economies—especially as the time frame moves to the out-years of the forecast update time horizon.”

• The economic review and forecast update warned that despite the positive impact, “the costs associated with this unprecedented spending will reverberate through the federal budget for many years, driving the federal deficit to record levels, adding significant interest expense, generating higher levels of inflation, and possibly slowing future growth as the economy is ultimately weaned off this support and deals with the bill.”

The consensus forecast also addresses inflation being seen so far, and whether it might turn into a long-term problem.

If supply shortages and higher prices in areas such as housing and auto manufacturing prove to be persistent problems, “then the current bump up in inflation rates could turn out to be supportive of a more harmful, self-reinforcing wage price spiral,” the forecast said. “This is currently of concern because financial markets realize that Federal Reserve’s principal tools to manage inflation and inflation expectations are mainly demand side-oriented, and raising rates in the face of supply side shocks (e.g. to fight ‘bad inflation’) can actually accentuate the economic damage and make future inflation too low,” as was the case in Europe in 2007 ahead of the Great Recession.

“The hope is that the Fed will resist raising short term interest rates against the backdrop of ‘constricted supply’ and that the Fed will only tighten monetary policy in the U.S. when it sees a priced surge that can fuel a self-reinforcing cycle of wage and price inflation,” the report said. “Currently, it is apparent that many actors in U.S. financial markets do not yet see the self-reinforcing price pressures that could result in a self-supporting wage and price escalation cycle.” That could lead to what is known as stagflation — a period of stagnant economic growth paired with high unemployment and high inflation, as experienced in the 1970s.

The economic review said low interest rates and increases in wealth and income are poised to continue fueling Vermont’s red-hot real estate market and increasing the price of housing through fiscal 2022. Data from the first three months of 2021 shows housing prices rising in most states, with year over year growth in Vermont at 8.4 percent, the report said.