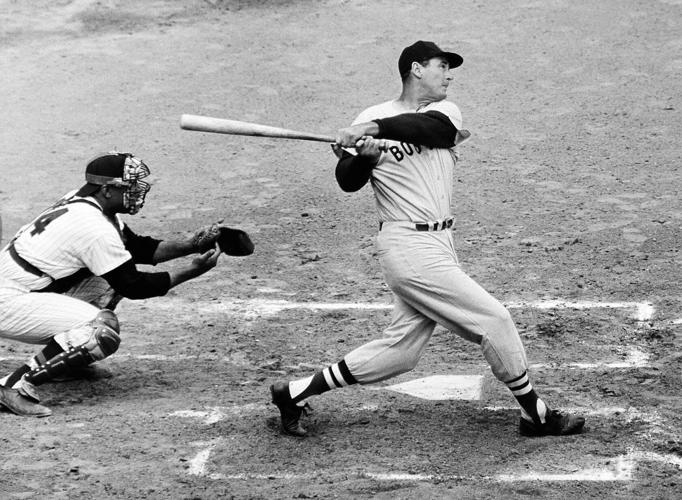 In this April 18, 1960, file photo, Ted Williams of the Boston Red Sox homers against the Washington Senators in Washington. "The greatest hitter that ever lived" made a difficult skill look easy. 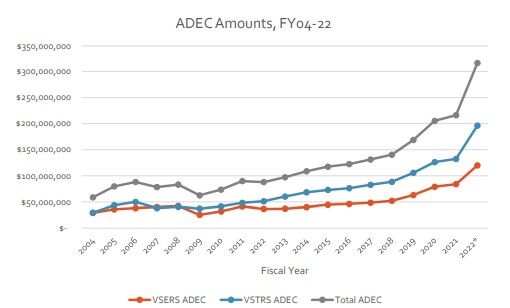 This chart shows how Actuarially Determined Employer Contributions (ADEC) have increased for the state employees and state teachers’ pension funds from fiscal 2004 through fiscal 2022. 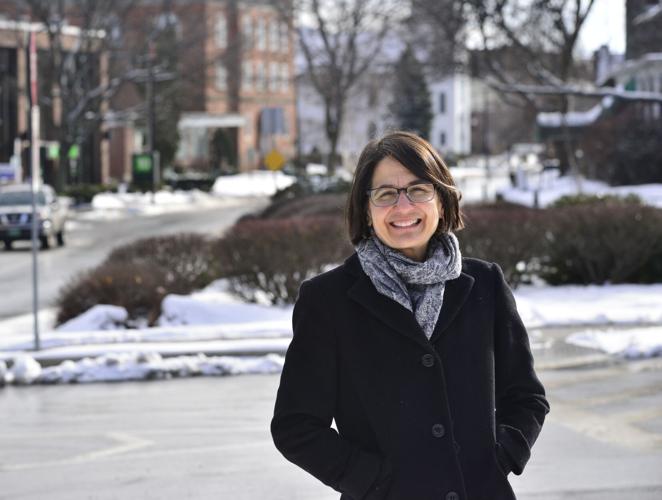 In this April 18, 1960, file photo, Ted Williams of the Boston Red Sox homers against the Washington Senators in Washington. "The greatest hitter that ever lived" made a difficult skill look easy.

This chart shows how Actuarially Determined Employer Contributions (ADEC) have increased for the state employees and state teachers’ pension funds from fiscal 2004 through fiscal 2022.

In honor of baseball’s Opening Day last week, I’ll start with a question: What does hitting or pitching a baseball have in common with solving the state’s pension funding crisis?

The answer? If it was easy, anyone could do it.

When I was a would-be high school baseball player, I read “The Art of Pitching” by Tom Seaver and “The Science of Hitting” by Ted Williams, hoping their Cooperstown-quality guidance would help me make the varsity roster.

“Would-be,” because I lacked the athletic ability to turn their sage advice into a spot on the squad.

Likewise, if solving the state’s unfunded pension liability was simple, that gap would not have grown to $5.6 billion, including pensions and health benefits, and the repair effort would not have required a political reboot after a week and a half of hurt feelings and angry rhetoric.

House Democrats led by Speaker Jill Krowinski have been given credit for having the guts to tackle this ginormous problem. But they took a lot of grief, too. Friday, with anger over the proposed solution growing among the state’s labor unions, and the enormity of the task coming into focus, Krowinski and leadership opted to change strategy. They’ll address governance of the system now, and establish a task force to advise a solution on benefits for next year’s session.

It’s easy for folks to say they’re “disappointed” by this turn of events. But again: If this was easy, someone would have done it by now. This presentation by Chris Rupe of the Joint Fiscal Office lays out the scope of the problem.

Like Audrey II, the murderous singing houseplant of “Little Shop of Horrors,” the state’s pension gap has a seemingly endless appetite and has only grown larger and more threatening over time. The state already plans to pour $300 million into that obligation in the fiscal 2022 budget — and that’s apart from a $150 million down payment the House proposed in its fiscal 2022 budget.

Maybe ballplayers earn that kind of cash these days, but $350 million is an enormous amount of money. And once it’s spent on the pension, it can’t be spent on broadband, or child care, or the opiate crisis, or addressing systemic racism, or fixing the per-pupil weighting formula, or workforce development, or a thousand other needs.

“It is critical for the state’s economic future to fix this problem,” Krowinski said Friday.

• The initial plan floated by the Government Operations Committee wasn’t a contract proposal per se. But it can easily be seen that way, since it speaks to employment benefits. And if you’ve ever bought a house or taken part in contract talks, you know negotiations rarely start at middle ground.

The employees and their union leaders also know this is a negotiation, and they know the pensions face an uphill climb to long-term solvency. But many workers were taken aback by the terms of the opening offer — especially the number of years teachers, police and corrections officers would have to work to be fully vested. Those terms drove a lot of the anger lawmakers heard.

• If the Democrats want to bring Gov. Phil Scott into the fold, incorporating aspects of proposals floated by Republicans might be a place to start. State Rep. Scott Beck has offered a pair of proposals as bills, including the option of starting a new pension fund and gradually retiring the old one (and its debt). And Government Operations Committee member Samantha Lefebvre presented a defined contribution plan proposal offering a hybrid annuity that would behave a lot like a traditional defined benefit plan.

Then again, Democrats and state Treasurer Sue Pearce are opposed to switching to a defined contribution plan for a number of reasons. A change of heart on that score seems unlikely at this juncture.

MEANWHILE, IN THE SENATE ...

While the focus on the pension drama has been in the House, Senate leaders including President Pro Tempore Becca Balint have been involved behind the scenes. Balint said she’s been in constant contact with Krowinski over the past weeks.

There’s a balance that must be maintained between workers getting what they were promised, and keeping the system viable for those workers and future retirees, Balint said.

“Both those things are true, it’s not an either-or,” she said. “And in order to try to get to a sweet spot that is meeting both of those needs, it may be there has to be additional revenue raised. And that’s one of the things that I know, in speaking together with Jill, this past week, that’s something that we both wanted in the task force language. And it has to be on the table.”

The legislature knows Scott isn’t afraid to use his veto pen. “But I also think we ought to try to meet this obligation to employees, making it as painless as possible for those people who are counting on those retirement funds,” Balint said.

“My biggest regret from all of this is that the timing of this was so crappy for everybody,” Balint said. “And we had what we thought was an opportunity with the additional one-time [federal] money. You know, maybe if we can make a big investment at once, while doing some of the structural change, we might be able to get something through the legislature. But it’s clear that that was overly ambitious, and optimistic.”

With about two months left in the Legislature’s calendar, the fiscal 2022 budget is now in the Senate’s hands. Balint sees one potential difference between the House proposal and what the Senate is likely to approve: the $650 million in American Rescue Plan Act (ARPA) funds the House folded in.

“Not everyone in the Senate is as comfortable with the amount of ARPA funds that the House has pledged to spend right out of the gate,” Balint said. “We feel like we’d like to know a little bit more about the guidelines that are going to be coming down, which now unfortunately, for us, probably are not going to happen until second or third week in May at the earliest. But we have more time with these funds. So I would want to make sure that any ARPA funds that we need to expend are absolutely things that are time specific.”

• A busy week with lots of Act 250-related content awaits the House Natural Resources, Fish and Wildlife Committee. Tuesday morning the panel will look at a committee bill addressing water quality and solid waste disposal, among other topics.

• Tuesday afternoon, Balint visits the committee to walk through S. 101, which would extend and expand the Downtown and Village Center Tax Credit Program to neighborhood development areas, and remove the requirement for state water or wastewater permits where the town or city has issued a permit.

• In the Senate Finance Committee, it’s all high-speed broadband, all the time this week as the panel takes up H. 360, the bill passed by the House last month. The committee’s work starts Tuesday afternoon, and Department of Public Service Commissioner June Tierney is due to testify at 1:30 p.m. Wednesday.

• One of the key sticking points for addressing racial bias in policing in Vermont is the ability of agencies to collect and report accurate data on law enforcement interactions with people, from juvenile interactions with police in schools to vehicle stops, plea agreements and the use of force. H. 317, whose sponsors include Rep. Sara Coffey, D-Windham 1, would create the Bureau of Racial Justice Statistics and the Bureau of Racial Justice Statistics Advisory Panel “to collect and analyze criminal justice data in order to identify and address racial bias in the criminal justice system.”

A powerhouse panel has been invited for testimony starting at 9 a.m., including Etan Nasreddin-Longo, chair of the Racial Disparities in the Criminal and Juvenile Justice System Advisory Panel (RDAP); The Hon. Brian Grearson, Chief Superior Judge of the Vermont Judiciary; and Xusana Davis, Executive Director of Racial Equity. The Senate Judiciary Committee will be sitting in as well.

• At 9 a.m., the House Judiciary Committee takes on S. 3, which would allow law enforcement to have more access to information about persons found incompetent to stand trial or not guilty by reason of insanity. Judge Grearson, Vermont Medical Society president Simha Ravven, M.D., and state defender general Matthew Valerio are among invited witnesses.

Ideas flow in on alternatives to initial pension reform plan

MONTPELIER — It was nearly unanimous: The teachers and state employees testifying before the…