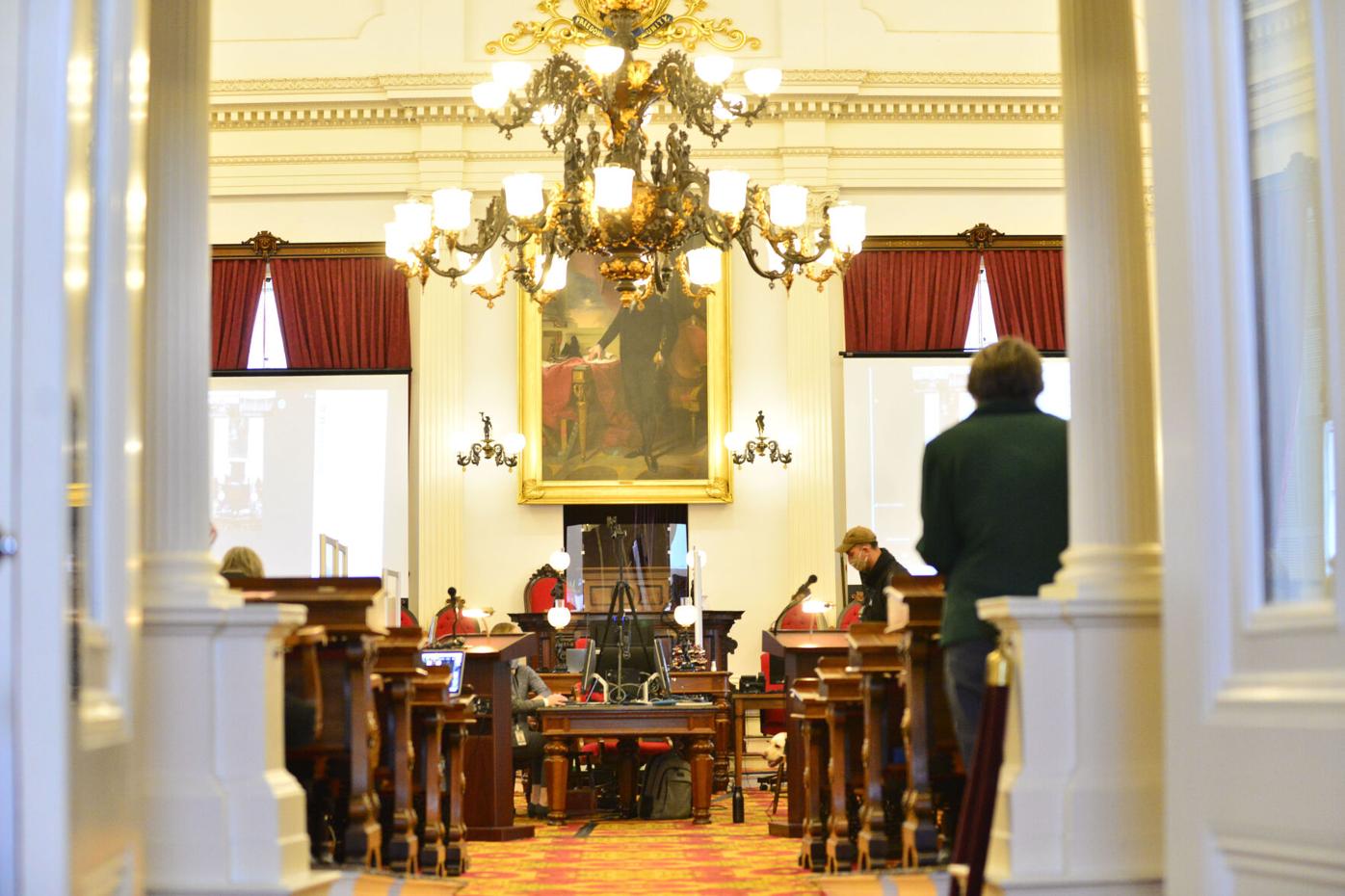 First day of the legislative session at the Vermont Statehouse in Montpelier. Only leadership is working in person as the session begins.

This table shows the consensus revenue forecast for fiscal 2021-23.

First day of the legislative session at the Vermont Statehouse in Montpelier. Only leadership is working in person as the session begins.

This table shows the consensus revenue forecast for fiscal 2021-23.

Gov. Phil Scott’s budget address has been moved up from last week to Tuesday at 1 p.m. before a virtual joint session of the Legislature.

In his inaugural address, Scott hinted at a mix of targeted investment and fiscal restraint in his spending plan, as well as a restructuring of the state’s education bureaucracy. We’ll see what is and isn’t included — and then hear what people think.

Speaking of fiscal matters, the House Appropriations Committee, which includes Rep. Tristan Toleno, D-Brattleboro, is holding a public hearing on the annual budget adjustment act Monday at 12 p.m. The budget adjustment act is an annual bill which allows the governor to propose changes to the state’s spending plan, as well as address deficits where needed. Tune in here.

As we learned last week, tax revenue has been a good deal healthier than predicted this summer, and the massive $4 billion injection of federal funds into the state economy is getting the credit for that welcome boost.

But the economic picture provided for the state Emergency Board on Tuesday wasn’t all rosy. The forecast warned that Vermont is seeing a “K-shaped” recovery, in which some sectors are seeing a quick rebound while others are struggling.

Economists also provided warnings about potential difficulties awaiting in fiscal 2023, when it’s likely the federal government will no longer be doling out massive relief checks. We’re likely to hear more about both looming issues on Tuesday — and perhaps, about the state’s multibillion dollar unfunded pension liability.

One of the proposed remedies for pension cost growth — limiting future cost of living adjustments — has met with negative reviews from the state’s largest employee unions.

State Rep. Linda Joy Sullivan, D-Dorset, commended State Treasurer Beth Pearce for focusing attention on the problem. “[Pearce] is correct when she says that inaction is no longer an option,” Sullivan said.

Sullivan said the Legislature must act this year, and not with a study committee or a consultant’s report.

“We no longer have the luxury of time to accommodate a business as usual approach in Montpelier. We need to take action to begin cutting our losses starting in 2021,” she said.

State Senate President pro tempore Becca Balint, D-Windham, understands why the Vermont State Employees Association and NEA-Vermont were not thrilled by the COLA proposal. (VSEA is still reviewing the proposal but got negative feedback from members; NEA-VT said no, and suggested progressive taxation on the wealthy instead.) “It goes to the heart of who we are as human beings. We want to know we’re taken care of in our old age,” Balint said.

Balint, who said she discussed the issue at length with Pearce, added that several Senate committees will be working on the problem. “I think all understand we have to do something so [the pension is] not insolvent,” she said.

The Senate Government Operations Committee is scheduled to discuss the report Thursday afternoon.

Tuesday, after the governor’s address, and again on Wednesday, the House Government Operations Committee will begin work on Scott’s proposal to merge the Department of Public Safety, the Vermont Enhanced 911 Board, the DMV Enforcement Division, the Department of Fire Safety and Emergency Management, and oversight of the Criminal Justice Council under a single agency. The Senate Government Operations Committee will have a look Wednesday afternoon, and will also discuss elections, juvenile justice records and the Criminal Justice Council.

• The Senate Judiciary Committee takes up how and where the state will replace the now-closed Woodside juvenile justice facility on Tuesday. Wednesday, a full day of testimony on a bill barring firearms from government buildings, hospitals and child care facilities is planned.

• The Senate Education Committee takes up a bill outlining the proposed reorganization of of the Vermont State Colleges System on Thursday. On Wednesday, the panel will discuss S. 16, a bill creating a School Discipline Advisory Council that would collect and analyze data to guide best practices locally and across the state.

• Wednesday morning, in recognition of Homelessness Awareness Day, a joint session of the House General, Housing and Military Affairs and Human Services committees will hear from human service agencies and advocates for the homeless.

The House Human Services agenda for the week hints at what Gov. Scott is planning for his Tuesday budget address. Friday’s committee schedule leaves room for the “Governor’s Proposed Childcare Plan,” with Department for Children and Families Commissioner Sean Brown.