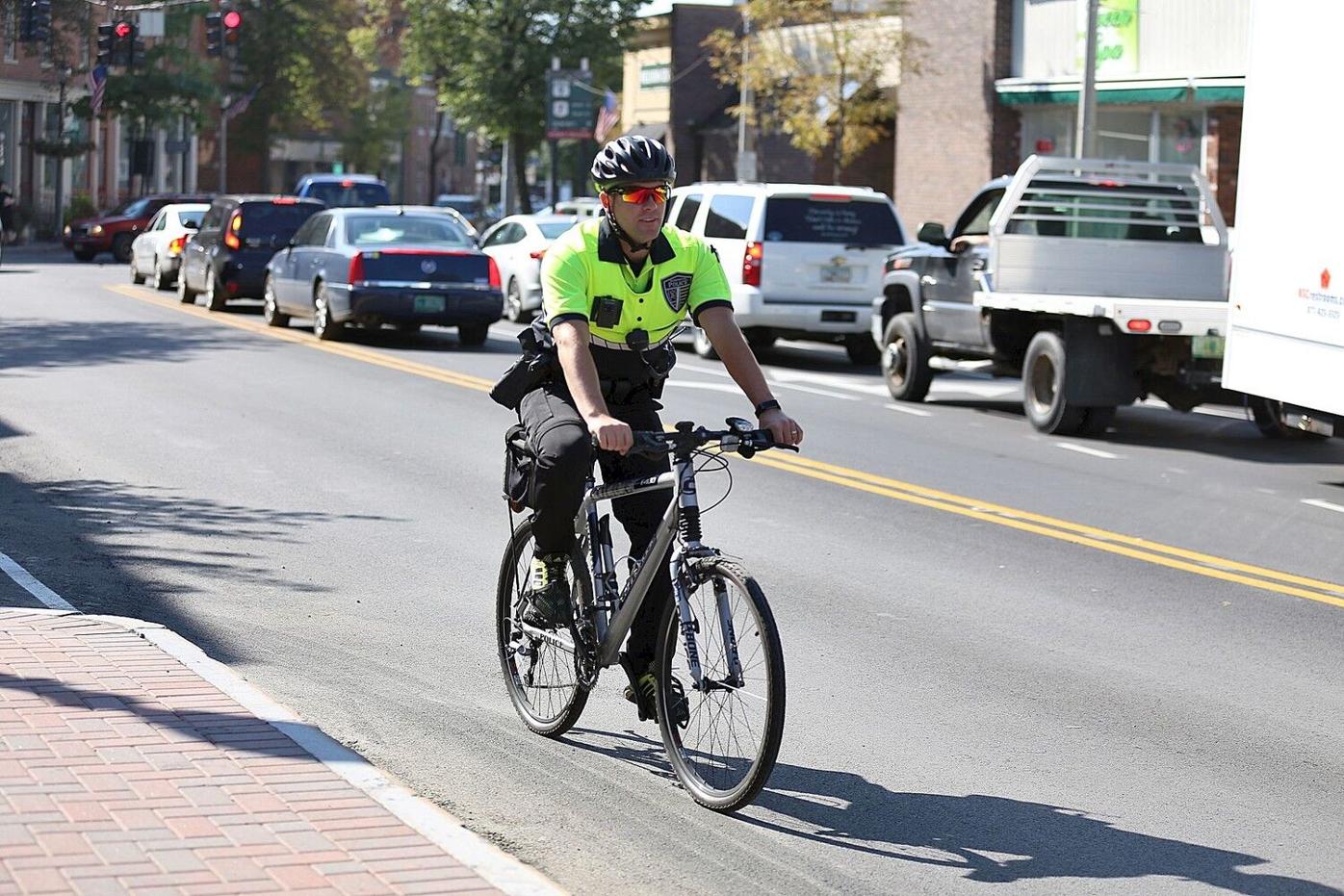 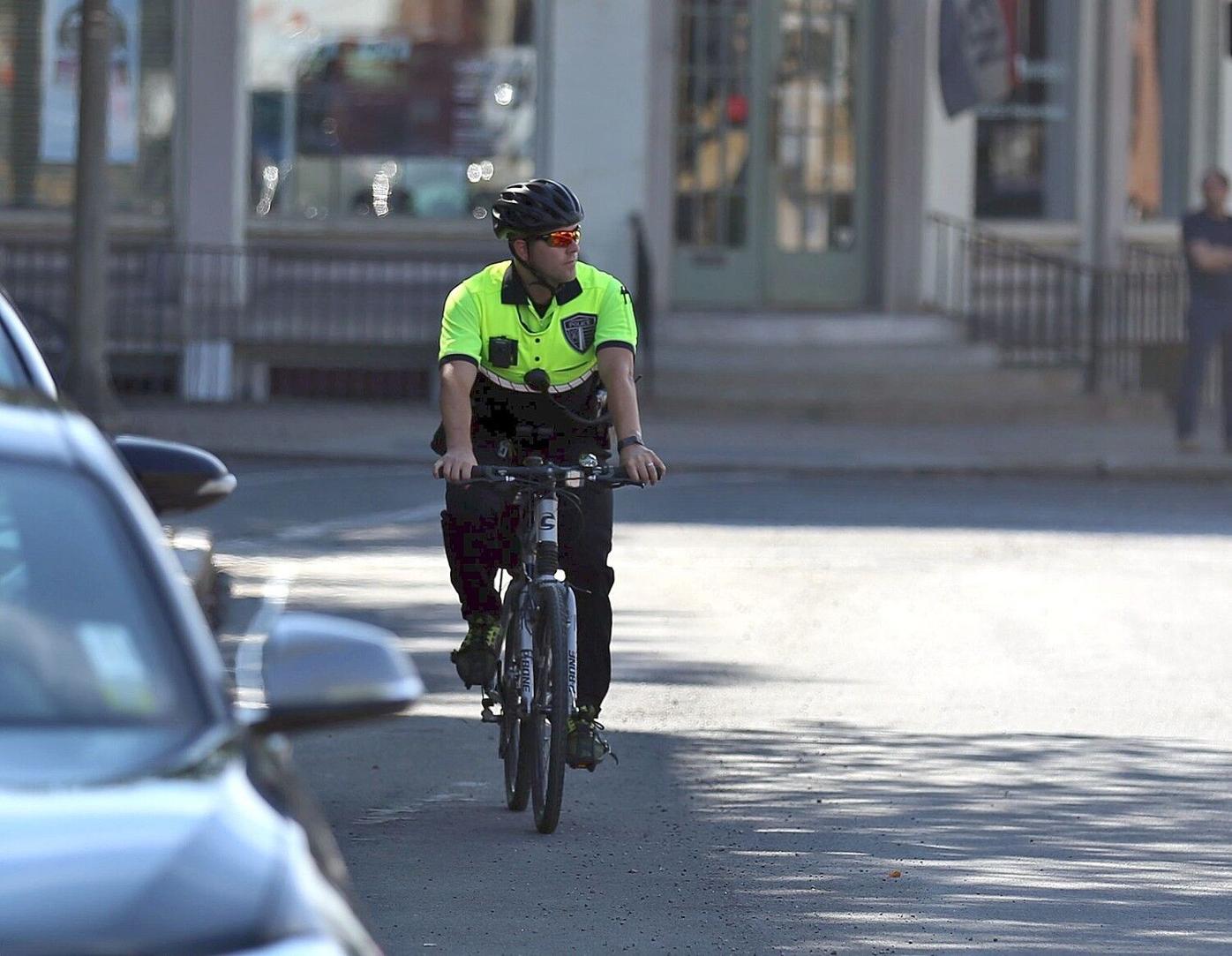 Sleasman is one of four members of the Bennington Police Department certified for bike patrol.

Sleasman is one of four members of the Bennington Police Department certified for bike patrol.

BENNINGTON — While the Bennington Police Department's police bikes are stealthier than cruisers and better on gas mileage, those aren't the main reasons BPD resurrected its Bicycle Patrol Unit program.

The bikes also help police interact more with their community.

"It helps us break that barrier between the cruiser door and the public and the community," said Officer Stephen Sleasman, who is one of the four members of the BPD currently certified for bike patrol.

BPD began its bike patrol in the mid 1990s, but lack of manpower led the program to sit dormant until recently, said Police Chief Paul Doucette.

Now that the police staff is growing again, the department sent Sleasman and three other officers to become certified after they expressed interest in the program. Bike patrol officers perform the same essential duties as an officer in a cruiser and carry all of the same gear.

The other two officers were certified at a program in Burlington, and Doucette says there is currently a wait list of officers interested in attending bike patrol school. He plans to send two more officers in the spring.

Doucette says the course teaches "a lot of common sense" bike safety, but also how officers can ride up and down steps, handle rough terrain, and know when to avoid certain terrain if it's not safe.

"There's a lot of things people don't realize that you can do with a bike," Doucette said.

All four certified officers typically aren't patrolling on bikes at the same time except for large town events like the Battle Day Parade.

A day in the life of Bike Patrol

"Ninety percent of my day on the bike, I'm not enforcing laws so to speak; I'm not chasing down cars," Sleasman said.

The farthest Sleasman travels on the bike is Northside Drive and Benmont Avenue, but he mainly stays in the immediate downtown area. If there's a cruiser available, sometimes he will drive it and his bike to North Bennington and ride there.

Bike patrol gives Sleasman a chance to slow down and interact with the community, and he enjoys how community members frequently approach him and chat, whether they're talking about law enforcement-related topics or not.

"I haven't met a person that hasn't been happy with bike patrol," he said. "I've had high fives, I've had handshakes, I've had thumbs up, and just people generally interested in policing."

"The kids love it," Sleasman said.

Not only does it help establish positive police relationships with younger children, it gives officers a chance to teach bike safety. Sleasman can point out his helmet and encourage others to do the same. Bike patrol officers have also taken the initiative to hand out helmets to kids at certain events.

In addition to a helmet, bike patrol officers stay safe by wearing a bright yellow-green high visibility uniform that reflects at night. While these officers may be slightly more colorful than a patrolman in a cruiser, they still wear all normal police duty gear. Also, the bike is fitted with a white light on the front and a blinking red light on the back for maximum visibility.

Blauer Manufacturing, a police uniform manufacturer based in Boston, sent a sample of the bike patrol outfits to BPD, with only one request that the officers review the products.

"It's really great and it's good exercise too," Sleasman said. "I have a good time with it and you get to see a different side of Bennington, that's for sure."

Bike patrol officers are quickly realizing the benefits of riding. For example, officers can cut through parks and parking lots, accessing places a police cruiser cannot.

"[The bike] allows me to patrol more stealthily," Sleasman said.

Typically, an officer will ride his bike up to a car, knock on the window, introduce themself, and ask for the driver to pull over. If a driver is seen violating a law, an officer will wait for the vehicle to slow down at a stop sign or stop light instead of attempting to pursue a vehicle with a bike.

"I'm fast but I'm not that fast," Sleasman laughed.

So far, officers have not experienced any issues with people taking advantage of biking officers and trying to drive away. However, last week, a bike patrol officer was able to make a successful DUI arrest.

While the patrol won't ride in the snow and ice throughout the winter, bike patrol will be back in the spring after a winter hiatus.

"My goal is to keep the officers out until the first part of November," Doucette said.

"I think we're definitely going to build on it," Sleasman said. "I think there's a lot more that can happen with this."