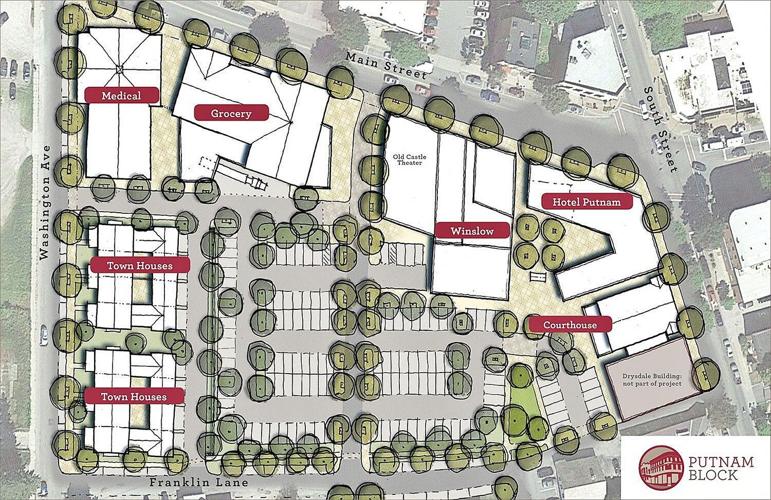 A design of the four-acre Putnum Block site in downtown Bennington as envisioned after a proposed $53 million redevelopment project planned by Bennington Redevelopment Group, a local consortium of organizations, businesses and private investors. 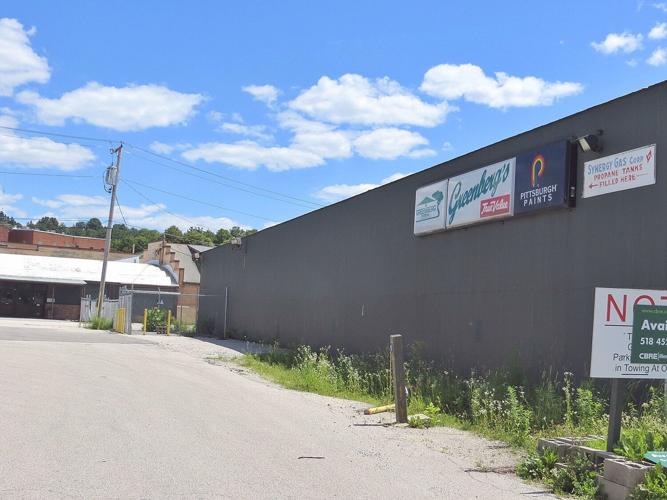 The former H. Greenberg & Son hardware store and lumber yard buildings are slated for demolition as part of the $53 million Putnam Block project in downtown Bennington and bids for the work are being sought. That work plus an announcement of new investment money for the project have developers predicting a 2018 start for the project's first phase.

A design of the four-acre Putnum Block site in downtown Bennington as envisioned after a proposed $53 million redevelopment project planned by Bennington Redevelopment Group, a local consortium of organizations, businesses and private investors.

The former H. Greenberg & Son hardware store and lumber yard buildings are slated for demolition as part of the $53 million Putnam Block project in downtown Bennington and bids for the work are being sought. That work plus an announcement of new investment money for the project have developers predicting a 2018 start for the project's first phase.

BENNINGTON — The Putnam Block developers are clearly grinding out the complex financing package for phase one of the proposed $53 million downtown redevelopment project.

But just when Benningtonians will see an end-zone celebration dance remains uncertain. The target date, which has yet to be nailed down, is sometime before the end of 2018.

The revitalization of four central downtown acres around the former Hotel Putnam and other historical structures received another financing boost last week with a $500,000 commitment from the Vermont Community Foundation, a non-profit organization focused on improving and sustaining healthy communities in the state.

That commitment brought the total equity investment in the project to more than $2 million, according to Bill Colvin, of the Bennington County Regional Commission, who is the local contact person for the Bennington Redevelopment Group.

Equity investment commitments now being sought to complete the phase one financial package are expected to leverage nearly $23 million in grants, loans, preferred equity and tax credits, Colvin said. He said that range of backing reflects the wide support the project has received from both the public and private sectors in Vermont.

How much still needs to be raised?

"Depending upon final tax credit pricing, final New Market Tax Credit allocation, etc., the funding gap at this point is $500,000 to $1,000,000," Colvin said. "This will likely need to be raised in the form of leadership or preferred equity from the group or community members."

The BRG is a civic-oriented consortium formed around the belief that redevelopment of aging core downtown structures requires more resources than private developers would be likely to invest. BRG partners include The Bank of Bennington, Southwestern Vermont Health Care; Bennington College, Southern Vermont College, Dimitri Garder and Global Z International and several other entities and individuals.

But a groundbreaking for the project has been pushed back a couple of times since the first target date for phase one of October 2017. The group has cited the complex nature of the financing package, with grant, tax credit and other approvals required from various organization or agencies.

"Best guess at this point is sometime in November," Colvin said Friday in an email. "Will have a better idea in next couple of weeks."

He added that "construction work will commence immediately upon [the financial package] closing No construction within the [historic building] spaces or displacement of existing tenants will take place until the 90-day relocation notice has been issued and elapsed."

The project's first phase includes redevelopment of the Hotel Putnam, the adjacent former Courthouse or Pennysaver Press building and the Winslow building, as well as the cleanup and repurposing of a brownfields area on the four-acre project site. The acreage now contains six buildings bordering the central Four Corners intersection of Routes 7 and 9.

Bids currently are being sought for the demolition of the former H. Greenberg & Son hardware buildings, which is part of the environmental remediation work. The hardware and lumber business closed in 2014. Those buildings and the large former Greenberg & Son parking lot are to the rear, or west of the Putnam and Courthouse buildings.

According to a recent legal ad posting, Putnam Block project construction manager, Bread Loaf Corp., of Middlebury, is seeking bids for the demolition work by Sept. 21, with an expected start of the demolition of Oct. 1.

A significant piece of the phase one financing package fell into place in June, when Vermont Rural Ventures, which deploys New Market Tax Credits to projects in the region, increased the amount allocated to the Putnam project by $7.6 million — to what Colvin said was "a record amount of $15.6 million of allocation."

The complex package at that time included 17 funding sources that had been secured, leaving less than $2 million to be secured over the summer and fall, he said.

The BRG also is seeking investments of $25,000 or more for preferred project shares and offering approximately 3 percent annually and the return of the original investment amount when the project is refinanced at the end of the tax credit period — from seven to 10 years.

The proposed second phase of the Putnam Block project would include two new buildings housing medical services, offices and residential units; walkways, a pedestrian plaza and parking, and the remainder of the environmental mitigation work on the four-acre site.

The phase two parcels now include the former hardware store and lumber yard, a gas station-convenience store and a large parking lot — all located to the west of the former hotel and bordering on Washington Avenue to the west, Franklin Lane to the south, and Main Street (Route 9) to the north.