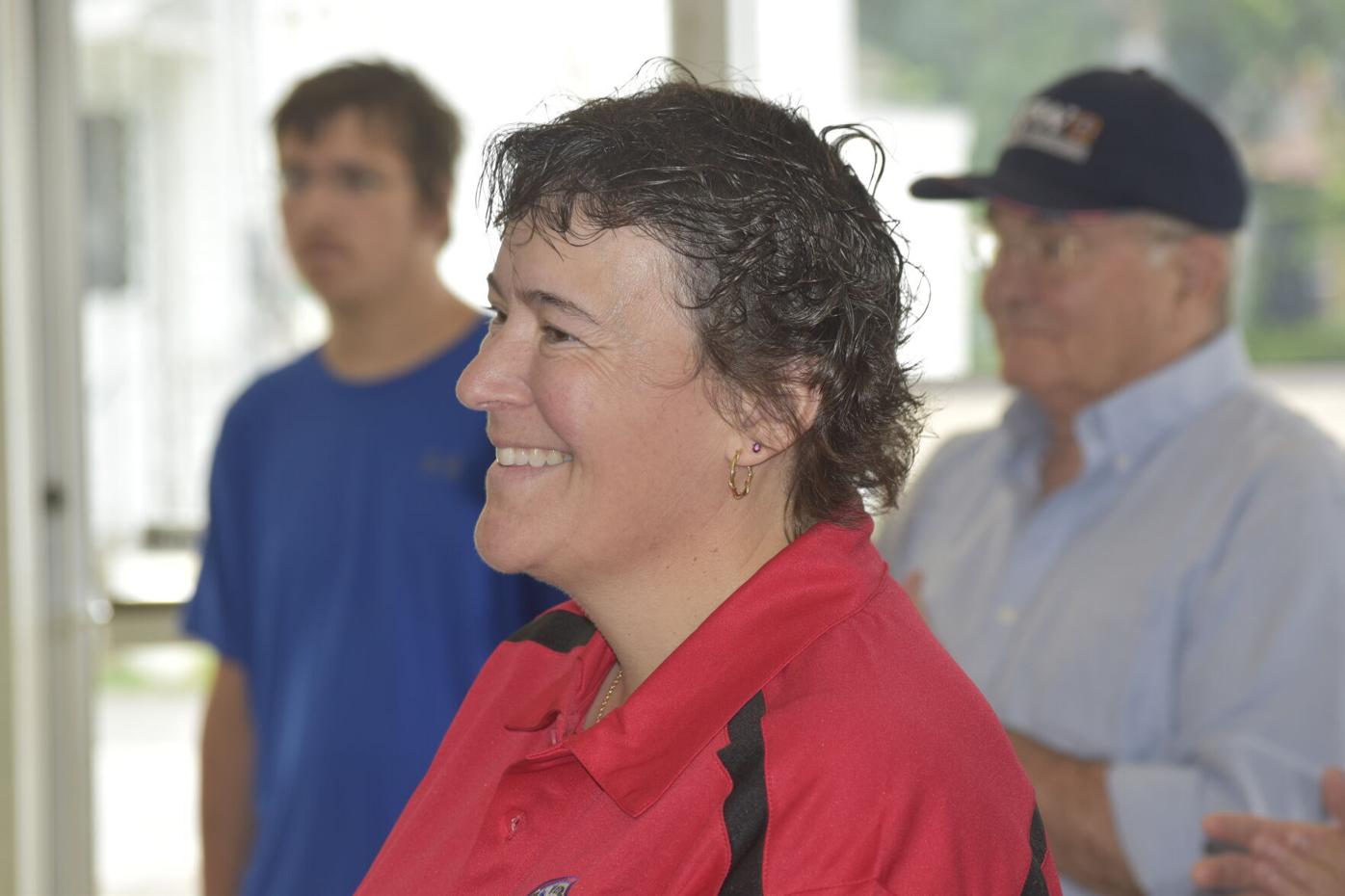 Michelle LeBlanc of Vermont Paws & Boots listens to speakers at the organization’s basket raffle on Friday. 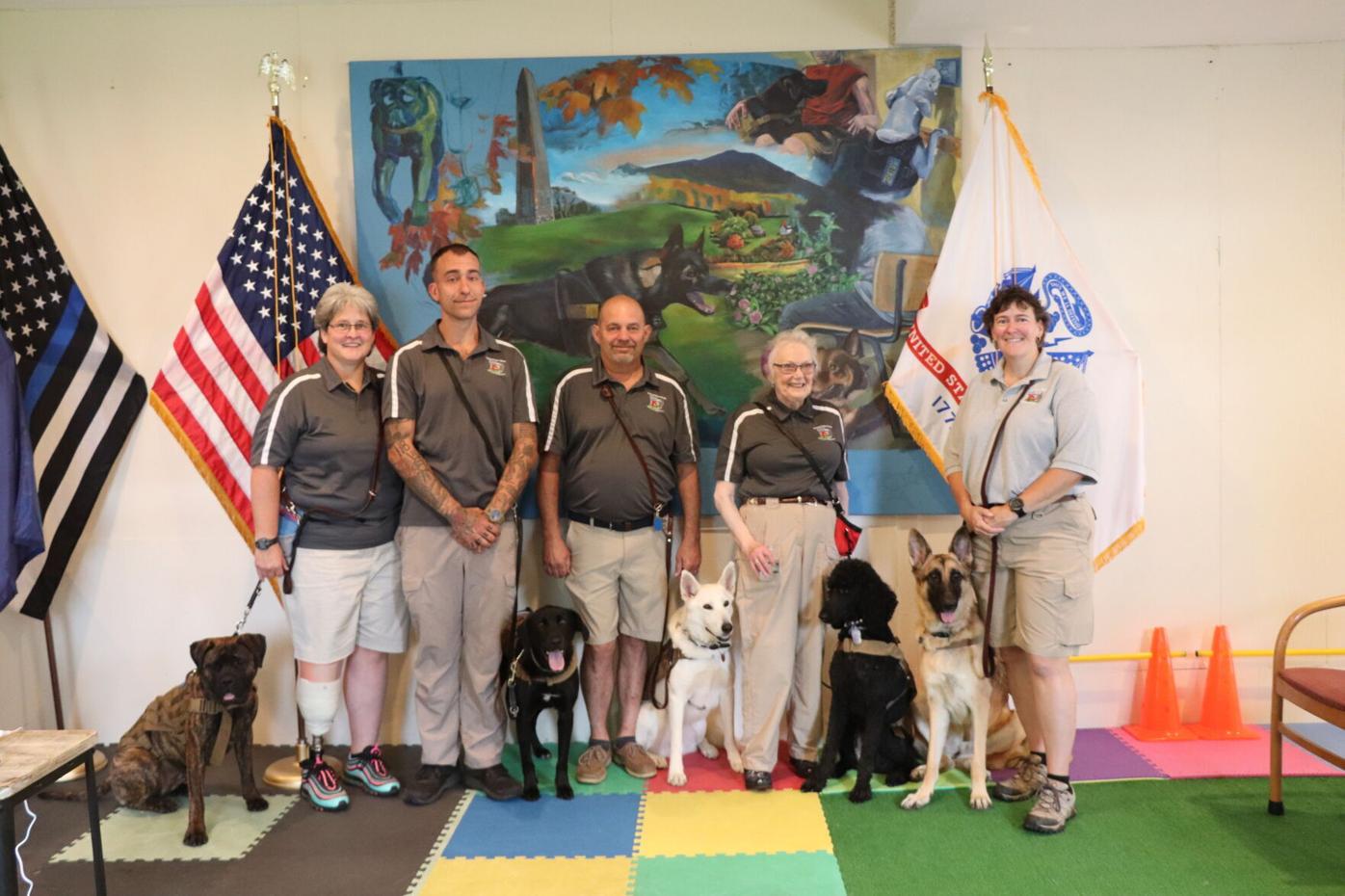 The sixth graduating class of Vermont Paws & Boots was honored on Thursday. Graduates, identified by the organization by first name only, are service dog Cricket and Trish; SD Bear and Robert; SD Gracie and Tim; SD Charlie and Nancy; and SD Mercie and director Michelle LeBlanc. 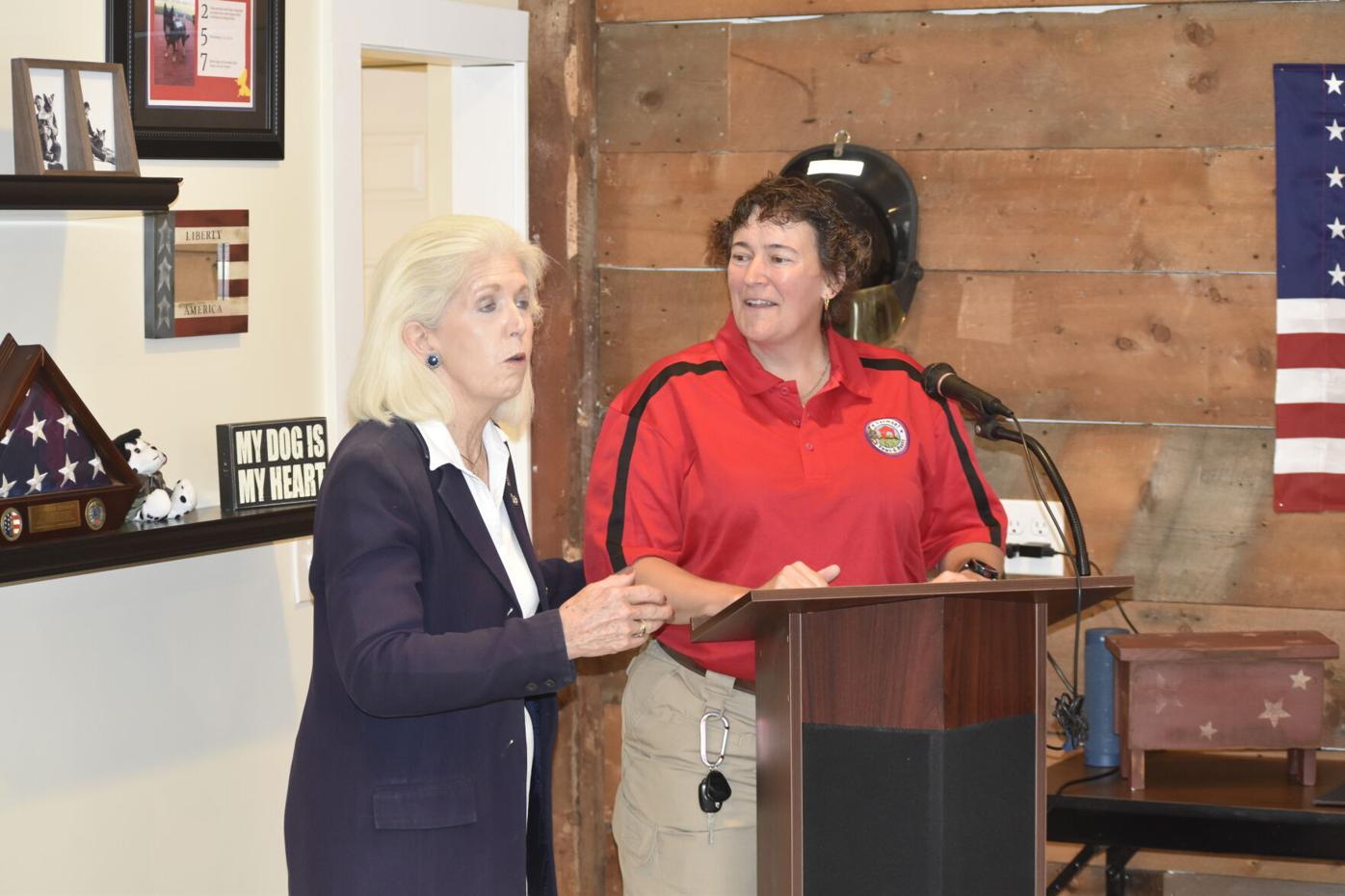 Michelle LeBlanc of Vermont Paws & Boots listens to speakers at the organization’s basket raffle on Friday.

The sixth graduating class of Vermont Paws & Boots was honored on Thursday. Graduates, identified by the organization by first name only, are service dog Cricket and Trish; SD Bear and Robert; SD Gracie and Tim; SD Charlie and Nancy; and SD Mercie and director Michelle LeBlanc.

BENNINGTON — For Michelle LeBlanc, the vests worn by the service animals she trains at Vermont Paws & Boots are a badge of courage for the humans whom they’ve befriended, as well as a sign that they’re working animals and not pets.

The organization kicked off a basket raffle fundraiser on Friday, and supporters stepped forward to testify to the work it has done for people who still bear the burdens of their service. Its sixth graduating class was recognized last Thursday — two women, two men, and four dogs.

On Friday, as the basket raffle began, one of those local veterans was LeBlanc’s former Little League coach, John Miner. LeBlanc, who had her set on baseball rather than softball as a kid, played second base for Miner’s team.

“What she’s doing now takes so much of her time, and she’s willing to give that time,” Miner said. “On behalf of all of us Vietnam vets, I really want to say thank you.”

“This is such a wonderful addition to the community and what can be offered to veterans and first responders,” added Art Groux, director of the Bennington Rescue Squad.

Groux said he had the chance to see therapy dogs being used in person when, in a past role, he spent days on the scene of the Sandy Hook Elementary School shooting in Newtown, Conn. “I saw how beneficial this is to the first responder, “ he said. “To have this program here in town is great.”

For veterans and first responders with PTSD — people who were alpha personalities in their chosen profession, but have self-isolated for years as they live with the cost of their service — a restaurant visit or a trip to the grocery store can be a significant hurdle. Coming to terms with the perception of a service dog as a sign of weakness is a challenge LeBlanc helps her clients overcome.

“I have to teach them that don’t be ashamed that you now need a service dog,” LeBlanc said. “One of the catch phrases I have … is ‘We can’t unsee the things that we’ve seen.’ And these people that maybe stare at you, or pick on you and say, oh you’re weak because you got a service dog or you can’t handle this — you know, they probably were not out in the military, they probably were not a first responder for 20-something years.”

“Don’t use this as something that’s bad, use it as a badge of courage,” LeBlanc said. “You were able to do and see things that most people cannot do. And because of that you just need a little extra security and a little extra confidence in your dog.”

The program pairs dogs — mostly rescue dogs, but sometimes a client’s own four-legged friend — with veterans or first responders. The training takes about a year, as LeBlanc is steadfast that her clients and their dogs have the skills, counseling and support system they need to make it all work.

“It’s a tough program and I want it to be tough. These dogs are saving people’s lives and that is not an easy task,” LeBlanc said.

“When you build that bond from the start, you’re building the confidence in the trust in each other from the start. And that’s what is so key to the success of this program,” she said. “They start trusting each other so when they say if it’s a PTSD dog or traumatic brain injury, or military sexual trauma and they start to trust each other.”

“Bank robbers, they’re stressing, they’re sweating, the dogs are actually smelling all the millions of follicles that are falling off their body,” LeBlanc explained. “Service dogs are the same exact way, they’re smelling our chemical body changes that occur when you’re calm versus when you’re ready to have an anxiety or panic attack … And when you start to have that bond and they trust you, they realize that something is wrong.”

The dogs are trained to react to that fight-or-flight response by grounding the person — which can be as subtle as leaning against them, or putting their paws on a person’s lap or chest.

Just as important, LeBlanc said, is that a person learns to read the dog’s cues — its ears, eyes, tail and jowls — and understand what the dog is telling them about their own response.

“When [the dog starts] pushing up against them they’ve gotta start reading the dog .. the dog is telling me “I’m getting jacked up, I’ve gotta take a step back.”

LeBlanc also thanked Morrissey for her advocacy in helping to keep Vermont Paws & Boots’ doors open as an essential service to the veterans it serves, despite the COVID-19 pandemic.

“That happened because Mary was able to go to the Statehouse, talk to Dr. [Mark] Levine and say ‘we need this open,’” LeBlanc said. “We never shut our doors.”