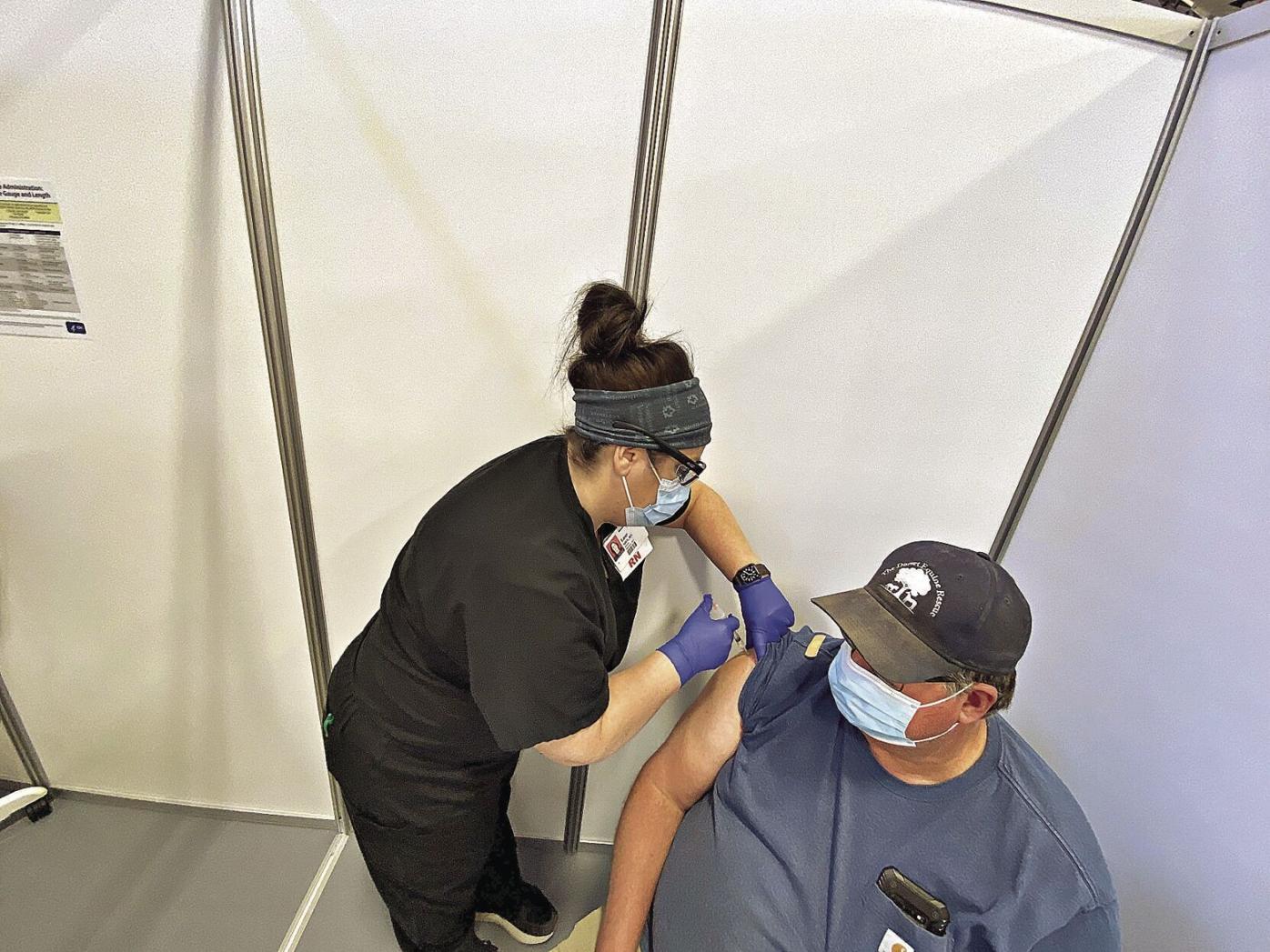 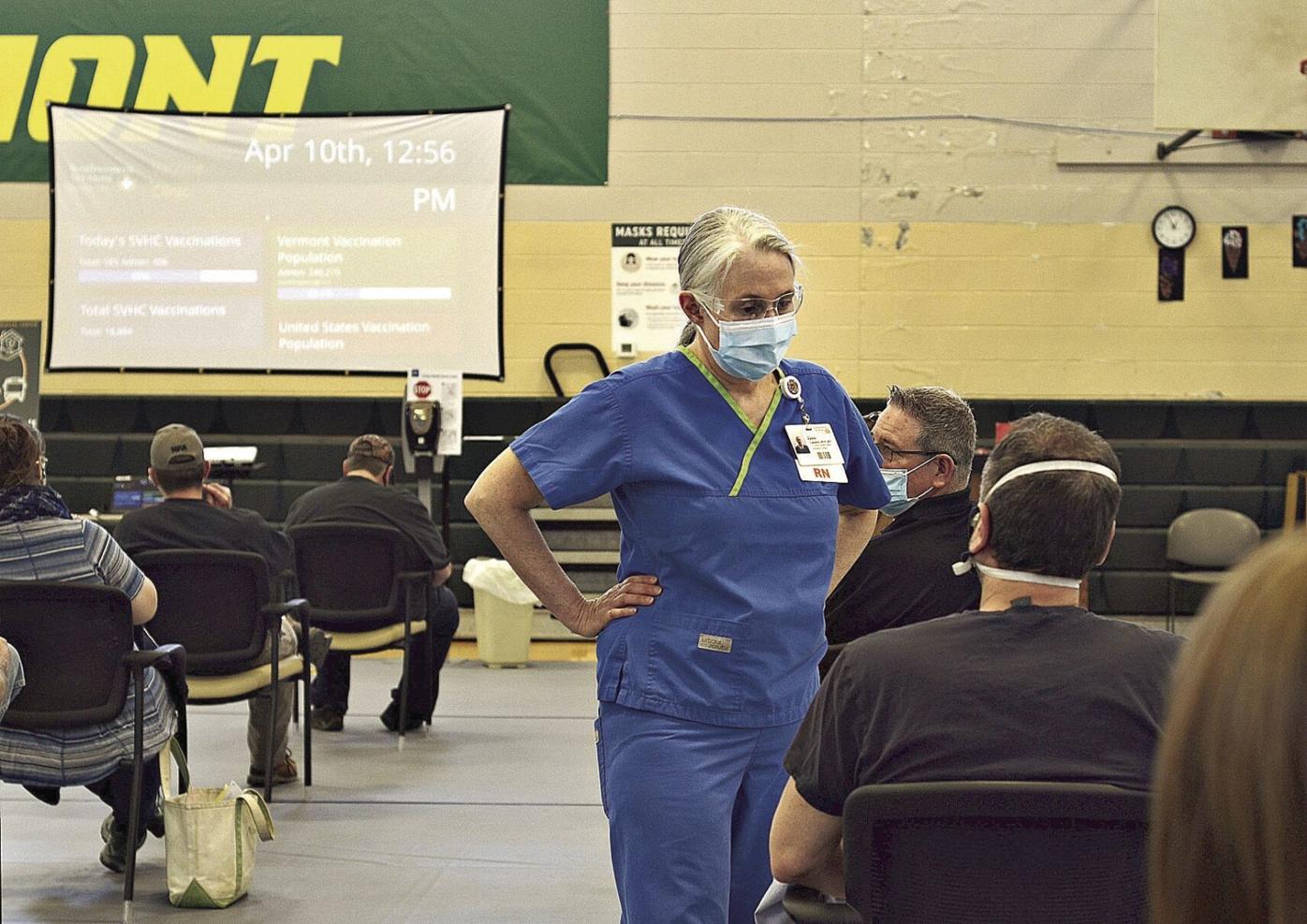 Janis Yannotti, BSN, RN and logistics coordinator for the clinic, talks with a patient who is waiting the 15-minute waiting period after receiving the vaccination at the vaccine distribution site in Bennington on Saturday. 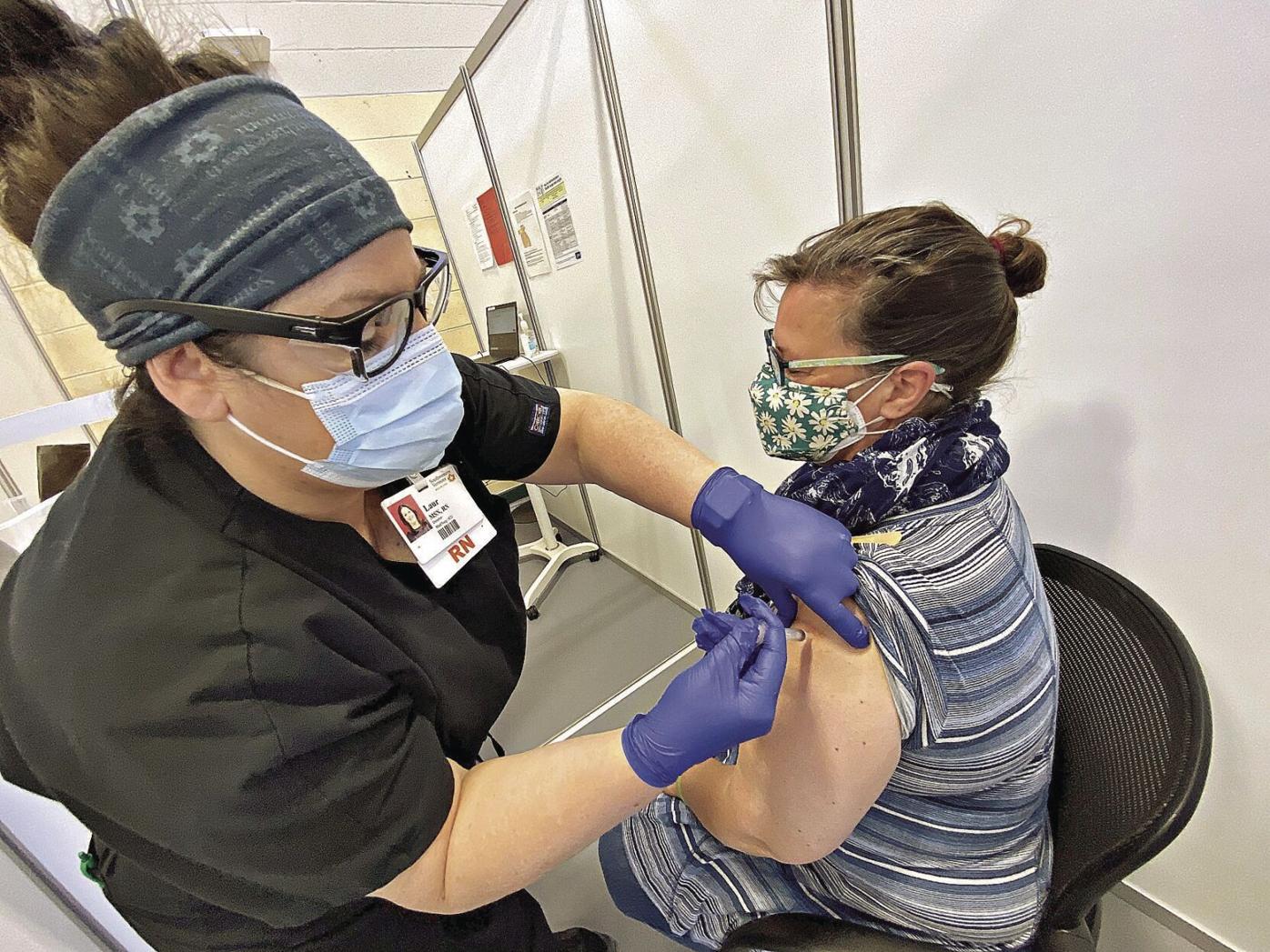 Janis Yannotti, BSN, RN and logistics coordinator for the clinic, talks with a patient who is waiting the 15-minute waiting period after receiving the vaccination at the vaccine distribution site in Bennington on Saturday.

On Saturday, 583 people received a Johnson and Johnson vaccine inside the former Southern Vermont College gymnasium. That brings the total number of vaccines administered by Southwestern Vermont Medical Center since the clinic began in mid-January to more than 19,000.

For some receiving the shot, it’s the first time they’ve felt hopeful in the past 13 months.

Carlton Munsill of Searsburg was brought to tears as he reflected on the impact the coronavirus has had on his life.

“A couple of my co-workers died,” Munsill said.

Cones separated a waiting area from those in the 15 minute “cool-down” area, ensuring that there were no allergic reactions to the vaccine. As patients waited, a projector with live stats regarding the vaccination rate throughout Vermont — as well as throughout the country — could be seen from their chairs.

Munsill, looking at the projector, feels a sense of hope that he hadn’t felt in a long time.

“Forty-eight percent of Vermont’s already vaccinated,” he said. And then, within a few seconds that number changed. “Forty-eight point one percent,” Munsill read.

Kristy Pratt works at Mount Anthony Union Middle School. She had her doubts initially about receiving the vaccine.

“It wasn’t something I really wanted to do at first, I was kind of scared,” Pratt said.

Pratt said seeing how many other people were receiving the vaccine helped her move past those fears.

“I figured if everybody else could do it, it’s no different than me doing it,” she said.

Pratt said the shot itself wasn’t as bad as she anticipated.

“I feel great actually. It wasn’t as bad as I thought it was going to be, the tetanus shot hurts worse than this does,” Pratt chuckled.

Being around children without being vaccinated is a common concern for school employees. Pratt is glad she doesn’t have to worry about that anymore.

“It feels nice, I feel more safe. Especially being around children,” Pratt said.

School employees became eligible for the vaccine in Vermont on March 8.

“We're here to create a fantastic experience, an efficient flow, and a safe environment, and that's what it's all about.”

Tiffany Tobin is the operations manager of the clinic. Tobin has overseen the process with care.

“We’re here to create a fantastic experience, an efficient flow, and a safe environment, and that’s what it’s all about,” Tobin said.

Patients are met with help every step of the way. A security guard greets you prior to your entrance, SVMC staff is there to guide and help with any questions.

Tobin said if a patient were to have an allergic reaction to the vaccine, there are private rooms with nurses to care for the patient.

Chip Straub of Dorset was among those that received the vaccine on Saturday. Straub said once he is fully vaccinated, he has plans to visit with family.

“I’m going to be seeing my parents, which I didn’t get to see last year very much,” Straub said.

Vermonters 30 years and older are eligible to sign up for their vaccine starting April 12, with the 16+ age group eligible beginning April 19. Out of state students attending a Vermont college or university are eligible as of April 30.

The clinic at SVC administers all three approved vaccines: Johnson and Johnson, Moderna and Pfizer.