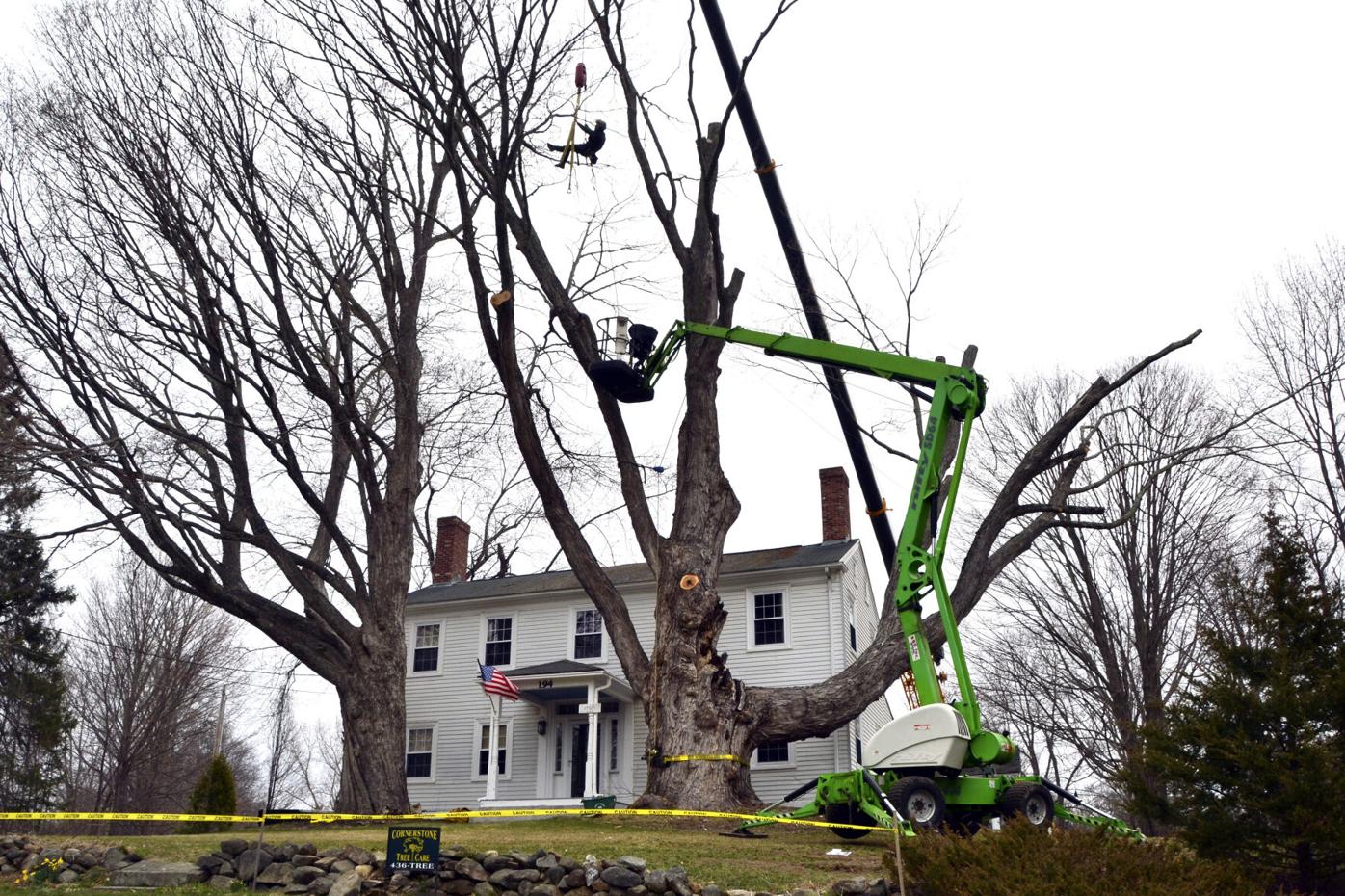 Micum Davis is suspended in the air while working to cut down a sugar maple tree, in Kensington, N.H., Monday, April 5, 2021. The 100-foot-tall tree, believed planted in the late 1700s, was cut down for safety reasons. (AP Photo/Michael Casey) 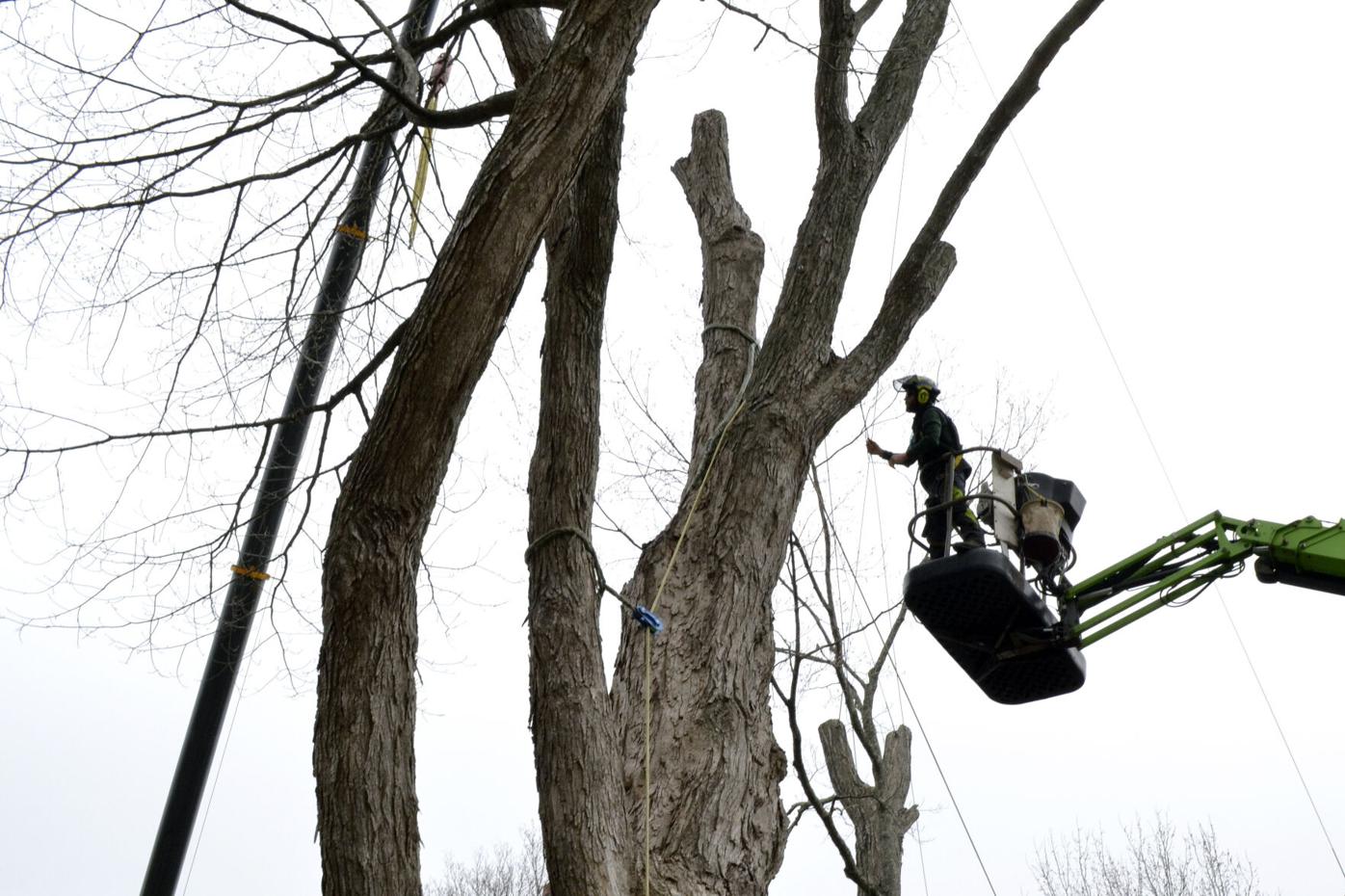 Micum Davis stands on a boom lift while working to cut down a sugar maple tree, in Kensington, N.H., Monday, April 5, 2021. The 100-foot-tall tree, believed planted in the late 1700s, was cut down for safety reasons. (AP Photo/Michael Casey)

Micum Davis is suspended in the air while working to cut down a sugar maple tree, in Kensington, N.H., Monday, April 5, 2021. The 100-foot-tall tree, believed planted in the late 1700s, was cut down for safety reasons. (AP Photo/Michael Casey)

Micum Davis stands on a boom lift while working to cut down a sugar maple tree, in Kensington, N.H., Monday, April 5, 2021. The 100-foot-tall tree, believed planted in the late 1700s, was cut down for safety reasons. (AP Photo/Michael Casey)

KENSINGTON, N.H. — A sugar maple tree that has watched over a New Hampshire home for more than 200 years and was one of the largest of its kind in the United States is coming down because of safety concerns.

As a small crowd looked on Monday, arborist Micum Davis started trimming the crown of the tree in Kensington with the goal of taking it apart by the end of the day. Given the tree has a crown stretching 100 feet across, a diameter of more than 7 feet and stands 100 feet tall, the job required a crane to haul away branches as Davis cut them off with a chainsaw. A wood chipper howled in the background.

The tree has won plenty of accolades over the years. It has been recognized by the New Hampshire Big Tree Program and appears in the National Register of Champion Trees. It is considered the second largest sugar maple after one in Virginia, according to Rose Tileston, the manager of American Forests’ National Champion Trees program.

Janet Buxton, whose family has owned property where the tree stands since 1954, proudly showed off a certificate she received touting its size.

“It’s been the guardian of us. I don’t know what to say. We grew up with it. It’s been special to the whole family,” Buxton said, sitting at her kitchen table. “We’re all sad to see it go but we have thoroughly enjoyed it for the 67 years we have been here.”

Davis estimated the tree was at least 240 years old and is one of two on the property planted at the same time. They are known as wedding trees because they were planted on each side of the home’s doorway, a sign that it might have been a gift to newlyweds. The other maple remains.

The maple being cut down has as survived plenty of storms over the years and provided a place for birds including a whip-poor-will whose calls could be heard many nights and a recent owl family that made a home in the trunk. Squirrels, Buxton said, used the tree to get into the family’s attic.

But a bout of recent storms with strong winds proved too much. Cracks formed in the trunk and it became clear that the tree had become a safety hazard, with the potential for branches to fall onto the house. There was also widespread rot in the tree and Buxton began to hear the tree creaking.

“She’s just at the end of her life,” Buxton said. “She is finally being euthanized. It’s unsafe and it’s not fair to her to let her stand out there and not be as beautiful as she always has been.”

The tree has long been the talk of those who track the largest in the state. Among them is Kevin Martin, who has in the past run the state’s Big Tree Program and now oversees the county program that is home to the maple. The state program now includes over 1,000 county, state and national champions. Proud owners are constantly calling Martin and his colleagues to come out and check out their tree.

Martin had the chance to size-up the maple a few years back and admits it “was impressive.”

“It’s disappointing especially when it’s national champion, but we do lose them fairly frequently if they are too close to a home,” Martin said. “Even in the woods, they are dying and blowing over. We have been losing quite a few lately.”

He hypothesized that perhaps a lot of the were grown around the same time and are now, accordingly, dying off. Another big sugar maple dating back to the Revolutionary War was cut down in Dummerston Center, Vermont in 2019 (“Once a champion, now just a memory: Dummerston maple tree cut down,” Reformer, Feb. 14, 2019).

Once a champion, now just a memory

DUMMERSTON CENTER — The ancient sugar maple had graced the lawn in front of the equally old home on the East-West Road in Dummerston Center since shortly after the Revolutionary War. Once the …

As branches were hauled off and the sounds of a chainsaw filled the air, onlookers were transfixed. Among them was a mother with her two boys and a couple from Manchester who had read about the tree and wanted to see what all the hype was about.

“I said, a 250-year-old tree is coming down, let’s go take a look at it,” Diane Pease said. “It’s amazing to watch, the skill it takes this guy to do that. I’m waiting for that big limb to come down.”

Russ Pease said he was just thinking of the tree being planted as a sapling all those years ago.

“We are assuming when the house was built in 1780 that these were just baby trees,” he said. “To watch it grow for this many years, it’s amazing that it’s still alive. It’s too bad we have to take trees like this down but it gets to the point of a safety issue.”