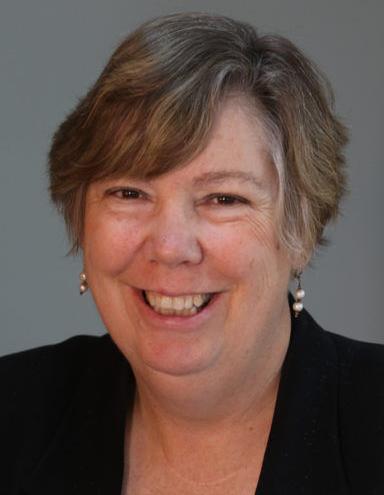 Judith Enck, the founder of Beyond Plastics, which is based at Bennington College. The group released a report Thursday that found the plastics industry is gaining on the coal industry as a producer of greenhouse gases. 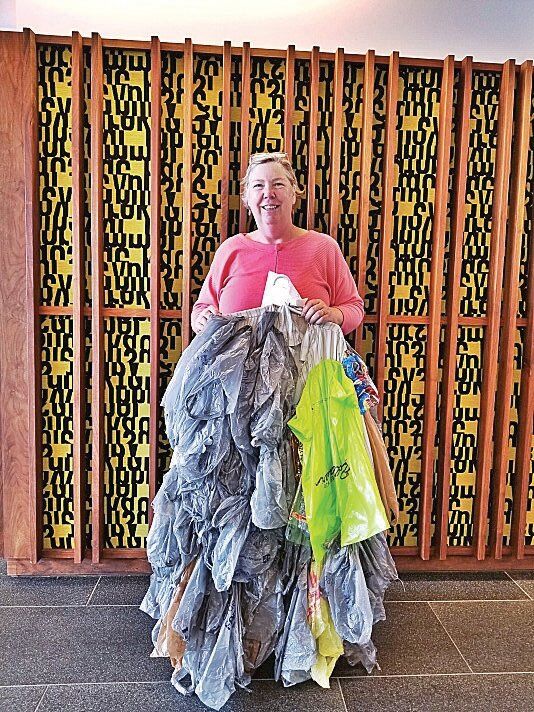 Judith Enck holds the "Bag Monster," which is made from many single-use plastic bags that were collected by her students for a project at Bennington College. 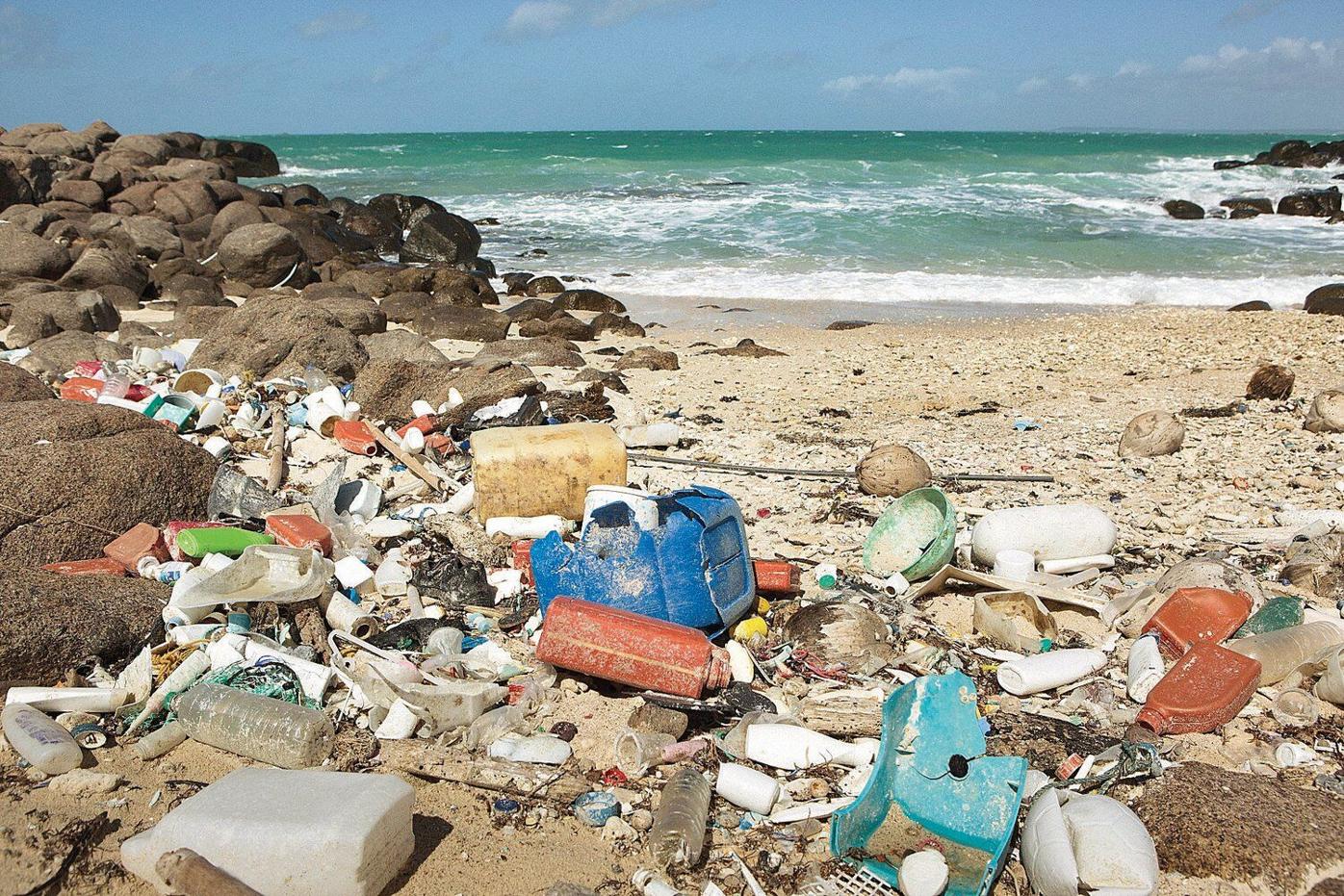 An assortment of debris, largely plastic and believed to be largely from Indonesia, that washed up on the shores of Bremmer Island, off the coast of northern Australia, in 2018.

Judith Enck, the founder of Beyond Plastics, which is based at Bennington College. The group released a report Thursday that found the plastics industry is gaining on the coal industry as a producer of greenhouse gases.

Judith Enck holds the "Bag Monster," which is made from many single-use plastic bags that were collected by her students for a project at Bennington College.

An assortment of debris, largely plastic and believed to be largely from Indonesia, that washed up on the shores of Bremmer Island, off the coast of northern Australia, in 2018.

BENNINGTON — Plastics are on track to contribute more climate change emissions than coal plants by 2030, a new report from a nationwide initiative at Bennington College concludes.

As fossil fuel companies seek to recoup falling profits, the report released Thursday by Beyond Plastics found that the firms are increasing plastics production and canceling out greenhouse gas reductions gained from the recent closures of 65 percent of the country’s coal-fired power plants.

“The New Coal: Plastics and Climate Change” by Beyond Plastics analyzes never-before-compiled data of 10 stages of plastics production, usage and disposal, according to a statement issued Thursday, and finds that “the U.S. plastics industry is releasing at least 232 million tons of greenhouse gases each year, the equivalent of 116 average-sized coal-fired power plants.”

And that number is growing quickly, the report states.

In 2020, the plastics industry’s reported emissions increased by 10 million tons of greenhouse gas over 2019. Construction is currently underway on another 12 plastics facilities, and 15 more are planned. According to the report, altogether these expansions may emit more than 40 million more tons of greenhouse gases annually by 2025.

“The fossil fuel industry is losing money from its traditional markets of power generation and transportation,” said Judith Enck, former EPA Regional Administrator and president of Beyond Plastics.

“They are building new plastics facilities at a staggering clip so they can dump their petrochemicals into plastics,” Enck stated. “This petrochemical buildout is canceling out other global efforts to slow climate change.”

According to the report, the U.S. plastics industry released 114 million tons of greenhouse gases nationwide in 2020. Ninety percent of its reported climate change pollution occurs in just 18 communities, where residents earn 28 percent less than the average U.S. household and are 67 percent more likely to be people of color.

In addition to greenhouse gases, these facilities also emit massive amounts of particulates and other toxic chemicals into the air, threatening residents’ health, the report found.

What the industry reports is less than half of what it actually releases, according to the analysis by Material Research, which jointly released the statement and participated in a virtual media conference Thursday.

The Maine firm examined data from federal agencies, including the U.S. Environmental Protection Agency, Department of Commerce, and Department of Energy, and found a severe undercounting of plastics’ climate impacts.

It is important to note that the report’s estimates are conservative, researchers said.

“This report represents the floor, not the ceiling, of the U.S. plastics industry’s climate impact,” stated Jim Vallette, president of Material Research and the report’s author. “Federal agencies do not yet count many releases because current regulations do not require the industry to report them. For example, no agency tracks how much greenhouse gas is released when plastic trash is burned in cement kilns, nor when methane leaks from a gas processing plant, nor when fracked gas is exported from Texas to make single-use plastics in India.”

As Congress finalizes federal spending bills and the United Nations prepares to meet for COP26 in Glasgow, Scotland, next month, “their failure to acknowledge and act to reduce plastics’ contribution to climate change threatens to undermine global climate change mitigation efforts,” according to the statement.

“The scale of the plastics industry’s greenhouse gas emissions is staggering, but it’s equally concerning that few people in government or in the business community are even talking about it. That must change quickly if we hope to remain within the 1.5 degree C global temperature increase scientists have pinpointed as critical to avoiding the most devastating impacts of climate change,” Enck said.

In addition to the full report, the details of this research are available at BeyondPlastics.org, including analysis of the plastics industry that has never been made available to the public.

1. Hydrofracking of plastics feedstock releases methane, a powerful climate change pollutant. By 2025, methane releases could reach 45 million tons each year, which is more GHG than was released by 22 average coal-fired power plants in 2020.

3. Ethane Gas Cracker Facilities release at least 70 million tons of GHG each year. These 35 cracker facilities release as much GHG as 35 coal-fired power plants. Two new cracker projects are nearing completion in Corpus Christi, Texas, and Beaver County, Pa. Three others are planned in Ohio, Louisiana, and Texas. New and expanded capacity at more than a dozen existing plants could add an additional 40 million tons of GHG per year — equivalent to 20 coal-fired power plants.

6. Exports and imports of plastics feedstocks and resins and products emit at least 51 million tons of GHG each year — equivalent to more than 25 coal-fired power plants. More than 41 percent of plastic resins made in North America are exported, and countries including India and China are building new crackers to make plastics from feedstocks extracted in the U.S.

8. “Chemical Recycling,” a term used by the plastics industry to describe the processing of plastic waste into fuel, has barely begun, but by 2025, new capacity may cause the release of 18 million tons of GHG each year — equivalent to nine coal-fired power plants.

10. Plastics in the water degrade into GHGs. These releases are not yet fully understood nor are they tracked.