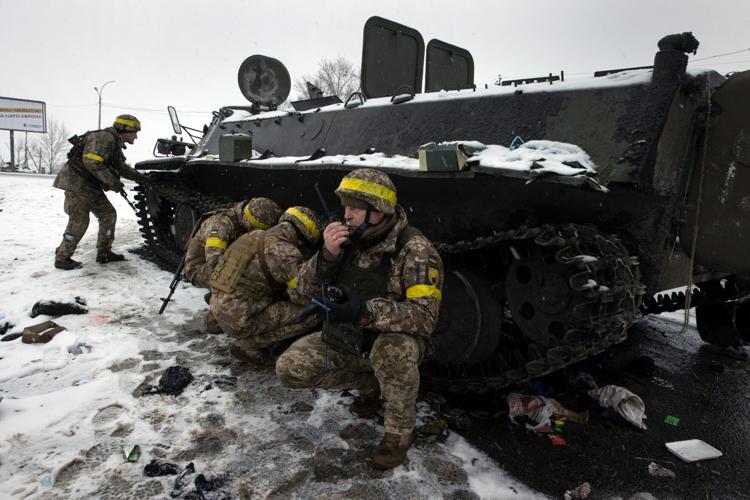 Ukrainian soldiers in Kharkiv, Ukraine, on Friday. Many in Taiwan see parallels with Ukraine. 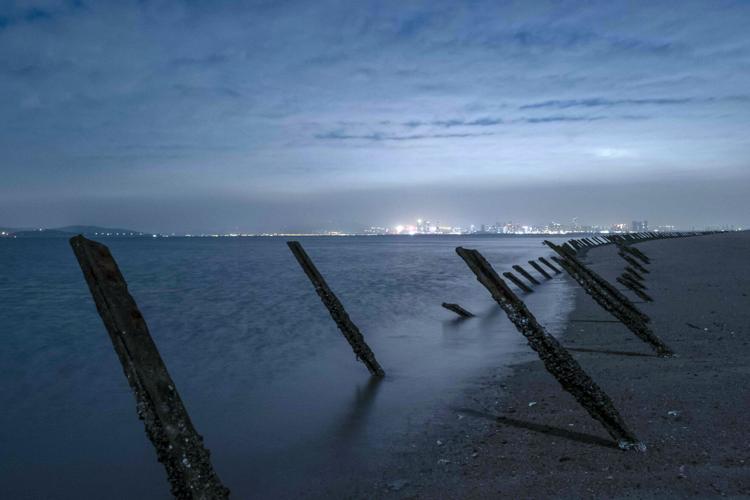 Anti-tank fortifications from previous conflicts line the shore of a beach in Kinmen — an outlying island controlled by Taiwan — with a view of China in the distance. Many in Taiwan see parallels with Ukraine. 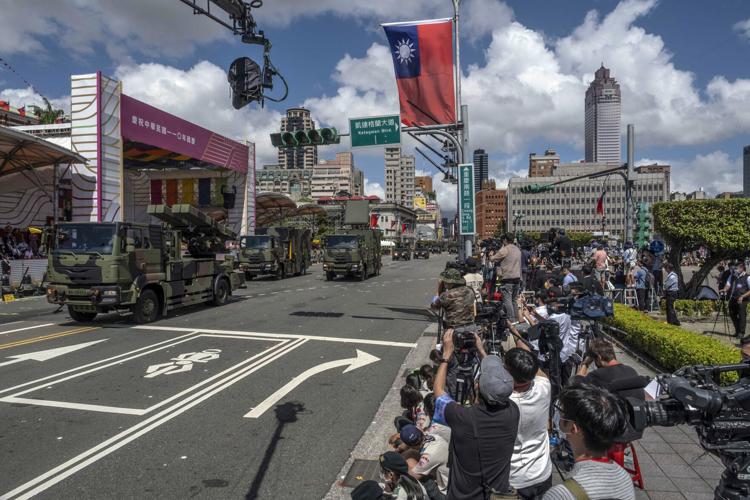 A military parade in Taipei for Taiwan's national day celebration on Oct. 10.

Ukrainian soldiers in Kharkiv, Ukraine, on Friday. Many in Taiwan see parallels with Ukraine.

Anti-tank fortifications from previous conflicts line the shore of a beach in Kinmen — an outlying island controlled by Taiwan — with a view of China in the distance. Many in Taiwan see parallels with Ukraine.

A military parade in Taipei for Taiwan's national day celebration on Oct. 10.

TAIPEI, Taiwan — Since Russia invaded Ukraine, Justin Huang, 23, a recent university graduate in Taiwan, has been gripped by news of the crisis, just like many other people around the world. He has pored over reports about Ukrainians signing up for the military and scrutinized video footage of Russian missiles hitting residential buildings. He has been deeply disturbed by Russia’s brazen disregard for global norms.

But for Huang and many Taiwanese, Russia’s assault is hitting especially close to home.

The self-governed island democracy has long faced the threat of being absorbed by the Chinese Communist Party in Beijing, which has vowed to do so by force if it deems necessary. As Taiwanese watch Russian troops pour into Ukraine, their unease about their island’s own future is growing. The courage of Ukrainians, as well as the harsh reality of that country’s lonely battle, has driven a greater sense of urgency among many Taiwanese to step up the island’s defenses.

“Reading the news has been a bit traumatic emotionally,” Huang said. Moved by a sense of solidarity with Ukraine, he and around 200 other people protested Saturday outside Russia’s de facto embassy in Taipei. He said he feared that the invasion of Ukraine could be the “tipping point” in the world order, ushering in a new era in which autocrats could act with impunity.

“I can see how, after the crisis in Ukraine, it’s possible that China could find some reason to invade Taiwan in the near future,” he said.

Taiwan’s parallels with Ukraine are evident to many on this island of 23 million people. Taiwan, like Ukraine, has long lived in the shadow of a large and overbearing neighbor. Both China’s leader, Xi Jinping, and President Vladimir Putin of Russia have appealed to nationalistic historical narratives to try to justify their present-day territorial claims. And Xi has in recent years intensified his warnings to Taiwan not to seek formal independence from China, similar to the ways in which Putin had threatened to punish Ukraine if it sought to strengthen security ties with the West, for instance by joining NATO.

In Taiwan, the invasion has rekindled debates about the probability of a Chinese invasion, the level of Taiwan’s military preparedness and whether the United States is committed to defending the island. Taiwan is more vulnerable than Ukraine, to some extent, because it is not recognized by most countries as a sovereign nation.

For days, the slogan “Today, Ukraine, tomorrow, Taiwan!” has ricocheted online. On Taiwan’s news programs and talk shows, some pundits have said that Beijing could take advantage of a distracted West to step up its pressure on Taiwan. Others have expressed concerns that a weak Western response to Russia’s invasion could embolden the Chinese leadership. Still others have said such talk has only created unnecessary anxiety.

Regardless of the possible outcomes, many Taiwanese see a need for greater self-reliance.

Dr. Charlie Ma, 59, a physician in Taipei, said the West’s refusal to send troops to help Ukraine fight Russia made him think Taiwan could not count on other countries coming to its defense. If China invaded Taiwan, Ma said, he would volunteer as a combat medic.

“This is Ukraine’s lesson for us: Don’t rely on others,” he said.

While Beijing now regularly sends warplanes toward Taiwan, there is no sign that an attack on the island is imminent. Ma said his biggest concern was that an accident, like a collision of military planes, could inadvertently start a war.

For Tsai, drawing comparisons with Ukraine helps bring world attention to Taiwanese concerns about Beijing’s aggression, but leaning too heavily on that narrative risks stirring panic at home.

Tsai has said that Taiwan empathizes with Ukraine and pointed to that country’s continuing resistance as evidence of strength in unity.

“We all see the people of Ukraine come together to fight against the invasion by a powerful country,” Tsai said on Monday. She was speaking at a ceremony commemorating one of the most painful chapters of Taiwan’s modern history: a popular uprising in 1947 in Taiwan that was crushed by Nationalist soldiers, who killed tens of thousands of people.

But she and other voices in Taiwan have also taken pains to emphasize that the situations are significantly different.

Unlike Ukraine, which has a land border with Russia, Taiwan is separated from mainland China by a wide body of water, making an invasion more difficult. The world, including China, also has much to benefit from a stable Taiwan, which is a key node in the global economy.

In the face of growing belligerence from Beijing, Tsai’s government has highlighted the United States’ efforts to bolster its presence in Asia and its unofficial ties with Taiwan. On Monday, the Biden administration sought to demonstrate support for Taiwan in the wake of Russia’s invasion of Ukraine by sending a delegation of former senior defense and security officials to the island.

Still, many in Taiwan are aware that even as the United States provides political and military support, it has long avoided explicitly committing to defend Taiwan in the event of an attack by China. Some people have pointed to the reports of Ukrainian civilians standing in line for Kalashnikovs and volunteering to donate blood, urging Taiwan to invest in its nascent civil defense.

In recent years, grassroots programs have sprung up to teach citizens first aid skills and situational awareness, like how to locate the closest bomb shelter. Last week, one of those programs, Kuma Academy, posted on its Facebook account a flyer for a two-day camp that was billed as an opportunity to build knowledge of modern warfare concepts and learn essential self-defense strategies.

“Of course, the situation in Ukraine cannot be directly compared to that of Taiwan,” the camp’s organizers wrote in the accompanying post. “But the situation of the Taiwan Strait is such that we cannot let our guard down, and we must use this time of peace to prepare for the worst.”

Other citizens of Taiwan have drawn a far different message from Russia’s invasion, seeing it as horrific evidence that a powerful country’s limits should not be tested. They say that rather than lean on the United States, Tsai’s government should work to improve relations with Beijing to avoid a war.

For Tu Dong-siang, 58, a retiree, the war in Ukraine reminded her of growing up in Matsu, part of a chain of Taiwan-controlled islands near China’s coast that was frequently shelled by mainland troops until the 1970s. Tu recalled the terror she often felt as a young girl, running with her family for cover in their local bomb shelter, sometimes while still carrying her dinner bowl.

“We know how horrific war can be,” said Tu, who now lives in New Taipei City. “That’s why I think for Ukraine, and for Taiwan, being able to live is the most important.”

And even as ties between Taiwan and China have deteriorated in recent years, some pockets of the island still retain strong familial ties with the mainland, which make the notion of going to war unfathomable.

Tu’s son, Rick Hsieh, 26, said that while he had just completed the military service required of all Taiwanese men, he had no desire to fight China. Hsieh said that unlike many of his peers, he felt an affinity with the mainland, where he still had relatives. He was even open to the idea of unification.

“Of course, I know there might be limits to freedom of speech, but overall I don’t think being absorbed by China would be that bad,” said Hsieh, a poet who works at a cafe in New Taipei City.

For many others in Taiwan, though, the war in Ukraine has only reinforced their embrace of the island’s democratic values.

At Saturday’s anti-war rally in Taipei, demonstrators hoisted signs with slogans such as “Ukraine is not alone” and “Taiwan stands with Ukraine!” Hours later, buildings around Taiwan, including the iconic Taipei 101 skyscraper not far from the protest, were lit with the blue and yellow of the Ukrainian flag in a show of solidarity.

“In the end, Taiwan’s situation is not that different from Ukraine’s,” said Lillian Lin, 50, a stay-at-home mother, who attended the rally with her husband and 9-year-old daughter.

“To be honest, a dictator is a dictator, and the decisions they make are basically the same.”