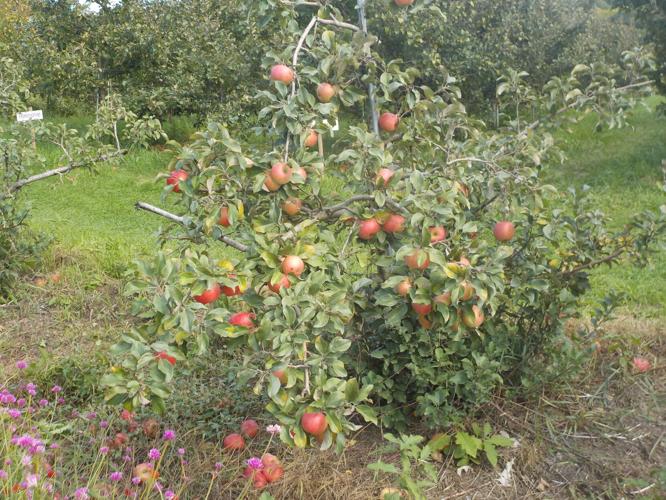 Commercial orchardists are using dwarf cultivars like this, but they need to staked. 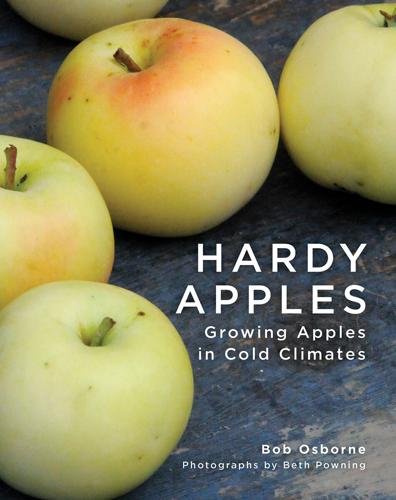 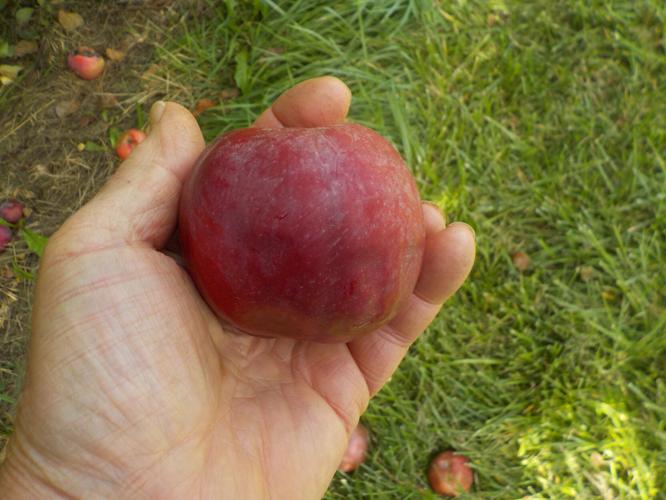 McIntosh apples are parents to many disease resistant cultivars, but are not resistant to common dieases.

Commercial orchardists are using dwarf cultivars like this, but they need to staked.

McIntosh apples are parents to many disease resistant cultivars, but are not resistant to common dieases.

I love the saying that something is “As American as apple pie.” I love apple pie and would have some for breakfast every day if I could. But oddly enough, apples are not native to the United States. They came from Kazakhstan, in central Asia east of the Caspian Sea. According to a Google search, The capital of Kazakhstan, Alma Ata, means “full of apples” and by 1500 BC apple seeds had been carried throughout Europe – and eventually here. Apple breeders have been selecting and propagating apples ever since.

I recently received a review copy of a great book about apples, “Hardy Apples: Growing Apples in Cold Climates:” by Bob Osborne with lots of fabulous photos by Beth Powning and published by Firefly Books (hardback, $35.00). It covers not only how to grow apples, but also has 140 pages of photos and descriptions of the best apples we can grow.

I spoke to Bob Osborne by phone at his home in New Brunswick, Canada. Bob has been planting apple trees in his orchard for over 40 years, mainly for scions (shoots) used for grafting by other orchardists. That required him to grow many, many different cultivars (varieties) of apples.

Bob is an organic grower, and has paid attention to his soil as the key to healthy growth. In his book he does a fine explanation of the soils that best support healthy apple trees. He recommends doing a soil test before planting apples.

A soil pH lower than 6.3, he notes, will not allow a tree to access the nutrients necessary for optimal growth and fruit quality. Calcium, magnesium and phosphorus can be bound up and unavailable even if present in the soil. He writes that in areas with naturally acidic soils, it is good to add lime every six years to keep the soil pH in the correct range.

Chemical fertilizer, he writes, provides nitrogen that when dissolved in water is highly acidic and can destroy much of the soil life that provides nitrogen naturally. Instead he recommends adding compost, blood meal, feather meal, fish meal or bone meal. He explains that you should not use fresh manures even though they are good sources of nitrogen. They can carry disease-carrying bacteria that can sicken you if you pick up dropped apples.

Potassium is important for good quality fruit. Low potassium “may result in small fruit size, low sugar content and poor storability. A soil test from your local state extension service or a commercial lab will tell you if you have adequate potassium, but if your fruit size is small, you may need to add some. Wood ash, he writes, is a good source of potassium, having about 6 percent potassium. I have read elsewhere that ash from charcoal grills should not be used in the garden.

Choosing a good site for your apple trees is important. For the home orchardist, apples will grow most anywhere, but full sun is best. Late spring frosts can damage blossoms and reduce fruit yields, so planting on a hillside is best. Cold air flows downhill and settles in low spots, which should be avoided. A hillside generally drains water better, which promotes healthy roots which can rot in areas with year-round soggy soils.

As a commercial grower, Bob Osborne has planted most of his trees from bare root stock. The prices are much lower than buying bigger trees in pots or balled and burlapped. For the home gardener only buying a few trees, potted trees are often the most convenient. Bare root trees are usually only sold in early spring when the stems are dormant, but potted trees are available in three seasons. On the other hand, there is a much greater variety of trees available for planting bare root.

In most cases, apple seeds do not grow into trees that are the same as the mother tree. As Bob explains in the book, McIntosh apples are all genetic clones created by taking scions and grafting them to rootstock. The original “Mac” was discovered in the early 1800s by John McIntosh in Ontario as a seed-started plant that he subsequently used for grafting.

Apple tree size is determined by the rootstock a scion is grafted to. There are four basic sizes: dwarf, semi-dwarf, semi-standard and standard. A few apples come on their own roots, and tend to be full-sized trees. Bob recommends semi-dwarf or semi-standard for the home gardener. Dwarf trees, he told me, need support all their lives as the root systems are not adequate to hold them up in a storm.

I asked Bob for his recommendations for the best apples to grow in a home garden. The best, he said, is Liberty. It is resistant to many common diseases, tastes great and stores well. But he warned, you need to pick it when it is ready – not too early or too late. He picks his on Oct. 6, but father south, picking would be earlier.

Next he recommended Novamac. It is resistant to scab, fireblight and cedar apple rust; it does not attract codling moths. It is tasty, keeps well, and its form is open and easy to prune. It can be picked early if you like a tart apple. Other apples he like include Sandow, Greensleeves and Pristine. See his book for more details on them, and many others.

It’s not too late to plant an apple tree this year if you find one in a pot that you like. Or you can start planting next spring. In any case, having Bob Osborne’s book will guide you through the process.

Henry is the author of four gardening books and is a lifetime organic gardener. He is available for talks to your local library or gardening group. Reach him at henry.homeyer@comcasts.net.