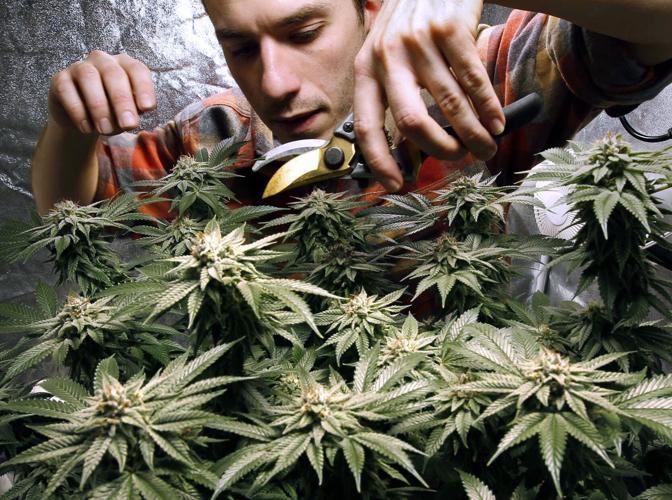 In this 2017, file photo, James MacWilliams prunes a marijuana plant that he is growing indoors in Portland, Maine. The Pine Tree State opened its adult recreational cannabis on Friday, as retailers blame a limited number of licensed manufacturers for reducing the variety of products available. 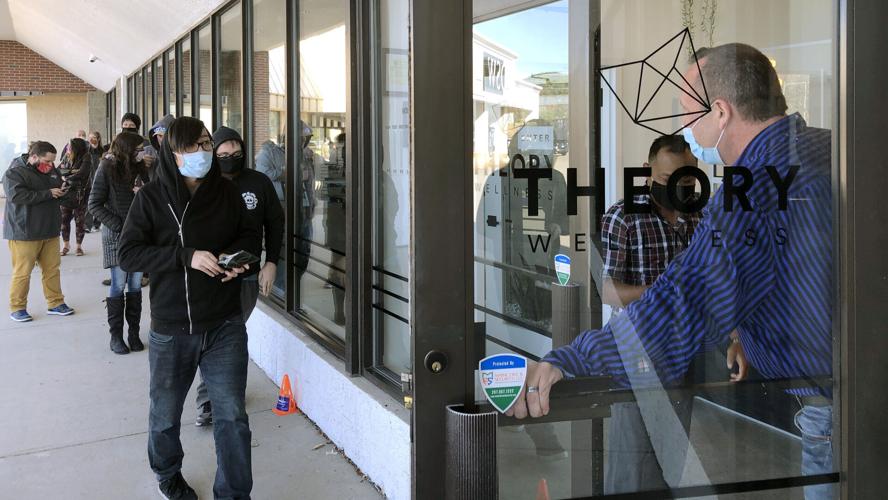 Buyers are let in to purchase cannabis products at Theory Wellness on Friday in South Portland, Maine. Friday was the first day of legal marijuana sales for adult recreational use in the state.

In this 2017, file photo, James MacWilliams prunes a marijuana plant that he is growing indoors in Portland, Maine. The Pine Tree State opened its adult recreational cannabis on Friday, as retailers blame a limited number of licensed manufacturers for reducing the variety of products available.

Buyers are let in to purchase cannabis products at Theory Wellness on Friday in South Portland, Maine. Friday was the first day of legal marijuana sales for adult recreational use in the state.

It took years and effort and significant compromise, but Vermont has finally passed a tax and regulate bill for the sale of marijuana and cannabis products containing THC, the psychoactive compound that produces a “high” effect.

But a lot of work remains to be done before recreational cannabis is sold in the Green Mountain State.

The three-person board is to be appointed by Jan. 8, but Scott has already told the Legislature that the timeline “is too aggressive and may need to be extended.”

The control board will be compensated for its efforts, with its salary tied to the salary of Vermont Superior Court judges — two-thirds for the chairperson, and one-half for the two regular members. In 2020, Superior Court judges will earn $160,777 per year; based on that salary the chair would earn $107,185 and the regular members would earn $80,388.

Nice work if you can get it, right? But don’t be distracted by the paycheck: That panel is very important and has heavy responsibilities. It will appoint an executive director — by law, that person “shall be an attorney with experience in legislative or regulatory matters” — and make rules for recreational cannabis establishments and medical cannabis dispensaries by June 1.

Additional responsibilities include setting guidelines for advertising — a significant concern of some House members who wanted none allowed at all — and rules for cultivators, manufacturers and retailers. Numerous, important details hang in the balance.

Scott made clear in his letter to the Legislature, informing them why he allowed the bill to become law without his signature, that its work isn’t done. Action items he cited include leveling the playing field for smaller operations and businesses owned by women and minorities, and addressing the historic impact of marijuana prohibition on people of color in Vermont.

That look could include, as Scott suggested, a “social equity applicant” category for cannabis licenses, for which applicants would be charged 50 percent less in fees.

“And in the event the Legislature maintains the current integrated licensing structure, to make it more equitable, revenues from those licensees could be directed to benefit social equity applicants and the communities historically most negatively impacted by cannabis enforcement,” Scott said. “Again, justice should be foundational to our work, not an add-on to be figured out secondary to commercial or other interests.”

You might wonder: What exactly is the historic impact that needs to be addressed?

Sen. Dick Sears of Bennington cited one telling statistic from a 2013 study: At the time, African-Americans were more than four times more likely to be arrested for a marijuana infraction than white Vermonters, despite the state’s overwhelmingly white population. That’s people arrested, perhaps convicted and sent to prison, and then having to overcome that conviction to obtain a job, housing or credit.

Sears, who has been among lawmakers on the conference committee that produced the final bill, said the Senate shared his concerns in some areas, such as the head start that state’s five medical marijuana license-holders have on the market at present.

Those licensees, including Phytocare in Bennington and Southern Vermont Wellness in Brattleboro, have the right to obtain vertically integrated licenses — allowing them to operate throughout the entire process, from seedlings to point of sale.

“There’s a concern there that we’ve done something that may take away the ability of the average Vermonter to get involved here,” Sears said. “We want to look at that again.”

Some states, including Washington, have sworn off vertical integration licenses over concerns they’re a gateway to “Big Weed” quickly buying up or elbowing out smaller entrepreneurs. But don’t forget that all business carries risk, and the higher cost of vertical integration carries greater risk — even for existing licensees.

There’s a parallel to be found in the craft brew industry: When demand grows, many smaller brewers hire others to make their beer rather than expanding their own capacity. Brewing and packaging equipment are not cheap. Neither are salaries, benefits, or workers compensation insurance.

Sometimes, outsourcing makes more sense than a huge capital investment. If you’ve ever been to the Harpoon Riverbend Taps and Beer Garden in Windsor, keep in mind that Catamount paid $5 million to build that brewery. Harpoon bought it for $1 million — 20 cents on the dollar — when Catamount’s business failed, despite the high quality of its products.

Then again, if and when medical marijuana licensees can hit the ground running with recreational sales, that’s sales tax revenue that helps the state pay the startup costs while other businesses get up and running.

Legislators backing the plan emphasized that tax-and-regulate was not about revenue. But the potential is there for excise and sales tax revenue that could pay for after-school programs and substance misuse prevention, and fund other wants and needs.

Speaking of which: Scott wants the 30 percent of excise tax revenue going to prevention programs gated off to the Department of Health for substance misuse education. Sears doesn’t disagree that’s where it should go, but he says the Legislature should make that call. “We don’t mind putting a fence around that money but it should be a legislative decision,” he said.

Sears would also like to revisit the Senate’s proposal to have part of the 14 percent excise tax shared with host towns of cannabis businesses. That proposal was lost in the compromise with the House, which instead wanted towns to receive funds from the fees paid by cannabis licensees.

“We want to look at that again. Four or five of us have begun conversations,” Sears said.

As for Scott: He used all the time allotted him to make the decision on the marijuana bill, and his letter suggests he had some misgivings — and heard concerns about addressing systemic racism loud and clear.

Naturally, there are election year politics to consider. By allowing rather than vetoing the bill, Scott can address opponents’ concerns while still allowing full legalization to move forward.

His election opponent, Lt. Gov. David Zuckerman, pointed out that he’s been for cannabis reform since he first ran for the Legislature in 1994. Like Scott, he is glad for progress and still sees room for improvement.

“Hemp, cannabis for medical use, decriminalization, and criminal justice reform have all been important issues along this path,” Zuckerman said. “The road has been long, and at each juncture, there have been improvements as well as additional steps that I wish were taken. In this bill, some elements of justice were accomplished, with priority for women and BIPOC-owned businesses for licenses, however, there are still more aspects to address during implementation.”

Sears, who said he talked with Scott, a former state Senate colleague, said he appreciated Scott’s deliberation on the matter — and thought his final decision made sense.

“Frankly I told him I didn’t think he was going to get more of what he was looking for if we had to start all over again,” Sears said.

VOTING INSTRUCTIONSHere again are the instructions for voting with the ballot the Vermont Secretary of State mailed to registered voters. (Didn’t get a ballot? Call your town clerk.)

Fill out the ballot with pencil or black ink. Do so privately, without any influence from anyone (unless they’re someone authorized to help you).

Place that in the return envelope provided by the Secretary of State’s office. The postage is already paid, so there’s no need to affix more stamps.

Mail it by Saturday, Oct. 24, keeping in mind that a postmark is not enough; the clerk must have your ballot in hand when polls close or it will not count.

If you do not deliver the ballot by Monday Nov. 2, you can bring it with you to the polls on Election Day and fill it out at the polling place.

Or: You can vote in person like you would in any other election. You can bring your ballot with you or they’ll provide you one.