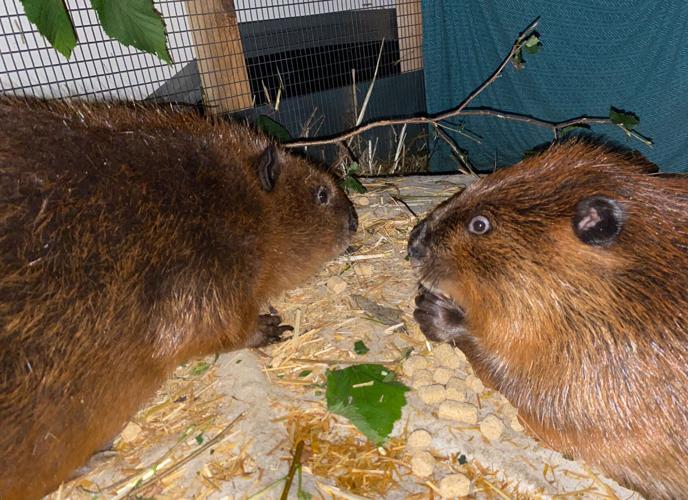 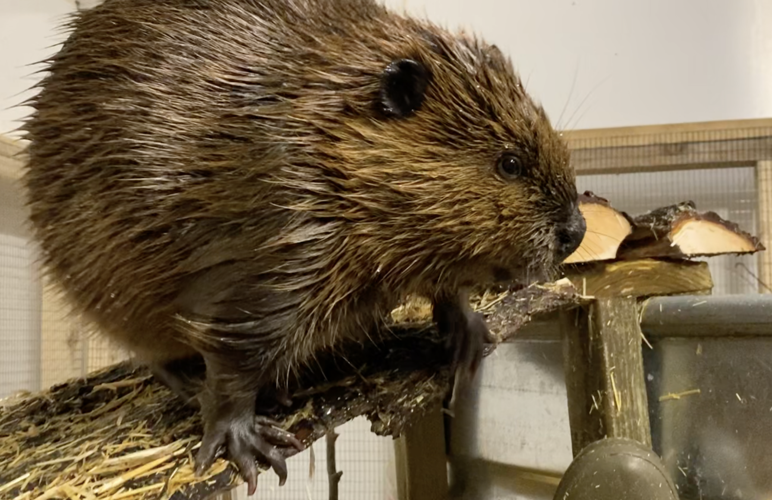 Pumpkin has always had important things to do. Beavers’ lives depend upon creating and maintaining the watery world that keeps them safe. Because he is an orphan, however, his work has been stymied. How does one deepen a metal tank? How can one harvest building materials on the other side of a fence?

In May, Pumpkin will turn two, the age at which beavers are ready to leave home. He is well-positioned for success. Not only is he large and well-nourished, he already has a mate. Pye had been badly injured as a yearling and joined Pumpkin in the beaver orphanage last summer. He adores her. She thinks he will do. Despite all of the talk about Pumpkin, Pye is the heroine of this particular tale.

I have had two years to find a release site for the beavers. A good one would be well away from humans and their infrastructure or in an existing pond where they would be welcomed. It would be at least half a stream-mile from other beavers (they are very territorial). The perfect pond would have abundant beaver food growing in or near the water. This would reduce time spent ashore where they are vulnerable to predators. With the clock running down, the perfect site eluded me.

One thaw day in early March, Pumpkin took matters into his own paws. He dug his way under the fence that surrounded his winter pond. The breach was quickly repaired, but now Pumpkin had found the key to freedom.

The release site I decided upon was far from perfect. There was little food next to the pond, and there were predator tracks in abundance. On the plus side, if I released the beavers there, I could set up camp and stay there at night, for a while at least, to keep the predators away.

Here was the plan: I would lure the beavers into pet crates and load them onto utility sleds. I had a team on standby to haul them through the woods to the pond. For two weeks, Pye evaded capture and I revised my strategies. Meanwhile, the snow and my expedition crew began to evaporate. On March 20, I was down to a crew of one, Will, who stays very fit so he can jump out of airplanes to fight fires. He would be leaving for California in the morning but was ready for action for one last night.

After waiting an hour with no sign of Pye, I began to worry. A few days earlier, the beavers had resumed digging and had created two new holes under the fence. These had been patched with rocks and wire. Could Pye have been fenced out? At 8 p.m., I decided it was time to look for her elsewhere. I knew there was another little pond downstream. If she did get out and avoided predators, I would likely find her there.

The ice-covered pond was surrounded by a thicket. As I worked my way around it in the dark, I came out on a little grassy peninsula with a few big conifers. I noticed a little freshly disturbed earth. Was that done by a beaver? Then I saw the ripples in the water and heard Pye’s greeting — a deep, low hum. Pye, who has remained wary since she arrived, was glad to see me.

I had known of this pond but hadn’t considered it as a permanent release site because it is too small for long-term residency, and downstream they would encounter conflict zones where they might be shot or trapped. Still, as a temporary situation, it was perfect. Yes, there were coyotes in the neighborhood, but with a border of beaver edibles growing in the water at the pond edge, they would have no need to roam beyond the water. What’s more, previous beaver occupants had left behind a burrow in the bank as a starter home.

It was almost 9 p.m. when I knocked on the door of the pond’s owner. I could tell you lots of wonderful things about George, but for the sake of brevity, I will just tell you that he agreed to offer the beavers temporary sanctuary in his little bit of paradise. Now, I just had to get Pumpkin there.

Back at Pumpkin’s pond, I moved some rocks and he swam up under the fence. When Pumpkin emerged on the freedom side, his whole body conveyed the awareness of a momentous change. But was this a good thing? When I stood and began moving toward the woods and George’s pond, Pumpkin glued himself to my heels. By the time we were halfway there, I relaxed and enjoyed the singular experience of going for a walk in the night forest with a beaver. Pumpkin’s tail dragged in the leaf litter as he bustled to keep up. Once there, he slipped into the open water at the edge of the ice. I followed the sound of exuberant squeaks to the beaver pair. Under a thicket of holly, Pumpkin climbed all over Pye like an excited puppy.

Stars glittered in the deep black of a moonless night. A saw-whet owl tooted in the distance. Two beavers toured the pond making scent mounds, the sweet complex fragrance announcing to all that this was their home. Within this confluence of wonders, the trials of raising beaver kits seemed trivial. I thought with gratitude of all who had helped along the way. I wished they could have been there to share the jubilant experience. It takes a village to raise a beaver. Pumpkin swam up and squeaked to me, and then set out to do the things a beaver needs to do.

Patti Smith is a wildlife rehabilitator and naturalist at the Bonnyvale Environmental Education Center. The View from Heifer Hill, a feature on the nature of our region, appears each month. Patti welcomes your feedback at patti@beec.org. Visit the Wildlife Rehabilitation page at www.beec.org to see video of Pumpkin and Pye at their new pond.