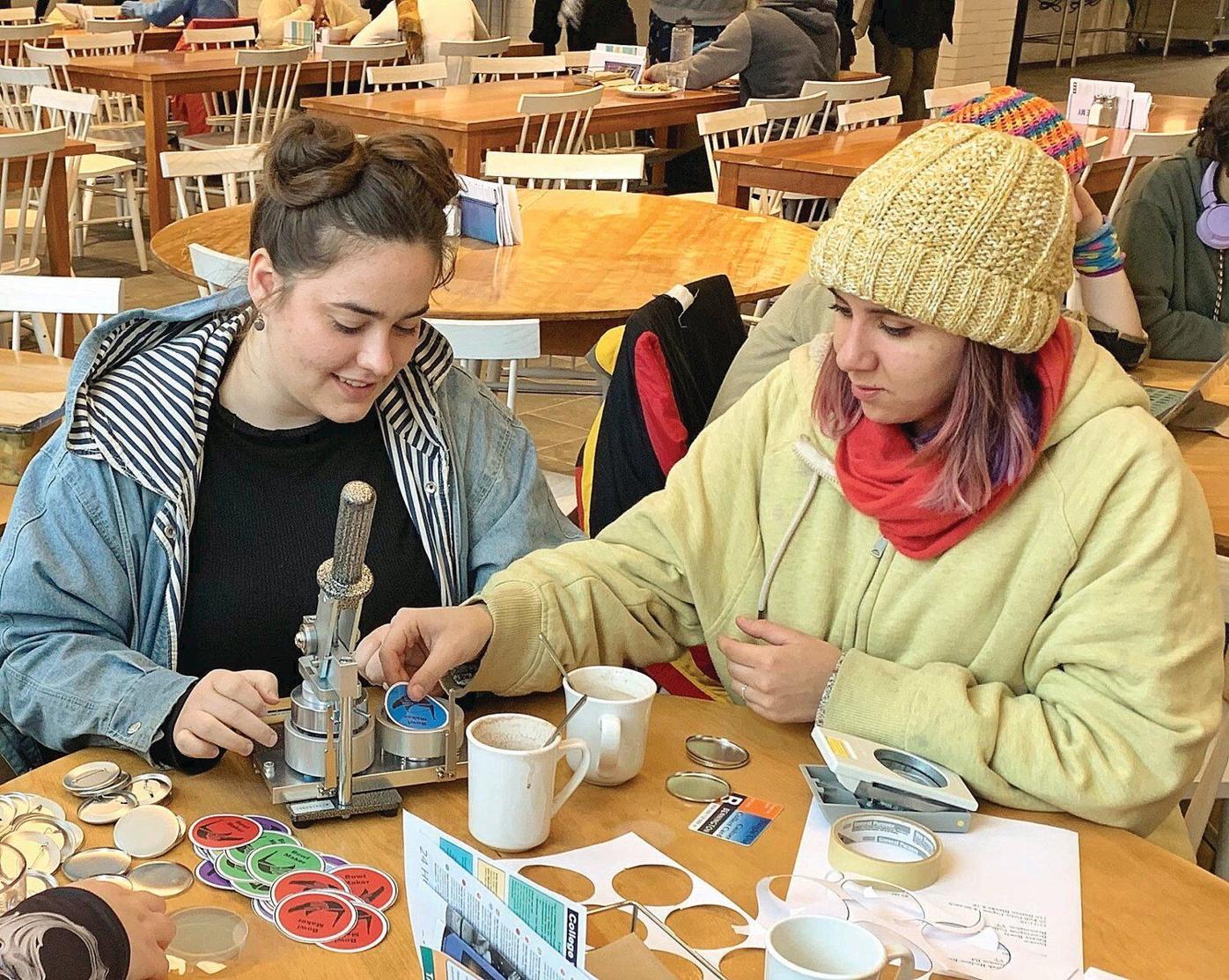 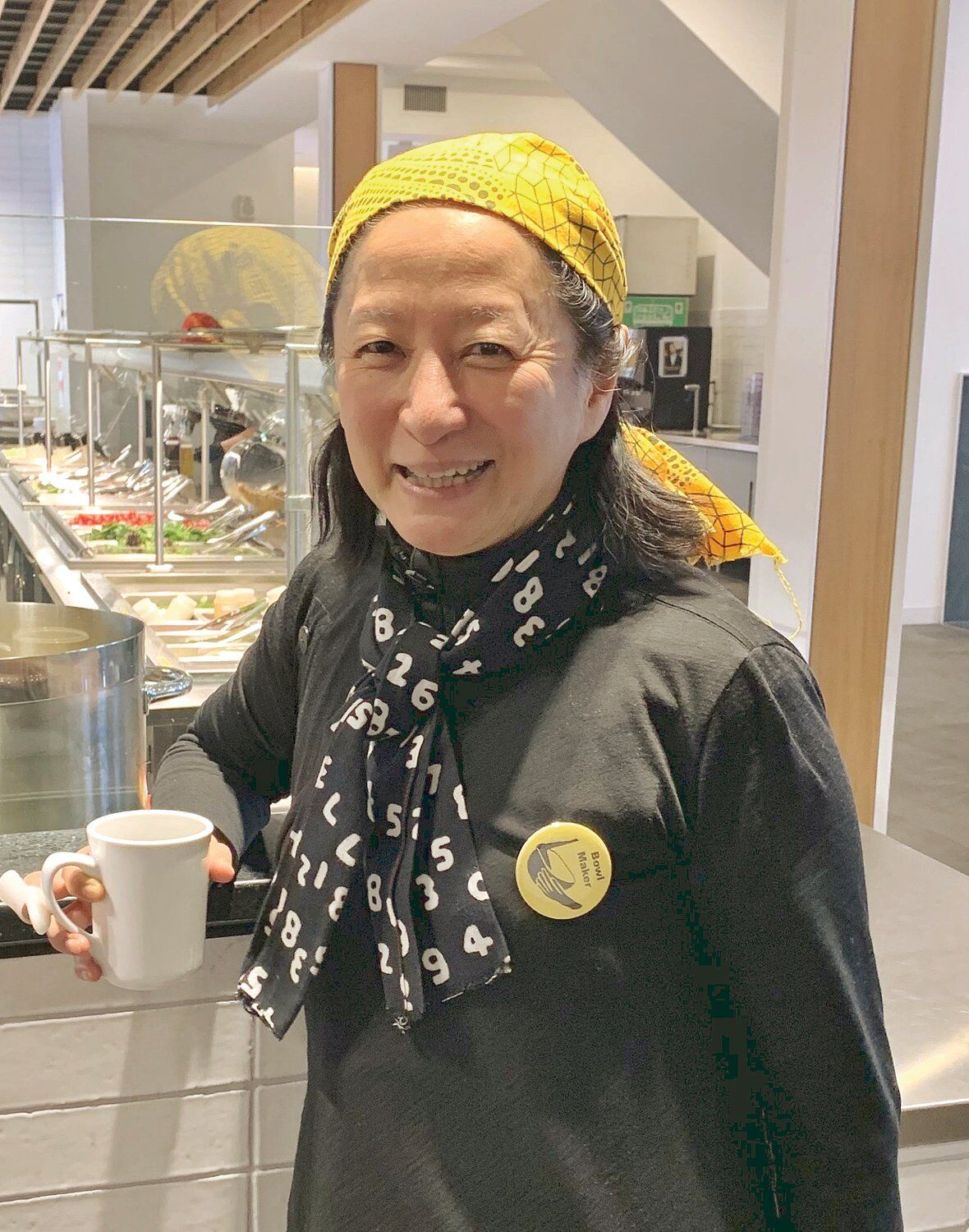 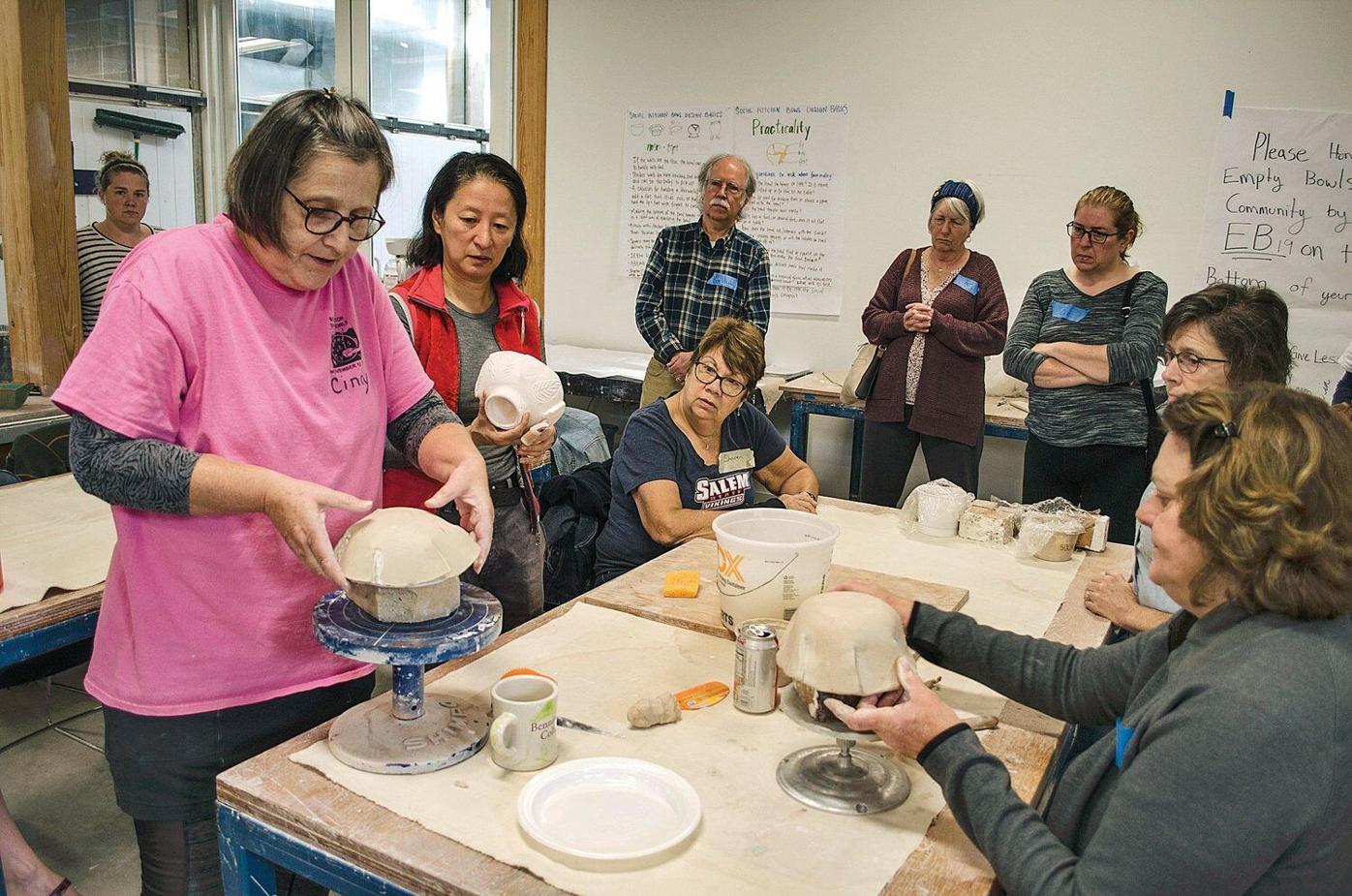 Cindy Hudson-Knapp demonstrates how to shape a bowl over a form as Yoko Inoue, a member of Bennington College's art faculty, looks on. Inoue and students in her Social Kitchen: Ceramics, Food and Community class are working with Greater Bennington Interfaith Community Services on the Empty Bowls project. 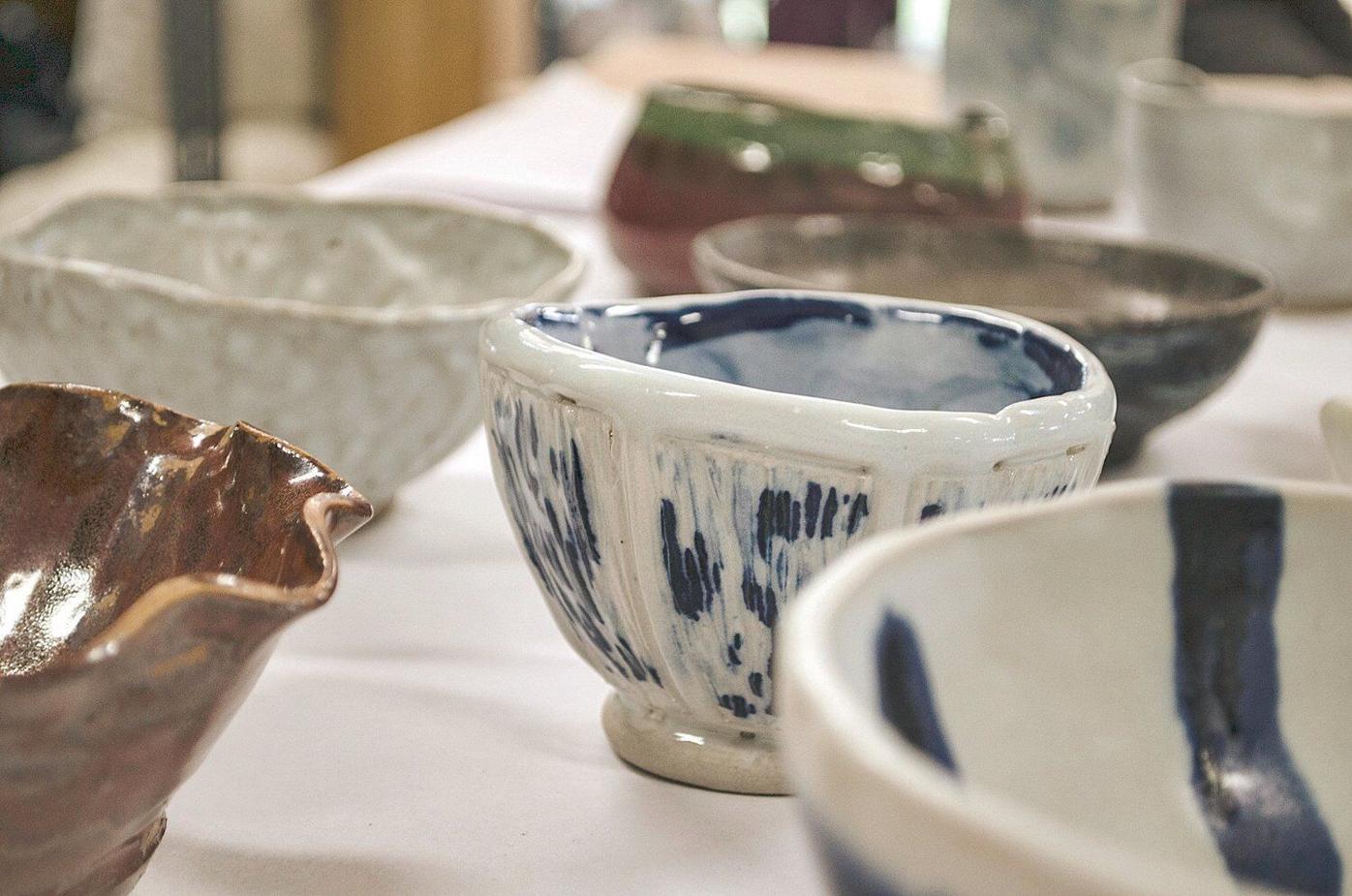 Some of the bowls made for the Empty Bowls event on display.

Cindy Hudson-Knapp demonstrates how to shape a bowl over a form as Yoko Inoue, a member of Bennington College's art faculty, looks on. Inoue and students in her Social Kitchen: Ceramics, Food and Community class are working with Greater Bennington Interfaith Community Services on the Empty Bowls project.

Some of the bowls made for the Empty Bowls event on display.

She agreed to start a dialogue about food insecurity in the region. This fall, the conversation took the form of a new course, "Social Kitchen: Ceramics, Food and Community," which aims to "provide an opportunity to learn about creative community engaged practices, with food and politics in mind, in contemporary art." Students explored the issues of local food insecurity in the Bennington region in a larger, global context.

Inoue has long been interested in food issues in Japan. She described the Trans-Pacific Partnership trade deal as a threat to Japanese agriculture. In 2014, she completed a thematic residency on Food Justice at the Santa Fe Institute in New Mexico. She applied to investigate the Trans-Pacific Partnership "and how we can think about food as a medium to be able to talk about politics. So that was, in a way, transformative."

Inoue began thinking about how she could create a Center for the Advancement of Political Action course at Bennington combining "craft knowledge and cooking and food justice all in one."

Around this time, then-new college president Mariko Silver was talking about narrowing the gap between the community and the institution — and then the request for bowls came from Greater Bennington Interfaith Community Services.

In the new course, students made their own clay and made hundreds of bowls with community members at the college's ceramics studio. Students did service learning at the interfaith group's' Kitchen Cupboard food pantry and did outreach with local establishments such as the Bennington Farmers Market and Stewart's Shops. The course included reading assignments, research projects,activism and socially engaged art practices. Attendance at the Empty Bowls event on Nov. 17 at Mount Anthony Union Middle School In Bennington was mandatory.

Inoue said there are many types of events within the Empty Bowls movement. In some, potters donate bowls but then don't go to the event itself.

"It's not about reciprocity. It's not about solving the problem or even recognizing the problem," she said. "We need the community knowledge. This is the asset that the students really have to focus on that maybe we cannot teach in an academic institution."

She added, "And this is precisely what we need for the future generation. What does it mean to be a citizen at this time and for the future, and how they can witness the diligence of care and empathy and responsibility and hard work."

On Nov. 12 at the Bennington College Commons, students in the course worked at various tables, making identity buttons for participants and making soup, all for the Empty Bowls event.

Three students sat at the table near one of the main entrances. Sophomore Jacqueline de Loos said as an international student, it's easy to forget that there's a whole other local community surrounding the college.

"It's been really nice to have a project that kind of ties everyone together in the best possible way," she said. "I think it's a really beautiful thing."

Libby Green, also a sophomore, said the course has connected her with the community much more than before. "I think this is the first step of hopefully what will be a lot more to come of the college getting involved in the community," she said.

More than just volunteering, "this was more like a community exchange where the students are getting something out of it and the community members are, so it's more of an equal relationship," she said.

Ruby Dix, a junior, said it was good to have people from town visit the campus to make bowls. "I think a lot of the disconnect is that they don't come up here, we're sort of up on the hill away from town," she said.

Mari Schiff is a first-year student who hails from a town in Maine she described as similar to Bennington, both economically and in food insecurity issues.

At the Kitchen Cupboard, she said, "I was always interested in what the patrons gravitated towards."

She added, "My favorite part, personally, was actually interacting with the community, and I'm not saying that just to be a kiss-ass."

Raven Realmuto, also a first-year student, was part of a group of three students and one community member making ID buttons for the event. She grew up in Shaftsbury.

"And I was also really happy to engage with the community in a different way, like inviting them onto the Bennington campus to make bowls, which I thought was really cool," she said.

Joya Corr, another first-year student, said she learned in the class how to collaborate with people of different backgrounds and how to reach out to the community.

"Raven reached out the community and got a bunch of vegetables donated to make soups and stuff," Corr said. "All you do is ask and just be open and welcoming to whatever people have to offer. And that's, I think, an important lesson that I learned from this class."

Helping make the buttons was Lucinda Hudson-Knapp, who is retired and an active supporter of Greater Bennington Interfaith Community Services.

"It's been really fun to work with the energy that the students have and really encouraging to see how passionate these students are about what they're doing," she said. "I've been working with GBICS on other projects as well, and I feel really passionate about the services that GBICS offers to the community.

"You talked about the separation of the college and the community, but I often hear people talk about the guests at GBICS as 'them,'" she said. "And this project sort of really blasted through a lot of those barriers as well. So it's been really neat to see."

Mark Rondeau is the Banner's night editor. He can be reached at mrondeau@benningtonbanner.com.