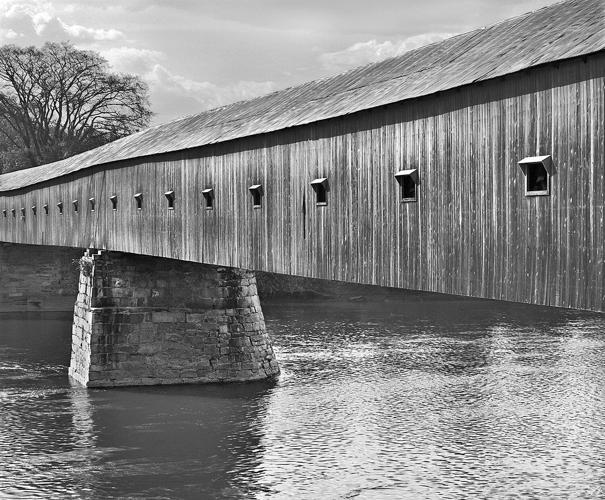 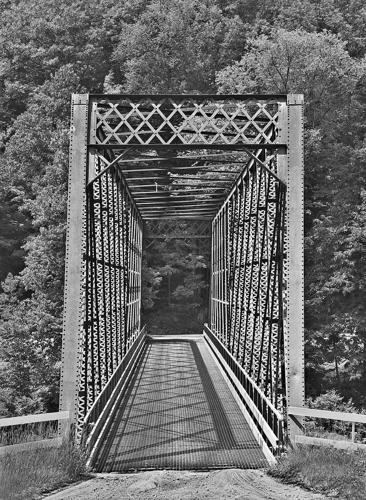 BRATTLEBORO — David Plowden is a renowned photographer of the changing American landscape, especially the West and Midwest. He has lived in Illinois for four decades, but in his youth, he lived for a time on a farm in Putney, Vermont. In 1943, at the age of 10, Plowden took his first photograph at the Putney train station. We spoke with Plowden about his connections to southern Vermont and about the exhibit David Plowden: Bridges, on view at the Brattleboro Museum & Art Center through Sept. 23. This interview has been lightly edited and condensed.

We bought the farm in Putney from Thurber in 1939, I think, before the War. I was six or seven. My mother picked out the farm because her sister lived in Dummerston and was married to Ellsworth Bunker, the ambassador. During the War we spent quite a bit of time there — some summers, some winters. When I went to Yale, I used to come up with friends and we would stay there. I loved the farm.

We had a farmer in the beginning. He was a wonderful fellow. He lived in Vernon. I learned to drive a team with a full load of hay into the barn. I was young — 12, 13, 14 — and I loved it. I adored being there. I learned how to run all kinds of machinery.

I went to the Putney School, and that's where I learned to print photos. George Heller [BMAC Trustee Emeritus] was a friend of all of us, and he offered me a job to come and help him bale hay. It was my first paying job. It was quite a while ago.

We had to go to Brattleboro for big shopping: the Grand Union; wonderful department stores; Goodnow, Pearson, and Hunt. I remember seeing Lawrence of Arabia at one of the two movie theaters in Brattleboro. But the place I loved best was the railroad station, which is now the Brattleboro Museum & Art Center. I spent hours there watching trains. When I was older, I'd drive to the south end of the railroad yard, to the roundhouse, where they serviced engines. I knew all the train crews, and I got up in the cabs of the engines, and I'd ride with them. I knew Mr. Burns, who was the brakeman on the train that arrived in Putney at 6:20 in the evening.

There used to be a gate man in Bellows Falls with a little shack, and he'd crank the gates down. There were enough trains then that they needed someone to do that. It was a busy railroad. At train time in Putney, the train was jammed. Mail came in by the train, and all kinds of freight. Putney was the end of the double track, southbound. Putney to Brattleboro was single-track, so you had to get clearance that it was okay to go. In the war, the trains operated 24 hours.

I loved Vermont, I really did, and I miss it very much. I've been a Midwesterner for 40 years, and I've always photographed. I did a massive amount of work here and on the West Coast, so the West has become my bailiwick, my canvas. But my experience in the country and in a small town in Vermont has been a very important part of my photography.

I remember when they brought the interstate highway, that ghastly road, 91, up the Connecticut River, and I photographed the horror, the things that changed, and how devastating the Interstate was to the lovely Vermont valleys. It came up through the best farmland. I went to town on showing the devastation they created. And I've always photographed the devastation created by the modern world.

My work is very much about the change that I have seen in my lifetime through the places I have lived, and how much things have changed and disappeared. I started with the steam engine. I photographed the steel mills in Chicago. Then I did photographs of land. I've done 22 books that I wrote and another seven that I illustrated. I worked for all the magazines, all the ones that are no longer there - Life, Fortune, Vermont Life. I knew the editor of Vermont Life very well, and he always had an assignment for me, or two or three.

I had subjects I would really delve into for books. I loved doing the research. When I was working on "Bridges: The Spans of North America," I had a desk in the Smithsonian archives. David McCullough was writing his book on the Brooklyn Bridge at the same time, and we met at the Smithsonian a great deal and gave information to each other. I loved doing the research, finding out who built the bridges, and why, and when they were torn down. And I loved the people I met in all of these projects.

I've taken probably 16 miles of film, and that's a lot of film. These days I'm going through and scanning it into Photoshop. I'm finding pictures that were never printed, or printed years ago and very badly, or printed and sold. I'm reprinting a lot of material, most of which has never seen the light of day.

My reverence for the land started in Putney, and my feeling that if you own land, you take care of it. Out here, everything is plowed up and planted. It's devastated the natural world.

It's the people in the small towns who made the small towns, who built bridges and railroad trains. And they were my heroes. I grew up riding steam engines when I was 12 years old. It was part of my life. In New York, I rode the tugboats and the ferries. My bedroom looked out on the East River and the Queensboro Bridge. As a little kid, I figured out how the bridges worked by looking at them. A bridge is a magnificent work of engineering, just to look at.

You have a very small but representative selection of bridges [in the BMAC exhibit], which are part of a very major work. You have one on the West River which I printed for BMAC, that had never been printed before.

I have very, very happy memories of Putney. I loved being there. I think I dream about it, too. It was real country, no-nonsense country. It was an honest-to-God farming community with a paper mill and working farms with barns. We were in the good working countryside — there were no people walking around with high hats. This was a real working community, and I loved it. That's where I got my taste for real work, and that's what I've been doing all my life.

It all started in Putney.