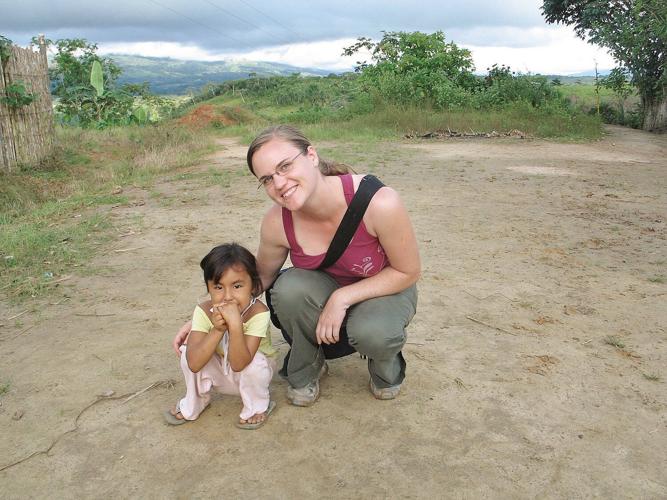 Angela Snow in Yantalo in the making of "Mortality of Dreams." 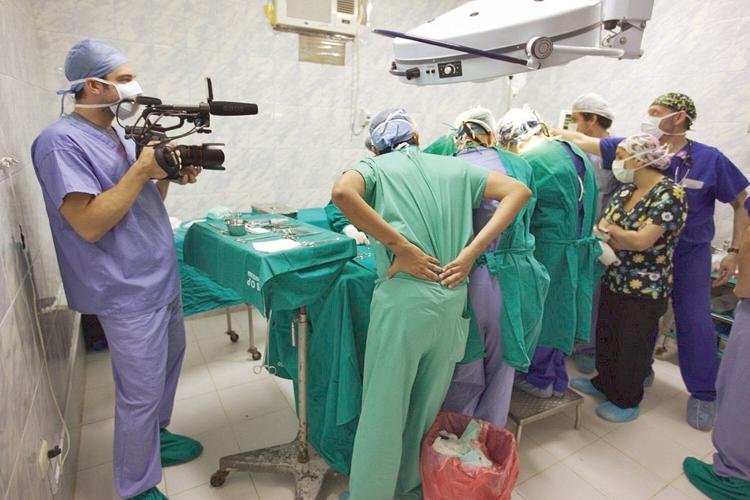 For "Mortality of Dreams," Josh Gibson films in Moyobamba before clinic opens.

Angela Snow in Yantalo in the making of "Mortality of Dreams."

For "Mortality of Dreams," Josh Gibson films in Moyobamba before clinic opens.

BRATTLEBORO — When Angela Snow decided to put down roots in Brattleboro last year she had no idea she would end up buying a house directly across the street from the hospital where she was born 33 years ago. She grew up in Dummerston until age 8, was homeschooled and also attended Hilltop Montessori and Marlboro Elementary School. Snow said that "Brattleboro has always felt more like home than anywhere else in the world."

Her latest documentary film "Mortality of Dreams" will show at the Stone Church Oct. 11, 6 p.m. October is National Hispanic Heritage Month so she timed her screening for this occasion.

The film was recently released and screened at the Children's Hospital of Wisconsin. It was an official selection at White River Indie Fest, which included a panel discussion with Dr. Dean Seibert, MD, and Gerd Gem nden, a professor at Dartmouth College. It was also shown at the Global Ideas Lab at Alfred Hospital in Melbourne, Australia. In December, it will be shown at UCLA, David Geffen School of Medicine.

Filmed during a 10-year period with over 400 hours of footage, "Mortality of Dreams" follows the construction of a sustainably designed, state-of-the-art, and international volunteer-run "green" hospital in the village of Yantalo, Peru. This hospital was the vision of Dr. Louis Vasquez an 81-year-old retired cardiologist who wanted to leave his legacy in honor of his late mother. "Mortality of Dreams" is an intimate portrait of Dr. Vasquez and a jungle village as they both undergo huge transformations. The film touches on many different themes of global health, volunteerism, sustainable design, economic inequalities, Latin American heritage and most importantly of following your dreams.

Snow remembers cold-calling Dr. Vasquez in 2006 and he responded by saying, "Come to Peru, film one of our tours and also come to my mother's home village where I'm starting a foundation to help residents with health care and education." So in 2007 Snow and her business partner Josh Gibson found themselves in Lima, Machu Picchu and then Yantalo where the story begins.

The film chronicles the transformation of a village, unchanged for 100 years, held back by government, as it learns to make changes on its own. It takes viewers inside this tiny Peruvian village, inside the life of its people and tells the story of international volunteers who staff the hospital. Snow added, "In 2007 there were no restaurants or stores in the village, no paved roads, and now there are." Dr. Vasquez's mother was from Yantalo although he had never visited there until after her death in 2005.

Snow explained that it's also a story about health care. "Dr. Vasquez looks for a way to provide top health care for all, regardless of one's ability to pay. He has created a universal model with volunteers from around the world, top physicians from universities and hospitals who visit Yantalo yearly to help Dr. Vasquez with his dream," Snow said. She enjoyed getting to know Dr. Vasquez and added, "Vasquez always wants to know what our dreams are and what we are excited about. It was about him believing in us and us believing in him and the worthiness of his work and dreams."

"Mortality of Dreams" was directed and produced by Snow and is her second feature film. She is based out of Vermont and New York. Her business partner, Josh Gibson is a cameraman based in Los Angeles, and served as the cinematographer and did the sound for the film. An online "Spark and Seed" fundraiser raised nearly $11,000 to help cover post-production costs. Snow hired Editor Lila Place and they worked via Skype over an 11-week period since Place was in Italy at the time. She hired Charles Newman to create the original music for the film. He also composed music for "World Circus," Snow's first feature documentary, which screened at NECCA and major U.S. film festivals in 2013. "World Circus" picked up a distributor from the film festival circuit, where it was a big hit and the film is available worldwide on iTunes and other video-on-demand platforms.

To the Moon Productions

Snow started acting at a young age and remembers when she was 8 years old her family had moved to St. Louis (she stayed there through high school) where she bought a High 8 video camera and with her friend made videos and radio commercials. Snow attended Columbia College Chicago in Illinois, where she studied film production and acting, graduating in 2006 with a BA in film directing. It was there that she worked on many films. Her practicum final was a film about a gothic fairy tale set in a mansion with children and a robot. She recounts that "All film school was about narrative, fantasy and make-believe." She got into documentaries when she moved to Hollywood and worked in an office and realized it was pointless and she just wanted to make films. Snow quit her day job. By coincidence, Gibson, a classmate from college, sent Snow a preview of his new documentary. She seized the moment and suggested they form a production company. He agreed and in 2006 To the Moon Productions was created. The plan was to make promotional videos for travel companies. She had early success with three tour companies who hired them to make promotional videos in Greece and Peru.

When asked about her move back to Brattleboro, Snow stated, "Art is really central to Brattleboro. The filmmaking community is really strong here. People move to Vermont to hide out and be more introverted but the art brings them out."

The film "Mortality of Dreams" will be shown on Thursday, Oct. 11, 6 to 9 p.m. at The Stone Church, 210 Main St. The screening includes: free sausages from Vermont Packinghouse (plus a veggie option) and a cash bar from 6 to 6:30 p.m. The screening is from 6:30 to 8:30 p.m. including a Q & A session with the filmmaker after. There is a $10 suggested donation, but any amount will get you in the door. More information is available at tothemoonproductions.com/yantalo or find them on Facebook.

Victoria Chertok is a writer and public relations professional with a focus on higher education and the arts.