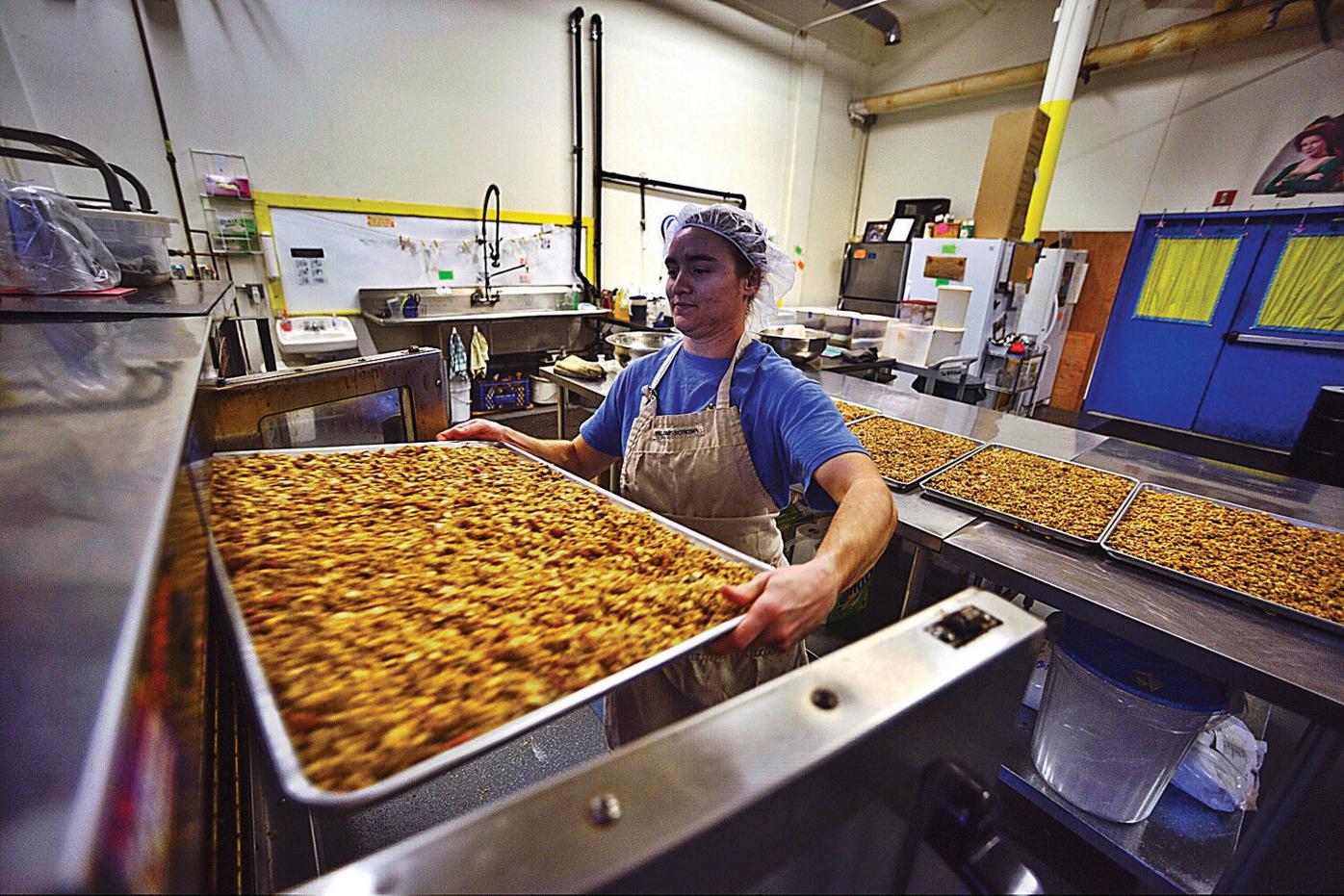 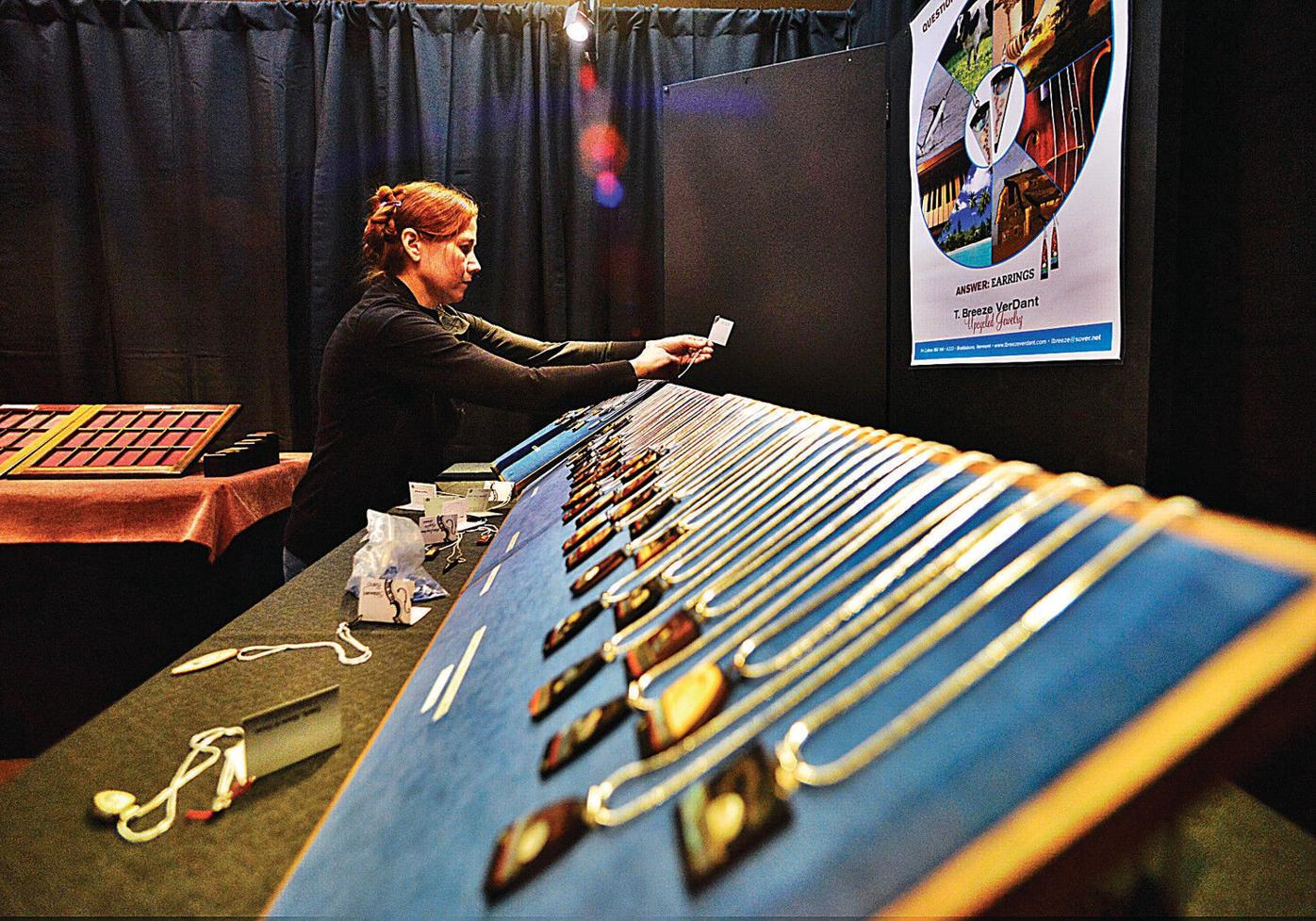 Each year I've gone to see what's cooking — literally and figuratively — in that massive 100-plus-year-old complex. Once married to an architect, I understand the language of adaptive reuse; I value historic preservation, and I've honed a respect and appreciation for old buildings, old materials, noble craftsmanship.

What a joy it was to enter the Cotton Mill for the first time. With 20-foot ceilings and massive windows, it's time-honored and well-worn. The floors boast decades of myriad uses and , looking up, one still can spy vestiges of mill machinery. The Mill was built by the Chace family in 1910. Utilizing electricity generated by the Connecticut River, it opened as Fort Dummer Mills in 1912 with 300 employees and eventually merged with Berkshire Fine Spinning Associates which then became Berkshire Hathaway. Having closed in 1956, the Mill complex was purchased and repurposed in 1994 by the non-profit Brattleboro Development Credit Corporation (BDCC) to be an incubator space for local industry.

Having done so much holiday shopping at the CMH open studio and sale over the years — always the first weekend in December — I wanted a closer look. I'd been a fan and former board member of the renowned Vermont Jazz Center, which holds forth on the second floor, but I didn't know much else about the Mill and its enterprisers.

Talking with several CMH tenants, I discovered one common thread: While they love being in an historic location, it wasn't the history that made them want to be a part of the building; it's the other Mill tenants. They believe in the benefits of adaptive reuse of old architecture, but it really is being among others with an entrepreneurial spirit who are creating, thinking, experimenting, baking, and churning, that matters most. It's being among people who work there every day earnestly and tirelessly, to make their mark — and their living.

I first dropped in on Brian Mooney, creator of The Storymatic and a former Marlboro College visiting professor of writing. Preparing for one of his many fiction workshops, he once found himself more immersed than usual in the preparation of writing prompts. Always eager to find something new and effective, he developed word and phrase prompts in several categories, which eventually boiled down to two. This streamlined set was embraced by students who prodded him to make them available to other budding writers. Thus, The Storymatic was born.

In a neat little box are dozens of cards, the uses of which are mushrooming: Writers use them; improv comedy leans on them; artists find them inspiring; ad agencies warm up creative sessions with them. They've even shown up in writing rooms in Los Angeles where scriptwriters throw out plot twists. Mooney muses, "It's fascinating to see what people are doing with this thing that started out as pieces of paper in brown paper bags."

The Storymatic was soon joined by Rememory and more products are in queue: They're seen in book, museum, gift and theatre stores; at book shows, and on teachers' desks, as well as in catalogues for home schoolers, educators, and lifestyle trend setters.

Mooney grew up in Housatonic, Mass., where mills were the core of the small town's life so he's grateful to be part of a movement that salvages old buildings. "I connect [this place] with what I grew up with I'm so glad this is not just a big empty husk of a building, a blind spot in the imagination. "

For five-year tenant Mooney, the Mill actually sparks imagination. "The smells here of maple syrup and leather and wood and granola — even sweat when you walk by the dance studio — it's people working and making things and the smell of this place is incredible. It inspires me as soon as I take my first breath of the day here." The physical environment provides inspiration, too, "I love that we have high ceilings, so I have room to think."

"The social infrastructure is really positive," Mooney said, but he also takes advantage of professional development offered at the Mill by the BDCC. "I went to a class recently about tech tools that Instigat8 put on. I love that this place — as an incubator — is very supportive, that they're offering workshops, classes, opportunities for business growth."

Rosie Schulick is Rosie's Wonders. With a solid background in art that rooted at Putney School and developed at Bennington College, Schulick created paintings and jewelry before she got into card making. She calls them "connection" cards, not greeting cards and, through her wistful voice and animated face, I believe her when she quotes the research: Receiving a card — especially unexpectedly or on a non-occasion — has proven to improve one's health.

Schulick expresses an inimitable style in her work, simple but lovely. Some of her accounts have asked for glitter and clutter but she holds her own: Less is more. As she talks about her wonders, she explains being inspired by nature, by the energy around her and by animals. Her commitment to environmental responsibility is clear in her use of 100 percent recycled paper and plant-based sleeves for her products.

Appearing in 100 different shops around the United States, she also sells through word-of-mouth, the Brattleboro Farmer's Market, at trade shows, and on line. While she works largely solo, she is fueled by the atmosphere of the Cotton Mill, "It's wonderful. There's a liveliness of community and a great vibe of energy here where small and large businesses are working all day every day. I love bouncing ideas off colleagues. It's hard to make all decisions by yourself."

She comments, too, that it feels good to be in an historic building and to be part of a force that continues to spare it from the wrecking ball. "How they brought it back is wonderful."

As Schulick looks forward to the Open Studio, she notes that people come from all around — New York, New England, beyond. "They're often here for the weekend to enjoy all of what Brattleboro offers. Cotton Mill is one of those draws — so many different artists, different skills."

Metalsmith Will Alderfer grew up outside Philadelphia where he first learned blacksmithing in nineth grade at a Waldorf school. Throughout high school and college, Alderfer was fortunate to have had great mentors who taught him essential and esoteric techniques of metalsmithing.

Of late, the lion's share of Alderfer's work is custom wedding bands. Most of his market is word of mouth, which was a conscious business decision made to maintain a closer, one-on-one connection to his clients.

Alderfer benefits from the incubation character and the entrepreneurial environment of the Cotton Mill where he's been for a year and a half. Having previously worked for and by himself in the basement of his home, he eventually realized that his creative process needed people. He needed to be around others working hard at what they're called to do. "Cotton Mill is nice balance of community and aloneness," he muses, as he notes the diversity of work in which his colleagues engage at the Mill. He believes that the building itself also plays a positive role. "Old buildings have a lot of character. This is a more creative space with its long history and its repurposing, as opposed to what a new industrial building would feel like. This is more of an authentic space and there's a genuine spirit here. A community of friends among artists."

Ingrid Chrisco started True North Granola in her kitchen 12 years ago when she was still a middle school principal. As True North outgrew her home, Chrisco was afraid of burning out at school. "I wanted to prove I didn't need to work that long at a job to be good and effective." In contrast to her "day job," she found that mixing raw ingredients with her hands was meditative, different and gratifying on another level. She took that as a cue.

Without a lot of capital, True North started as a small cash-based business. Chrisco said, "We'd send an order and ask that the customer return a check. " Now True North is a bustling business yielding 60,000 pounds of granola in 17 varieties this year alone — all produced at Cotton Mill Hill.

The company now employs 12. Her husband, Franklin, once a reluctant participant, is now a major team player and partner in managing the work that comes with increased volume. In terms of markets, 80 percent is self-distributed, and 75 percent is wholesaled to hotels, hospitals, and school districts. Individuals buy True North online, at farmers' markets, and festivals across New England as well.

"For us to be in the Cotton Mill has created a community of people we have loved engaging with. It's very energizing and affirming."

As True North grows, they plan to stay at the Cotton Mill, acquiring new and shared space and equipment. "Cotton Mill is a stunning building," she adds. "I grew up around Lowell, Mass., and I had family members working in mill buildings" such as Cotton Mill was in its first life.

Inlay artist T. Breeze Verdant has been at Cotton Mill for 14 years, having moved from a Williamsville barn where he'd worked for several years. It became clear that, he said, "I needed a better studio, and I needed to be around people."

Being in the Mill's creative environment, he speaks of artists as being good, reliable business people as he underscores the benefits of filling smaller spaces with a range of enterprises, arts, and industry.

Verdant's work has evolved from specialty boxes that were a combination of marquetry — the creation of an image using finely cut and scorched veneers — and inlay, the process of gluing wood to wood. As the economy became more dubious and his artistic vision expanded, he began to specialize in jewelry which comprises the bulk of his work now.

"Big windows facing east" are among the many advantages of being at the Cotton Mill. Another is the people, even though, Verdant explains, "I have to close the doors so I can focus. I get easily distracted, but I like the fact that there are people all around me. I do have conversations, but we're all here to work."

Verdant `s work is seen in dozens of galleries across the United States and his business is steadily growing. "As my intention has gotten clearer, especially after a long meditation retreat a couple years ago, it seems like my business has been more successful. I'm creating product I believe in, and in this case that's especially because I love the recycled aspect of my business and the sources of my materials," which include ebony from a shipwreck, copper from piano strings, swordfish bill, driftwood from St. John and Martha's Vineyard, shipbuilders' and bow-makers' scraps. The list goes on.

Verdant respects the architectural and community history of the Cotton Mill. "I love old buildings." But for Verdant more than anything else, and for his fellow residents, it's clear the building is "a place to produce and a place people to come to."

It's about the people — from the administrators, to the support staff, to the creators themselves . I'm looking forward to seeing them all in action — artists, musicians, bakers, cooks, crafts peopl e — when the calendar first turns to December at Brattleboro's Cotton Mill.