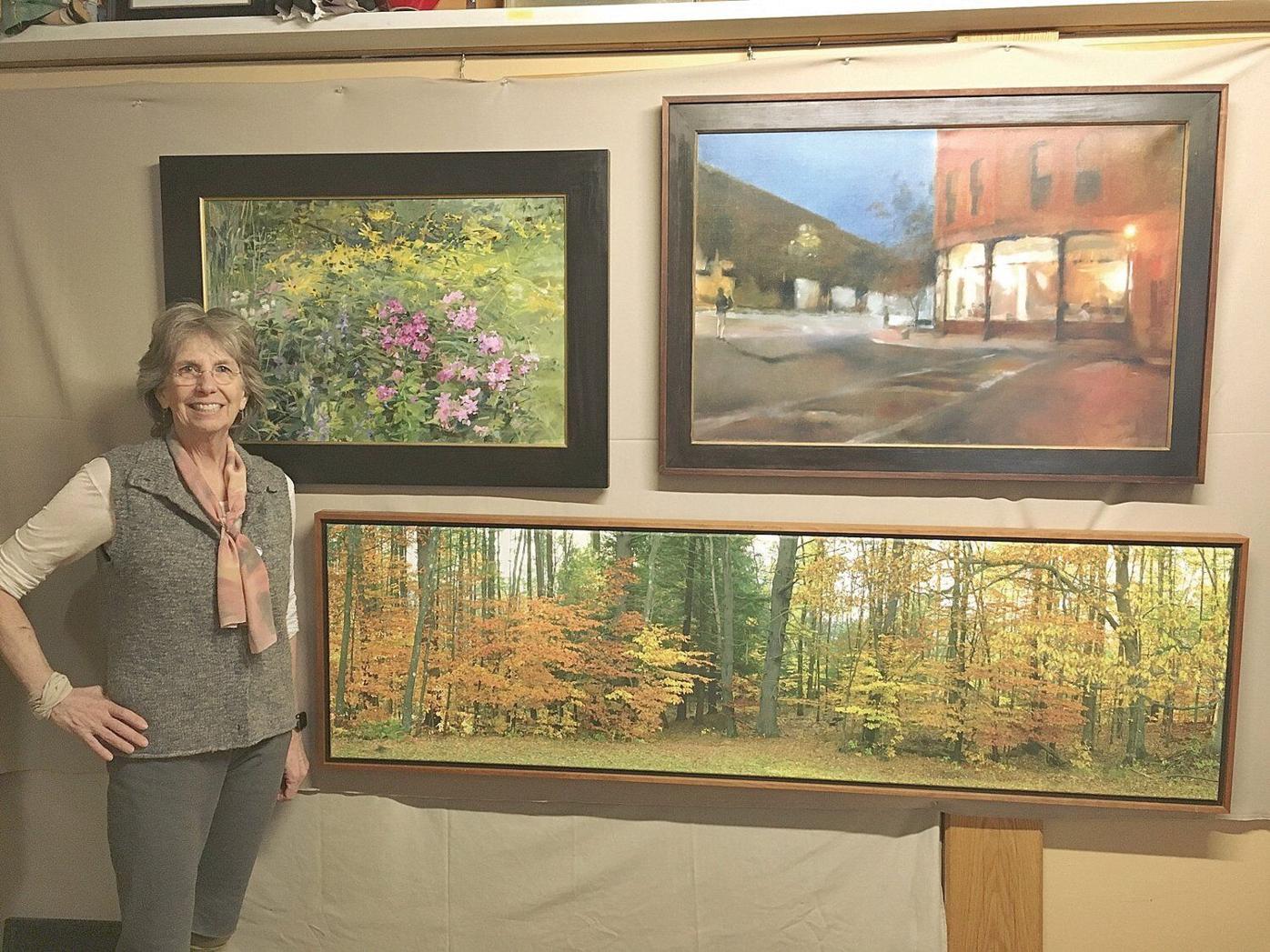 Putney artist Deborah Lazar in her studio with the three pieces selected to travel to the U.S. Embassy in Cambodia. The pieces are: top left, "Wildflowers, Putney," oil on linen; top right, "Corner of Main and High Street, Brattleboro," oil on canvas; and bottom, "Day Road, Dummerston," a photo panorama composite image on canvas. 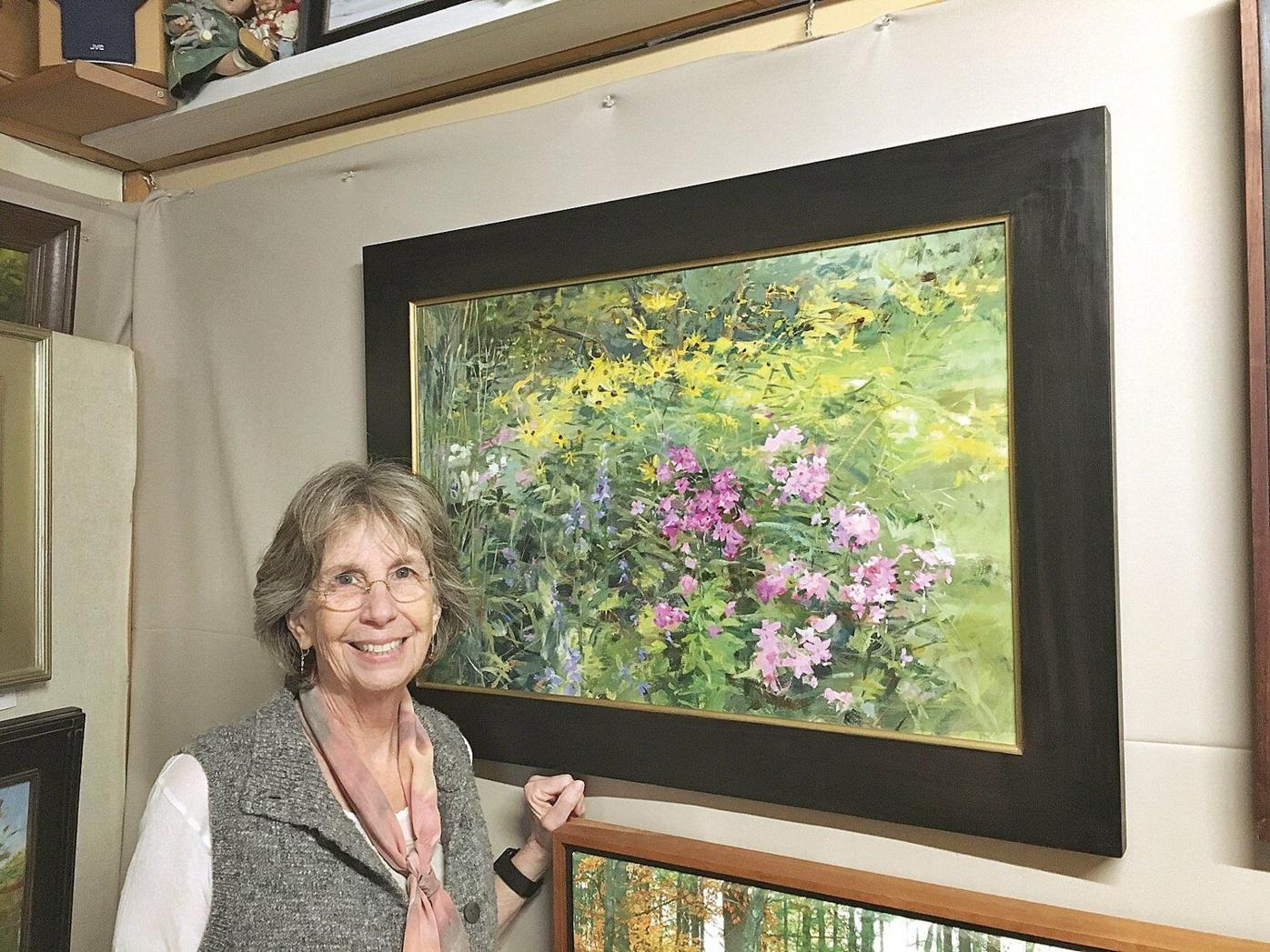 Putney artist Deborah Lazar in her studio with "Wildflowers, Putney," an oil on linen among three pieces selected to travel to the U.S. Embassy in Cambodia. 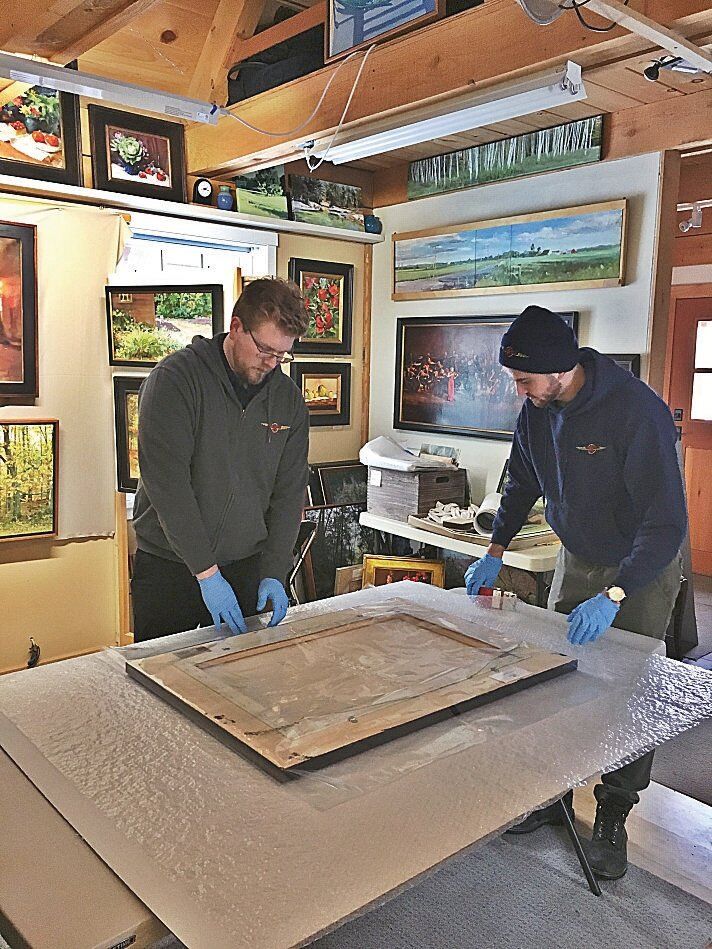 Putney artist Deborah Lazar in her studio with the three pieces selected to travel to the U.S. Embassy in Cambodia. The pieces are: top left, "Wildflowers, Putney," oil on linen; top right, "Corner of Main and High Street, Brattleboro," oil on canvas; and bottom, "Day Road, Dummerston," a photo panorama composite image on canvas.

Putney artist Deborah Lazar in her studio with "Wildflowers, Putney," an oil on linen among three pieces selected to travel to the U.S. Embassy in Cambodia.

PUTNEY — Putney artist Deborah Lazar didn't even remember applying to the Art in Embassies program when she received an email notification that two of her oil paintings and one large photo composite panel were selected.

"It feels like an award to me to have been chosen, and I hope it will open the door to more opportunities nationally and globally," Lazar said recently in her studio.

Her art is heading to the U.S. Embassy in Phnom Penh, Cambodia, where it will be displayed in the residence of the U.S. Ambassador — Vermont resident W. Patrick Murphy — for two years.

President John F. Kennedy started Art in Embassies in 1963 "to help newly appointed ambassadors choose American works of art to exhibit in the rooms of the embassy residence where they entertain and receive guests," according to the program's website. This public-private partnership brings the work of American artists to over 200 U.S. Embassies and Consulates around the world.

On a recent snowy day, two art handlers from U.S. Art Company of Randolph, Mass., arrived in a truck to collect Lazar's pieces for shipping overseas. There was a huge amount of bubble wrap, corrugated cardboard and packing tape used to wrap the artwork. The three works of art Murphy selected are: "Wildflowers, Putney," oil on linen, 28" x 33"; "Corner of Main and High Street, Brattleboro," oil on canvas, 27" x 39"; and "Day Road, Dummerston," a photo panorama composite image on canvas, 24" x 73".

Lazar said her themes are always about the natural world. She prefers to paint "en plein air" — outdoors, rather than a studio — and many of her paintings showcase the New England seasons in her garden, with paintings of flowers, landscapes and waterfalls from around Windham County.

"My style of landscape painting is also referred to as plein air painting, implying a direct observation from nature. This way of approaching painting became a style during the Impressionist movement in art," she said. She paints in an impressionist-realist style known as Alla Prima, wet-on-wet, meaning "at first attempt."

Lazar works mostly in oil paint and her impressionist-realist style is quite deliberate, "beginning with a clear idea of how I will place my subject on the canvas, and deciding what the dominant colors will be. The painting evolves like a photograph in a developing tray. Gradually as time goes by, the image takes form." Lazar has also worked in graphic design, photography and video production during her 40-plus year career.

In 2013, Lazar won the Byran Alden award for painting from the Academic Artists Association in Massachusetts and has juried into numerous plein air painting competitions across the country. In 2012, Lazar placed third in the Quick Draw Event, at Plein Air Vermont.

Lazar earned a Bachelor of Fine Arts in Studio Art at Windham College in 1975. For 12 years, she has participated in the Putney Craft Tour. She teaches individuals and groups in her studio. Recently, she attended workshops with professional artists Dave A. Santillanes, Tina Garrett and Charlie Hunter.

Murphy, the recently appointed U.S. Ambassador to Cambodia, is a career member of the Senior Foreign Service. He led the U.S. Department of State's Bureau of East Asian and Pacific Affairs 2018 to 2019. Murphy received a Bachelor of Arts from the University of Vermont and said during his confirmation hearing, "I benefitted from my upbringing in Vermont, where I was exposed to the value of public service."

When reached by email, former U.S. Ambassador and two-term Windham County state Sen. Peter Galbraith said, "The arts in embassies program displays American art — chosen by the ambassador and reflecting his or her taste and values — in the most visited place in an embassy — the ambassadors' official residence."

Galbraith said when he was ambassador to wartime Croatia, Windham County artist Wolf Kahn loaned three paintings that captured the beauty of the area.

"I am pleased that Patrick Murphy, another Windham County ambassador, has chosen to showcase the work of Deborah Lazar in Cambodia,"Galbraith wrote. "Her work captures the spirit of our home and is sure to impress and educate Cambodian guests not only about Vermont but also the diversity of our country."

Victoria Chertok is a frequent contributor to Southern Vermont Landscapes and the Brattleboro Reformer.