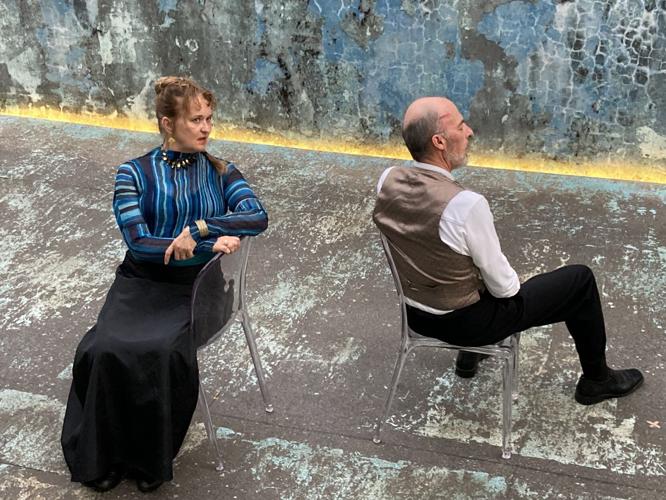 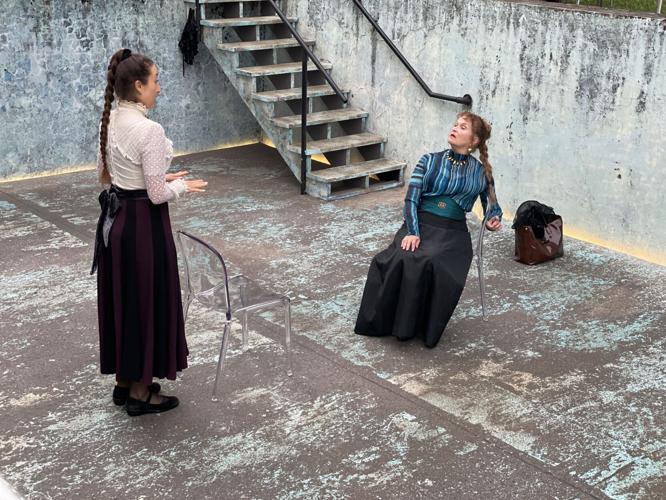 NORTH BENNINGTON — Theater in the round in an abandoned swimming pool and a mid-play move into a carriage house due to inclement weather? Some might think that only in Vermont can we find such edginess.

But the truth is, Living Room Theatre in North Bennington has been offering its eclectic audiences this type of approach for a decade.

And so the little acting troupe whose engine never quits has opened its 10th anniversary season with an outdoor presentation of Lucas Hnath’s “A Doll’s House, Part 2,” the reimagination of Henrik Ibsen’s 1873 classic, directed by Kirk Jackson.

Yes, Living Room Theatre staged it in an abandoned swimming pool, with comfortable lawn chairs in the round and smart-looking safety wire. The sublime touch? An umbrella for every audience member present, in case a sprinkle is just enough to get wet, but not enough to move into the nearby carriage house.

The play reaches back to the ending of Ibsen’s original “A Doll’s House,” but leaps forward 15 years to 1894.

There, the fate of a married Norwegian woman, Nora (Randolyn Zinn) hangs in the balance as she returns home a successful novelist seeking divorce from her husband Torvald (Allen McCullough) and reconciliation with abandoned daughter, Emmy (Gaia Visnar). Often in the background but still very much a part of the family is the elderly housekeeper, and erstwhile nanny Anne Marie (Janice Young), who has her own issues with Nora.

While Nora’s demand seems simple, we find that nothing is ever as it looks on the surface.

It’s clear that director Jackson, a stage veteran and Bennington College drama professor, has grasped playwright Hnath’s intent, as his actors look like they had picked up Ibsen’s ball without missing a beat.

With every acting credit, the young Slovenian Visnar is making her home country proud of her continued development in the New World. I’ve had the chance to watch her act over the past few years and her poise, delivery and mannerisms as Emmy were spot-on from start to finish. We hope to see more of this dynamic, radiant actor on the American stage.

Young is ageless as Anne Marie, shifting gears from quiet and demure to incensed, with the versatility one would expect from a Thespian of her long and accomplished career. Her ability to win our empathy is second to none, especially when venting her frustration to Nora at having raised Emmy as a mother by proxy.

The commanding McCullough impresses as Torvald. He walks the tightrope line between defensiveness and vulnerability in a manner so adept that, despite the play’s feminist underpinnings, his Torvald reminds us that there are always two human sides to every such story. McCullough is a master of bravado while blending in helplessness that calls out for a hand to grasp.

Finally, Zinn makes Nora her own with one word: presence. Zinn has always had an overarching talent for being the center of attention yet at the same time not drowning out the other actors on stage. This requires dexterity and competence of the highest levels in the craft, and Zinn has both in droves, all while floating across stage with the grace expected of a longtime dance, motion and acting professor.

As it were, the sky opened up halfway though the play, and everyone on hand — audience included — pitched in to move indoors, a Vermont-only scene of cooperation, joy, and well, family.

This only enhanced what was a heartfelt delivery of “A Doll’s House, Part 2,” which should be on every regional theater fan’s bucket list during this marvelous post-pandemic return of live theater to southwest Vermont.