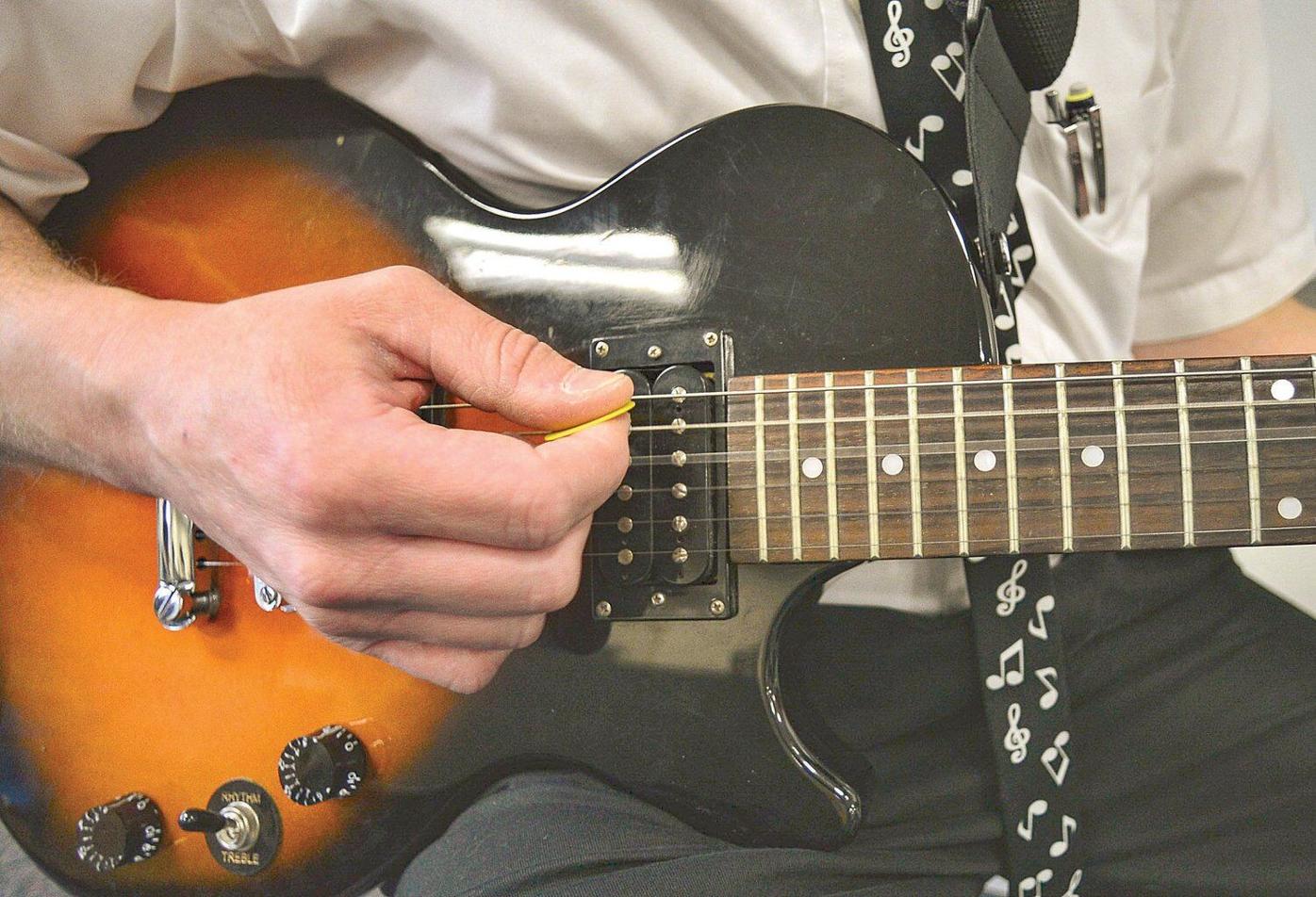 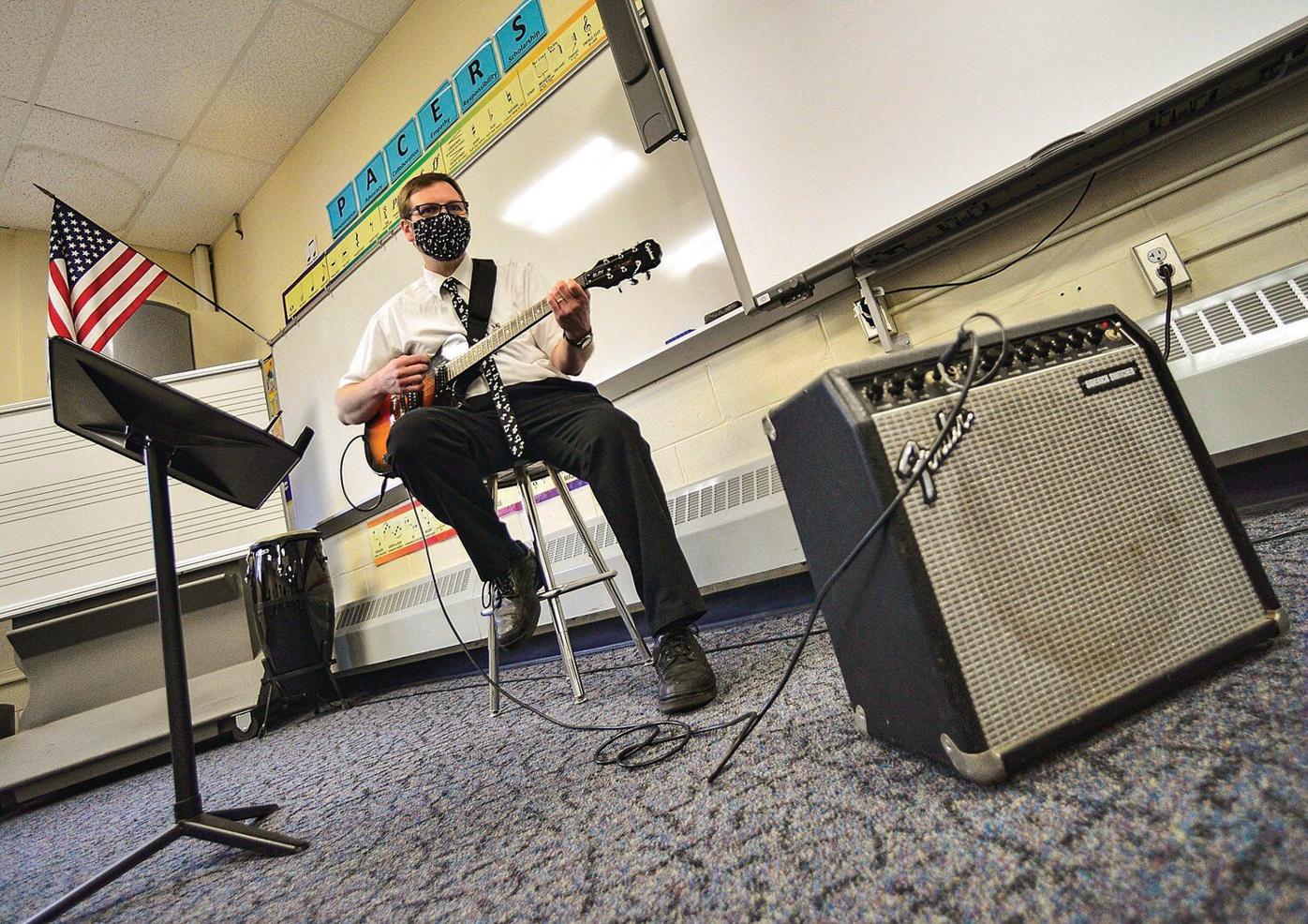 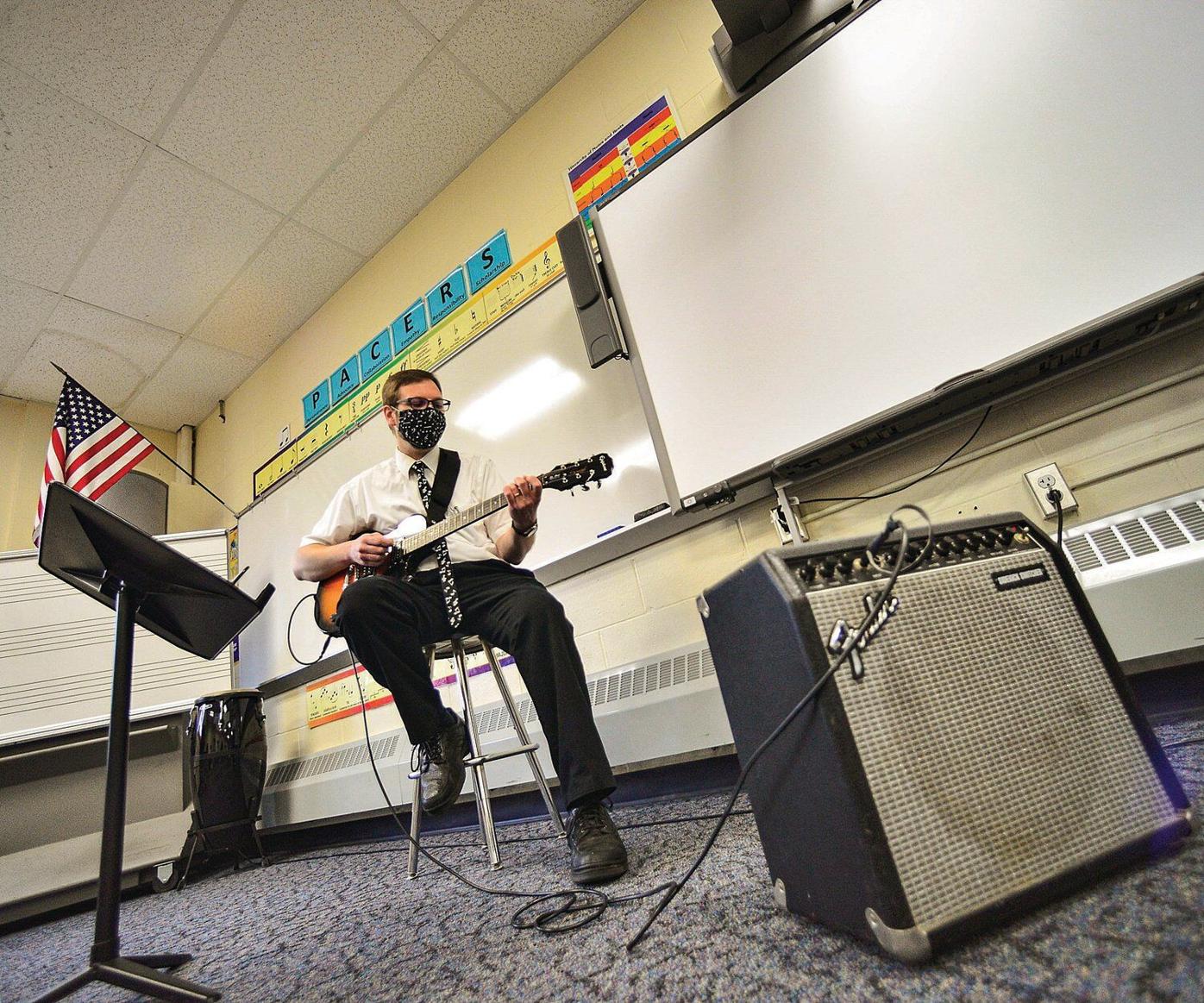 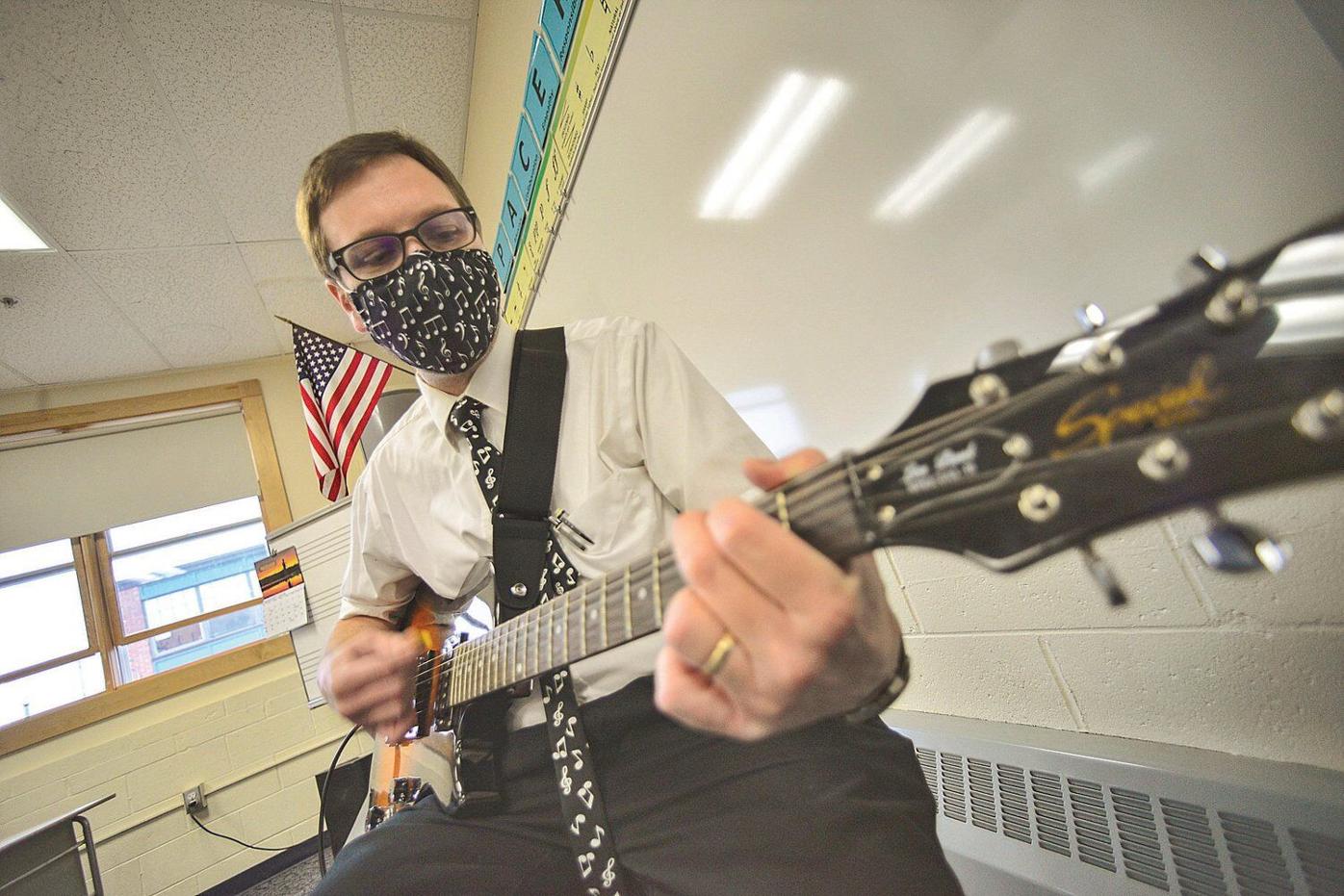 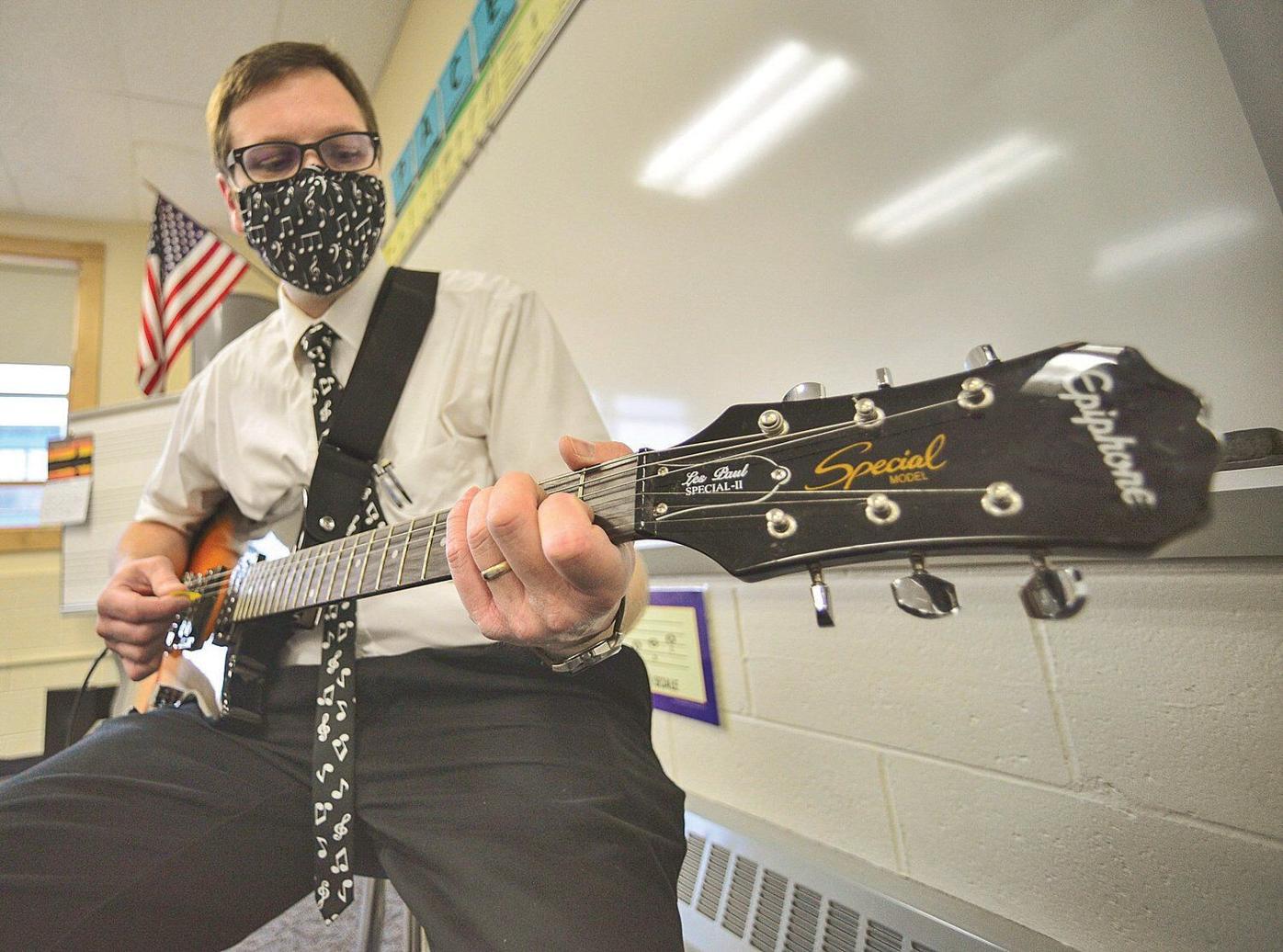 HINSDALE, N.H. — For local music teacher Matt Kennedy, receiving assistance from one of his guitar heroes to expand the music program at Hinsdale Middle High School is what music is all about.

"Carlos Santana is one of the musicians I grew up listening to," Kennedy said during a Zoom chat.

Recently, Kennedy learned the music program in Hinsdale is one of 13 in New Hampshire to be receiving assistance from Santana's Milagro Foundation and Graystone Builders Inc. as part of the Granite State's new program, New Hampshire Rocks, modeled on a national program, Little Kids Rock.

"What I like about Santana is it's not always about him," Kennedy said. "For most of his career he has been a collaborator, working with different people."

Kennedy is trying to foster a collaborative atmosphere in Hinsdale, bringing back the district's instrumental music program, which was eliminated about a decade ago.

"I like to say, we had a band that marches, but not a marching band," Kennedy said. He moved to New England with his wife, Holly, 23 years ago to teach music in Wilmington, Vt. He grew up in a musical neighborhood in Shillington, Pa., with school, his church and the band director all next door.

"I had a lot of musical opportunities growing up," he said, playing music in school and at church. "My teachers helped shape me and the direction of my career."

About 20 years ago, The Kennedys came to Hinsdale, where Matt taught music for 10 years before the instrumental music program was eliminated. He then took a job teaching music in Springfield, Vt., while his wife, Holly, was elected to the Hinsdale School Board, on which she still serves. Three years ago, Matt returned to Hinsdale to help rebuild the school's instrumental music program. Kennedy said his wife recuses herself from any school board decisions related to his job at the school.

The Milagro Foundation started collaborating with Little Kids Rock in 2002. Since that time, the organization has assisted in the musical education of more than 1 million students.

"For me, there's no greater joy than seeing the transformative powers that music can bring to a child," Santana said in a video address. "I know firsthand how it changed my life. It gave me a vocabulary and confidence to know that I am significant, meaningful and that I can make a difference in the world."

Little Kids Rock was founded in 2002 by David Wish, who started his career as an elementary school teacher in East Palo Alto, California. What began as an informal project led by a single school teacher and a handful of volunteers, according to the website of Little Kids Rock, has since evolved into a nationally recognized not-for-profit organization that has served more than one million students across the country.

Having this kind of support, Kennedy said, will make his job slightly easier this year, though all teachers are struggling with how best to reach their students during a pandemic.

"One of the elements of the program is training to use online music software known as Soundtrap," said Kennedy, a multi-instrumentalist whose primary tool of the trade is the trombone. Soundtrap provides a safe platform where students can collaborate or create music on their own. It also allows music teachers, such as Kennedy, to teach remotely.

"This is the perfect opportunity to supplement and enhance what we are doing," he said, with some students staying home for the time being and others coming to school a couple of days a week.

"We won't be able to do things like the sharing of drums," Kennedy said. "And lessons will have to be more individualized."

But Kennedy said his goal is not just to get through the next few months but to bring back to Hinsdale, "a band that marches."

Students at Hinsdale Middle High School get their instruments from a number of places. The school has some on hand, some families rent, some children get hand-me-downs from family members and some instruments are donated.

"This means that all students who want to participate have a chance," Kennedy said.

According to the N.H. Department of Education, teachers in districts across the state will receive professional learning and training in Little Kids Rock's modern band pedagogy and instruments for their school music programs.

"Modern band music programs empower teachers to use the music that kids know and love, including rock, pop, R&B, country, and hip-hop, to master music competencies," Marcia McCaffrey, arts consultant with the New Hampshire Department of Education, stated in a news release. "Through these classes, students gain musical skills that enable them to play together, compose songs together, build community, and express through music their thoughts, ideas, and emotions."